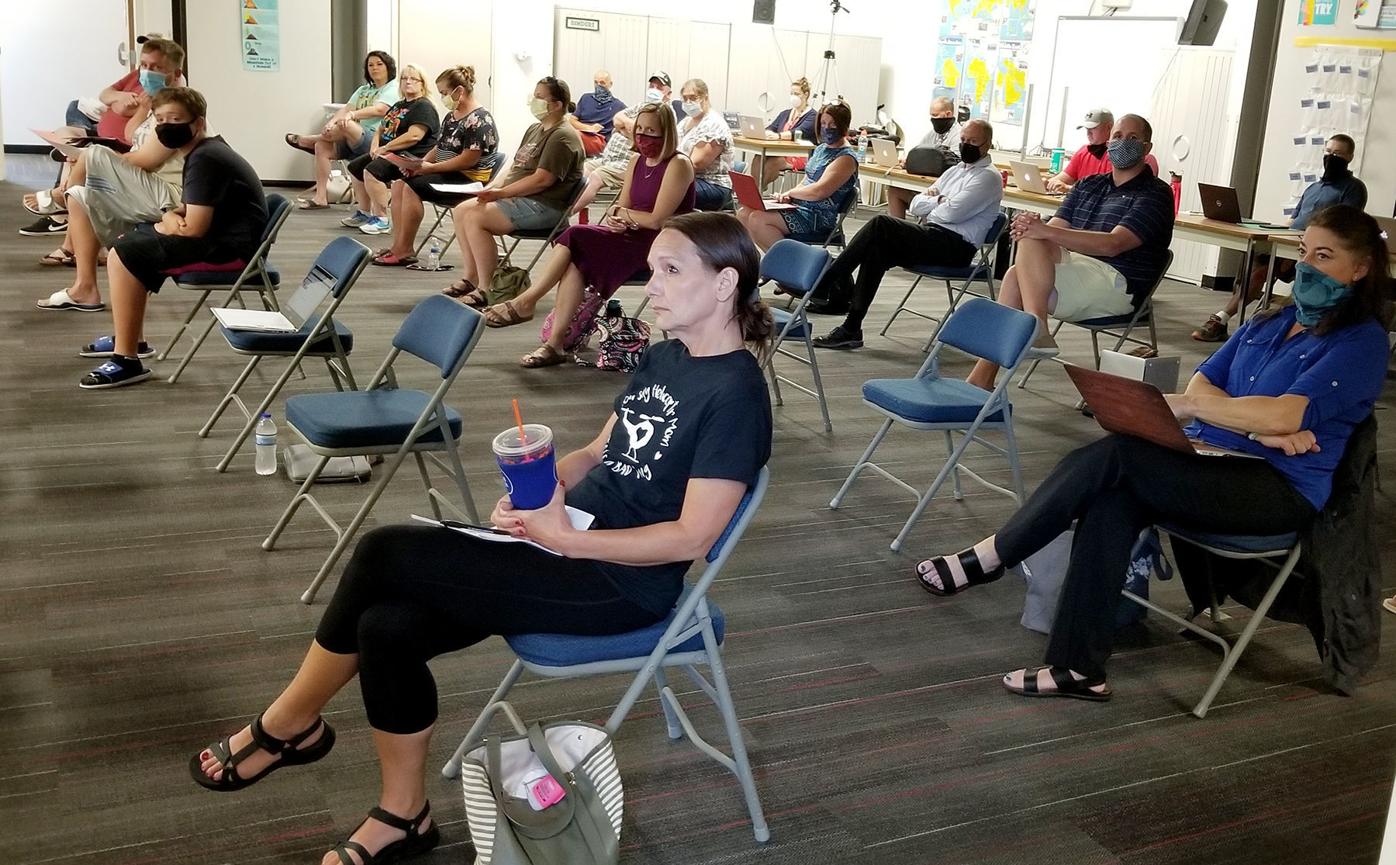 Chairs were spaced apart from one another in the school district office building at a school board meeting where board members decided what to do about returning to school in fall.

Monday’s school board was held at the district office building were school board members sat at individual tables. From left is Dave Holterman, Brian Kvapil, Michael Hoffman, Diamond McKenna and Joe Martin. Not pictured but present were Rick Mullen and Shelly Crull-Hanke. 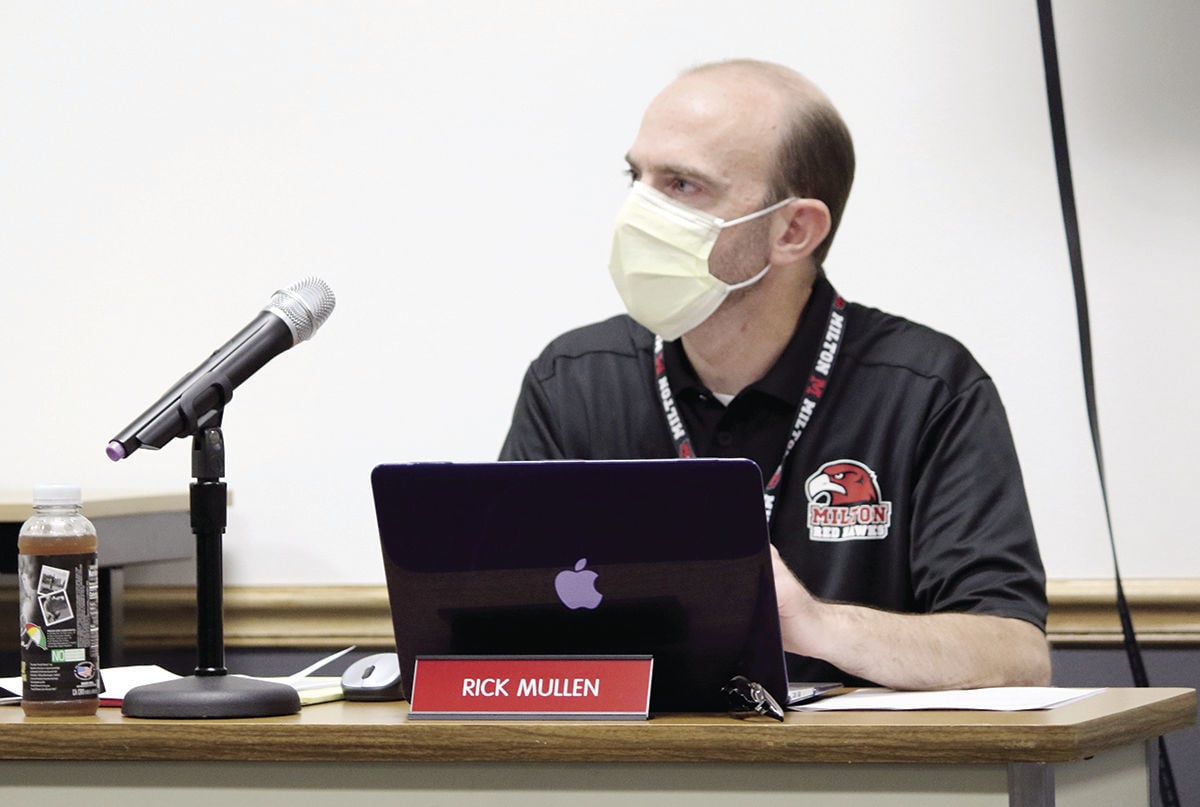 Chairs were spaced apart from one another in the school district office building at a school board meeting where board members decided what to do about returning to school in fall.

Monday’s school board was held at the district office building were school board members sat at individual tables. From left is Dave Holterman, Brian Kvapil, Michael Hoffman, Diamond McKenna and Joe Martin. Not pictured but present were Rick Mullen and Shelly Crull-Hanke.

Editor's note: This is a lengthier version of the original story posted online. Additional discussion has been added to the story.

Milton School District students will be heading back to school buildings in fall – if they and their parents want them to. Virtual learning will be offered as an option for all grade levels.

With a 5-2 vote Monday, the school board approved a plan, which Superintendent Rich Dahman described as a starting point with more details to be filled in. He said the plan is flexible and subject to change.

In-person instructional models in the “Milton Forward: Instructional and Building Reopening Plan for 2020-2021” are different for grades 4K-6 than they are for grades 7-12.

Grades 4K-6 will return to school five days a week. Students, in smaller groups, will be assigned one primary homeroom teacher. Students will remain “static” throughout the day, as much as possible in their homeroom.

“As we talked about 4K-6 grade, one of our biggest goals was bringing those students back on full-time,” said Ryan Ruggles, director of curriculum and instruction.

“We believe that it is important that our youngest students meet in person daily,” stated a Milton Forward Powerpoint. “Virtual learning is not easy for younger students and typically requires more assistance from parents. Families also have the challenge of returning to work and arranging daycare for young children.”

Grades 7-12 will start the year in blended hybrid model. Students will be assigned to A or B cohorts, based on last name. A and B will alternate days with in-person lessons one day and virtual lessons the other.

Once a week all students will be dismissed early to allow for teacher planning.

How can we limit the risk for our students, staff, families and communities so that we can return students to school in a manner that keeps them as safe as possible?

How can we balance that need with limiting that risk as much as possible with that equally strong need to provide a high quality education for all students?

Virtual instruction will be “synchronous” (in “real time” with teachers) and “asynchronous” (not at the same time, meaning students work on their own).

School board members Brian Kvapil and Diamond McKenna voted against the reopening plan.

She added, “No way (and I was a straight A student) do I think I would have been successful in seventh grade managing half my schooling on my own from home.”

Dahman responded saying, “It would incredibly difficult for us to socially distance at the high school if every student was there every day. When districts described a plan similar to that to Rock County Public Health, their response was, ‘That’s a recipe for disaster.’”

If the county is in Phase 3 of its reopening guidelines, he said, “then I think it would be safe for us to bring more students back.”

Kvapil too expressed concern about middle and high school students learning online every other day and suggested it could stunt their educational growth.

He questioned why temperatures of staff and students won’t be taken at school.

Dahman said both staff and students are going to be required to self-screen, which means temperatures need to be taken at home.He said he would rather people not come to work sick.

“What about the students though?” Kvapil asked. “To say that we’re going to have the students and possibly their parents self-screen, that’s not a mitigation strategy at all.”

McKenna said, “If we can expect our students to self-teach, why shouldn’t we expect them to self-screen?”

Dahman responded, “We aren’t actually expecting either of those things. We definitely are not expecting our students to self-teach. I think that’s a gross mischaracterization of what we’ll be doing with students, and it’s disrespectful to our staff to imply that that’s the case.”

McKenna countered: “We were told that on days the high school kids are at home that will be learning on their own.”

Dahman said if the board wants student temperatures taken, the district will do that.

“I’m telling you that in our study of the issue, we found it to be extremely impractical,” he said.

School board president Joe Martin said discussion in the next six weeks will be about what pieces does the board want to add to the plan.

One of the questions Martin has is where will the district find substitute teachers.

“I would hope we can get started and add to this as we move forward,” he said.

Surveys in spring and summer to parents and staff helped inform the planning process, Ruggles said.

“We’re really impressed by the number of responses and the thought people put into sharing information with us,” Dahman said. “It’s really valuable for us to know what people are thinking, what their viewpoints are.”

The plan allows us to have more in-depth communication with families and staff about how to best move forward, Dahman said.

“We’ll be able to find out from families – are you planning to send your child to school on site or have them take part virtually?” he said.

Next steps for the school district include determining which students opt to do virtual learning only by delivering a virtual learning sign up to families via email. From there, “cohort” groups can be assigned.

The district also will need to look at transportation.

“We would encourage families to provide their own transportation if possible because that lessens the number of students on buses,” Dahman said during an interview with the Milton Courier Monday afternoon. “We also know that’s not a possibility for every family.”

School board member Michael Hoffman asked if one student per bus seat would be possible.

Dahman said yes for 4K-6th grade and noted the number of kids needing transportation would determine the number of bus routes needed.

On Monday the county was in Phase 2 and the school district’s plan “Milton Forward” assumes the county is still in Phase 2 about two months from now.

“We understand that what we’re putting together isn’t something that we’re going to be tied to for a considerable amount of time if the situation changes,” he said.

If a major outbreak occurs or the county returns to Phase 1, all grades would move to virtual learning.

If the county advances to Phase 3, all students would return to a regular school schedule. Virtual learning would continue to be an option. “There’s still plenty of uncertainty for when the school year starts this fall,” said Dahman.

He acknowledged there are competing messages about COVID-19.

“Rather than us trying to wade through them,” he said, “we listen to national, state and local health officials and put a lot of weight into their recommendations.”

BACK TO SCHOOL: Details of Milton Forward yet to be determined

BACK TO SCHOOL: What will determine if a school must close?

Assumptions (about instruction) used for planning:

Face-to-face, onsite instruction is the most preferable environment for our students.

Our instructional model should allow students to move between in-person and virtual learning environments should the county recommendations change.

What does DPI say?

On June 22 the Wisconsin Department of Public Instruction released "Education Forward: Reopening Wisconsin Schools" as a guide to support Wisconsin school districts in their planning and decision making. The document provided guidelines, but does not issue mandates or specific requirements, other than reference to already established requirements per state statute.

According to the Wisconsin DPI, a statewide mandate was not advisable as each county’s experience with COVID-19 is different.

Each district is encouraged to work closely with their local health department to create their own instructional learning model that best fit their community’s unique needs.

Source: July 13 memo from Milton Superintendent Rich Dahman and Director of Curriculum and Instruction Ryan Ruggles to school board

Some of the safety measures in the Milton Forward plan include:

Staggered drop off, pick up times

Self-screening for symptoms prior to arrival

BACK TO SCHOOL: Virtual Learning 2.0