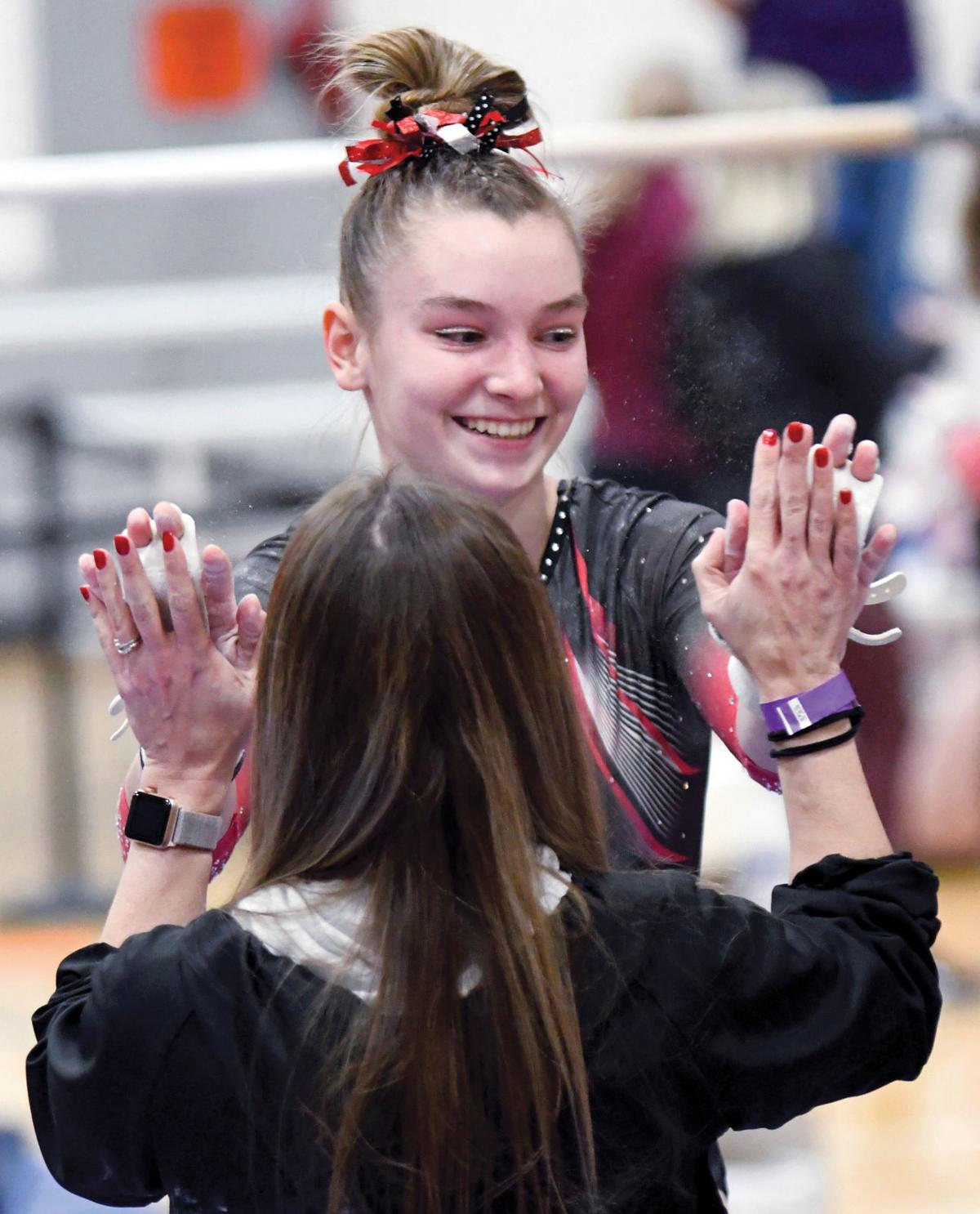 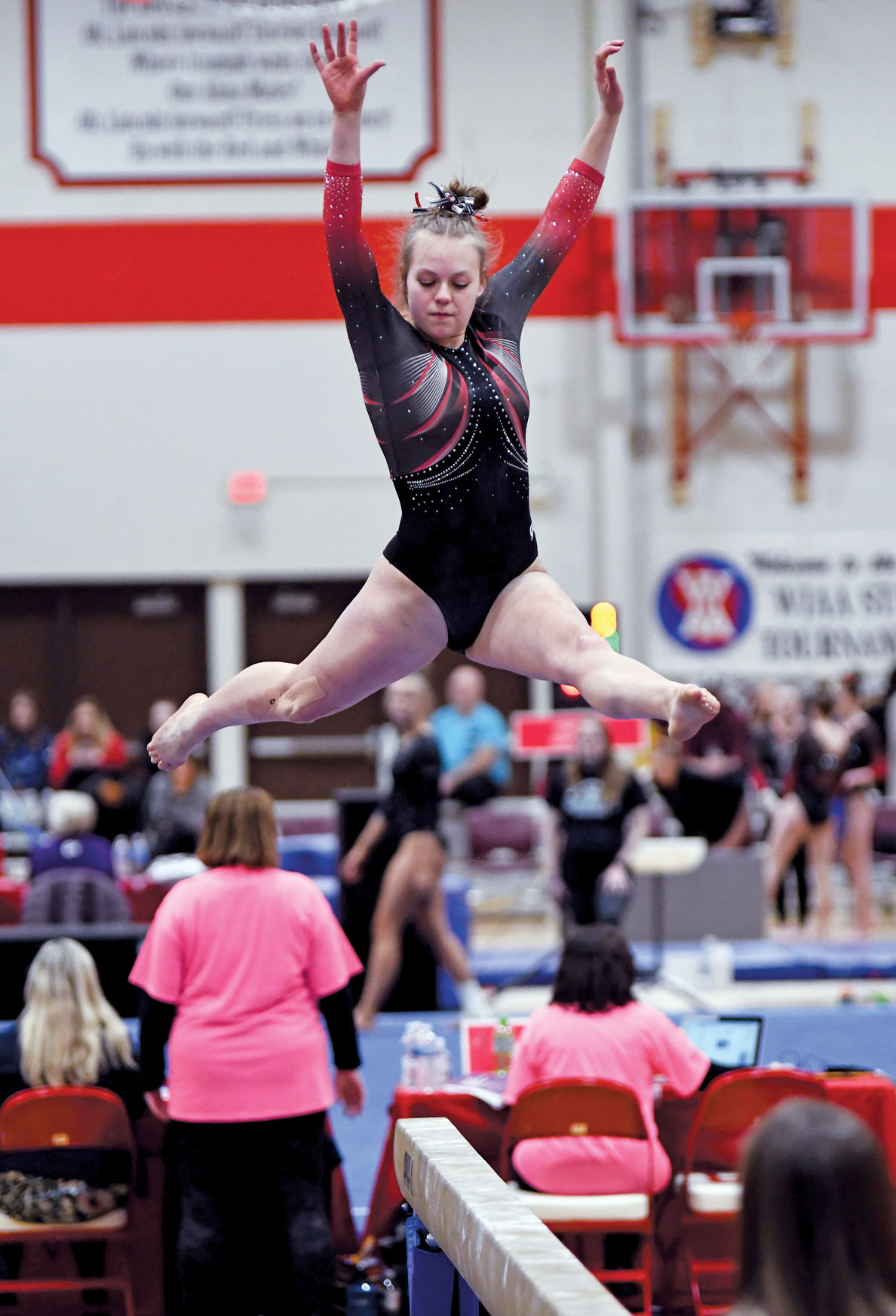 Senior Caroline Burki led Milton off with an 8.933 on the balance beam at the WIAA Division 1 state team gymnastics meet Friday, March 6, in Wisconsin Rapids. 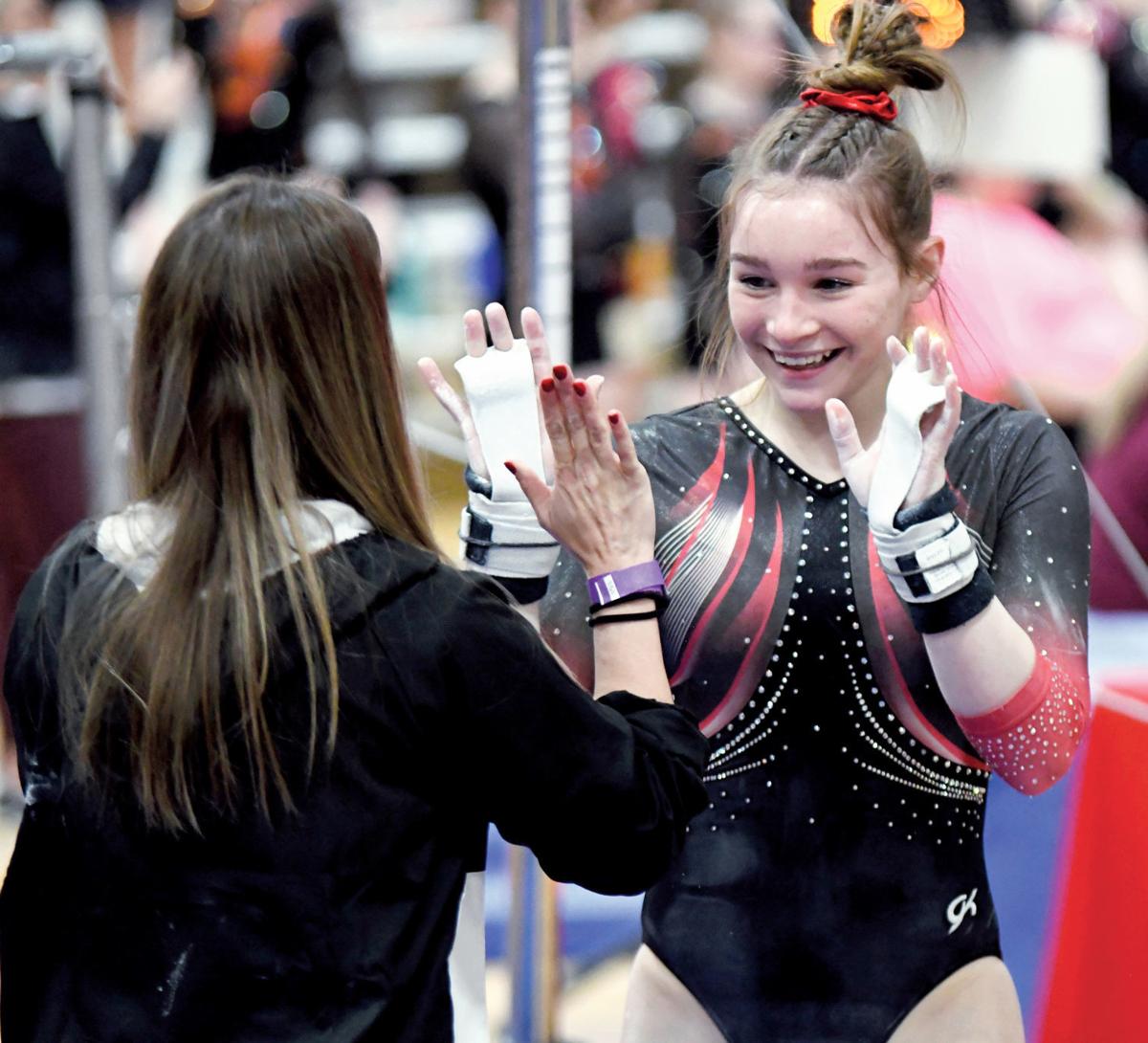 Sophomore Brooke Girard goes to give a coach a high-five at the WIAA Division 1 state team gymnastics meet Friday, March 6, in Wisconsin Rapids. 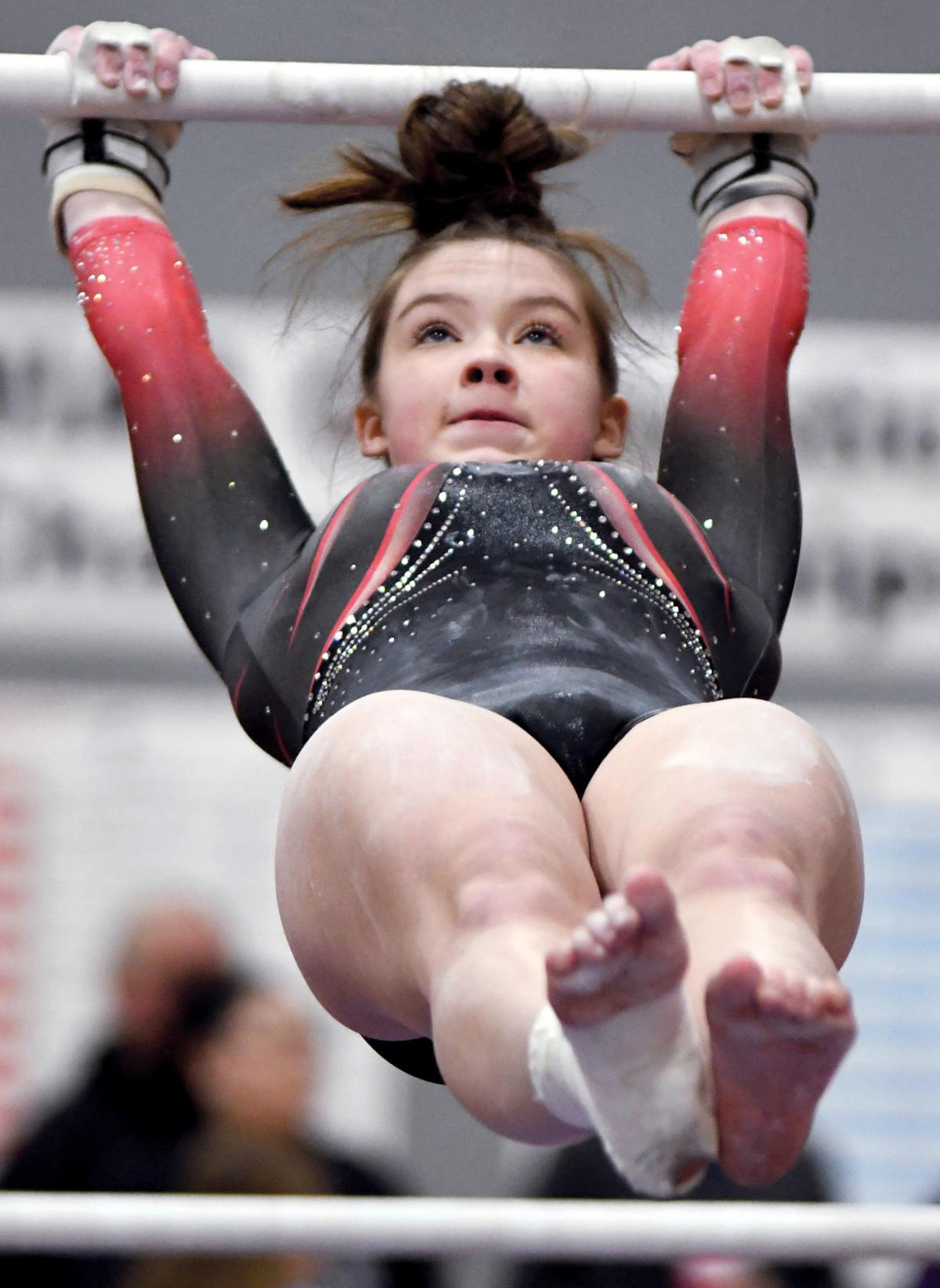 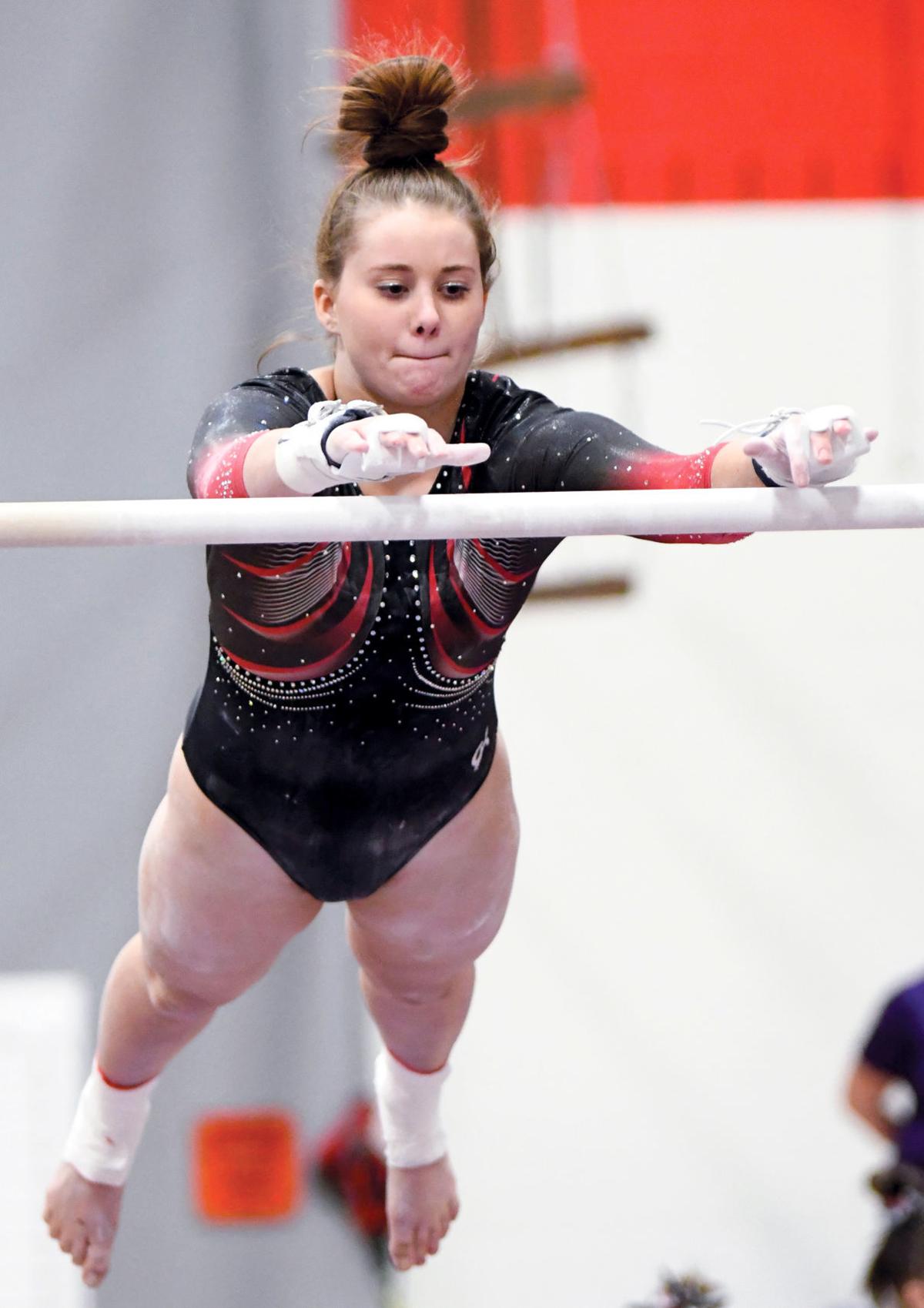 Senior Caroline Burki led Milton off with an 8.933 on the balance beam at the WIAA Division 1 state team gymnastics meet Friday, March 6, in Wisconsin Rapids.

Sophomore Brooke Girard goes to give a coach a high-five at the WIAA Division 1 state team gymnastics meet Friday, March 6, in Wisconsin Rapids.

The Milton/Edgerton gymnastics team nearly saved its best for last.

The Red Hawks scored 138.967 — just shy of Milton’s season-high score of 139 — which was the fourth-best score in program history.

“Me and the other coaches were talking on the way home how we couldn’t have been more proud of these girls and how they handled the pressure of being at the state meet,” Milton head coach Kristine Farnsworth said. “It was a true team effort the whole day. It was an amazing way to cap off the season.”

The Red Hawks recorded their best team score on the balance beam with a 36.133. Sophomore Ireland Olstad led the way with a team-high score of 9.45.

Despite Olstad collecting the top score on the team, Farnsworth was quick to give credit to senior Caroline Burki for setting the tone.

“She (Burki) led us out on beam. She likes to go first and not wait and think about things,” Farnsworth said. “We’ve always put her in that first spot. She handled that role perfectly. That was awesome for her to lead us out in that event.”

Burki scored an 8.933, while freshman Hannah Dunk finished with an 8.967. Junior Josie Hasenstab rounded out the scoring with an 8.783 and sophomore Brooke Girard ended with a 7.333.

“Super happy for her (Burki). I know a few of her teammates had a couple tears in their eyes when she got done, knowing it was her last floor she would compete in,” Farnsworth said. “It was extremely rewarding to see her lead the team in that event.”

“Brooke really came along and had a really solid day,” Farnsworth said. “Excited she was able to have a good day as well.”

Of the 20 spots filled for Milton among the four events, only five were occupied by seniors.

“We’re excited for next season,” Farnsworth said. “I think it (going to state) put a little fuel in their fire and has them motivated.”