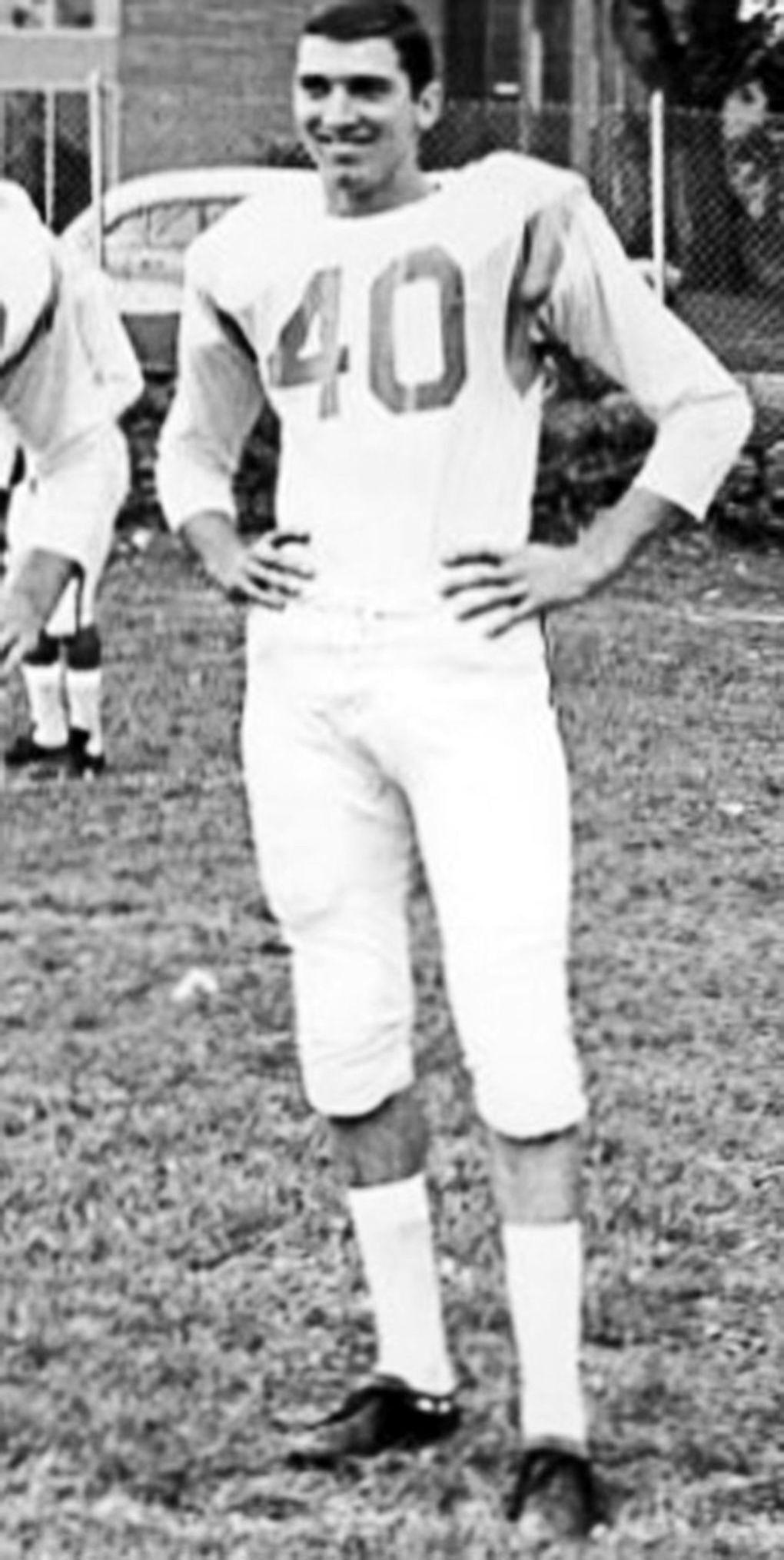 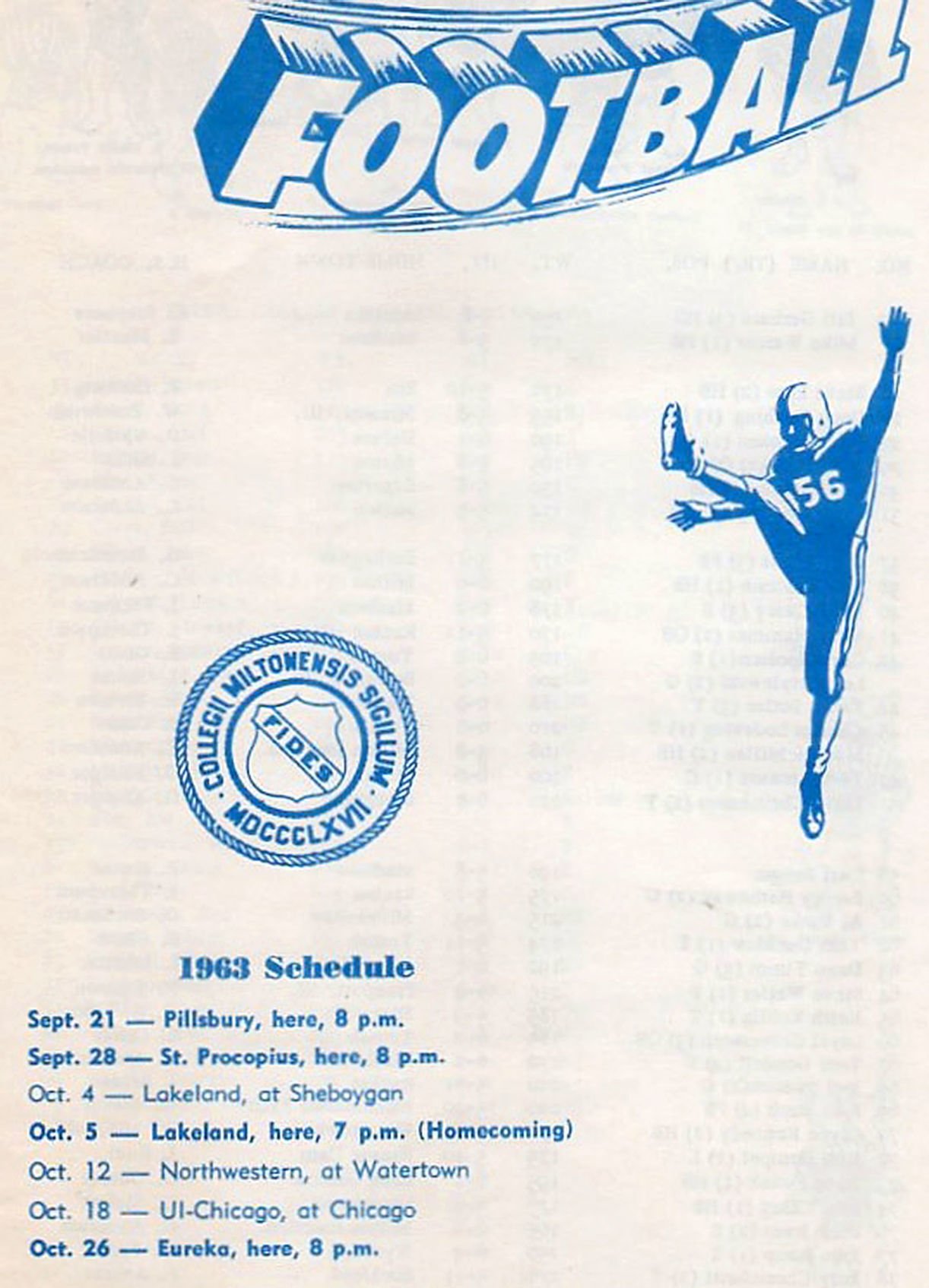 The cover of the gameday program for the Milton College homecoming game in 1963 reflected the fact Milton played at Sheboygan against Lakeland College on Friday, October 4 and then hosted the Muskies on Saturday, October 5.

The cover of the gameday program for the Milton College homecoming game in 1963 reflected the fact Milton played at Sheboygan against Lakeland College on Friday, October 4 and then hosted the Muskies on Saturday, October 5.

Much like all collegiate football programs, Milton College had its share of quirky happenings during its 81-year existence that ended with the unfortunate closing of the school in the spring of 1982. In the early days there were wagon rides to Albion Academy, players with homemade protective gear, games against high school teams, and, until the 1920s, student-coached teams.

One of the quirkiest moments in Milton College football occurred much later in the program’s history, Oct. 4-5, 1963, when the Wildcats played two homecoming games on successive nights against Lakeland College.

Certainly, very few collegiate football programs can lay claim to having to play two games on a weekend as did Milton and Lakeland colleges 58 years ago next month.

In 1963, a Gateway Conference scheduling gaffe resulted in the Wildcats and Muskies planning homecoming festivities around games that administrators from each school assumed they’d be hosting. The football schedules received by each school showed it to be hosting the other school on Oct. 5. Just how each school received a schedule different from the other is anyone’s guess.

Conference teams generally rotated home field from year-to-year. In 1962, the Wildcats lost to Lakeland in Sheboygan, so Milton coaches and administrators had no reason to question whether it was Milton’s turn to host the Muskies in 1963.

A mid-season game against a conference rival made the Oct. 5 date a natural for each school to schedule their homecoming festivities. That’s exactly what each school did only to realize the conflict as late as the last week in September. Needless to say, officials from Milton, Lakeland, and the Gateway Conference were sent scrambling to find a solution.

That solution turned out to be as unpredictable and surprising as the advent of the dilemma itself. It was resolved that the teams would square off against one another twice on successive nights. In an unusual “Home-and-Home Homecoming,” Milton would travel to Lakeland for an evening game Friday, Oct. 4, and then host Lakeland the following evening in Milton.

The Sheboygan Press was the first newspaper to report the scheduling conflict in its Wednesday, Sept. 25 edition.

Mike Casey, a junior wide receiver and defensive back for the Wildcats in 1963, said the players were as surprised as anyone by the sudden turn of events.

“All most of the players knew was that both of the college’s ADs (athletic directors) had scheduled home games on that date,” Casey said. “And they were both to be homecoming. So it was just a bad breakdown in communication.”

That breakdown led to a hastily-called meeting of Milton College Athletic Director Red Oberbruner, Lakeland AD Bob Griggas and officials from the Gateway Conference in Milwaukee on Sept. 24—just 10 days prior to the scheduled homecoming festivities for each team.

Statistics were to be averaged over the two games. For instance, if a running back gained 50 yards in the first game and 100 in the second, he would be credited for 75 yards rushing for the cumulative Gateway statistics.

The only game-related change agreed upon was that the quarters would be shortened from 15 minutes each to 12 minutes.

Carl Nelson succeeded Red Oberbruner as head coach of the Wildcats in 1962 and was in his second year at Milton after coaching at Beloit College for a number of years which included an unbeaten 1952 season. Nelson had moved the Wildcat football program forward by emphasizing a passing-friendly “pro set” offense.

The ’62 season was a huge success and, with Loyal Grovesteen under center, marked the beginnings of the program’s “Great Quarterback Era.”

Grovesteen set every school passing mark during his three years as Milton’s starting quarterback. All of those marks were surpassed by Grovesteen’s younger brother, Ron, a four-year starter beginning in 1965. The Grovesteens were succeeded under center by such names as Joe Grafenauer, Brian Bliese and 19-year NFL star Dave Krieg.

Milton’s only conference loss in 1962 came at the hands of Lakeland, with the two schools sharing the Gateway Conference title. Long before the unique double-header came up, both teams had already circled the game on the schedule as being pivotal for the 1963 conference race.

It was the third game of the season for each school. Milton dominated its first two non-conference opponents, beating Pillsbury College of Owatona, Minnesota, 67-0, and St. Procopius, 26-0.

The Muskies came into the weekend needing a win after having lost their first two games by big scores.

According to Casey, Coach Nelson—who passed away in 2014—didn’t do anything different to have his team prepare for the two games.

“We were prepared to play those games with the same plan,” Casey said. “We were coached back then on strong basics—blocking, tackling, execution and being the best-conditioned team.”

It was the Muskies who dominated the late-going of the first game in Sheboygan on Friday night. Milton held a 7-6 lead at halftime on the strength of a 7-yard run by Dave Novak, capping a 67-yard drive late in the first period.

But Lakeland erupted for three fourth-period touchdowns to win, 25-13.

Lakeland’s Al Zipperer, a Manitowoc native who caught a touchdown pass in the first half, returned a punt for 76 yards for one fourth-quarter score and ran 48 yards for another. The Milton offense managed 108 total yards and six first downs. The Muskies finished with 237 total yards

For the Wildcats, the loss elevated the importance of the second game. It was a game the Wildcats knew they had to win just to salvage a tie in the conference standings.

“It was a long bus ride to Sheboygan Friday and, after getting beat. It was an even longer ride home to Milton,” Casey said. “We were all beat up and tired and were not looking forward to another game on Saturday.

“We got back well after midnight and a few of us had a few beers at the frat house and hit the sack, not looking forward to another game in a few more hours.”

Saturday’s game on Milton’s Campus Field was the war of attrition one would expect from two teams playing their second game in as many days.

But the game was basically decided on the first play from scrimmage when Milton’s John Casey, a freshman from Shorewood and no relation to Mike, took off on a 75-yard gallop to score the only points of the game.

“The second half showed Milton’s defensive skills off to the homecoming crowd. Lakeland was often within reach of a score but the Cats held off numerous Muskie drives. Lakeland put on a march in the closing minutes of the game, but Jim Anderson intercepted Gary Richert’s pass with 1:07 left to play to stop the Muskies. ... It was a hard-fought victory for the Wildcats and one they can certainly be proud of.”

“It was a defensive battle,” Mike Casey recalled. “For me it seemed like forever because I played both ways. The homecoming dance was a blur. I had a great date, an after-party at the frat house and a long sleep-in on Sunday.”

The team that most-benefitted from the double dip, arguably, was the University of Illinois-Chicago. At the end of the weekend, UI-C led the Gateway Conference with a 2-0 record while Milton and Lakeland were tied for second with records of 0-0-1. That’s exactly how the standings shook out at the end of the year.

UI-C won the conference and Milton and Lakeland finished tied for second with records of 2-1-1. Milton finished the season with an overall record of 5-2-1.

The unique football double-header gained state-wide and national attention. Sports Illustrated made mention of the games in one of its October 1963 issues.

“All-in-all it was nice to be a part of small-college football history,” Casey said. “It’s something I’ll never forget.”