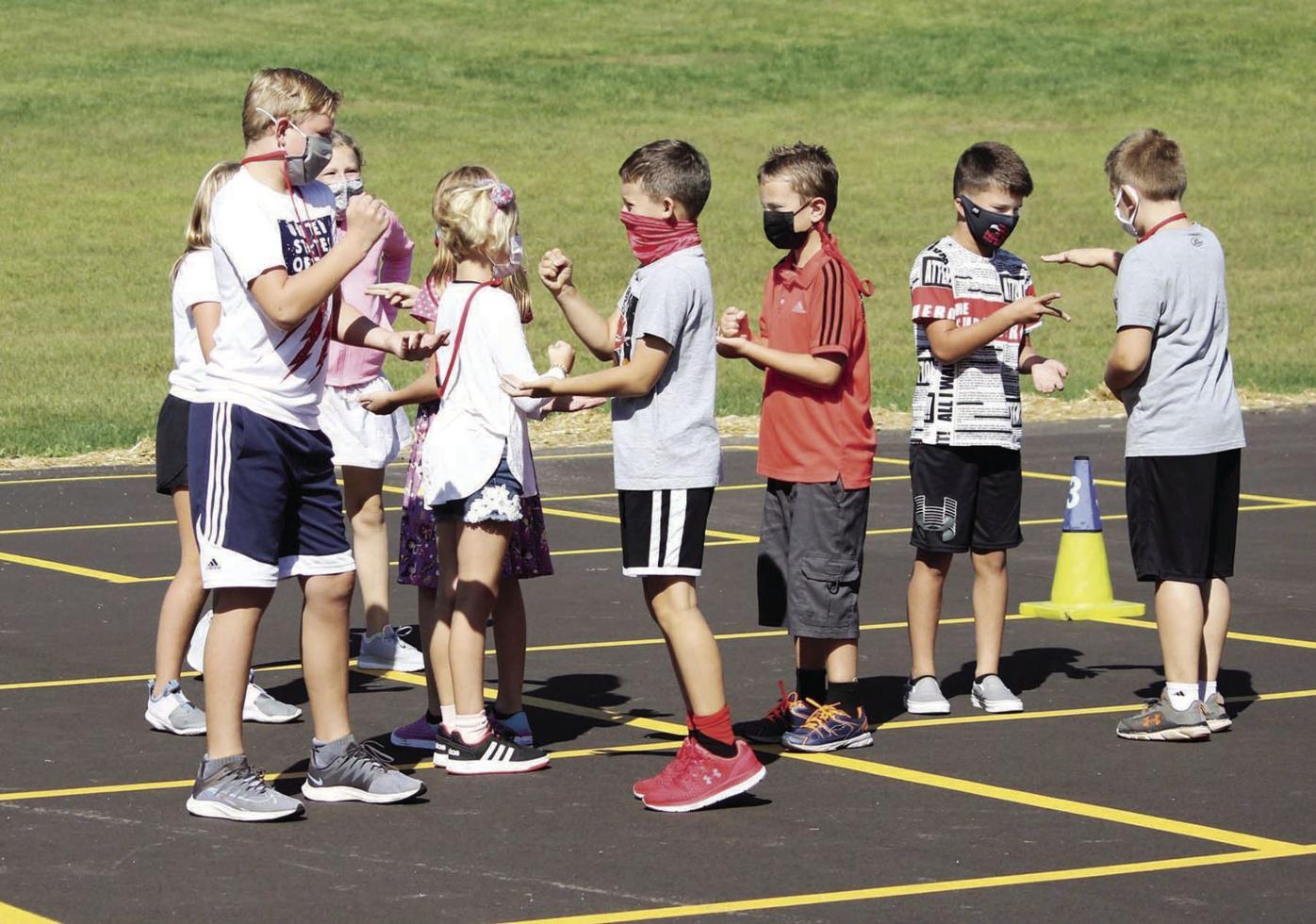 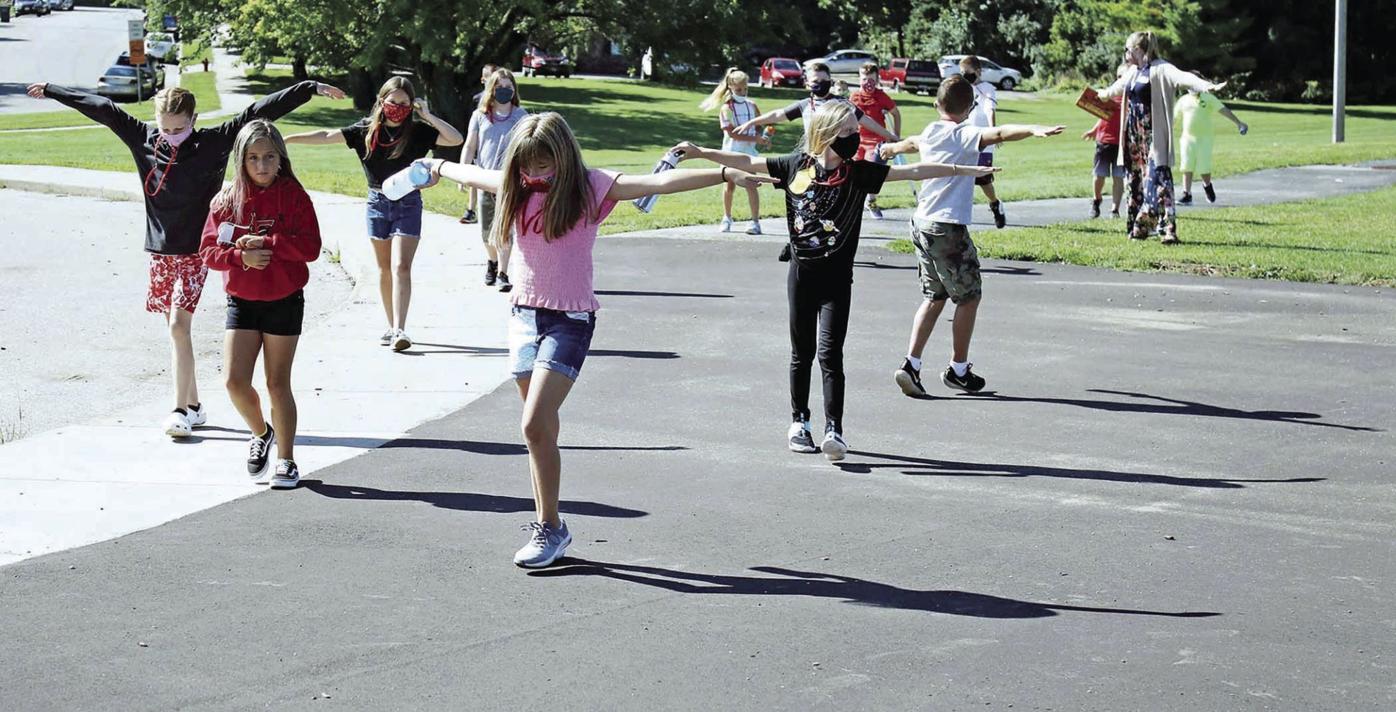 Students of fifth-grade teacher Stacy Shever stretch out their arms to show their wingspan and how far apart from one another they should be.

Students of fifth-grade teacher Stacy Shever stretch out their arms to show their wingspan and how far apart from one another they should be.

Looking happy while wearing a mask isn’t necessarily easy – unless the sun is shining and you’re outside playing a game that involves Rock, Paper, Scissors.

It was Day 2 of a new school year at Northside Intermediate and the second day of in-person learning since March 16. The 2019-20 school year ended with school buildings closed statewide, part of the state’s efforts to contain the spread of COVID-19.

Today schools, though not all, are open and face coverings are mandated by the state until the end of the month.

Students are expected to wear a face covering upon entering school and while in the classroom.

They are permitted to take them off during snack, lunch and phy ed with physical distancing measures in place.

Walking around the building and inside, Principal Jon Lyon showed the Milton Courier what school looks like in fall 2020.

“If we’re outdoors and 6 feet apart, our face coverings are off, and if we’re not, they’re on,” he said.

Additional breaks are being taken during the first weeks of school to acclimate students and staff to wearing face coverings.

Lyon said face coverings for students are not a source of controversy, as they have been for adults.

“The first day of school every child remembered to wear a face mask,” he said. “They’re doing a great job of wearing it high and tight, or covering their “beak,” as we like to say here.”

On the second say, he said about 10 students had forgotten a face covering.

Students outside for phy ed were wearing face coverings because they were moving around within 6 feet of one another. Phy ed is 30 minutes each day (not once every three days) and outdoors as much as possible.

Recess is structured – instead of an entire grade level with maybe 250 students going out for recess, three or four cohorts go out at a time.

Each grade has a designated area (“the hill,” “the grassy knoll” and “the grove area”).

As one class came outside for a face covering (or mask) break, a student, taking off his mask, said, “It seems strange – not – to wear a mask.”

While they walked to the track, geese flew overhead.

Students, too, have been spreading their “wings.” With outstretched arms, they measure and remind one another to keep a physical distance of 6 feet.

Lyon said he has been impressed with how students have been following Northside’s three Ws: wearing a face covering, washing hands often and watching their “wingspan.”

As Lyon headed back into the building, three girls asked, “Can we bring birthday treats?”

Even if they are prepackaged, he said the answer unfortunately at this time is no.

If everyone wasn’t wearing a face covering, it would be more difficult to remember steps were being taken to minimize the spread of the coronavirus, making the start of this school year like no other.

Northside Intermediate has more than 700 students in grades 4-6, who were given the option of in-person learning or Virtual Learning 2.0, which administrators describe as an improved version of the virtual learning that took place in spring.

For Virtual Learning 2.0, there are two teachers per grade level, one lead teacher for reading and writing and another for math and science.

In-person instruction is done in teams of two or three teachers. One teacher focuses on reading and writing, and the other math, science and social studies. In teams of three, a third teacher teaches “the explorer block,” which includes social studies and related arts lessons (music, art, current events).

Rather than students moving from room to room, teachers move.

Class sizes are based on the square footage of the classroom.

In the classrooms, desks are 6 feet apart and backpacks and water bottles are on the floor nearby.

In hallways, lockers and drinking fountains are not being used. Water bottle stations are.

Desks, tables, chairs have been removed from classrooms and are being stored in the room that usually is used for large gatherings, which at this time are not allowed.

When students come in from outside, teachers dispense soap into students’ hands. Handwashing is takes place at sinks in the hall or outside the bathroom.

At Northside, lunch is eaten in the classroom. Nutrition team members deliver hot lunch for teachers to distribute. Meal containers and utensils are disposable.

“A couple children remarked that they enjoy having lunch in the classroom because it’s like room service,” he said.

All in all, Lyon said the students have adjusted well and are excited to see one another.

When students who had Lyon as a principal at Harmony or Consolidated elementary school, see him at Northside, they sometimes want to give him a hug.

“It has been a little hard to remind kids that – no, we’re supposed to be watching our ‘wingspan,’” he said. “So I do the elbow thing or just kind of wave or do the air fist bump. That has been probably just the hardest part for staff and students is maintaining that physical distance as much as we can during the day.”

But he has faith students will adapt.

“We have to coach and teach the idea of ‘watching our wingspan,’ we’re waiting and walking 6 feet apart,” he said.

Beginning his ninth year in Milton School District, Lyon said, “I know our staff here is committed to providing the best for our students. As long as we keep the students in the forefront and what’s going to be best for them, I think the community is going to be well-served.”