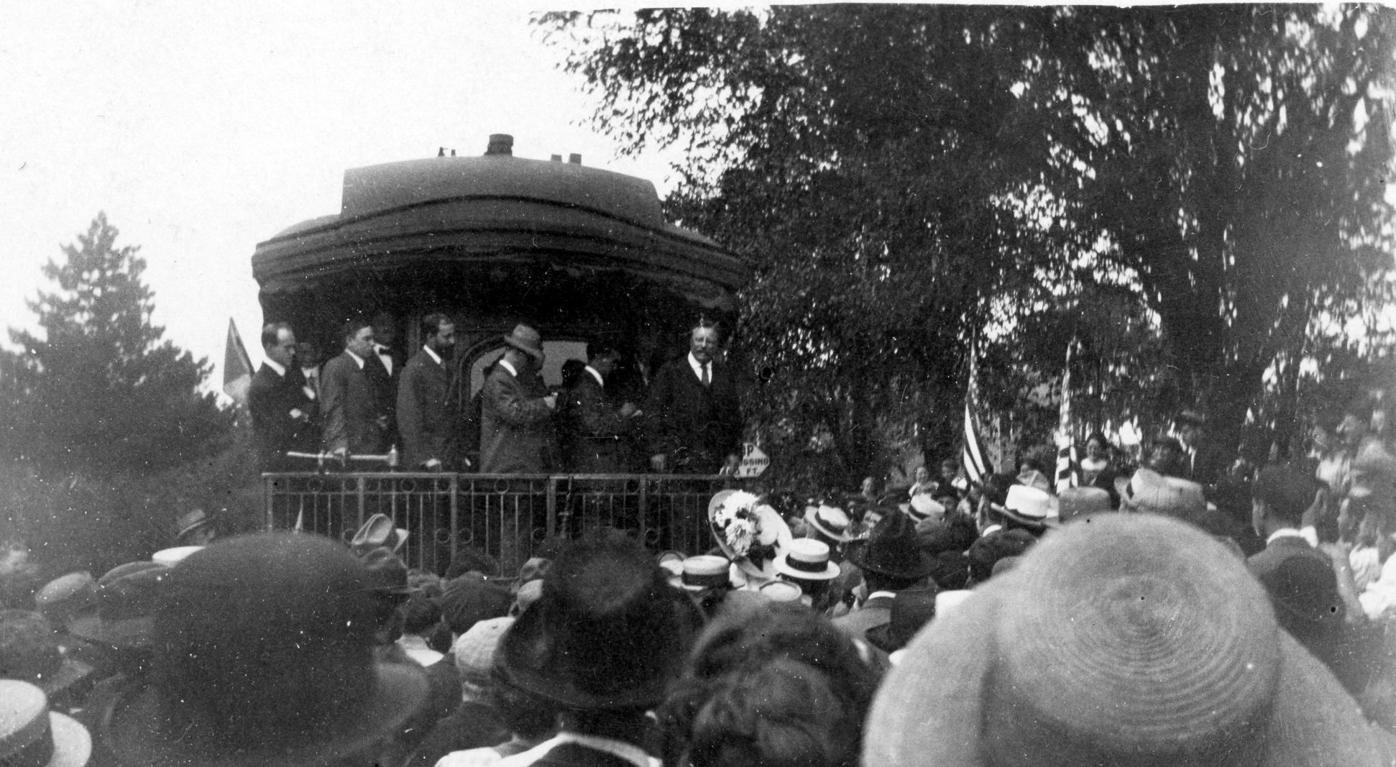 Former President Theodore Roosevelt stands at the back of a train during a whistlestop in Milton Junction in September 1910.

Crowds gathered in Milton Junction in September 1910 as former President Theodore Roosevelt made a whistlestop in the small community. 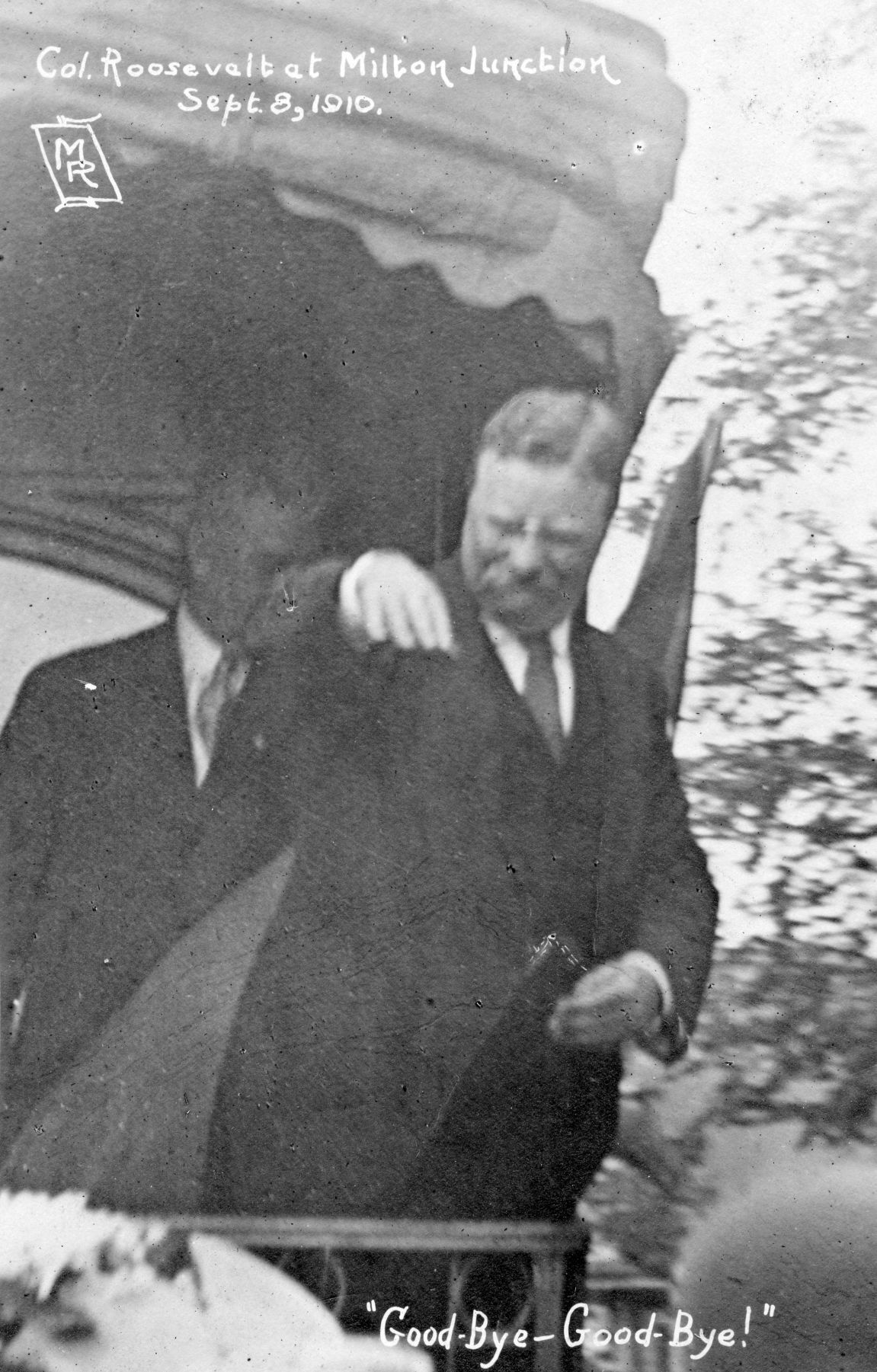 Former President Theodore Roosevelt festures from the back of a train during a whistlestop in Milton Junction in September 1910.

Former President Theodore Roosevelt stands at the back of a train during a whistlestop in Milton Junction in September 1910.

Crowds gathered in Milton Junction in September 1910 as former President Theodore Roosevelt made a whistlestop in the small community.

Former President Theodore Roosevelt festures from the back of a train during a whistlestop in Milton Junction in September 1910.

From the time of the taking of Cuba’s San Juan Heights by the Rough Rider Regiment of the United States Army during the Spanish-American War in 1898 until his death in 1919, there was no larger celebrity in our nation than Theodore Roosevelt.

Roosevelt’s mountainous personality as a war hero, adventurist, politician and two-term president made him America’s most admired and recognizable figure during the first two decades of the 20th century. Less than 10 years following his death at 60 years of age, the likeness of Roosevelt was being carved in granite alongside three giants of the previous century on South Dakota’s Mount Rushmore.

So when a train carrying Roosevelt did a whistlestop in Milton Junction on a morning in September 1910, the small railroad village was sent into a tizzy.

Roosevelt’s train was scheduled to take him from Milwaukee to Freeport, Illinois. Apparently some lobbying by Wisconsin First Congressional District Rep. Henry Allen Cooper and Milton Junction Post Master Charles Button resulted in a brief stop by Roosevelt’s train as it approached the Morgan House hotel and depot.

After serving a term as Governor of New York, Roosevelt was William McKinley’s running mate in the 1900 presidential election. That Republican ticket defeated Democrats William Jennings Bryant and Adlai Stevenson. Six months into his second term as president, however, McKinley was assassinated in Buffalo, New York, and Roosevelt finished McKinley’s term as president. Roosevelt was re-elected in 1904 and groomed his Secretary of War, William Taft, for a successful presidential run in 1908.

Roosevelt’s progressive proclivities began putting distance between himself and the Republican Party. By the time Roosevelt made his brief appearance in Milton Junction in 1910, he was ramping efforts toward challenging Taft for the Republican nomination in the 1912 presidential election. Through a series of political wranglings, Taft secured the nomination at the Republican convention in Chicago in the summer of 1912.

The election result had little effect on the legacy of Roosevelt. When he stopped in Milton Junction two years prior, Roosevelt’s popularity and notoriety were perhaps at their peak. The front page of the Sept. 1, 1910, issue of the Milton Junction Telephone newspaper announced Roosevelt’s impending visit this way:

“Postmaster Button has learned that Col. Roosevelt, the most popular living American, will pass through our town next Thursday morning, September 8 at 8:30 on his way from Milwaukee to Freeport, and strenuous efforts are being made to get a few minutes stop and a ‘Good Morning,’ if nothing more, from the Colonel.

“In the event that we can be assured a short talk by Mr. Roosevelt, word will be passed by telephone and otherwise, and a big crowd should be out to greet him.”

Button was likely pleased to have been able to sway a stop by Roosevelt. But Button was perhaps disappointed that America’s most celebrated icon did not disembark and spend more time in the Junction.

Nonetheless, a large crowd of folks from Milton Junction and Milton turned out for a glance of the former president. The Sept. 8 issue of the Telephone reported, “A crowd of nearly 2,000 people were at the depot this morning at 9 o’clock to get a glimpse of the man who probably has the respect of more people than any other man in the world: Theodore Roosevelt

“The special train bearing his private car reached Milton Junction about 9 o’clock and as it pulled in, the distinguished citizen was on the rear platform to greet the crowd. He stated that through the urgent request of Congressman Cooper, he consented to give Milton Junction a few moments.

“His remarks were directed to the school children who were present in force, both from Milton and Milton Junction, and he said he was glad to see so many children, especially babes in arms. Just a greeting was all he gave, but as the train pulled toward Janesville, the crowd gave some rousing cheers.

“He made short stops at Janesville, Beloit and Rockford, and at Freeport he spent the afternoon.”

Three photos taken of the brief event by noted Junction photographer Mark Richardson are held in the archives of the Milton Historical Society. All were made into postcards and show the train facing west just short of the Morgan House, which can be seen in the background. The crowd gathered in the area behind the former Courier building along Vernal Avenue. Several rail spurs and a wooden platform that no longer exist, can be seen in one of the photos.

One photo is taken from ground level and shows Roosevelt acknowledging the crowd. A second photo is an elevated angle and shows the crowd. While not a tell-all photo, this shot indicates that the newspaper’s claim of a crowd of 2,000 people might be a bit over-stated. The third photo is a nice image of Roosevelt waving farewell to the attending children.

Charles Button was a well-known community leader for a number of years. He was the younger brother of George H. Button, who in 1890, erected the brick building at the west end of Vernal Avenue that currently houses Milton Family Restaurant. A portion of the building located for a time the Junction post office along with Chambers and Owen confectionary business.

Charles Button was appointed Junction postmaster in 1900 by President McKinley and then again in 1906 by Theodore Roosevelt. He also served as chair of the town board. Charles Button died in 1934 at age 93.

Henry Allen Cooper, of Burlington, was an influential member of Congress, representing Wisconsin’s First Congressional District from 1893 through 1931.

Doug Welch is president of the Milton college Preservation Society and a former editor of The Milton Courier.