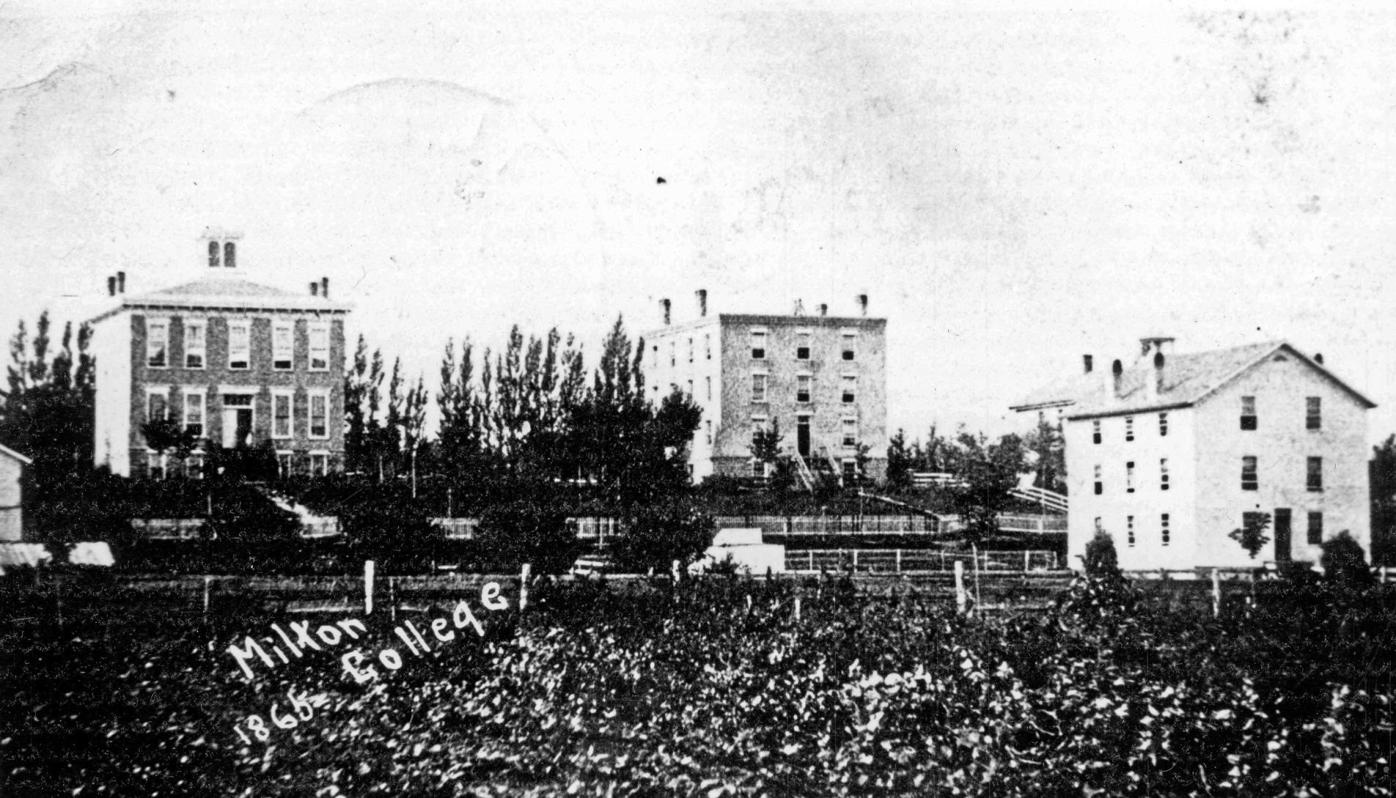 This 1865 photo shows a 10-year-old Main Hall prior to the bell tower construction two years later. To the west of Main is Goodrich Hall, built in 1857 as the first coed dormitory in the State of Wisconsin before serving strictly as a women’s dorm. The building to the right is a former flouring mill purchased by the Academy and moved to what is now College Street to serve as a male dormitory. 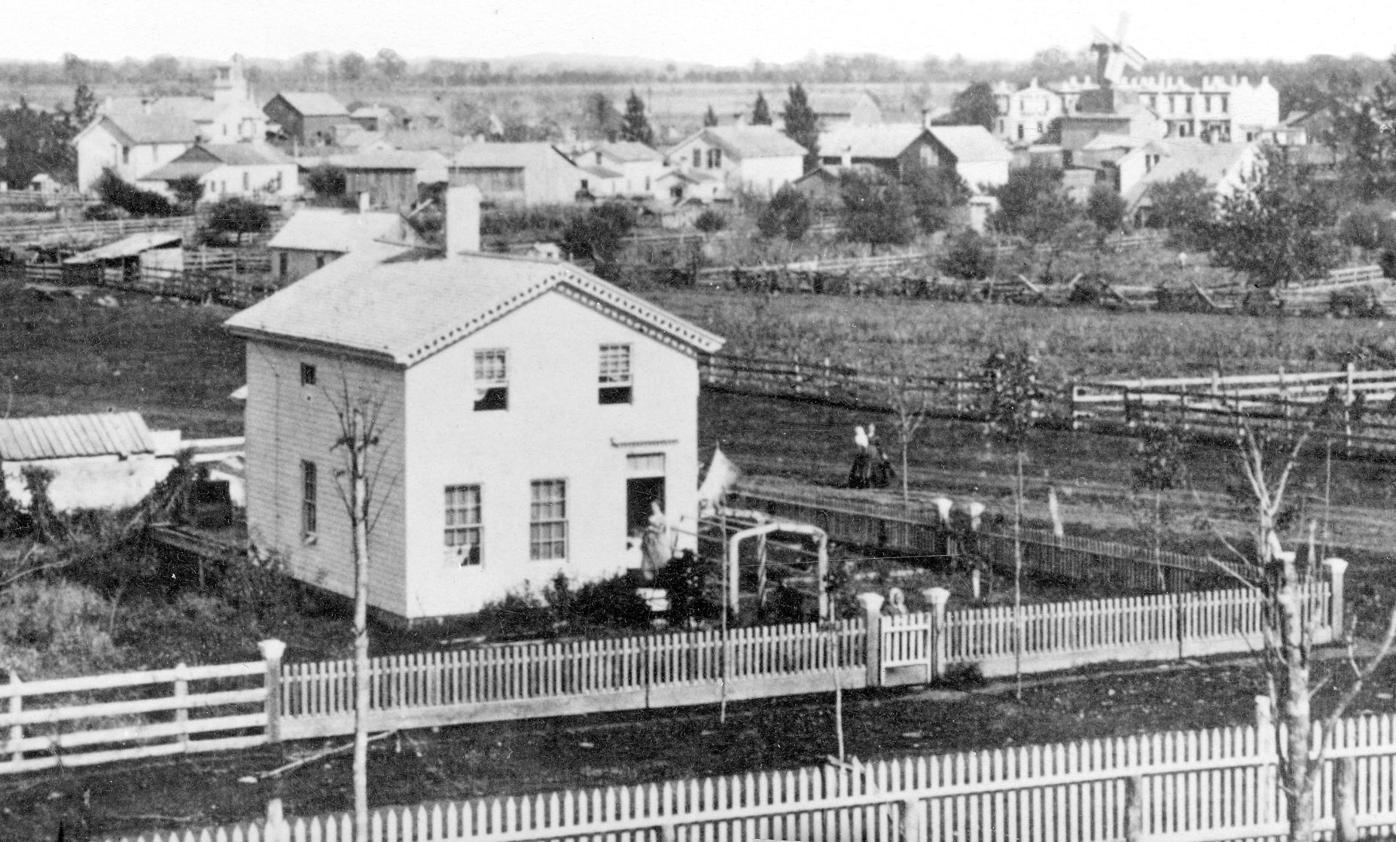 This is the oldest known photo of the Milton community. The view is from the hill across the village from the Milton House in the area where Main Hall would be constructed in 1855. The Milton House can be seen in the background as a two-story hexagon structure. Joseph Goodrich added the third story to the inn in 1867. The original grout Academy building–on the left of the frame, is still standing but would collapse in 1854. The windmill of the 1852 rail depot is also visible.

This photo of what would become Milton’s Goodrich Town Square was taken shortly after the reconstruction of the Seventh Day Baptist Church in 1883, visible to the left. It illustrates the town square concept of Joseph Goodrich and the role his Milton House, visible in the background, played as an early hub of the community. 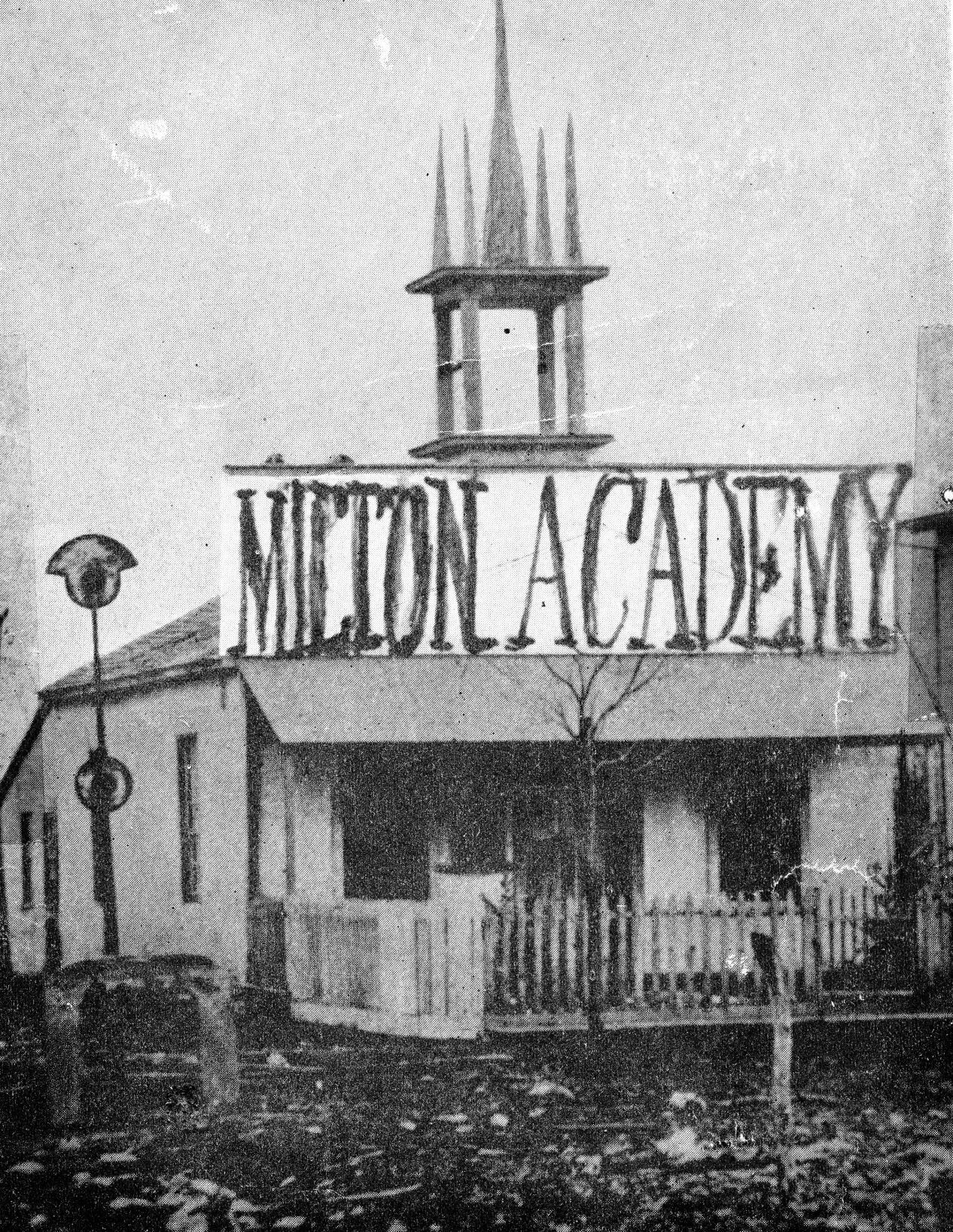 Joseph Goodrich completed construction of the original Milton Academy building in 1844. Located on the west side of what would become North Goodrich Park, this building collapsed by 1854. 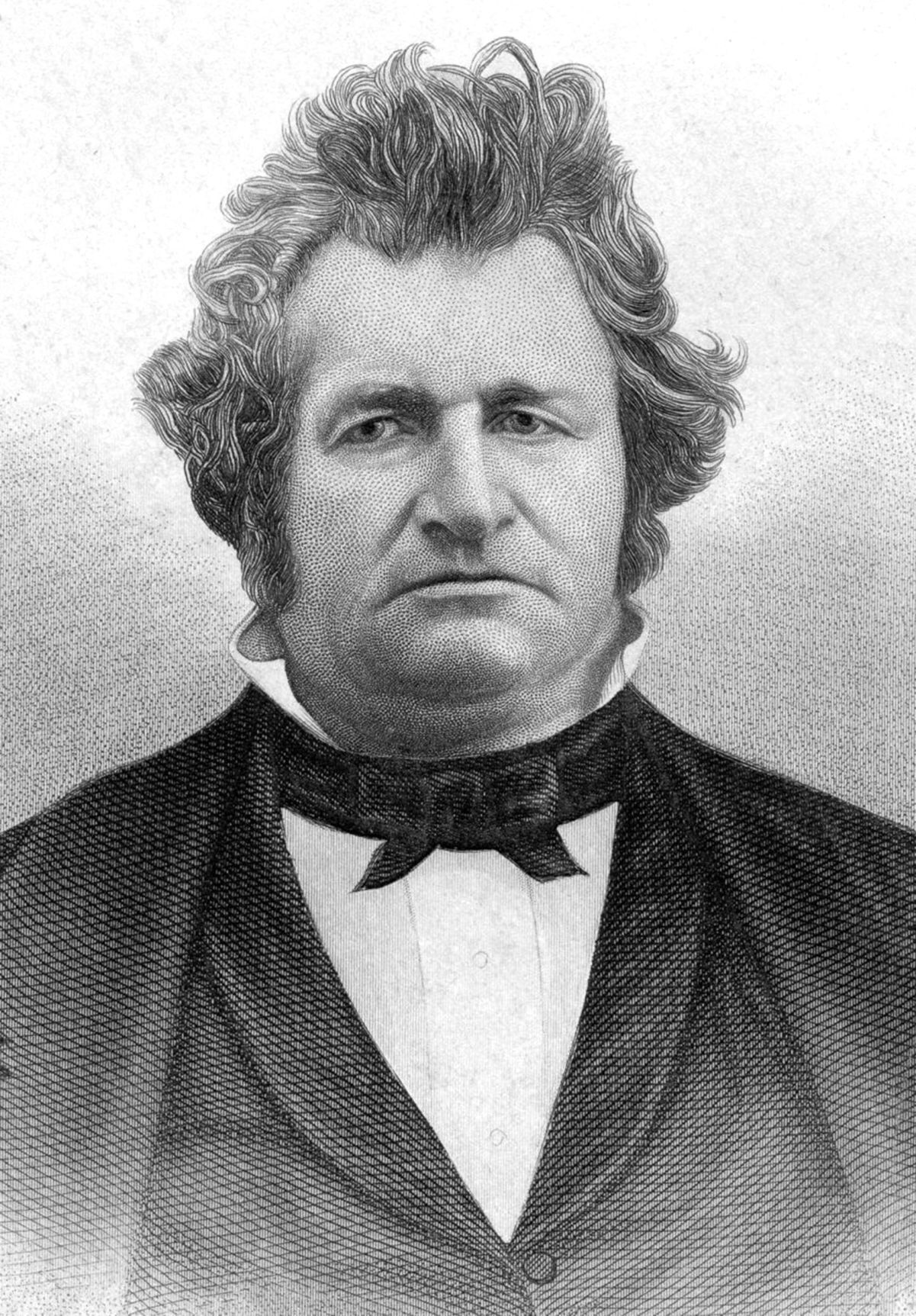 This 1865 photo shows a 10-year-old Main Hall prior to the bell tower construction two years later. To the west of Main is Goodrich Hall, built in 1857 as the first coed dormitory in the State of Wisconsin before serving strictly as a women’s dorm. The building to the right is a former flouring mill purchased by the Academy and moved to what is now College Street to serve as a male dormitory.

The storied history of the Village of Milton begins with the decision by Joseph Goodrich to leave his native state of New York in 1838 to homestead on the du Lac Prairie.

Goodrich staked his claim at the crossing of two militia trails still worn from the Blackhawk War six years prior.

It was at this crossing where Goodrich built his Milton House Inn, a decision that not only resulted in the construction of what still stands as Rock County’s only National Historic Landmark, but also spawned two villages that eventually grew into one city, and a small liberal arts college that fed the minds and hearts of people all over Southern Wisconsin for more than 135 years.

Goodrich’s early inn and family dwelling consisted of two wood frame buildings and a log cabin that was constructed in 1837 about eight miles to the east and moved to its current location. While planning construction of a more permanent inn and home, Goodrich was busily platting a town. He designated land he had secured for a park and square. He gifted other land for a church for the Seventh Day Baptists whose growing congregation had been meeting for services in the Goodrich home. He also dedicated land for a cemetery and school.

Goodrich decided to construct his inn and apartment/business block with readily available materials indigenous to the area. He settled on the unique idea of constructing buildings from poured grout, made from the sand and limestone prevalent in the area. Another unique architectural feature of Goodrich’s creation was his decision to make the inn portion of the building a hexagon with a long wing extending off the south side of the inn. One section of the business wing survived a 1948 collapse, but the hexagon inn remains the oldest poured cement building in the United States.

While operating his temperance inn, Goodrich worked through the Milton Seventh Day Baptist church to promote political participation in the cause of abolitionism. Goodrich also acted discreetly in support of radical abolitionists and sheltering fugitive slaves at the Milton House.

The hexagon inn was completed in 1844. And with the 1849 construction of the Goodrich Block, the fledgling village had a center of commerce and activity. Milton’s first post office was in the complex, which was soon attracting dozens of stagecoaches per day.

It was from this complex that the community began growing to the west. Goodrich utilized the business block of the Milton House as a precursor of a modern-day strip mall and business incubator. Proprietors operated businesses on the ground floor of the wing and could live in the second-story apartment. Established businesses often moved across the park to what would become a busy business district.

Academy shaped the course of village

Understanding the importance of and need for higher education in his new community, Goodrich founded the Du Lac Academy in 1844, a decision that intertwined the village with what became Milton College for the next 135 years of the school’s existence.

Goodrich managed the school and bore its expenses during its first years. The academy opened as a select school in December 1844, with the Rev. Bethuae C. Church as its first teacher. Tuition was $3 per 11-week term, of which there were three a year. Board with private families was a dollar per week. There were 67 students, 40 men and 27 women.

The success of the academy proved its worth to the community. In the winter of 1847-48, a group of citizens combined to secure a charter, placing it under the control of a board of trustees. It was named The Du Lac Academy, an unpopular name not used beyond securing of the charter.

Beginning with the fall term of 1851, Ambrose Coats Spicer headed the school for seven years. An active abolitionist, Spicer left for Kansas in 1858 to join the James Lane effort to populate “Bloody Kansas” with anti-slavery advocates. In 1860, Spicer served as an honor guard at the Lincoln inauguration. Spicer cultivated local support for the academy and in 1854 a new charter was obtained from the state legislature named Milton Academy.

The old grout building became untenable, and classes were held in private residences until the fall of 1855 with the completion atop the village hill of the brick building that still stands as Main Hall.

Doug Welch is president of the Milton College Preservation Society and a former editor of The Milton Courier.