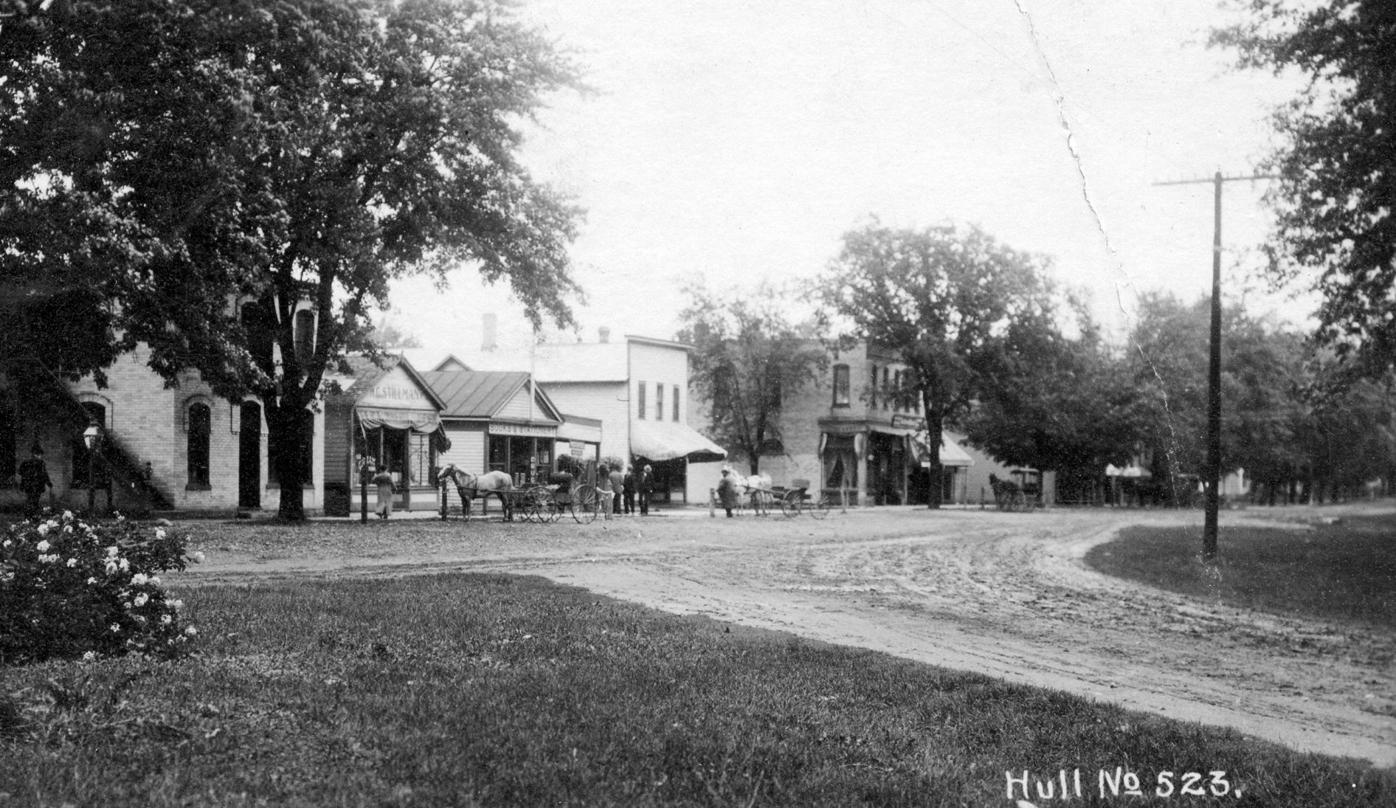 The south end of Main Street was a dirt and gravel road in the early 1900s.The two-story building is the Bank of Milton, constructed in 1884. The wooden structures stood until 1916 and the TI Place building at the corner of Main and College Street, most recently housed Rockies Pizza and Subs.

At the corner of College and Main streets, the Dunn and Boss Building was constructed in 1891. It is now home to the Corner Closet. To the north is the JP Bullis building, erected in 1899. Between the buildings was the Cottage Hotel, which operated until 1920. Horses, buggies and automobiles line Main Street, with a livery visible at the end of the street where R&W Heating is now located. 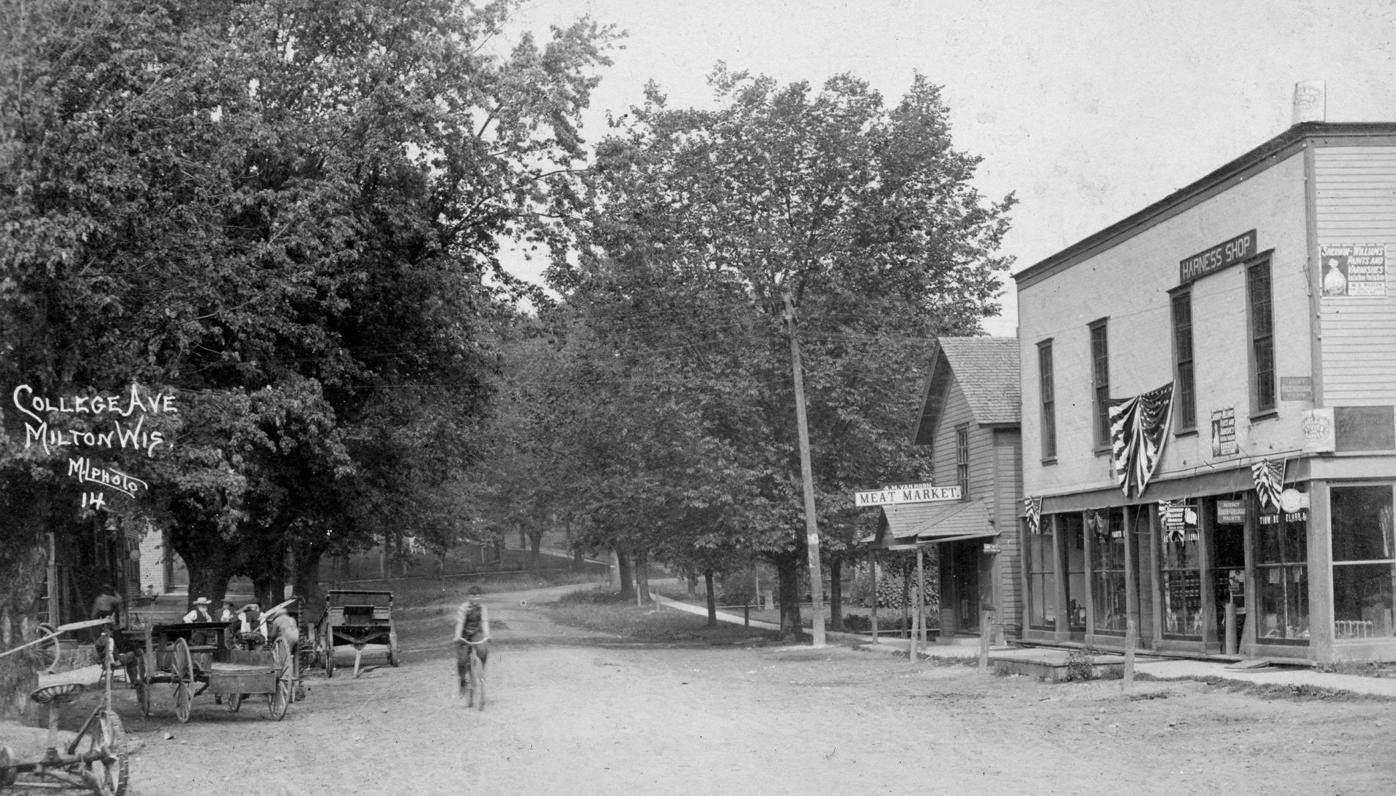 This is a view looking west up College Street from Main Street in 1909. An implement dealer operated for many years in the building that is currently being repurposed by TLC Restorations. On the north side of the street was the A.M. VanHorn Meat Market and Maxson Hardware. The two buildings burned in a December 1914 fire. 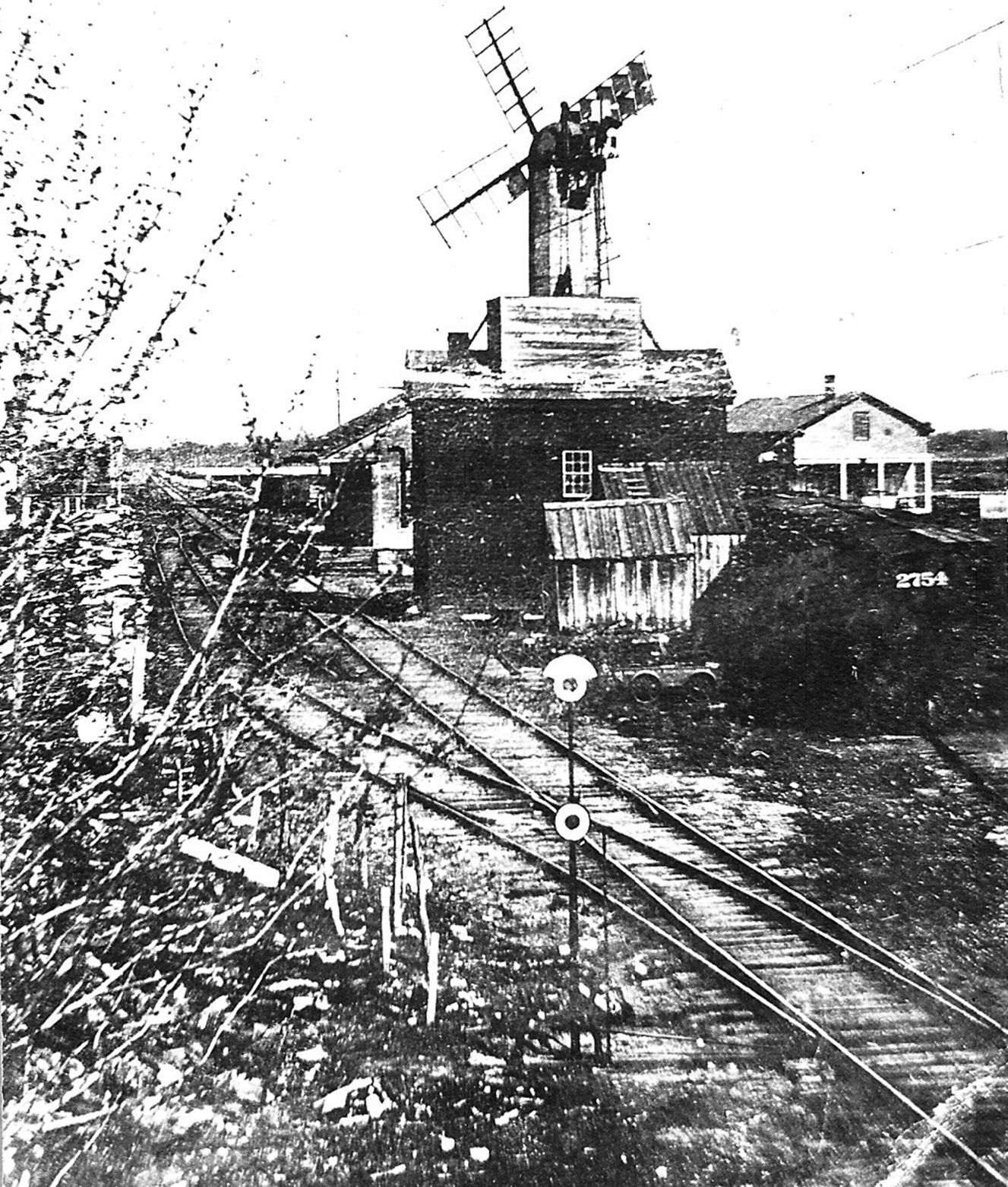 The first rail depot in Milton was constructed in 1852 when the first train pulled into Milton from Milwaukee. The depot was located in the area that is now adjacent to North Goodrich Park across the tracks from the Milton Community Center. For a few years, the rail line ended in Milton and travelers headed west had to board stagecoaches. 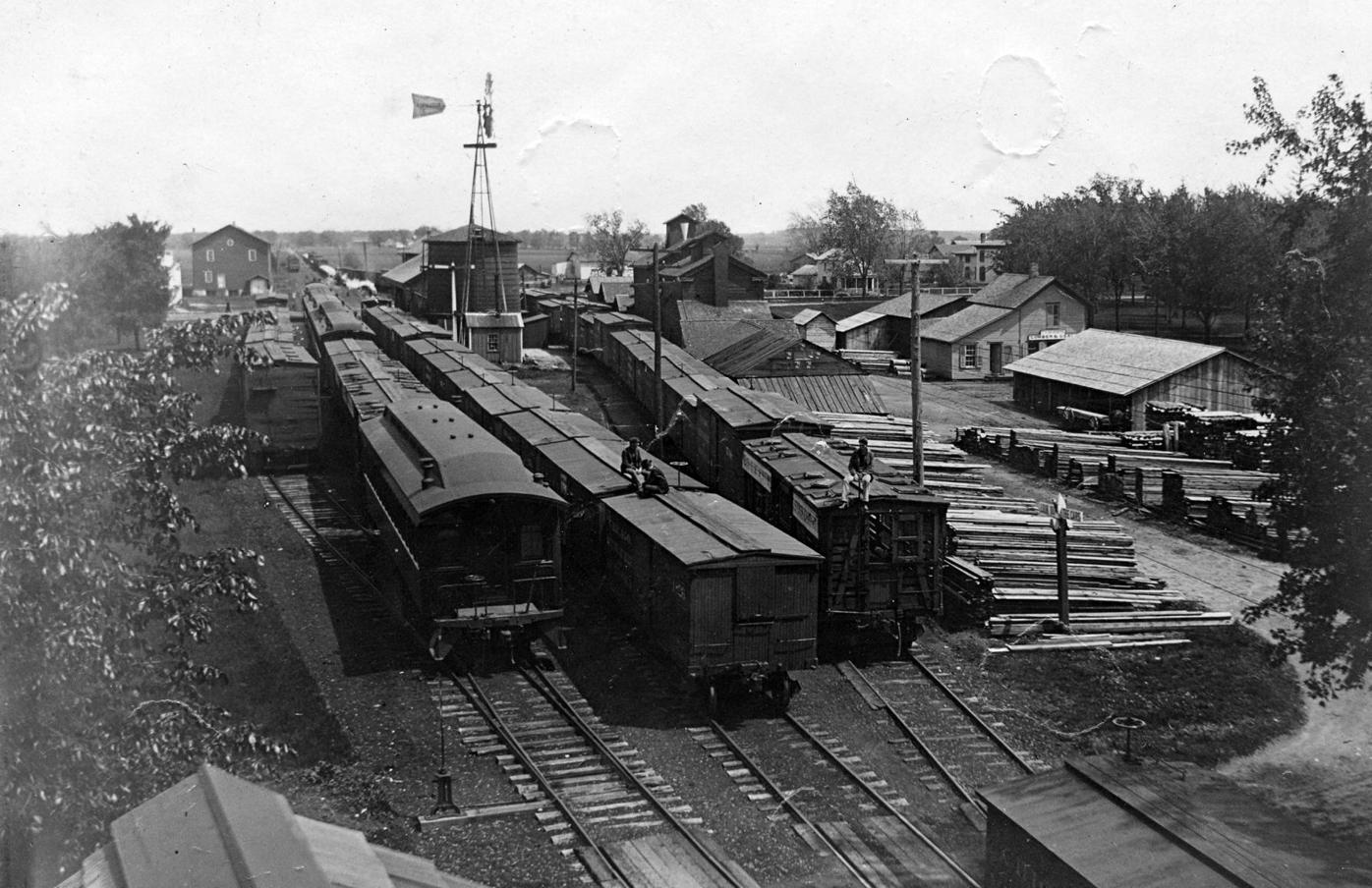 This elevated view of the Milton rail yard looking west was taken around 1910. It shows a busy four-track spur and a lumber yard to the south of the tracks. The area on the right of the frame is now home to Blackhawk Community Credit Union.

The south end of Main Street was a dirt and gravel road in the early 1900s.The two-story building is the Bank of Milton, constructed in 1884. The wooden structures stood until 1916 and the TI Place building at the corner of Main and College Street, most recently housed Rockies Pizza and Subs.

This elevated view of the Milton rail yard looking west was taken around 1910. It shows a busy four-track spur and a lumber yard to the south of the tracks. The area on the right of the frame is now home to Blackhawk Community Credit Union.

Statehood was but a year old when grading for a rail line heading west out of Milwaukee began and was in need of funding. Goodrich attended a meeting of shareholders of the Milwaukee and Mississippi Railroad and voiced his willingness to mortgage his property to invest in the rail line. He challenged others in communities between Milwaukee and the Rock River to do the same.

Subsequently, Goodrich invested $3,000 in the rail line and others followed suit. Soon tracks were being laid from Waukesha to Palmyra to Whitewater to Milton and Edgerton, eventually reaching Prairie du Chein.

The first train pulled through Milton in 1852 on the new Milwaukee-Mississippi line. Goodrich gifted land for the right-of-way and depot. The rail did much to open up the countryside and spur growth in Milton. Soon, as many as 30 passenger trains per day rolled through one of Southern Wisconsin’s major rail hubs. The hub provided area farmers with a modern-day transportation outlet to get crops and livestock to market.

The Village of Milton’s downtown began blossoming in the 1870s as shops, stores and other forms of services and commerce, including the post office, moved away from the Goodrich Block and across the square to locate along what is now Parkview Drive.

The first was a building in which brothers W.P. and W.W. Clarke operated stores for books and stationary and a pharmacy. The building also housed the post office. The next building to the north was brought to that location in the 1870s. In 1884 the building was sold to TI Place who, for 55 years at that location, sold jewelry, china, musical instruments, clocks and watches until his death in 1940. Most recently, the building housed Rockie’s Pizza and Subs.

College Street also featured several bustling businesses, as evidenced in a 1909 photo. A bustling implement dealer, including, later, Lipke Brothers International Harvester, operated on the south side of College Street and a meat market/grocery store and Maxson’s Hardware store on the north side.

These structures on the north side of College Street burned in a 1914 fire. A year later a large brick commercial structure, known as the Maxson Building, was constructed. Until a couple of years ago, this building was home to American Awards and Promotions.

It wasn’t until the 1890s that the large brick building north of College Street were constructed. The building at the corner of College and Main streets is the Dunn and Boss building, erected in 1891. Fredrick Dunn was the son-in-law of Robert Williams, a long-time merchant in the Goodrich Block. In 1887, Dunn opened a clothing store in the block adjacent to Williams’ store. He then partnered with George Boss to open a clothing store and grocery store in the new building.

In 1904, an application was made to incorporate Milton as a village. A survey by Milton College Professor Alfred E. Whitford indicated that the area to be included was 982 acres. An accurate census verified by Jonas B. Tracy on May 3, 1904, showed the population of the proposed village was 813.

In an election held in September of that year, the incorporation carried by just 26 votes, 111-85. A headline in the Sept. 15, 1904, Milton Telephone proclaimed “Milton Stands for Progress.” The story reported, “Milton today has taken its first and most important step toward becoming a thriving and energetic business center.”

In hindsight, it’s difficult to argue with the opinion stated by the Telephone in reporting the vote, taking into account the considerable progress made by the village in the 15 years following incorporation.

By 1919, the village purchased a village hall; entered into a contract with the Milton Water, Light and Power Company to furnish electric current for street lights, which replaced oil lamps; realized the construction of a new rail depot; facilitated the construction of two large commercial buildings (the Whittet building on Main Street and the Maxson building on College Street); and saw two major construction projects on the Milton College campus with the addition of Whitford Hall in 1907 and what became the Daland Center in 1913.

Doug Welch is president of the Milton College Preservation Society and a former editor of The Milton Courier.