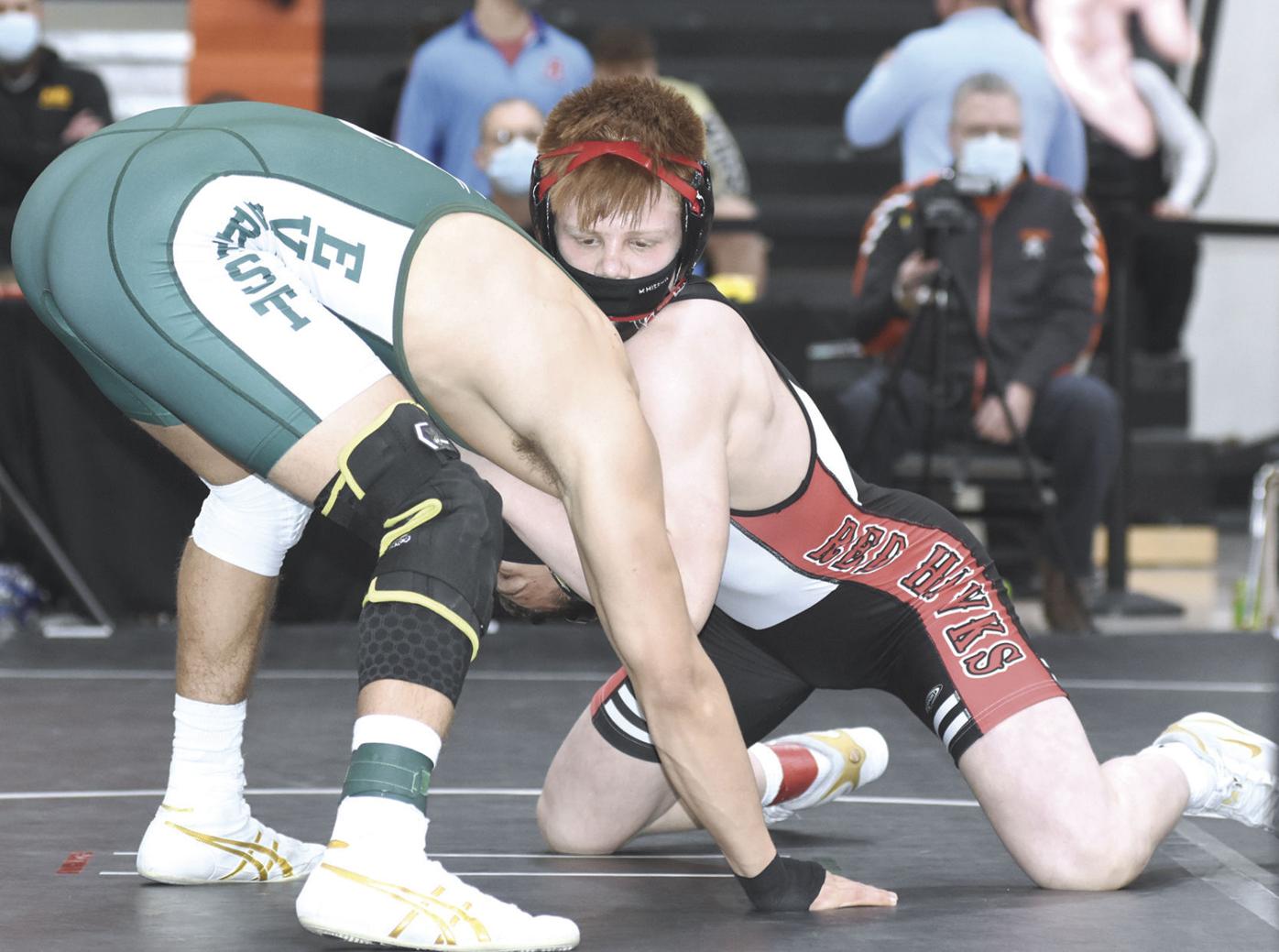 Milton freshman Aeoden Sinclair works a front headlock on D.C. Everest’s Demitrio Covarrubius during a 152-pound consolation match at the WIAA Division 1 state individual wrestling tournament on Saturday in Kaukauna. Sinclair won the match by a 5-1 decision and went on to place third.

Milton freshman Aeoden Sinclair works a front headlock on D.C. Everest’s Demitrio Covarrubius during a 152-pound consolation match at the WIAA Division 1 state individual wrestling tournament on Saturday in Kaukauna. Sinclair won the match by a 5-1 decision and went on to place third.

Riley Nilo and Aeoden Sinclair did not get off to the starts they were hoping for at the WIAA Division 1 state wrestling tournament.

The Milton High wrestlers hardly could have finished any stronger after that.

Sinclair and Nilo finished as state medalists, with Sinclair taking third place at 152 pounds and Nilo taking fourth at 106 pounds on Saturday at Kaukauna High School.

“In wrestling, maybe more than any other sport, you’ve got to have a short memory, especially in tournaments,” Milton coach Patrick Jauch said. “Within 45 minutes to an hour, there is going to be another opponent 1-3 feet away from you ready to battle.

“Our guys answered the bell, and I couldn’t be more proud of them.”

Nilo, a junior, was ranked third in the state in Division 1 heading into the tournament but drew top-ranked Ben Bast of West Bend West in the first round.

Bast won a hard-fought 7-5 decision and cruised in his next two matches to win the state championship.

“Riley had him (Bast) on his back for a good portion of the first period and gave a great effort,” Jauch said. “This was the closest match for that kid all day, and Riley had opportunities to win it.

“One of the things Riley told me was, ‘I’m probably going to pin my next guy.’”

Sure enough, Nilo pinned Badger’s Logan Clausen in the second period of his first wrestleback match. He won a 6-0 decision over La Crosse Logan/Central’s Cole Fitzpatrick to reach the third-place match.

There, he lost 8-6 by sudden victory to Pewaukee’s Andrew Martin to finish in fourth place.

Sinclair, a freshman, was ranked No. 2 in the state at 152 pounds and took on fourth-ranked Ethan Riddle, of Germantown, in his opening match. Riddle edged Sinclair by a 3-2 decision.

“He (Sinclair) was struggling to get his offense going,” Jauch said. “Again, he had opportunities to win, but it just didn’t go his way.

“Sinclair told me he was pretty sure he’d be wrestling the kid that beat him later in the day for third place, and that (rematch) was going to go his way.”

Sinclair earned a 5-1 decision over D.C. Everest’s Demitrio Covarrubius and a 3-0 decision over Marshfield’s Ryan Dolezal to earn his shot in a third-place match.

Indeed, Sinclair got his rematch with Riddle and this time won, 8-4.

“We were disappointed with the first round, and as coaches you worry about the demons that get into your athletes’ heads,” Jauch said. “It’s way easier to give up, tuck your tail between your legs, be satisfied with being a state qualifier and just get a good meal and go home.

“Neither one of our guys did that.”