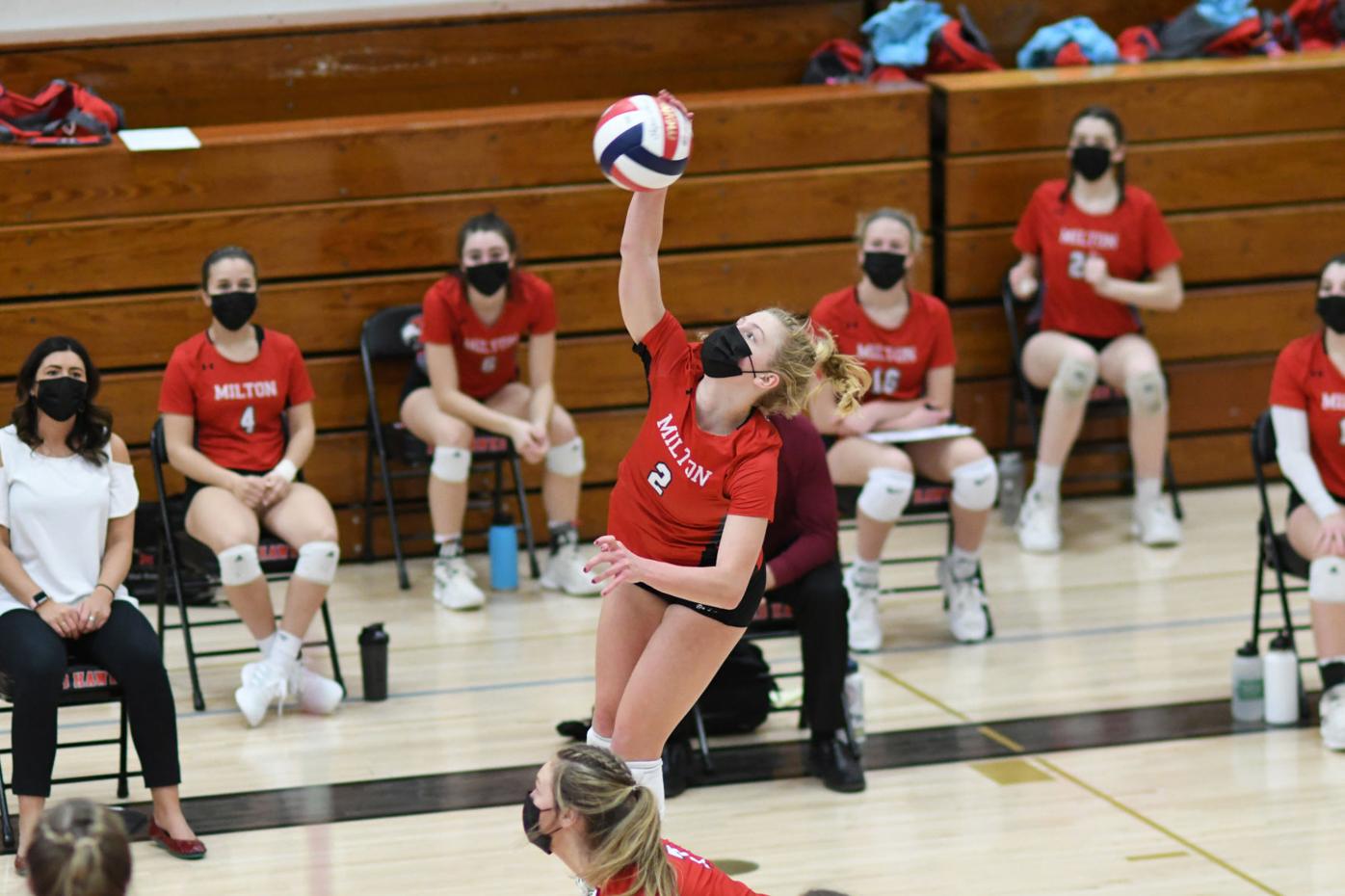 Milton High’s Jordan Karlen goes up for a kill during the Red Hawks’ five-set victory over visiting Fort Atkinson on March 4, 2021. 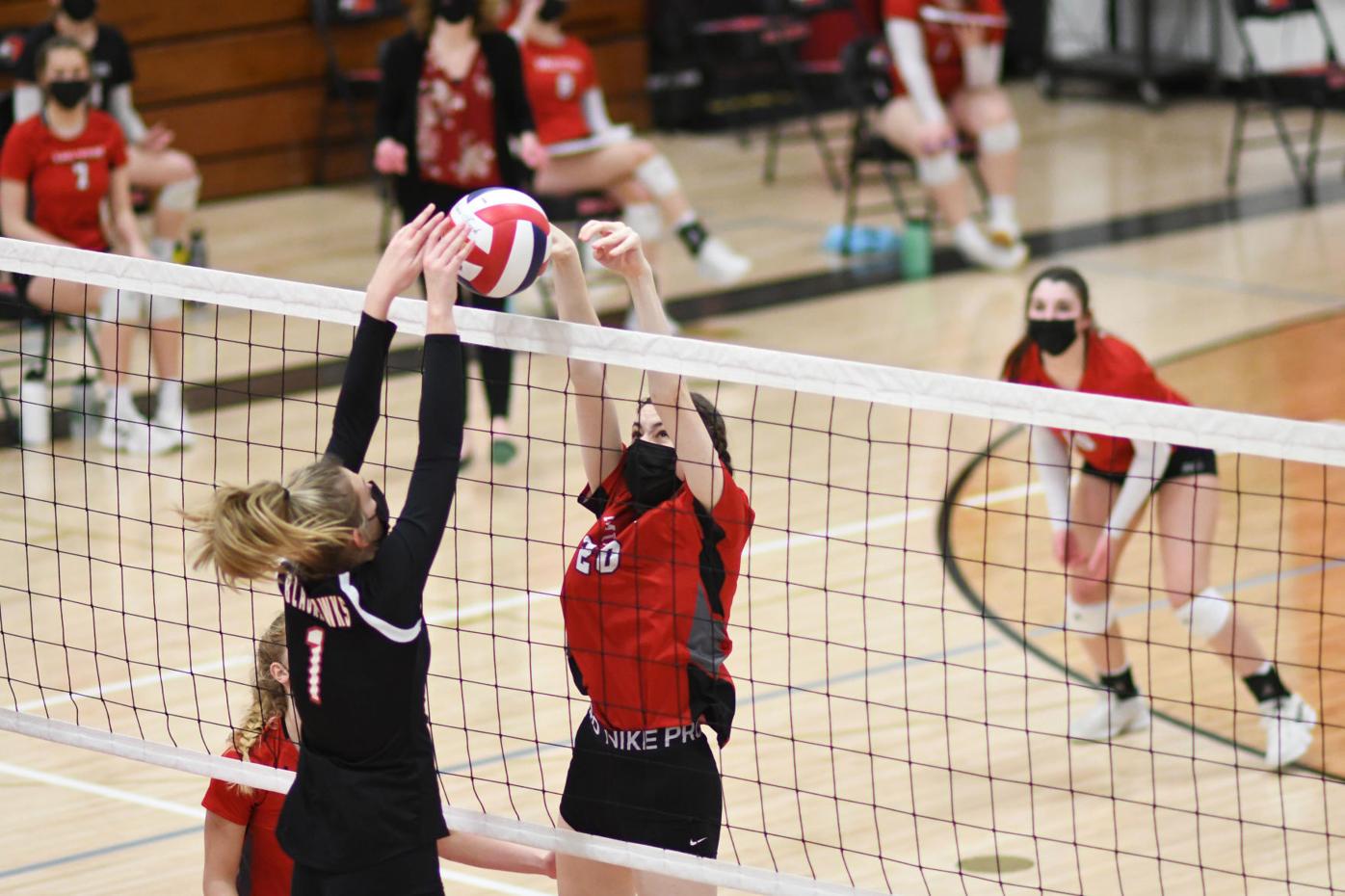 Milton High’s Nora Stuckey jumps to block a shot at the net against visiting Fort Atkinson on March 4. Stuckey finished with three block kills in the Red Hawks’ come-from-behind victory. 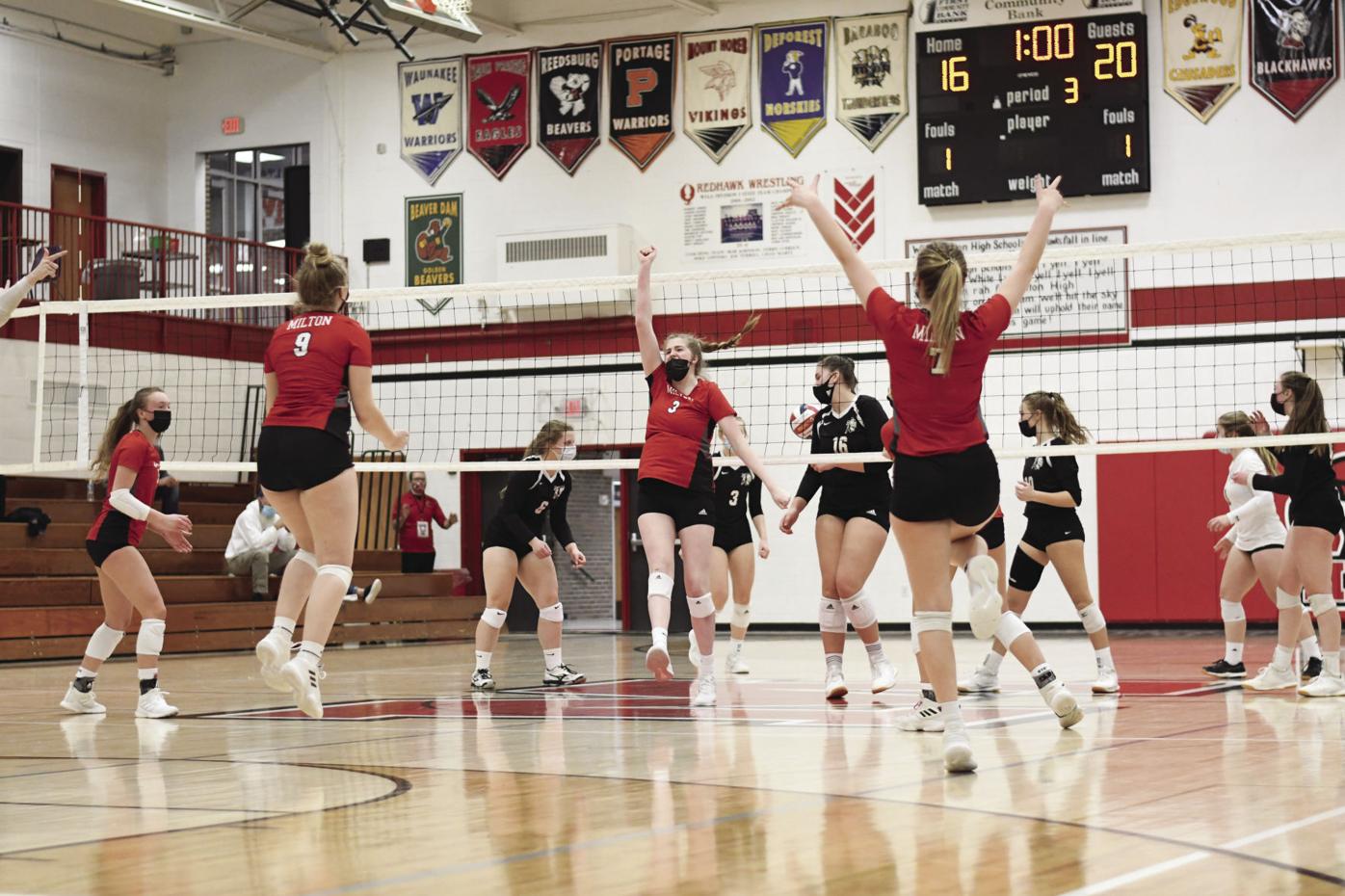 Milton High’s Jordan Karlen goes up for a kill during the Red Hawks’ five-set victory over visiting Fort Atkinson on March 4, 2021.

Milton High’s Nora Stuckey jumps to block a shot at the net against visiting Fort Atkinson on March 4. Stuckey finished with three block kills in the Red Hawks’ come-from-behind victory.

Although it had been a year and a half since Milton High volleyball last played a match, the Red Hawks never forget how their 2019 season ended: a home loss to Badger South Conference rival Fort Atkinson in WIAA regional final.

Milton was able to exact some revenge last Thursday when it battled much of the night for a 3-2 win over the visiting Blackhawks.

“This win meant a lot of different things for our team,” first-year coach Kaitlin Lundeen said. “Fort Atkinson is a strong, well-coached team. Also, we don’t have a conference tournament this year, so these games with other conference teams are the closest we’ll get to deciding a conference champion.

“Defeating such a strong conference rival really sets the standard for the rest of our season. We know what we’re capable of, so now we need to continue to meet that standard or push past it.”

The Red Hawks not only had to battle back in the overall match, but several individual sets, as well.

No moment was more important than the fourth set. Down 2-1 in the match and 20-16 in the set, senior libero Alysse Kuglitsch’s strong serving led to nine straight points and a 25-20 fourth-set win for the Red Hawks.

“The girls did a great job staying focused in each point and executing the game plan,” Lundeen said. “Our message was simply, ‘We believe in you, and you can do this.’ We have absolute confidence in their ability to adjust and find success.

“Alysse had a great serving run, and our defense got really aggressive and refused to let the ball hit the floor.”

The momentum from the end of the fourth set did not immediately carry over to the fifth set. There, Fort Atkinson jumped out to an early 5-2 lead.

However, The Red Hawks responded with a 7-1 run to lead 9-6 and force the Blackhawks to take a timeout. Aces from senior Paige Emerson and junior Jordan Karlen and a kill from senior Nora Stuckey sparked the run.

The Blackhawks scored four of the next five points out of the timeout to tie the set at 10. Once Milton got the serve back, the Red Hawks never looked back. Senior Emily Davis had back-to-back aces before senior Juliet Karlen and freshman Gwen Baker finished the match off with kills.

“We continued to focus on one point at a time and stayed aggressive in our defense, attacking and serving,” Lundeen said.

Fort jumped out to a 1-0 lead with a 25-16 first-set win. However, after trailing 24-11, Milton rattled off five straight points near the end of the set to gain some confidence heading into the second set, which the Red Hawks won 25-19.

Lundeen again said that focusing on winning the current point was the key to that little run that helped build some confidence for the Red Hawks.

“In doing that, we were able to let mistakes go and focus on doing everything we could to win that point,” Lundeen said. “I really think that mentality helped us build our momentum. We could stay positive and focused, allowing us to gain momentum and keep it.”

Jordan Karlen led the team with 20 assists and 13 digs. Kuglitsch and Jordan Karlen each had four aces, while Juliet Karlen had 10 kills and Stuckey had three block kills.

“Paige Emerson was a solid and consistent passer on serve receive, and Gwen Baker did a great job slowing down the Fort Atkinson offense at the net,” Lundeen said. “Emily Davis and Grace Schnell were taking great swings to put pressure on Fort and help us win the game.”

The victory over Fort on Thursday helped the Red Hawks finish with a 2-1 record after their first week of play in the alternate fall season.

In their opener March 2, they swept visiting Beloit Memorial, winning 25-13, 25-20, 25-17. Jordan Karlen had 13 assists, four kills and six aces to lead the way. Alysse Kuglitsch finished with seven digs, and Gwen Baker had a pair of blocks.

Nora Stuckey had six kills and two blocks for Milton, while Karlen had 12 assists and Kuglitsch seven digs.