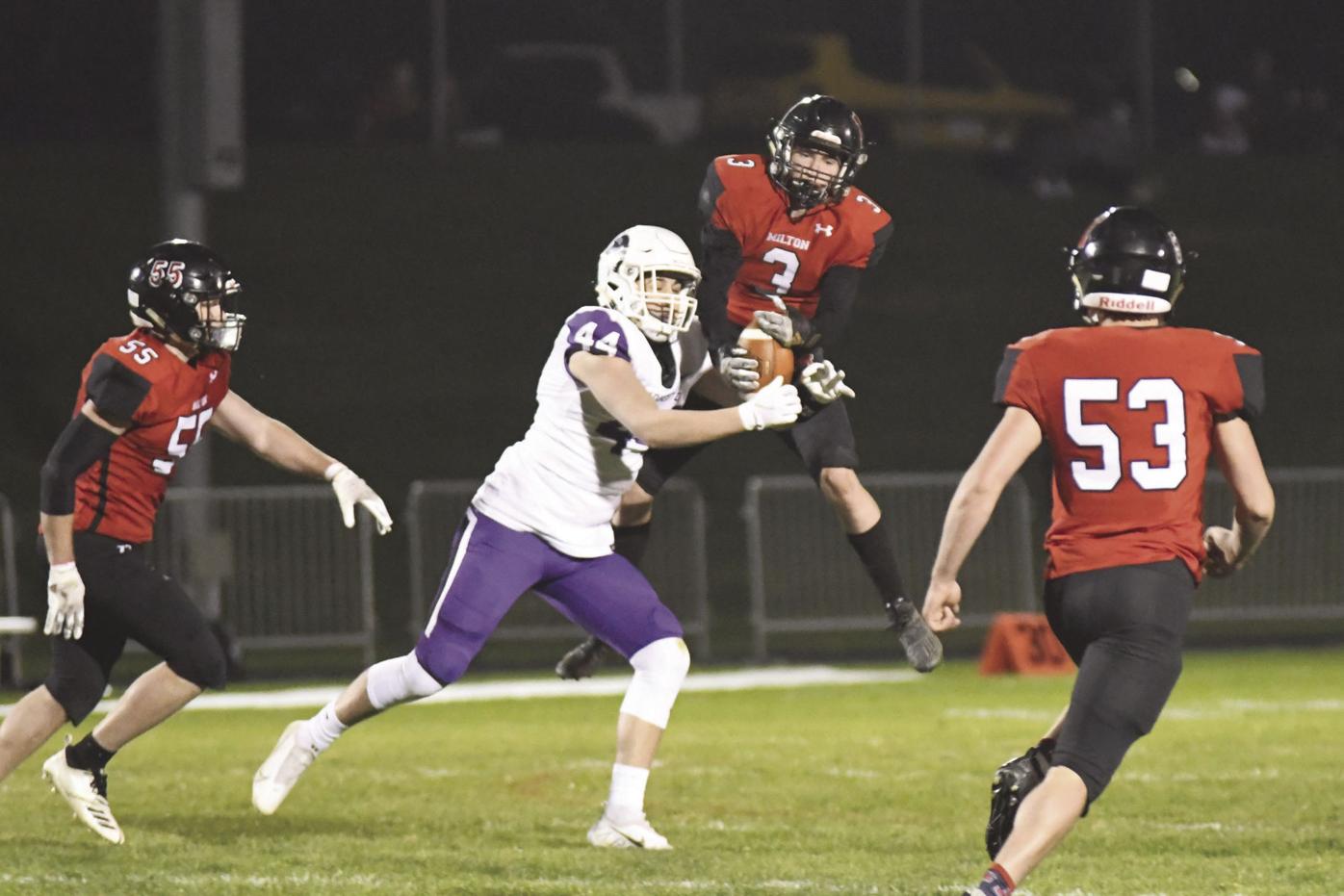 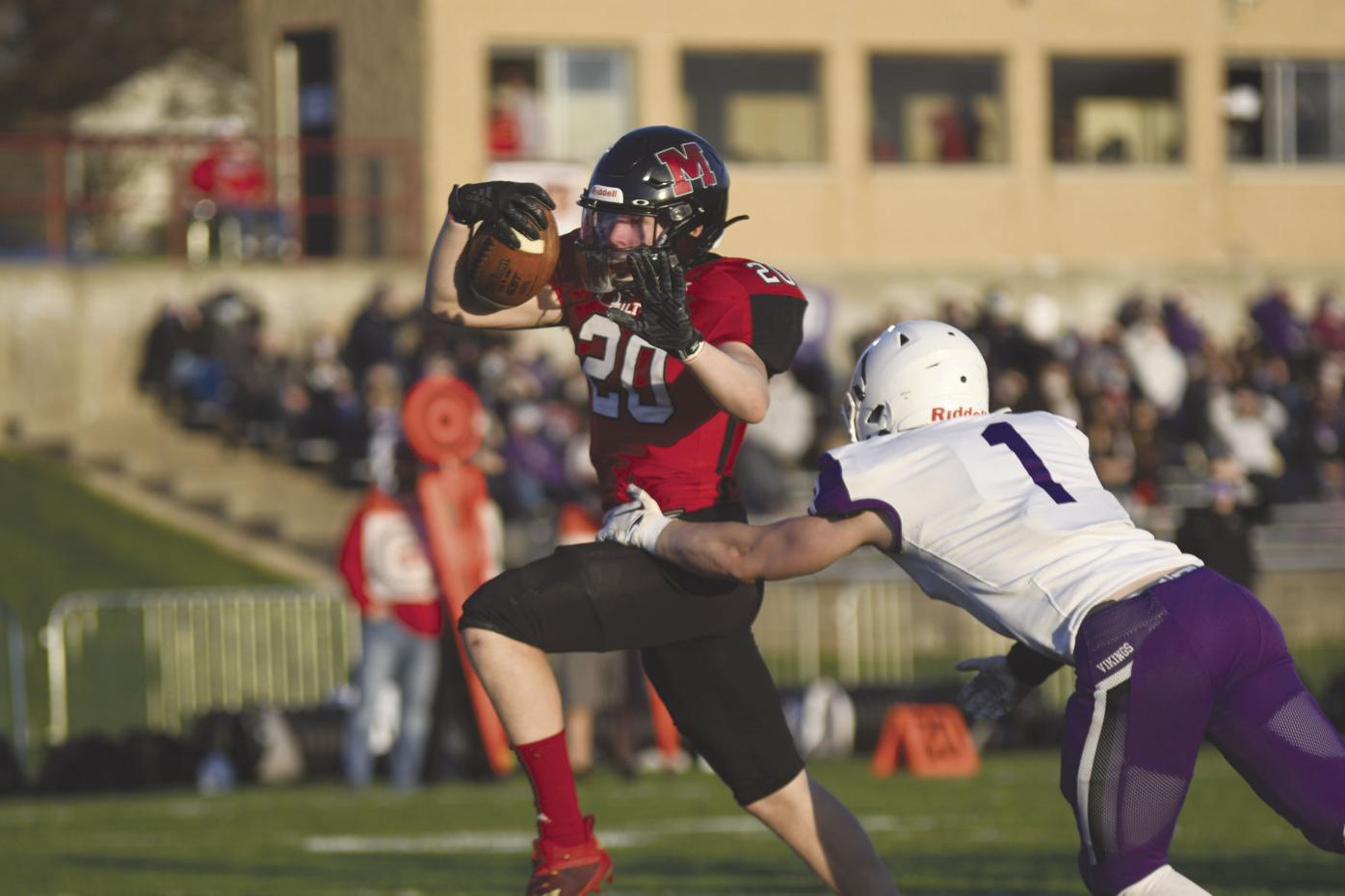 Milton High running back Kyle Dehnert attempts to avoid a tackle attempt by a Stoughton defender during their game Friday, April 16, 2021. Dehnert scored the Red Hawks’ lone offensive touchdown in a 14-7 victory. 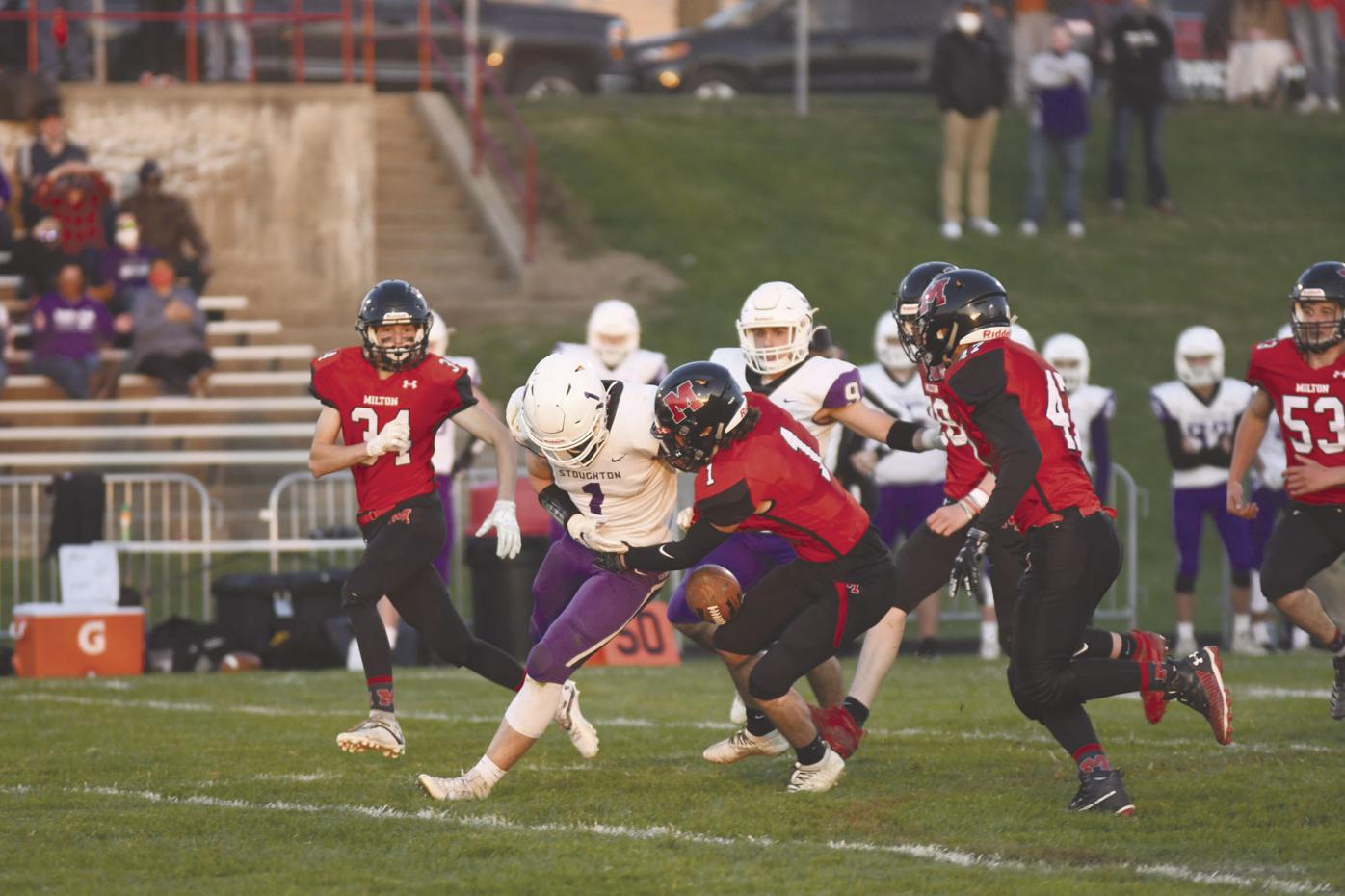 Milton High's Mason Pusateri forces a fumble during the Red Hawks' 14-7 victory over Stoughton on April 16, 2021. 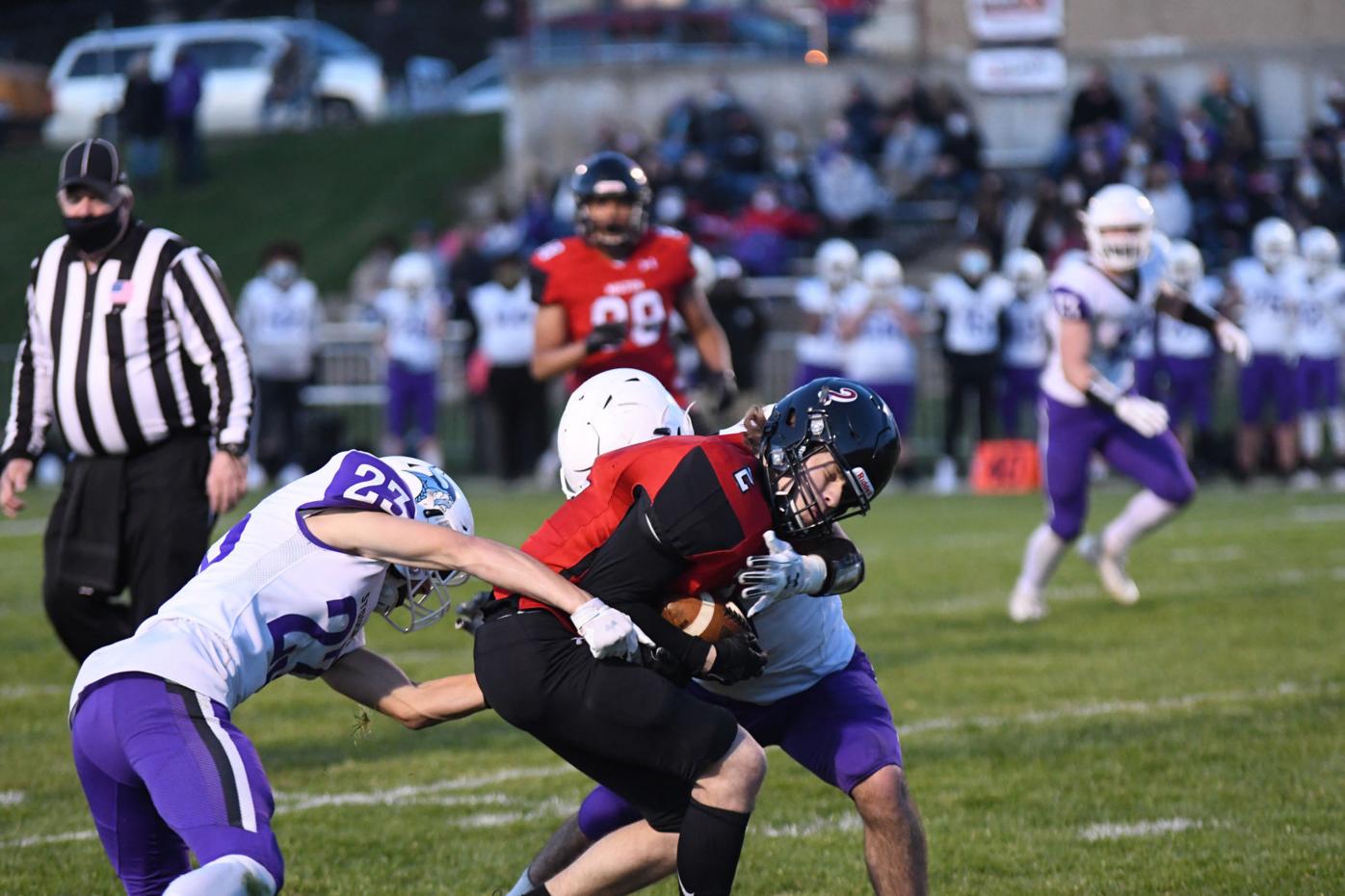 Milton High’s John Storlid fights for extra yardage while being tackled by a pair of Stoughton defenders on Friday, April 16, 2021.

Milton High running back Kyle Dehnert attempts to avoid a tackle attempt by a Stoughton defender during their game Friday, April 16, 2021. Dehnert scored the Red Hawks’ lone offensive touchdown in a 14-7 victory.

Milton High's Mason Pusateri forces a fumble during the Red Hawks' 14-7 victory over Stoughton on April 16, 2021.

Milton High’s John Storlid fights for extra yardage while being tackled by a pair of Stoughton defenders on Friday, April 16, 2021.

If you attended last Friday’s Homecoming football game at Carl F. Anderson Field in hopes of seeing an offensive shootout, you might have been disappointed.

But that doesn’t mean the game lacked excitement.

The host Red Hawks used a strong defensive effort to shut down a powerful Stoughton offense on their way to a 14-7 grind-it-out win.

“I’ll tell you what, the defense played outstanding,” Milton second-year head coach Rodney Wedig said. “Offensively, we’re still figuring things out. When you rotate guys in like that and you get everybody reps in practice … I feel like I’m not doing as good of a job getting them as fine-tuned as I need to be.”

Milton junior safety Jack Campion intercepted two passes and tipped a third that was also intercepted by fellow junior defensive back Gannon Kligora. The first of Campion’s picks he returned 86 yards for a touchdown to give the Red Hawks a 14-0 lead midway through the second quarter.

The Red Hawks’ special teams also played a key role. Senior Luke Hessenauer blocked Stoughton’s punt on its opening possession of the game, Campion returned a punt to Stoughton’s 10-yard line in the second half and senior Jayce Rocha boomed a few punts to help pin the Vikings deep in their own territory.

Hessenauer’s blocked punt gave Milton possession inside the Vikings’ 15-yard line. A couple plays later, senior Kyle Dehnert scored on a five-yard run to put the home squad up 7-0 with 10:10 left in the first quarter.

Campion’s pick-six in the second quarter made it a two touchdown lead, which the Red Hawks held into halftime.

After intermission, Stoughton used a drive of 5:02 to score its first and only touchdown—a 5-yard run from senior Luke Mechler with 1:36 left in the third quarter.

In the fourth quarter, Campion’s long punt return and one of his interceptions set up Milton inside the Vikings’ 10-yard line twice, but both times the Red Hawks coughed up the football with a chance to seal the game.

Instead, it was the defense that slammed the door. Stoughton started its last drive with 5:40 left in the game, running mostly out of its full-house formation. The Vikings earned a couple first downs before the Red Hawks defense eventually forced a turnover on downs near midfield with under a minute remaining.

“When they went to that full-house backfield, we were fortunate enough to win first down a couple times or create negative plays,” Wedig said. “The good thing is when they’re grinding down, the clock is running. I told my son (defensive coordinator Gus Wedig) that we had two timeouts left if we needed to get them water, and then it was getting under three minutes and they had to start burning timeouts.

“We were kind of playing cat and mouse, and they burned one first.”

Although it was Stoughton that used its timeouts, the breaks might have been a bigger benefit for the Red Hawks. Several defenders were visibly exhausted on the last drive, including Hessenauer.

“Hessenauer was so tough in there,” Wedig said. “He played outstanding.”

Wedig added that after the Red Hawks lost a close game to Waunakee to end the fall 2019 season, the coaching staff decided they wanted to build the defense up to stop the more athletic teams.

“We knew if they started grounding out, that’s not our strong suit,” Wedig said. “We did a great job of flipping personnel. ... Our defense is fun to watch.

“We knew we would have to try to create opportunities, which we did a great job of. We preached all week to win special teams, and then our defense had to hang on for dear life when they went to their full house.”

Although it wasn’t Milton’s cleanest game, Wedig was happy to be back winning at Carl F. Anderson Field for the first time in a year and a half.

“What a great atmosphere,” Wedig said. “I told the kids before the game that this is probably the first thing that is semi-normal in about a year. I’m just happy for the seniors.”

Milton, which improved to 3-1 in its alternate fall season, travels to Monterey Stadium in Janesville to take on Janesville Craig on Friday. The Cougars are 0-3 this season as their game last Friday at Fort Atkinson was canceled.