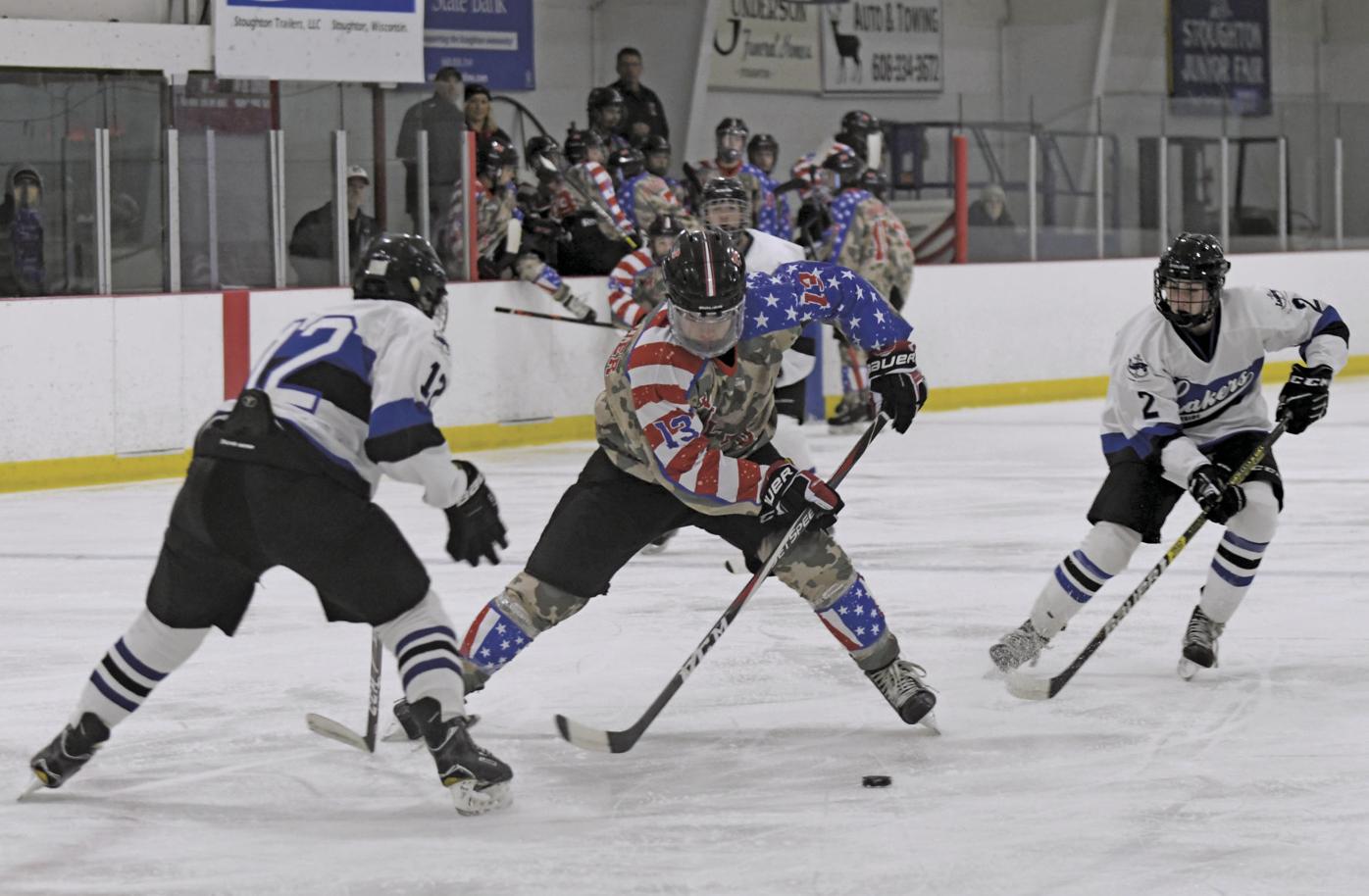 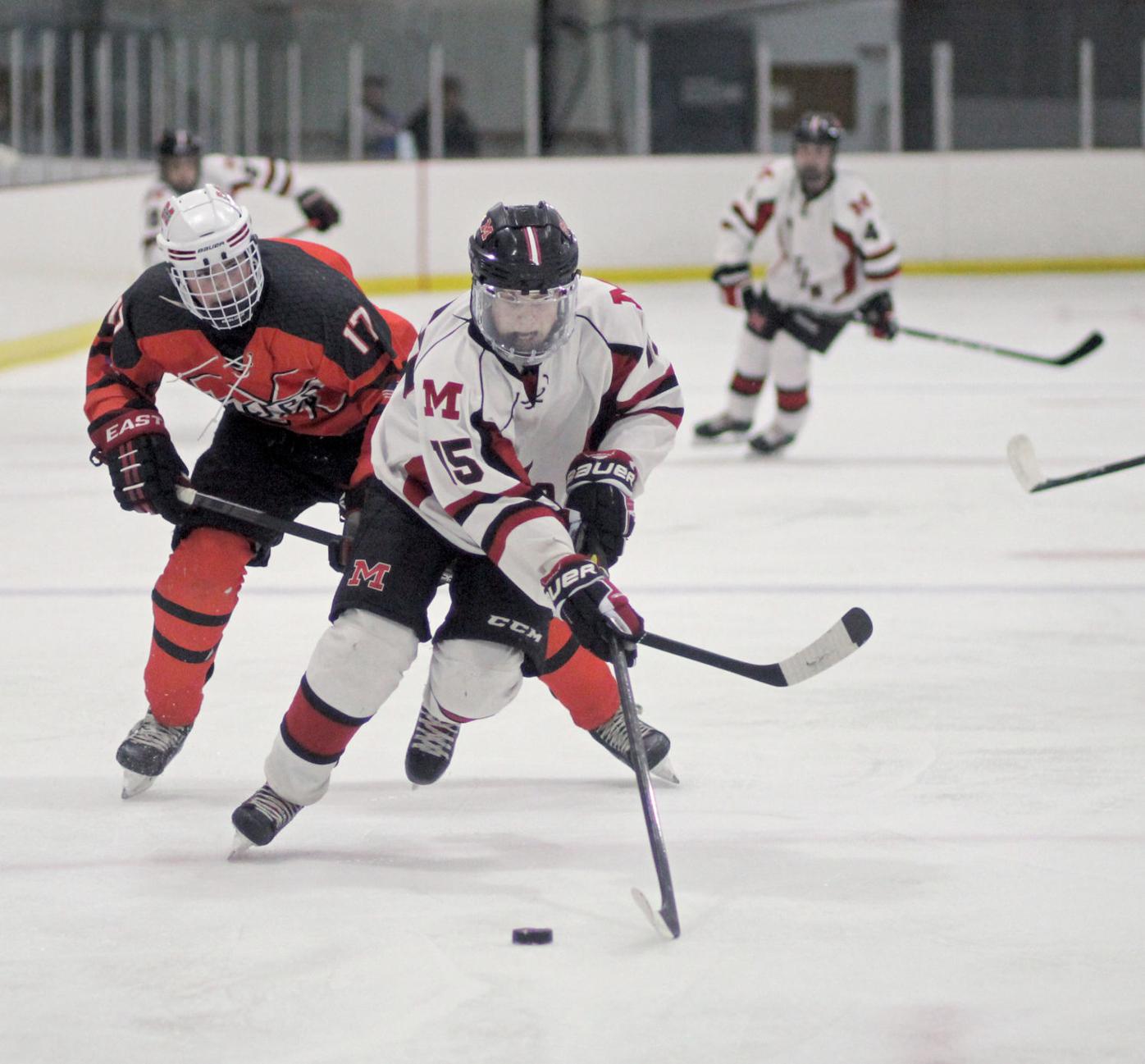 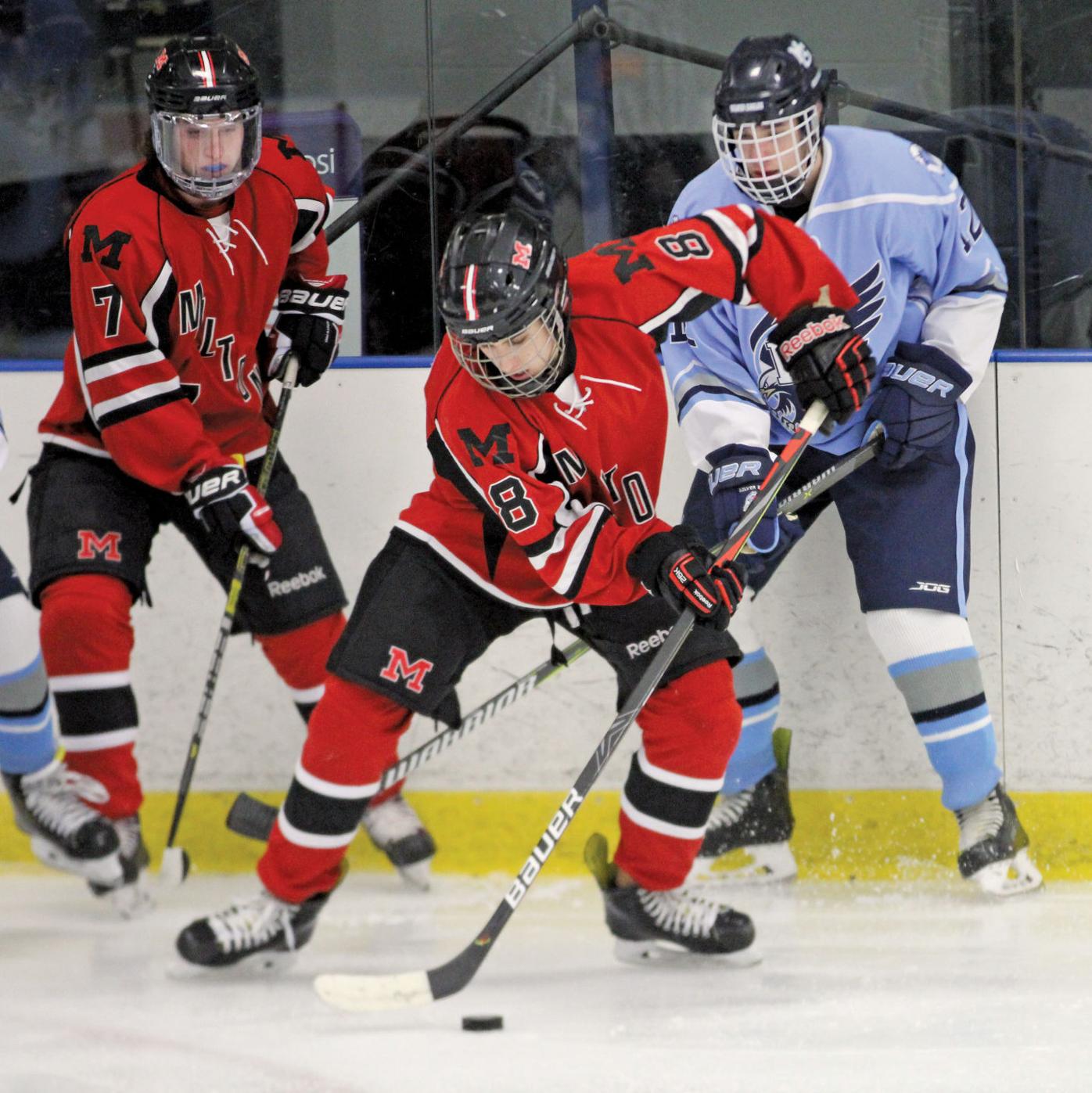 Sophomore Mitchell Masters attempts to move the puck out of the defensive zone during Milton’s 3-1 defeat to Monona Grove Dec. 5 in Madison. The Red Hawks equalized in the second period of the loss.

Sophomore Mitchell Masters attempts to move the puck out of the defensive zone during Milton’s 3-1 defeat to Monona Grove Dec. 5 in Madison. The Red Hawks equalized in the second period of the loss.

Milton High’s co-op boys hockey team did not get the result it was looking for in its season opener Saturday night.

That the team ended a nearly 10-month layoff from high school sports in Milton, though, was not lost on the Red Hawks.

They fell 3-1 to New Berlin on Saturday at Pettit National Ice Center in Milwaukee. But head coach Steve Zartmann said the excitement of his players was clear.

“It didn’t end up exactly the way we wanted it to, but it was just nice to get a game under our belt,” Zartmann said. “It was just you’re on, you’re off, you’re on, you’re off. So I asked one of our kids before the game, ‘Are you excited?’ He said, ‘Coach, we haven’t played a high school competition since the end of last hockey season.’

“They lost their spring season, and then fall sports got shifted to the spring. They hadn’t played a high school contest in almost a calendar year. So how could you not be excited?”

Adding to Milton’s excitement is the fact that many of its key players from a year ago return to the ice this winter.

The Red Hawks return their top seven scorers from last season, when they went 5-18-1.

“For the first time as our coach, I can say we’re an upperclassmen-heavy group,” Zartmann said. “We have a good core of seniors and juniors that have been around, most of them, for about three years now.”

Senior Luke Hessenauer, who was second on the team with 13 goals and 23 points last season, scored the lone goal in the season opener Saturday.

Senior forward Tyler Gilbertson, who was sixth on the team with nine points, had the lone assist on the goal.

Gilbertson is the team captain for the second straight year. The assistant captains are Wyatt Frison and Hessenauer.

“We’ve got almost all our points back from last year, so we’re really looking forward to this season,” Hartmann said. “Everybody has a real good feel for each other on the ice. Everybody knows each other’s tendencies.”

Senior Kyle Dehnert, who missed part of last season due to injury, is back in the mix, as well, along with senior Dalton Swenson, who took last season off from hockey. Storm Cook and Austin Sartell give the Red Hawks seven seniors.

“All those guys have been around for a couple years,” Hartmann said. “And it’s fun to see some of the things you work on getting engrained and just happens instead of ‘Think, process, do.’ It all just happens.”

That doesn’t mean the Red Hawks won’t have some new faces.

Perhaps most notably, they will turn to freshman Alex Jones at goalie. Jones stopped 31 of 34 shots he saw in his first start Saturday.

“He did a wonderful job. He stopped every puck he was supposed to and probably a couple he shouldn’t have,” Zartmann said. “For a freshman to step in there in his first varsity contest and do what he did Saturday was pretty incredible. He’s our guy. And we just say, ‘Here’s the keys to the truck. Have fun.’”

Additionally, while Fort Atkinson has been a part of Milton’s co-op team previously, now added to the mix are Evansville, Walworth Big Foot and Williams Bay.

“We picked up a player or two from each of those schools, and there are a couple sophomores and juniors that are going to factor into our varsity mix,” Zartmann said. “We’re also looking forward to finally having a junior varsity program where we can count on having enough kids to play when we schedule a game. There’s been times where we say we’ll play a JV game, but all of a sudden we’ve got kids hurt or out due to grades or someone quits and we can’t play.

“We have enough kids now, and that’s what you need to build a program, is to be able to give those kids some experience as freshmen and sophomores so that when they’re juniors and seniors, they’re ready to go.

“That’s a luxury we haven’t had in the past that is really going to help moving forward.”