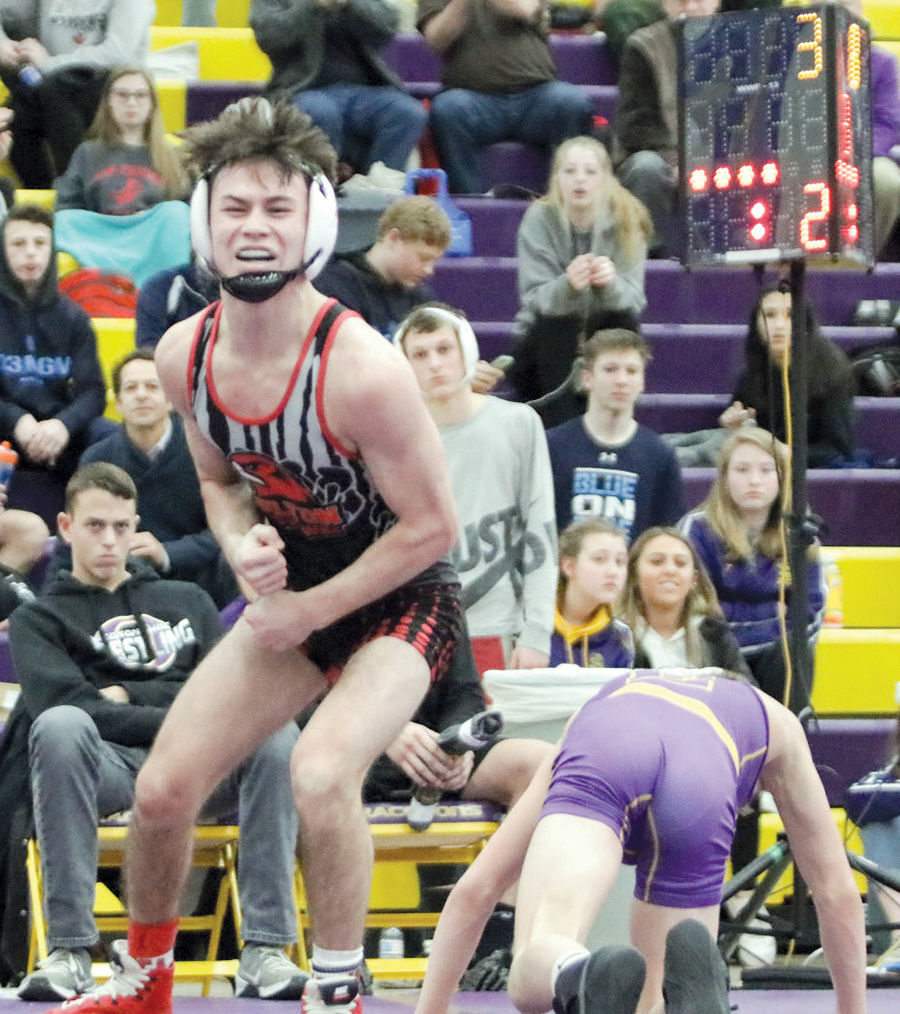 Sophomore Riley Nilo celebrates following his 5-3 sudden victory in the 106-pound championship in the Oconomowoc Division 1 sectional Saturday, Feb. 22, in Oconmowoc. Nilo heads back to the state meet for the second straight season. 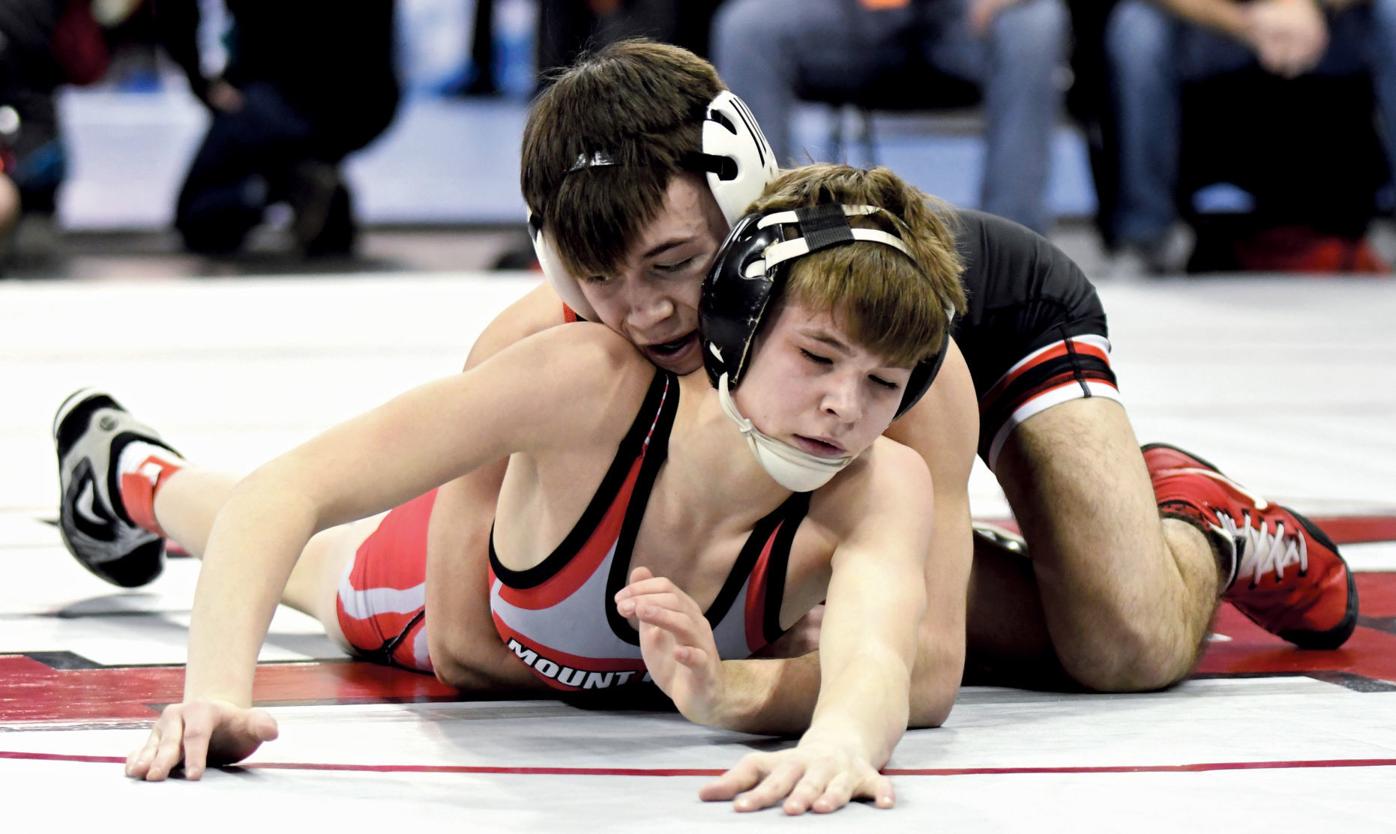 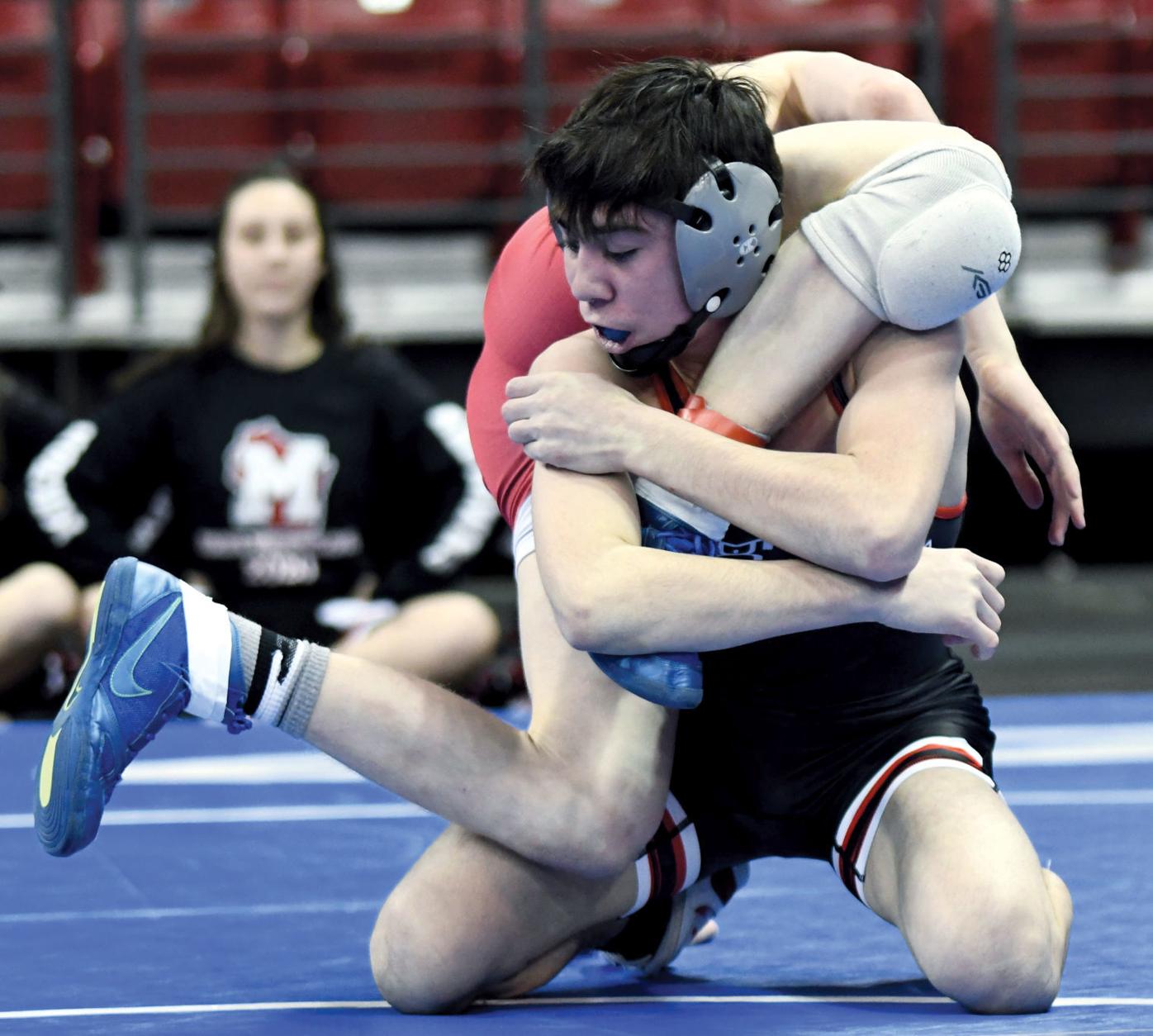 Freshman Royce Nilo was one of four Milton underclassmen to qualify for the WIAA Division 1 individual state wrestling tournament. 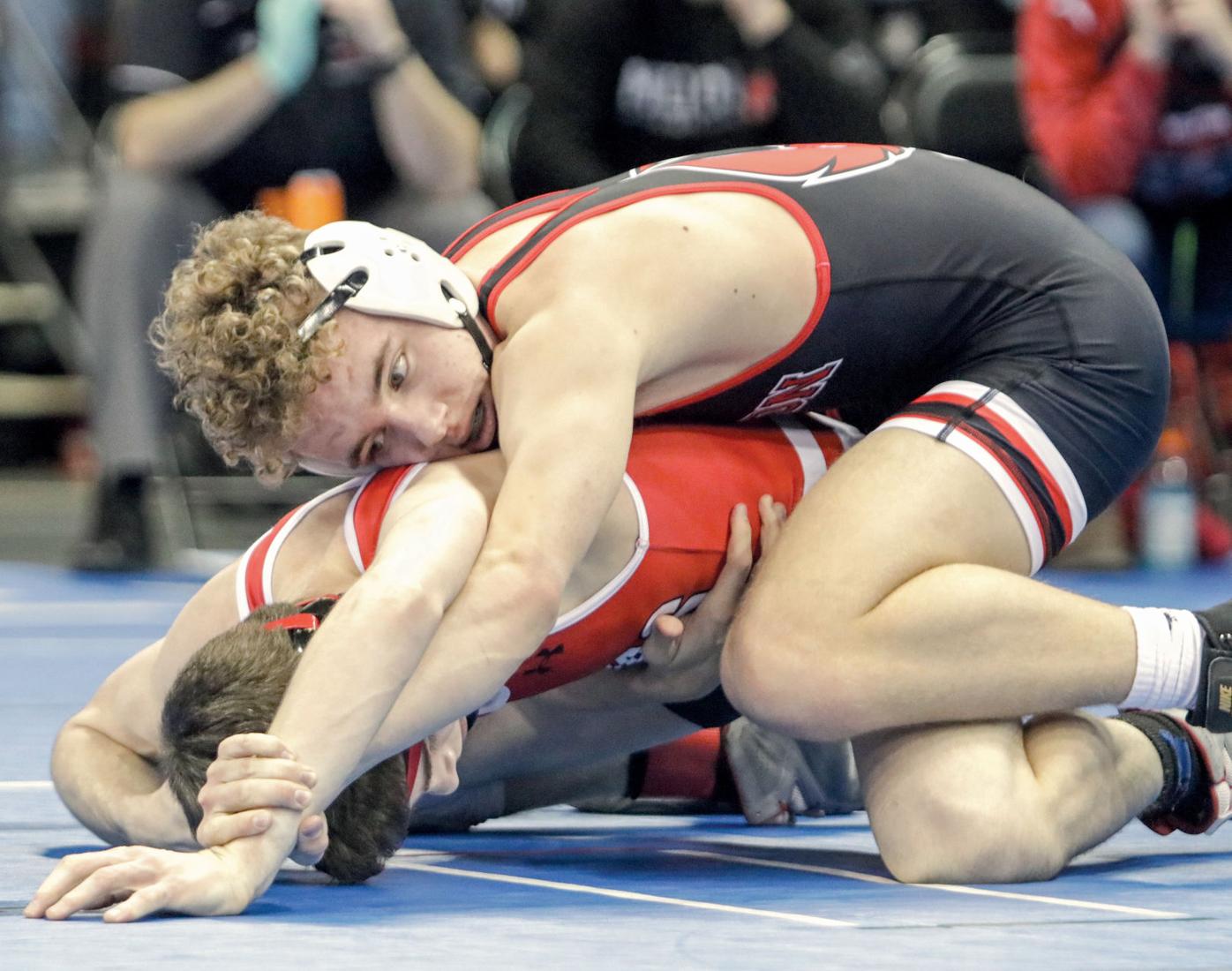 Sophomore Hunter Kieliszewski wrestles in a first-round match at the WIAA Division 1 state individual tournament Thursday, Feb. 27, at the Kohl Center in Madison. 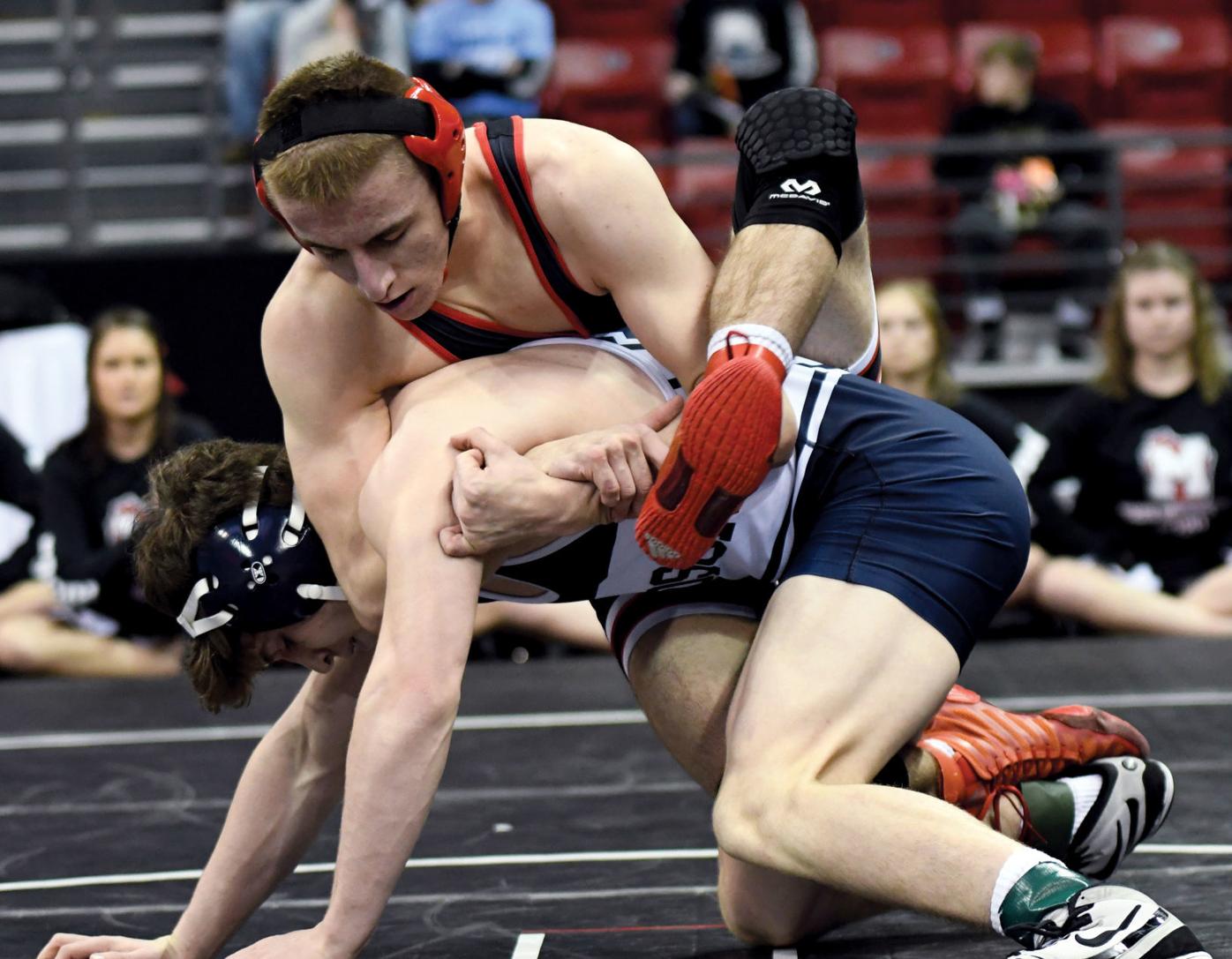 Sophomore Kade DeSormeau (top) was one of three first-time state qualifiers for Milton in the 2019-2020 season.

Sophomore Riley Nilo celebrates following his 5-3 sudden victory in the 106-pound championship in the Oconomowoc Division 1 sectional Saturday, Feb. 22, in Oconmowoc. Nilo heads back to the state meet for the second straight season.

Freshman Royce Nilo was one of four Milton underclassmen to qualify for the WIAA Division 1 individual state wrestling tournament.

Sophomore Hunter Kieliszewski wrestles in a first-round match at the WIAA Division 1 state individual tournament Thursday, Feb. 27, at the Kohl Center in Madison.

Sophomore Kade DeSormeau (top) was one of three first-time state qualifiers for Milton in the 2019-2020 season.

Starts, stops and uncertainty take their toll on athletes in every sport.

Wrestlers almost certainly have an argument that they have it the toughest.

Milton High wrestling coach Patrick Jauch said the uncertain nature of the winter sports season took its toll on his student-athletes, but he also believes wrestlers are used to dealing with adversity. And for that reason, he and the Red Hawks maintain high hopes heading into their shortened winter campaign.

“The struggles of this past year related to COVID have really revealed a lot about people in terms of what their emotional stability and mental toughness has been built on,” Jauch said. “Wrestling does the same thing. It exposes who you’ve been and how you’ve prepared yourself physically, mentally and emotionally to deal with difficult circumstances.

“I think we’ve had a few extra mental and emotional challenges in terms of thinking we were going to get started on time Nov. 23, only to be told the season was effectively canceled and then have the season reinstated in December.”

“But tough times don’t last, tough people do,” he said. “And we’ll be working to get tougher every day.”

The state’s wrestling teams have been limited to duals only as part of COVID-19 protocols. The Red Hawks have three duals on the schedule—including Tuesday’s at home against Watertown that took place after The Courier’s print deadline. The hope is that it will all lead up to a WIAA tournament series that includes regional, sectional and state tournaments in February.

“I’ve had to modify how I would normally construct our practice schedule, with the goals of getting kids opportunities to compete and getting the team put together and ready for regionals,” Jauch said. “With so much of these kids’ lives getting shut down and taken away from them, we need to be grateful to be getting these opportunities to practice and compete.”

Jauch and the Red Hawks return a strong core of wrestlers from a year ago, including four—all who were sophomores or freshmen—who qualified for the WIAA state tournament in Madison.

“They are all back and all four of them … have a great chance to build on their successes from last season,” Jauch said. “You might not see them all in the lineup right away as they get their weights stabilized, but one of our goals is to use the next few weeks to get our team put together and as strong as possible.”

Milton has three seniors, Jauch said. Trey Smith and Justin Sanchez each finished fourth at sectionals last season, while Andrew Hoard is a two-time qualifier to the Wisconsin Challenge Series, which is essentially a JV state tournament.

Jauch also pointed to a couple newcomers that could make an impact for Milton. Jauch said freshman Aeoden Sinclair is someone “we expect big things from this year and in the future.” And junior Michael Schliem is a transfer from Oregon “who is extremely talented and hard-working and an excellent leader, as well.”

Despite perhaps just having a few dual meets to prepare and having a tough regional and sectional draw in the tournament, the Red Hawks will still have lofty goals.

“We’ve been reloading the last few seasons, and COVID has been tough on us in terms of shutting down our summer training … but we still have big goals,” Jauch said. “Our regional and sectional are probably the toughest in the state this season, so when we get guys through to state, we can plan on them coming home with state medals around their neck, and that’s the goal.

“If we get our whole team put together by regionals, we’ll be putting pressure on Mukwonago and Stoughton during the tournament series. We have multiple individuals in our room that I believe have the ability to be on the podium at the state meet and win state titles the next few years.”