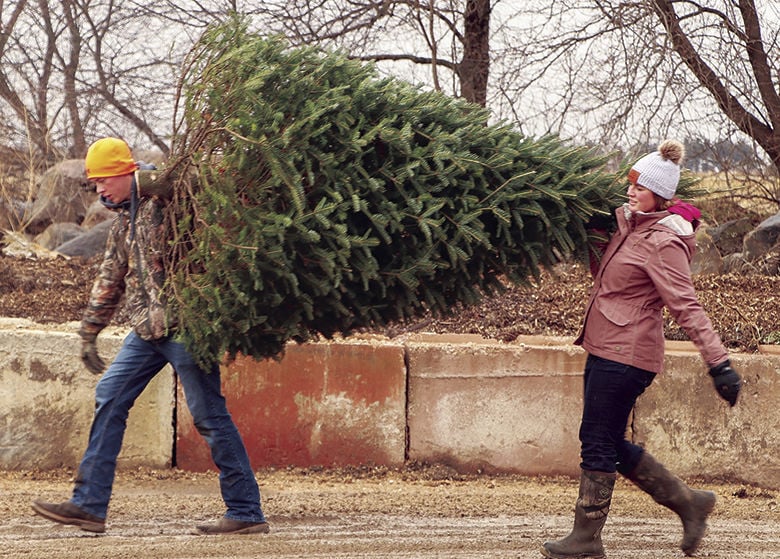 These two prepare to load up their tree from East Wind Christmas Tree Farm last year. Owner Mark Bursaw had to open more fields to not only keep shoppers socially distanced, but to open up more stock. 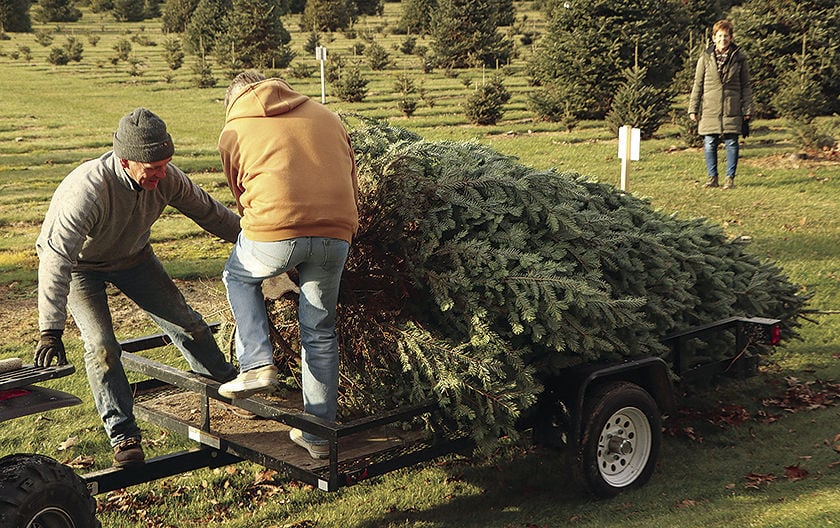 Alan Motl, left, helps load a tree last year at Riverside Christmas Trees. This year, the tree farm needed to close Dec. 5 after Motl’s stock was depleted. While many small businesses have suffered during the pandemic, Christmas tree farms continue to see a boom in customers.

These two prepare to load up their tree from East Wind Christmas Tree Farm last year. Owner Mark Bursaw had to open more fields to not only keep shoppers socially distanced, but to open up more stock.

Alan Motl, left, helps load a tree last year at Riverside Christmas Trees. This year, the tree farm needed to close Dec. 5 after Motl’s stock was depleted. While many small businesses have suffered during the pandemic, Christmas tree farms continue to see a boom in customers.

In a year when small businesses have been overwhelmingly negatively impacted by the pandemic, it seems the coronavirus hasn’t been able to compete with a traditional seasonal purchase – Christmas trees. The customers and sales are even trending a bit better this year as people find one activity that COVID-19 hasn’t been able to cancel.

Locally, tree farms in Marshall – Riverside Christmas Trees and East Wind Christmas Tree Farm – have found people were ready for the businesses to open for the season; East Wind owner Mark Bursaw had customers calling even before he opened for the 2020 season.

“Demand was so high, we decided to open a full week earlier,” he said.

Both tree farms opened Nov. 22, a week sooner than during the typical year. Alan Motl, owner of Riverside Christmas Trees, wanted to provide a longer season than usual due to coronavirus. He believed it would help reduce the amount of people who usually come Thanksgiving weekend.

Motl initially planned to stay open through Dec. 13. Instead, he needed to close Dec. 5; his 2020 stock had already been depleted.

Bursaw still has trees in stock, including the popular painted trees that often draw people from Highway 19. He plans to keep East Wind open through Dec. 24 though by that time the business becomes a “ghost town. We might get a few families whose kids have just gotten back from college coming out but otherwise, people already have their trees.”

This is the third year Bursaw has owned East Wind and, so far, 2020 been a very good year. According to him, the tree farm has already done more business in the first three days of operation than the entire 30 days of the first season.

“We’ve been extremely blessed with the amount of people who have come here,” Bursaw said. “It’s been crazy… we just had some more precut trees arrive the other day.”

In an effort to provide extra space to allow for social distancing, as well as more trees to choose from, East Wind opened up all of its tree fields. One of the fields had an abundance of 12-foot trees but is already depleted.

Normally, 80% of Riverside’s sales are Thanksgiving weekend and the first weekend in December. According to Motl, Nov. 27 was a record sales day for Riverside.

This is not the first year Riverside Christmas Trees have sold out the yearly stock; it also sold out in 2019 though not as quickly.

“In the last few years, there has been a good demand for real trees and we still get new customers,” he said.

Riverside might be closed but people driving past the farms may notice there are still acres of conifers. Motl explained each season there is a certain amount of stock for sale and overselling has a major impact on future years.

“You can’t catch up once you get behind on inventory,” Motl said.

Unlike other crops, such as corn, it takes years to grow a tree to at least 7 feet tall and the majority of the trees he sells are at least 8 feet.

“When you plant a tree, you’re looking at it being ready eight years down the road,” Motl said.

Bursaw has already ordered thousands of tree seeds that he plans to plant in the spring.

In talking with other people, Motl has heard more people are looking to have a real tree this year as a way to lift their spirits during a less-than-joyful year.

“They’re just looking for something to get them excited and happy,” he said.

“We want to make this a good experience for customers,” he said. “Give them a happy memory for this year.”