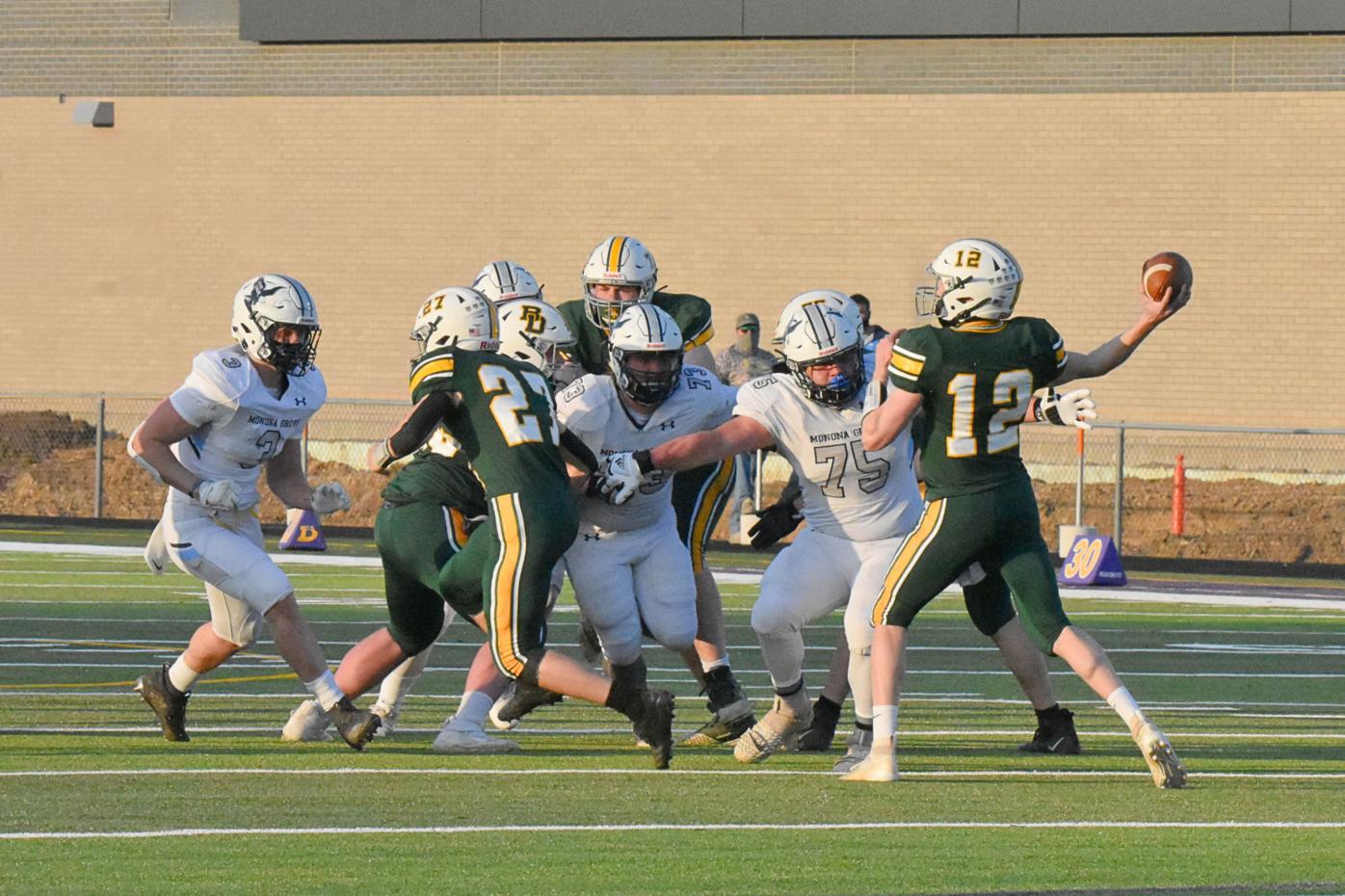 The Monona Grove defensive line closes in on Beaver Dam quarterback Carter Riesen in the first half of MG’s 26-18 loss to Beaver Dam on Saturday. 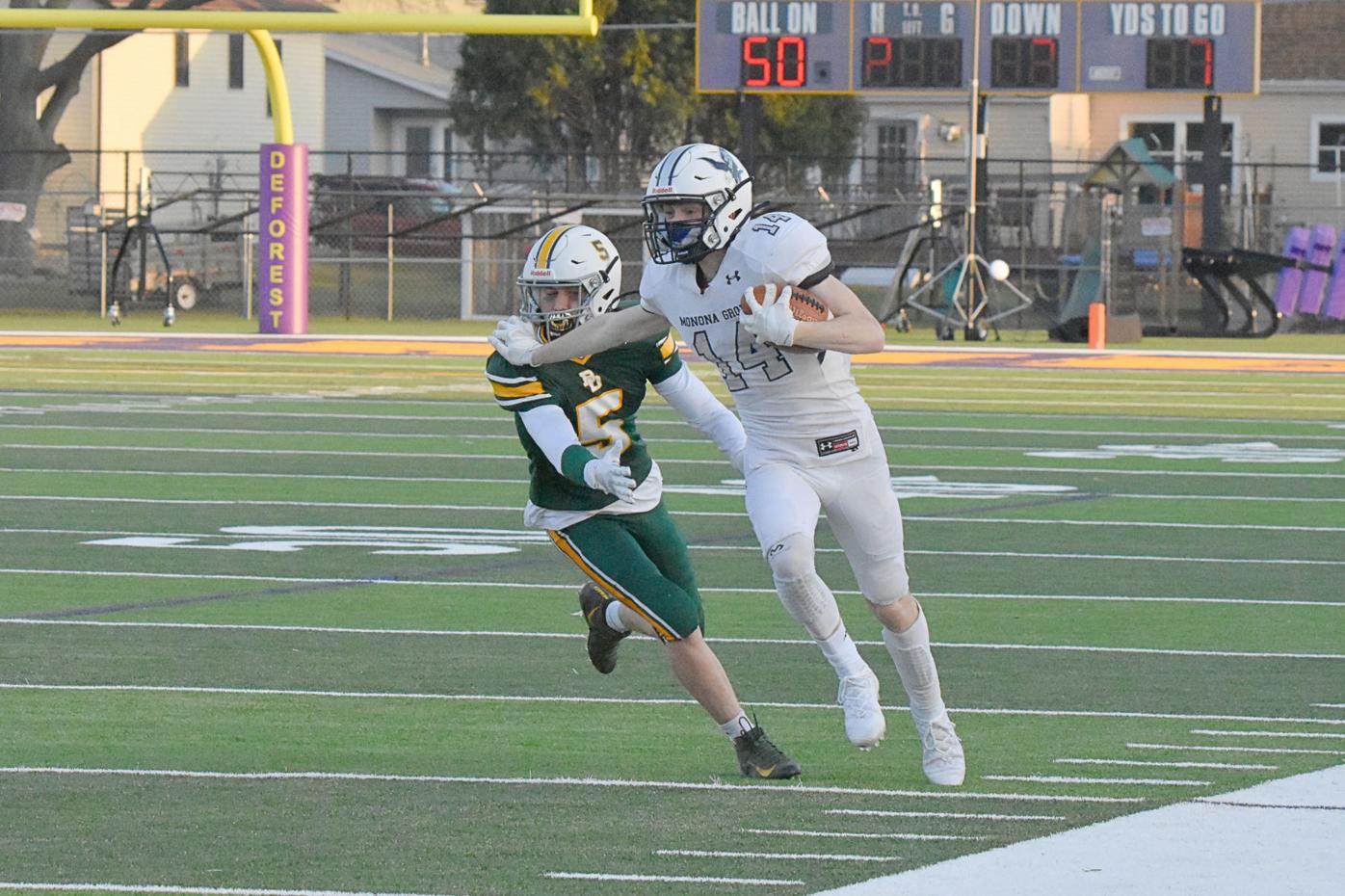 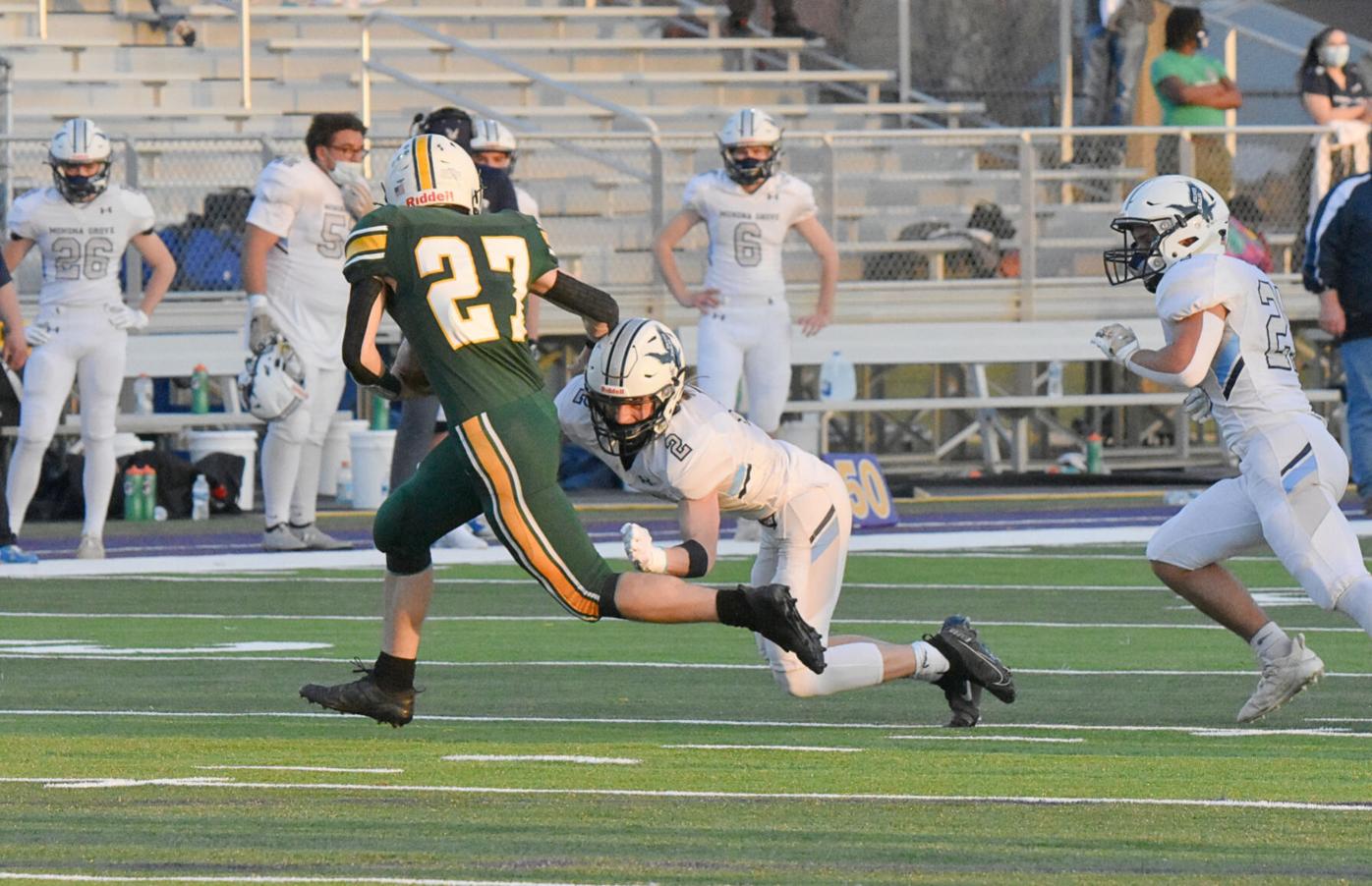 Dylan Matuzak makes a play on the outside. Matuzak also intercepted a pass in the game. 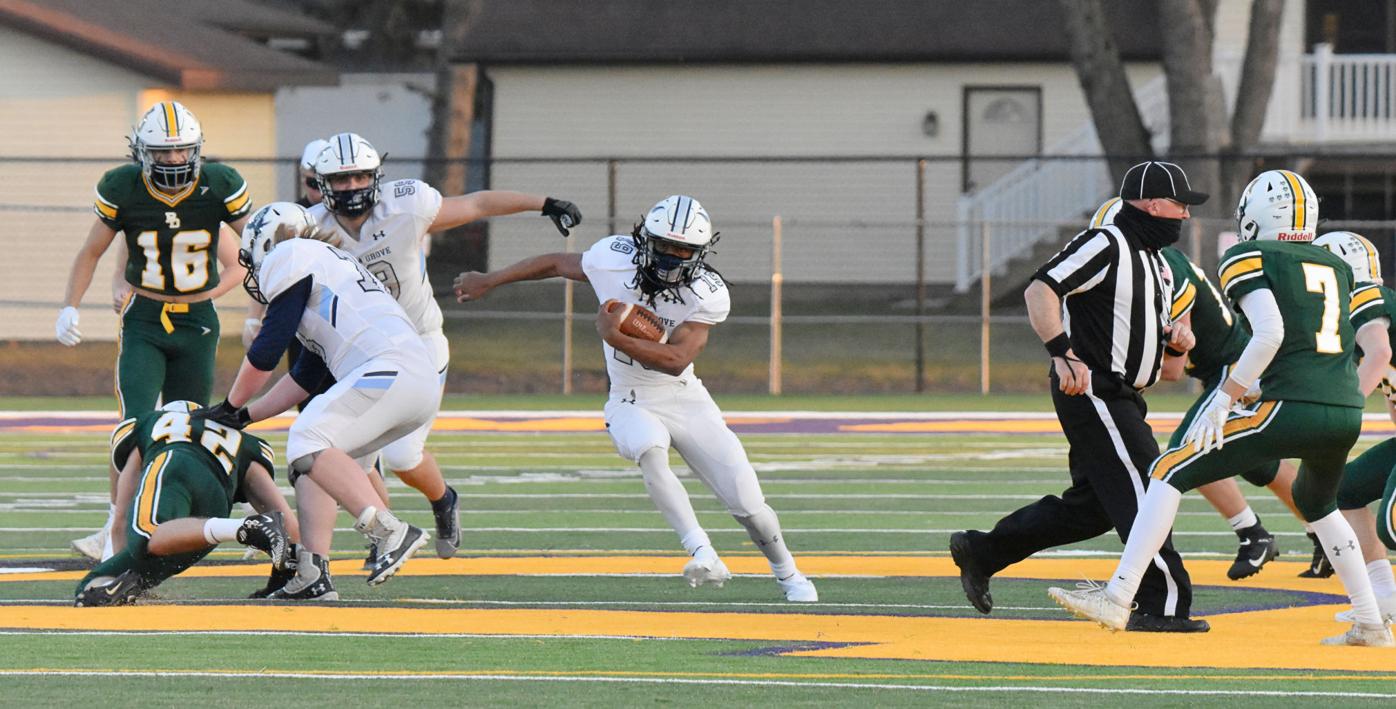 Fabian Jackson finds a gap and bursts into the secondary against the Golden Beavers. He ran 19 times for 98 yards, scoring one touchdown.

The Monona Grove defensive line closes in on Beaver Dam quarterback Carter Riesen in the first half of MG’s 26-18 loss to Beaver Dam on Saturday.

Dylan Matuzak makes a play on the outside. Matuzak also intercepted a pass in the game.

Fabian Jackson finds a gap and bursts into the secondary against the Golden Beavers. He ran 19 times for 98 yards, scoring one touchdown.

A couple of fumbles came back to haunt the Monona Grove Silver Eagles on Saturday, as Beaver Dam put up 20 points in the fourth quarter to leave Dane County with a win.

The Golden Beavers and Silver Eagles struggled for points throughout the first three quarters of Saturday’s matchup in DeForest, but Beaver Dam posted 20 points in the final 10 minutes of the game to grab a victory.

Monona Grove fumbled on its first drive after stringing a couple of good plays together. That would be a theme for Monona Grove, as the Silver Eagles would fumble five times in the game, four of which were recovered by Beaver Dam. On this occasion, the MG defense held up, with two sacks on Beaver Dam’s ensuing possession.

Beaver Dam took the lead on the first play of the second quarter, with a 27-yard touchdown pass from Carter Riesen to Nate Abel doing the final damage. The drive started at the Monona Grove 48 yard line after a 15-yard penalty on the punt.

MG would answer, however. Taking over near midfield, MG drove down and Fabian Jackson punched in from two yards out to tie the game at six with 9:03 to play in the half.

The first play of Beaver Dam’s next drive resulted in a loose ball that appeared to be recovered by the Silver Eagles, but the side judge came in to rule the runner down before the ball popped loose, much to the disappointment of the Monona Grove sideline.

MG’s defense would hold tight and give the offense a chance to take the lead. A long toss to from Casey Marron to Owen Croak got MG down to the Beaver Dam one-yard line, but again, a referee’s decision didn’t go the Silver Eagles’ way.

Jackson got the handoff to the left side and tried to reach his way in for the score when he lost the football. This time, the referee made the opposite call, ruling that a diving Jackson had not crossed the plane of the end zone prior to the fumble.

The two teams went into the half knotted at six.

In the third quarter, MG would take a 12-6 lead on a 28-yard touchdown to Tyler Dahlhauser, who quarterback Casey Marron just missed in the corner of the end zone on fourth down late in the first half. This time, the pair connected to give their team the lead on the first drive of the second half.

MG’s defense held strong again until the fourth quarter, when Riesen found Alex Soto for a 34-yard touchdown. Kailey Walters hit the extra point to give Beaver Dam a 13-12 lead with 10:04 to play.

After a Beaver Dam drive stalled, MG got the ball back but fumbled again to give Beaver Dam the ball at the Silver Eagles’ 31. A fourth-down pass from Riesen to Abel for 22 yards put the Beavers four yards out and Riesen found Soto for another score with 4:32 to play. A two-point conversion was no good, but Beaver Dam still led 19-18.

On the kickoff, the Golden Beavers took another giant leap toward victory when the Silver Eagles fumbled again, their fifth and final fumble of the game.

Six plays later, Riesen was in the end zone after a three-yard touchdown scamper, but the game wasn’t over, with MG trailing 26-18.

After seven plays, MG stood at the Beavers’ 37, but Marron’s final pass was intercepted in the end zone by Abel.

MG out-gained Beaver Dam 351 to 229 in total offense, but MG turned the ball over five times to Beaver Dam’s one.

Marron was 17-for-33 passing for 258 yards, with two touchdowns and one interception, which came on his last-second heave. Seven of those passes found Croak, who finished with a team-high 114 yards. Dahlhauser had 75 yards on four catches and Hoier had three grabs for 39 yards.

Jackson ran 19 times for 98 yards and a touchdown.

MG’s Dylan Matuzak had an interception in the game.

The Silver Eagles (1-1) will look to bounce back Friday against Stoughton on Friday.