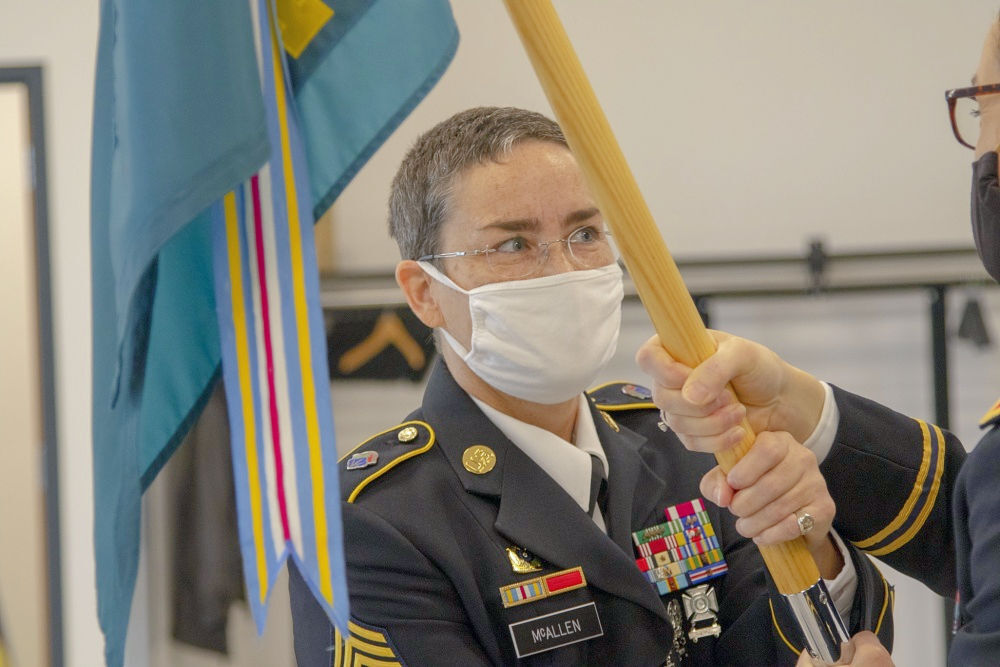 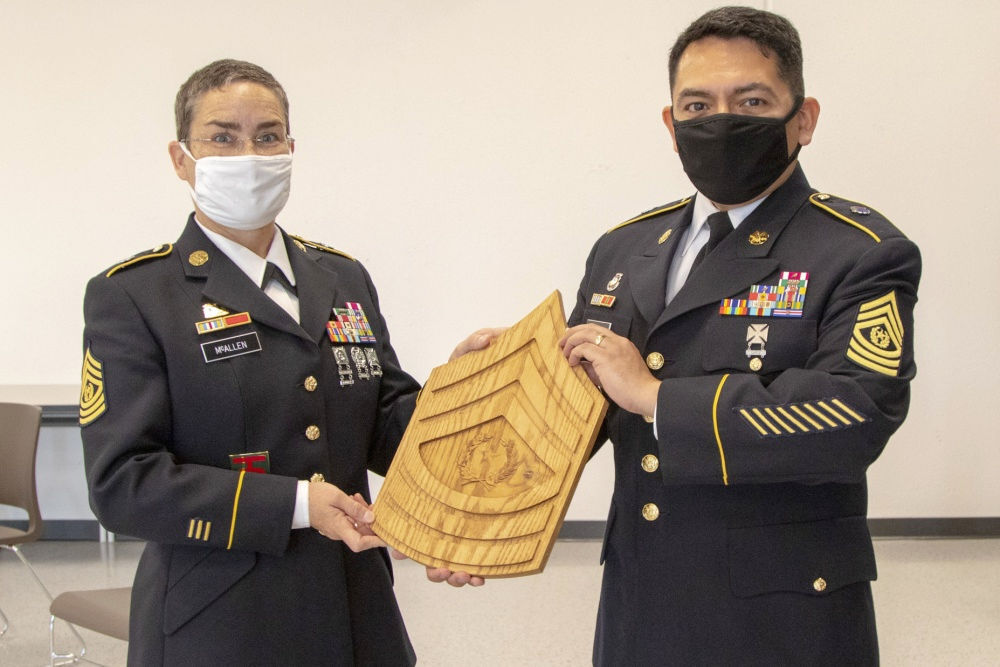 Command Sgt. Maj. Kerry McAllen has such a passion for guiding and mentoring Soldiers that she found it difficult to envision a life that did not include donning her military uniform.

Like many career soldiers in the U.S. Army Reserve, she worked to earn a 20 year letter to secure a retirement. McAllen, serving in the 318th Theater Public Affairs Support Element, continued to serve another 11 years after securing the coveted document because she could not picture herself ever leaving the job and not working alongside her comrades.

“We had been in a family business together for so long that it felt like the end of an era when he passed away, said McAllen, who runs McAllen Properties, located just off the Beltline on Madison’s east side.

With so much extra work to do as a result of his passing, she started thinking it may finally be time to put her boots on the shelf and her dog tags in the drawer, to make “more time for herself.”

McAllen, who grew up in Cottage Grove and graduated from Monona Grove High School in 1990, attended a retirement planning event in December of 2019 hosted by the 88th Readiness Division out of Ft. McCoy, Wisconsin. McAllen learned about the benefits for which she was entitled.

McAllen also learned the lengths the Army Reserve goes to honor its retirees through ceremonies. She started allowing herself to picture what retirement entailed, and made the decision that she would leave in 2020.

Before McAllen applied for retirement, a global pandemic reached the shores of America. She submitted her packet in April, when the spread of the disease was developing. She, like most Americans, believed COVID-19 would disappear quickly and life would return to normal.

“The information we all had was that we were going to flatten the curve and get over this by the end of summer. Summer weather was going to help get rid of the disease,” McAllen said. “Nobody was anticipating this [pandemic] still going on this late. I figured by August I would have my orders and join one of the large retirement ceremonies.”

She was excited at the prospect of that culminating event to honor her more than 31 years of service to the Nation as an Army Reserve Soldier – service that included a deployment to Iraq in 2009 where McAllen served with the 90th Sustainment Brigade as the liaison officer for the general officer who oversaw logistics for all of Iraq. She continued to advance in her career until concluding with the appointment of command sergeant major for the 318th TPASE, serving as the senior enlisted advisor.

McAllen looked forward to that moment when her duty and commitment to the many units she served in her career would be honored. She even relished the thought of Soldiers, family and friends being there to celebrate the moment with her. McAllen was hopeful of reconnecting with soldiers with whom she had bonded over the course of her career because it was likely some would attend the ceremony.

But her hopes were dashed when the pandemic continued to surge. The Army Reserve was impacted by the same restrictions that plagued the nation. Big retirement ceremonies like the one McAllen had planned for were halted. Instead, crowd size was scaled down to less than 25 people so that people could adhere to social distancing guidelines.McAllen was not going to be able to invite everyone with whom she had wanted to celebrate her retirement. She said she would have definitely invited her mother and other family members that would have traveled to Illinois from all over Wisconsin.

McAllen has what she described as a “close knit group of friends” and fellow members of her Veterans of Foreign Wars (VFW) post that she would have also sent invitations. She had even planned on reconnecting with a friend who lived in Illinois with whom she served with in Iraq.

Nevertheless, the Soldiers of the 318th TPASE surprised McAllen with a small retirement sendoff on her last day of battle assembly this month. The ceremony was held in conjunction with a change of responsibility where McAllen passed the guidon to her replacement, Command Sgt. Maj. Anthony L. Taylor.

McAllen still intends to have her full retirement honors in a post pandemic environment. For now though, she said what the Soldiers of the 318th TPASE did for her “was great,” saying, “I was surprised and appreciated that the Soldiers pulled it off. It felt really good.”

Her girlfriend, Kelly Kopacz, was able to attend the festivities with her. McAllen said that Kopacz was touched by the Soldiers’ efforts and “was trying really hard not to cry.”

After her duty was done, McAllen departed the Army Reserve center one last time. She then did what warms her heart. She stopped off at her local VFW to celebrate with fellow veterans.