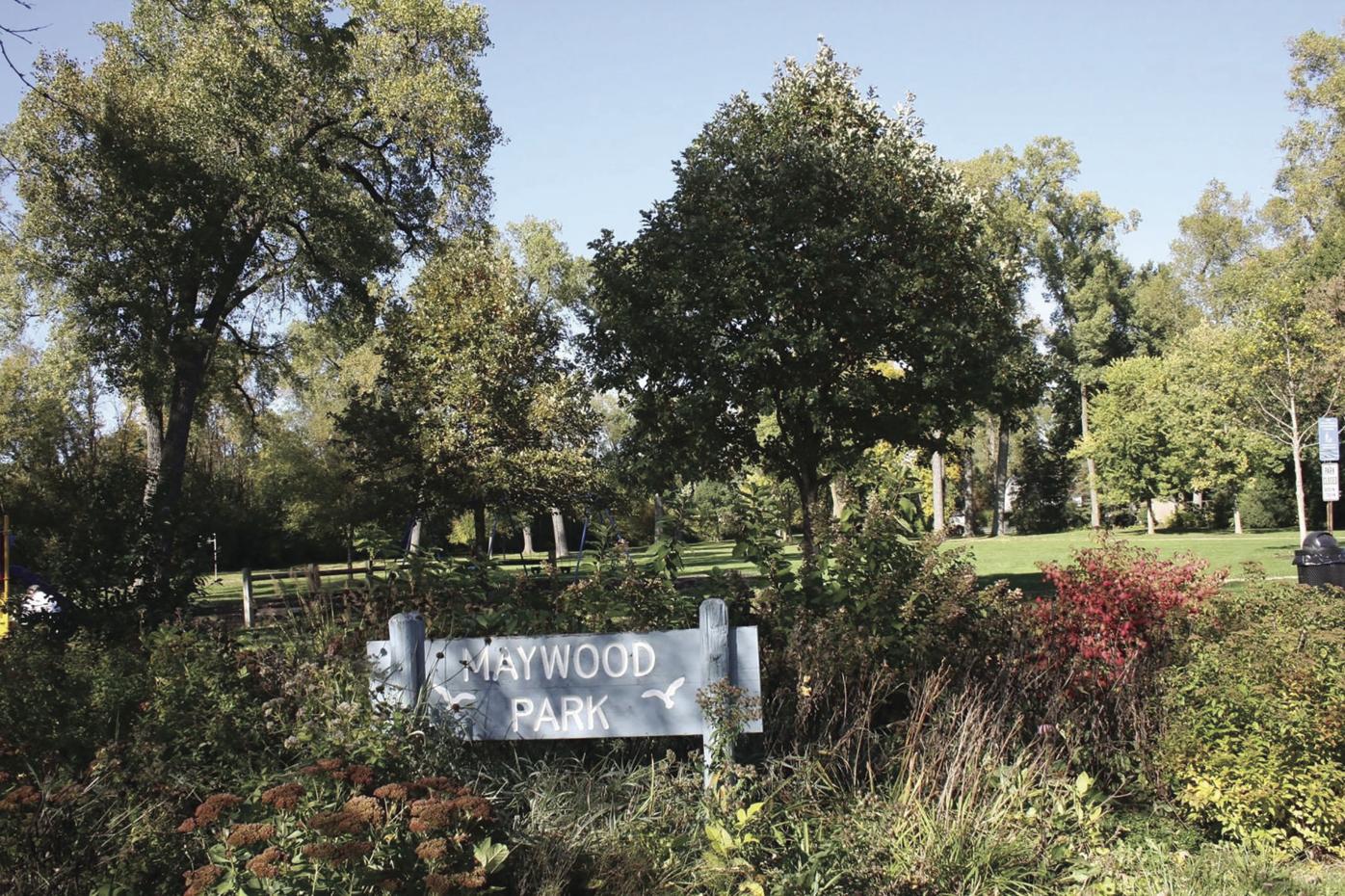 Maywood Park in Monona could be the potential home for a new mountain bike trail.

Bennet Chapa, one of three local fifth grade boys behind the proposal, presents an aerial map of the proposed trail at a Feb. 25 public input meeting.

A new mountain bike trail might be making its way to Monona.

On Feb. 25, the city hosted a public input session regarding the possible addition of a mountain bike trail in Monona’s Maywood Park.

The idea was concocted by three local fifth and sixth grade boys: Bennett Chapa, Miles Peterson, and Jack Oliver. Chapa, Peterson, and Oliver brought the idea to the city of Monona Parks & Recreation Board several months ago, and the motion is now set to be voted on by the board in March.

All three boys indicated a love for mountain biking as the main motivation behind pushing for the addition of a trail. The only major mountain biking trails in the area are located a 20 or more minute car ride away, making it difficult for younger kids in Monona to easily access the trails.

Maywood Park was chosen as the location for the potential trail due mainly to its terrain, location, and the perceived under-utilization of the park as it is now. A full walk-through of the proposed path of the trail can be viewed on the city’s YouTube page, at the 7:30 mark of the video titled ‘Park & Rec Mountain Bike Public Meeting 022521.’

The park used to belong to the Ho-Chunk tribe, which the boys acknowledged at the public forum.

“We wanted to do a land acknowledgement because this land used to belong to someone else, and we really wanted to show them some respect,” said 10-year-old Chapa. “The parks in our city were first Ho-Chunk land, and in the past the government took away land from the Ho-Chunk tribe, and they were also forced to give up the land and leave the state. We respect the Ho-Chunk land and their nation.”

According to parks personnel, last week’s public input session was used as a means to gather feedback from the public to better refine the proposal before it makes its way to a vote later in March.

In a survey distributed to the public prior to the Feb. 25 input meeting, results showed 87% of respondents in support of building the trail, and 13% opposed. Out of the 157 individuals who took the survey, 97% were Monona residents.

A majority of respondents listed the playground and the sledding hill as their current main uses of Maywood Park, and nearly 70% named mountain biking as the recreational activity they would most likely want to see available at Maywood in the future. Respondents said they would utilize a mountain biking trail, if available, roughly once a week.

Approximately 63% of respondents indicated seeing no potential issues with the addition of a Maywood Park mountain bike trail, but for those who did raise concerns, parking, environmental damages, and increased biker traffic on roadways were among the indicated issues.

On the positive side, many who said they would be in favor of the trail cited health benefits and an enhanced quality of life for Monona residents as their main reasons for support.

Monona resident Ken Walz said that while he is supportive of the overall proposal, his biggest concern would be the safety of children as they navigate to the park.

“The one thing I would like to suggest to the board as you’re planning is think more holistically about bike infrastructure in Monona and how kids would get to and from Maywood Park to use these trails,” Walz said. “If they’re just riding down Winnequah St. to get there, they’re going to go over the hill and have to cross from the south side of Winnequah St. to the north side to get to Maywood Park, and there’s no crossing there... it would be a dangerous route for kids to be traveling.”

Walz suggested the city consider installing a bike corridor connecting Winnequah Park to Maywood Park as a safer alternative route for kids to take as they travel to the potential mountain bike trail.

City Councilor and Chair of the Parks & Recreation Board Doug Wood said the board has been in discussion about the possibility of a trail leading from the north end of the park to Nichols Road.

Some other prominent concerns raised by community members at the input session included questions on the trail’s vicinity to residential property lines, as well as drainage or erosion issues as the grassland surrounding the trail floods following heavy rainfalls.

Mike Reypak, director of planning and design at the International Mountain Biking Association (IMBA), said Chapa, Peterson, and Oliver have been in consultation with him during the planning process and he has full faith that the boys’ proposal addresses those concerns.

“When we’re designing trails we look at drainage and how water flows and we’re also looking at neighbors and how trails will interface or not interface with neighboring properties,” Reypak said. “The boys definitely reached out to the right people to get involved in the project...they’ve got some great resources on their hands to take the project to the next level.”

A vote on the project will take place at the Tuesday, March 9 Parks and Recreation Board meeting, which is set to be held virtually at 6:30 p.m. via Zoom. If it passes, the proposal will then be presented to the city council. Meeting information can be found on www.mymonona.com.