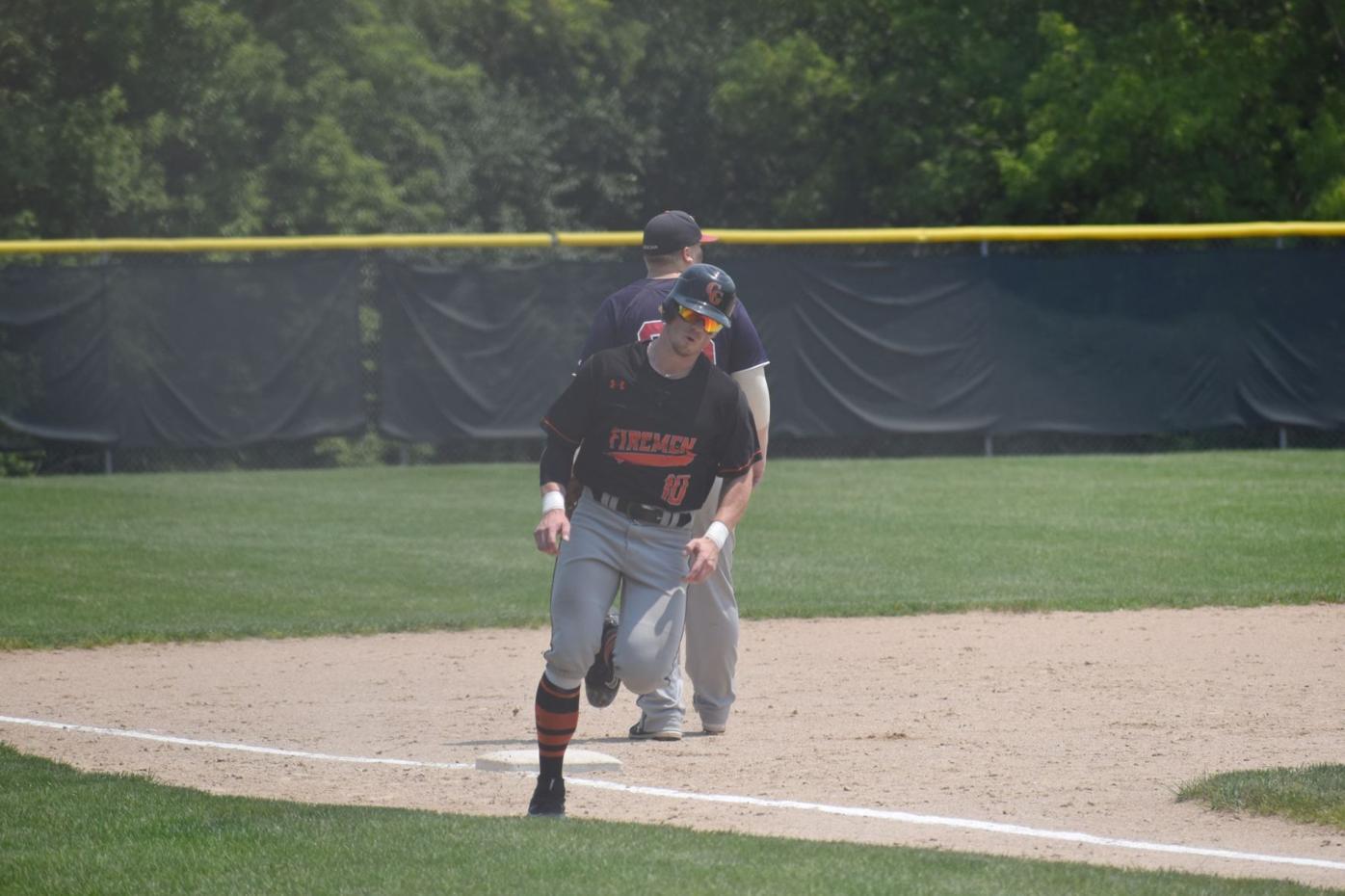 Graham Schroeder-Gasser rounds third and heads for home in Cottage Grove’s 15-9 loss to the Monona Braves on Sunday, July 4. 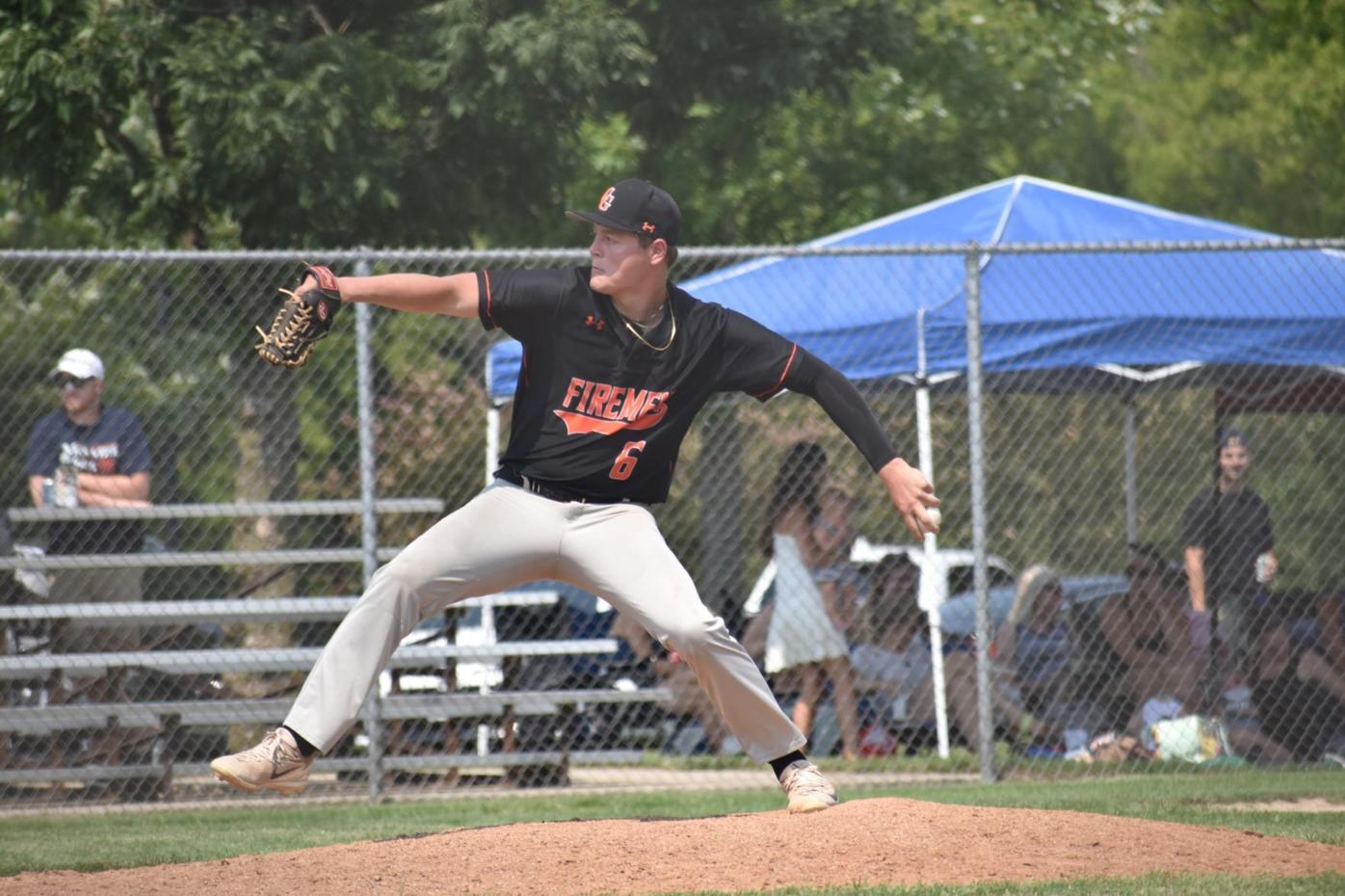 Mitch Kelsey throws a pitch in Cottage Grove’s 15-9 loss to the Monona Braves on Sunday, July 4. Kelsey pitched over three innings in relief, striking out two.

Although Cottage Grove sprung out to an early lead against the Monona Braves, the Firemen could not hold on, falling 15-9 on Sunday, July 4.

After Monona took a 1-0 lead after the first inning, Cottage Grove scored six runs in the top of the second to take a 6-1 lead. The Firemen chased Monona starting pitcher Corey Schmidt out of the game in the middle of the second.

“We’ve seen Corey quite a few times so we know what he’s got, he’s not going to fool us with anything,” said Cottage Grove manager Bob Blakley. “I think he was just right around the zone, but our guys were ready to hit that second inning and we put up six runs. They say hitting is contagious, and I think it was.”

In the second, after singles by Graham Schroeder-Gasser and Pete Strommen, Mitch Kelsey smacked a double to drive in a run. A wild pitch scored Strommen, giving the Firemen a 2-1 lead.

A sacrifice fly by Alan Myrold drove in a run, and a double by Tristen Herber scored another run. A single by Paul Patten drove in two, taking the Firemen up 6-1.

Four runs by the Braves in the bottom of the second, three in the fourth and two in the fifth gave Monona a 10-6 lead. With the Cottage Grove pitchers stretched thin, Blakley called on Kelsey to pitch in relief.

“He’s not one of our main guys, but he jumped in today in a pinch, having to eat some innings for us and I think he pitched very well for having to do that,” said Blakley.

Mitch Kelsey throws a pitch in Cottage Grove’s 15-9 loss to the Monona Braves on Sunday, July 4. Kelsey pitched over three innings in relief, …

The Firemen’s best chance for a rally came in the seventh after Dan Karlin-Kamin scored with nobody out on an RBI double from Herber, cutting the lead to 10-7. However, Herber was stranded at second after a flyout, strikeout and another flyout got Monona out of the inning.

Monona opened up the game with a run in the bottom of the seventh and four runs in the eighth, pushing the lead to 15-7.

An RBI double by Strommen and an RBI single by Scott Schultz in the ninth cut the deficit to 15-9, however a line-out dashed the Firemen’s hopes of a comeback.

Next up for the Fireman is a trip up to Montello on Friday night for a game against the Granite Jaxx.

“That’s a good thing about having this many games is that you have to forget about the last one and focus on the next one,” said Blakley. “We got the week off to give our pitcher some rest, and it’ll be nice to play Friday and then have the weekend off.

The loss drops Cottage Grove to third place in the Eastern Section standing with a 4-3 record.

The Cottage Grove Firemen picked up an 11-3 victory over the Sun Prairie Red Birds on Saturday, July 3.