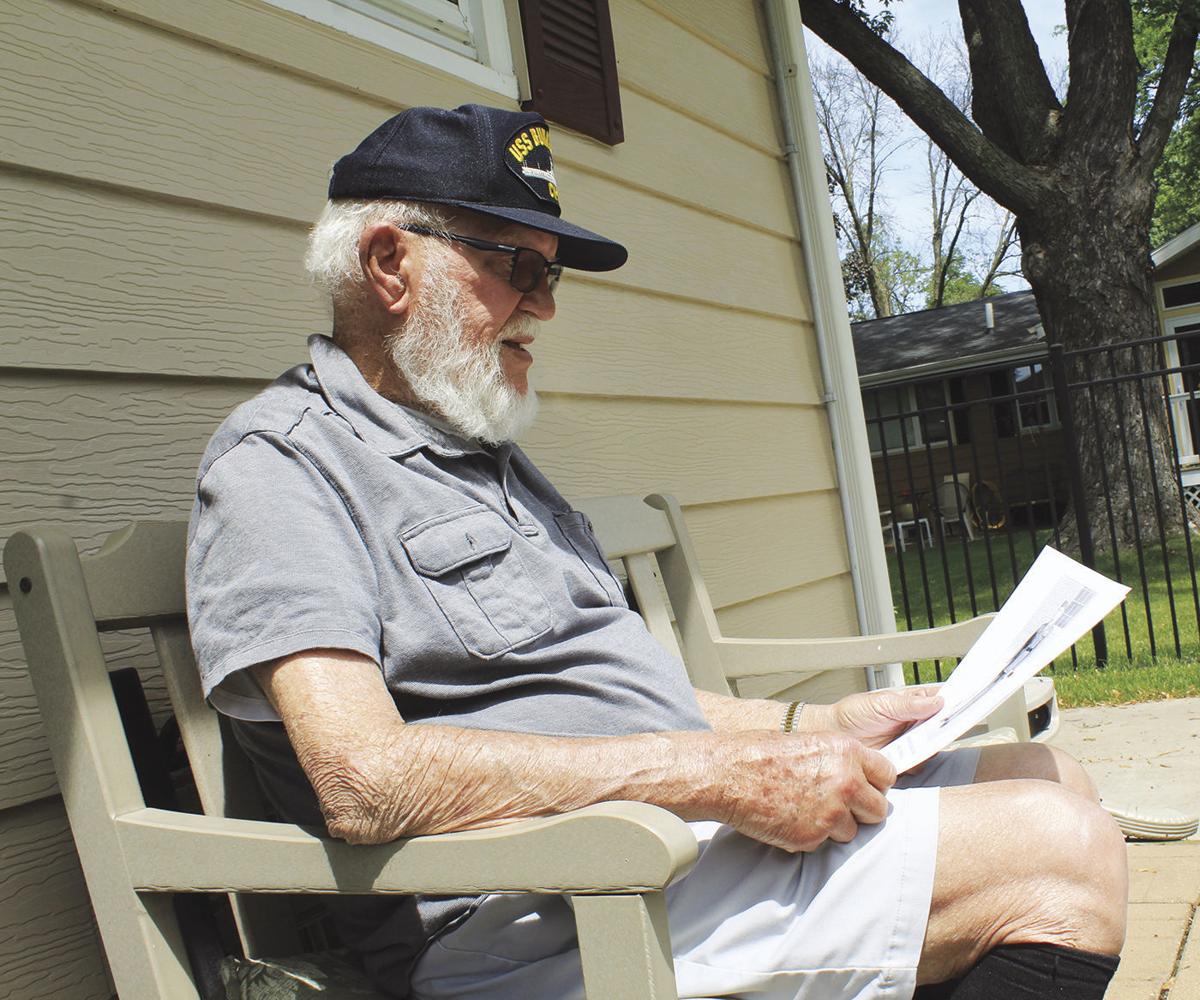 Bill Rock looks over some notes he’s made about his time in the Marine Corps in the 1940s. 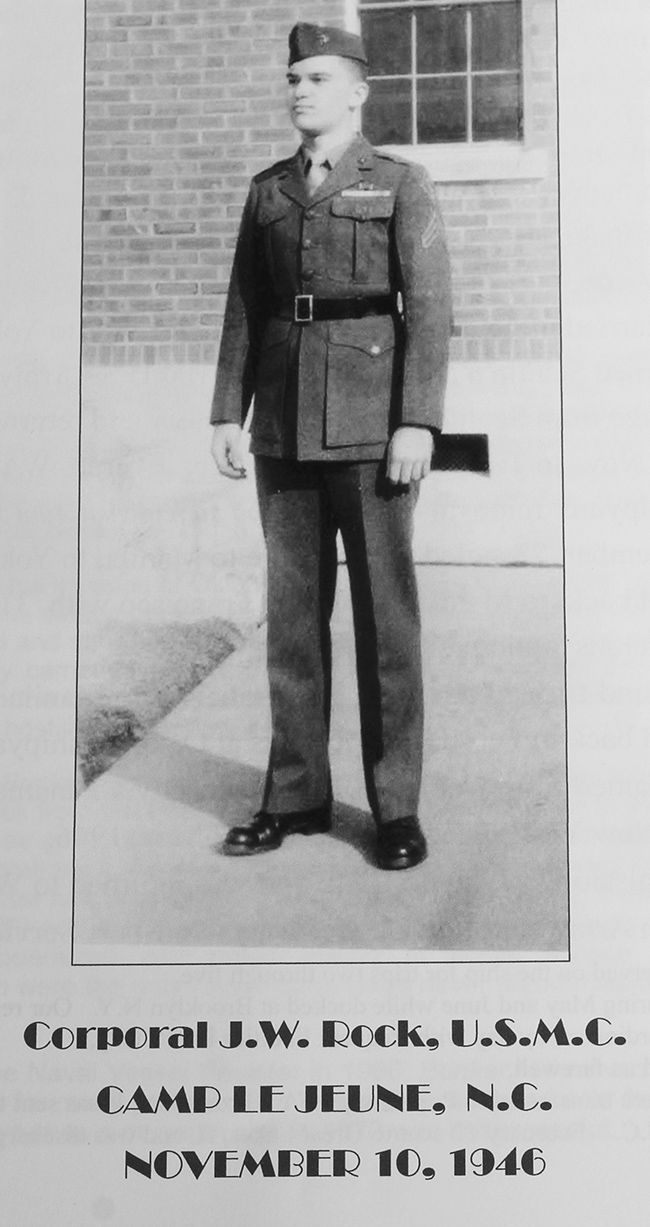 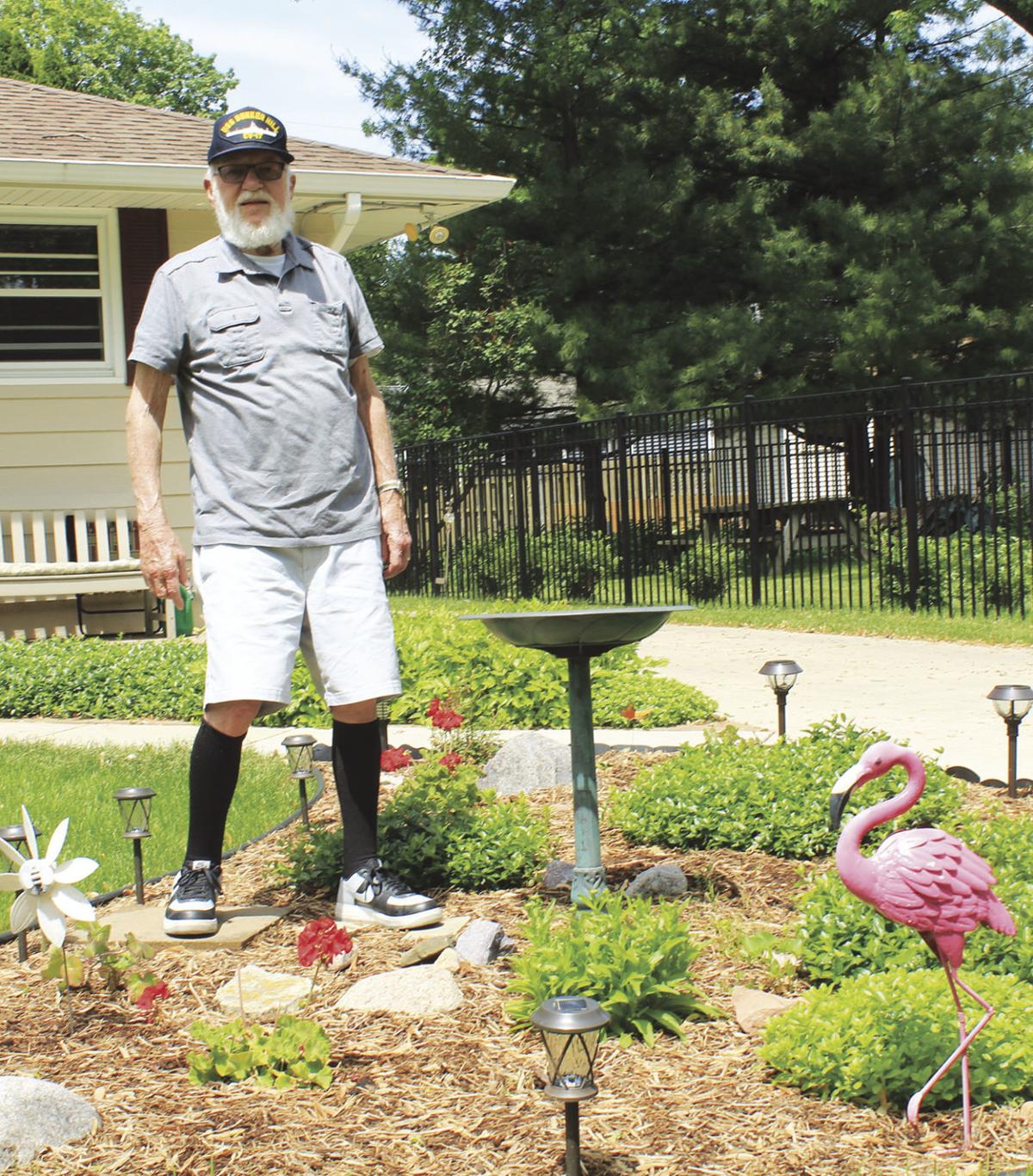 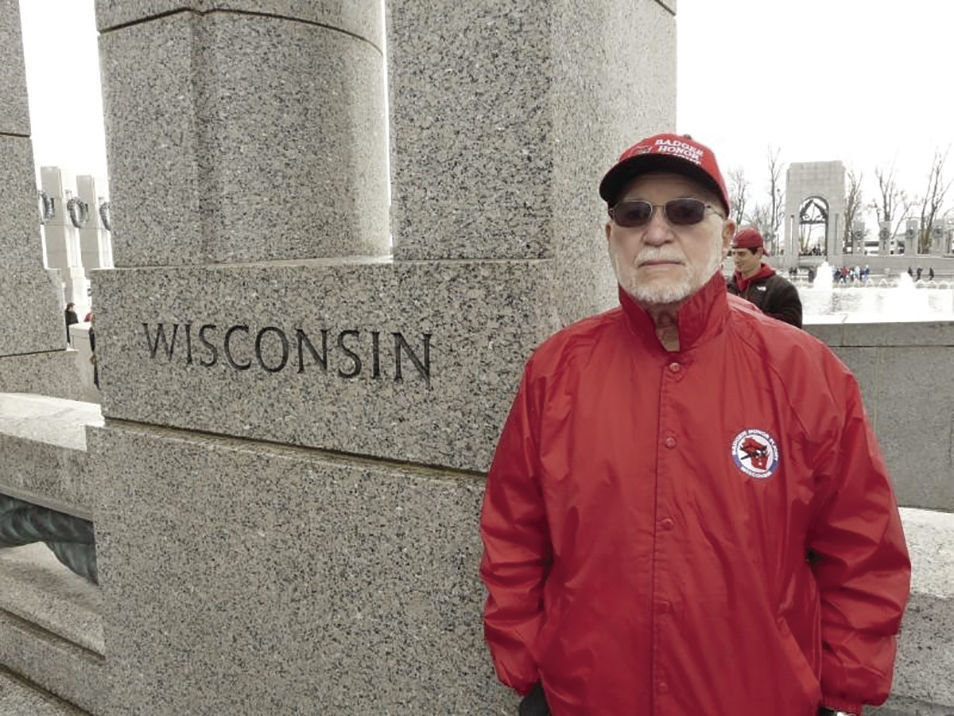 Bill Rock stands next to the Wisconsin column of the World War II Memorial in Washington, D.C.

Bill Rock looks over some notes he’s made about his time in the Marine Corps in the 1940s.

Bill Rock stands next to the Wisconsin column of the World War II Memorial in Washington, D.C.

J.W. “Bill” Rock served 27 months in the U.S. Marine Corps, including several months near the end of World War II.

“I wasn’t a hero, but I served with heroes,” the Monona resident said.

Many would beg to differ with that assessment.

Like most teenage boys and young men in Little Chute in the 1940s, Rock couldn’t wait to get into the military and fight for the United States in World War II.

“I enlisted. I’ve very proud of that,” he said. “I was 17 years old. My entire high school (career) was spent during World War II, from Pearl Harbor right on up. What was your choice if you were healthy?”

The older brother of his best friend was a marine and a veteran of the Second Battle of Guadalcanal. He returned to his high school and was in his full dress blues, Rock recalled.

“I was a kid. He was a battle-scarred veteran,” said Rock, now 93. “Harold and I decided to go down and enlist in the marines in January 1945. He didn’t pass the physical, but I did. I went down Jan. 16 and enlisted for four years.”

Rock said if he didn’t enlist – for which he got to choose his branch of service – he would have been drafted on his 18th birthday with no choice of where he would serve.

For Rock, he went to boot camp at Parris Island in South Carolina and then combat training at Camp Lejeune in North Carolina. His regimental commander was Lewis Burwell “Chesty” Puller, the most decorated marine in American history.

“While I was in boot camp, the marines landed on Iwo Jima. That was a bloody affair,” he said. “When the sergeant said to us, ‘This isn’t the Boy Scouts …’”

From the East Coast, Rock went west to San Diego for sea school and then to Washington State, where he was assigned to the aircraft carrier USS Bunker Hill.

“I don’t think I was afraid,” he said. “I was actually classified as a light anti-aircraft machine gun crewman on the aircraft carrier.”

With the war ending in the summer of 1945, the USS Bunker Hill became a troop transport ship, sailing first to Hawaii and then to Japan and the Philippines, picking up more than 3,000 troops each time.

“The Bunker Hill sailed to Hawaii, took troops there and came back,” Rock said. “I crossed the Pacific six times, bringing troops back. And we sailed around through the Panama Canal.”

Ironically, some of Rock’s closest calls came after fighting had ceased.

“On the first trip to Japan, there were Japanese mines floating in the Pacific. We nearly hit one,” he said.

A marine shot at it to blow it up.

“We think it was around 200-250 yards offshore. You could see it. All you could see when it would bob up – it was kind of windy that day – it would bob and then go down underneath, you couldn’t see it, then it would kind of float up,” Rock said. “When that thing went off, fortunately, none of the shrapnel came to the ship, because we were standing all over. We could have been hit. A plume went up in the air like you wouldn’t believe, and there’s a shockwave that came through.”

The USS Bunker Hill was eventually decommissioned, and Rock was sent first to Virginia and then back to Camp Lejeune.

“In January 1947, the marines said because you served during the war and because you were overseas, you qualify for early discharge,” he said.

Rock went home in March 1947, discharged as a corporal after serving 27 months.

When Rock first enlisted, he believed the war was going to go on for a long time.

“When we heard about D-Day in Europe and started hearing all that stuff, my buddy said … ‘You know, for God’s sake, the war’s going to be over, and we won’t be able to get in it,’” he said. “We wanted to be part of it. All the young men from Little Chute were going, some were getting killed, and we wanted to go.

“I had no illusions. I went in the Marine Corps, and all I can remember at boot camp, they said, ‘Let the other (guy) die for his country. You live for yours.’”

As an only child, Rock needed permission from his parents to enlist.

His father was an Army veteran from World War I and a longtime member of the American Legion.

His mother’s grandmother’s husband was killed serving with the Union Army during the Civil War.

An uncle through marriage enlisted in the Army in 1909 from Arkansas. He fought in the Philippines and in France, and went on to serve with Douglas MacArthur.

The military background and the desire to serve meant a little less fear for Rock.

“I guess during the training some of the guys that were training us had been veterans and had been to sea and were under aircraft attack,” he said. “You know, what it was like to sit behind your gun and watch these guys flying at you determined to kill you. Never dawned on us. We didn’t worry about it. We just went out and did our jobs.”

He doesn’t have any regrets about not being in combat. He said he had some ribbons and patches, and when he was with servicemen who had been in combat, no one ever said anything to him about not being on the ground.

“I was proud of what I had,” he said, recalling years later Tom Brokaw’s book “The Greatest Generation.” “That kind of gave me confidence – yeah, I’m still important, I offered my services, I tried.”

Back in Wisconsin, Rock attended UW-Madison and joined the Reserves for three years, leaving just before war broke out in Korea.

He met his future wife, Verdeen, who was living in Monona. They have been city residents since May 1987. Each had been married before, and between the two of them, they had 11 children.

Rock retied Dec. 31, 1990, as the manager of public relations for western Wisconsin for AT&T.