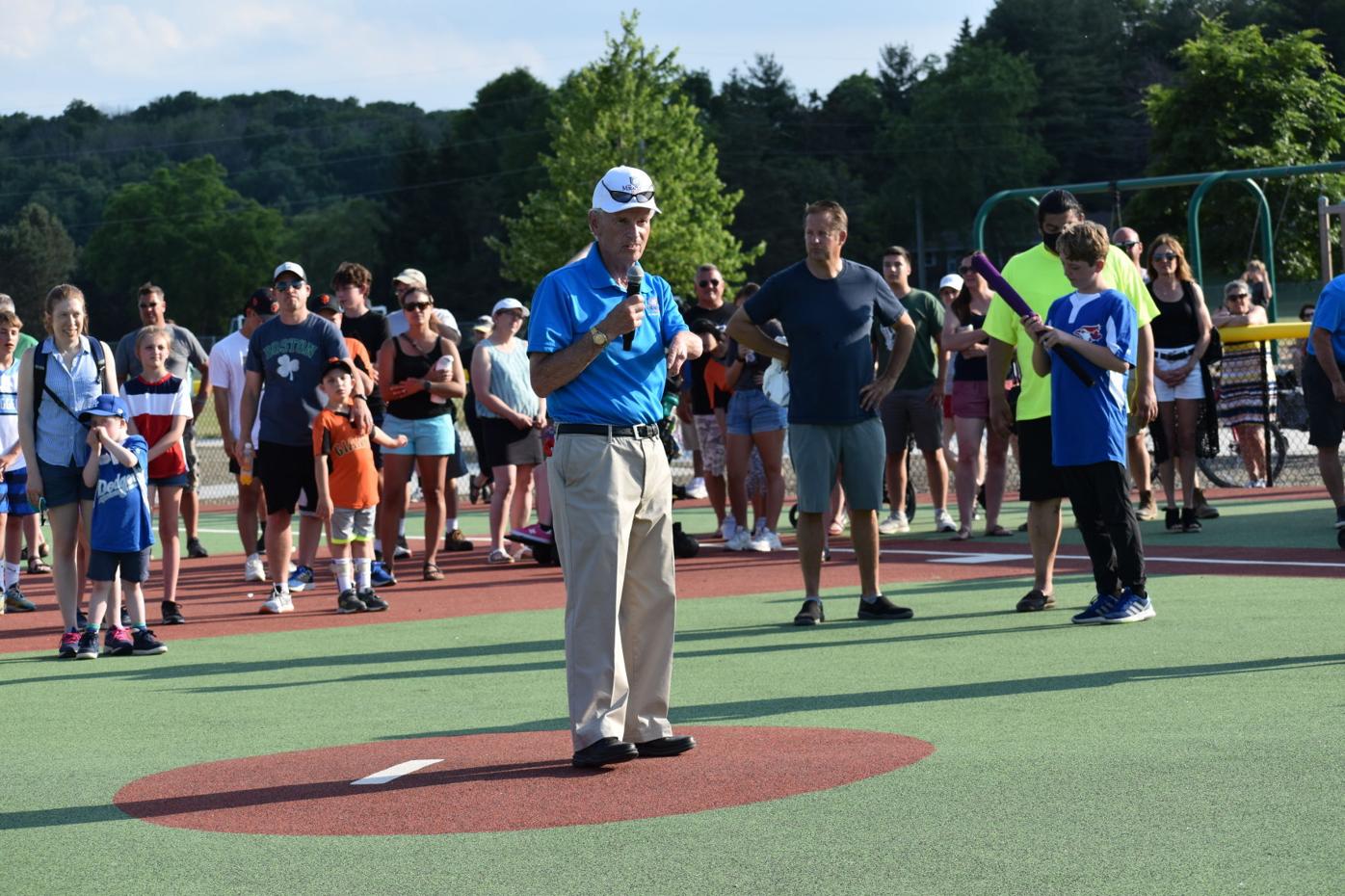 Miracle League executive director Bill Schultz gives a speech at the opening of the Miracle Field in Bakken Park. Schultz, who was denied the opportunity to play little league baseball was inspired by a news story he saw about the Miracle League. 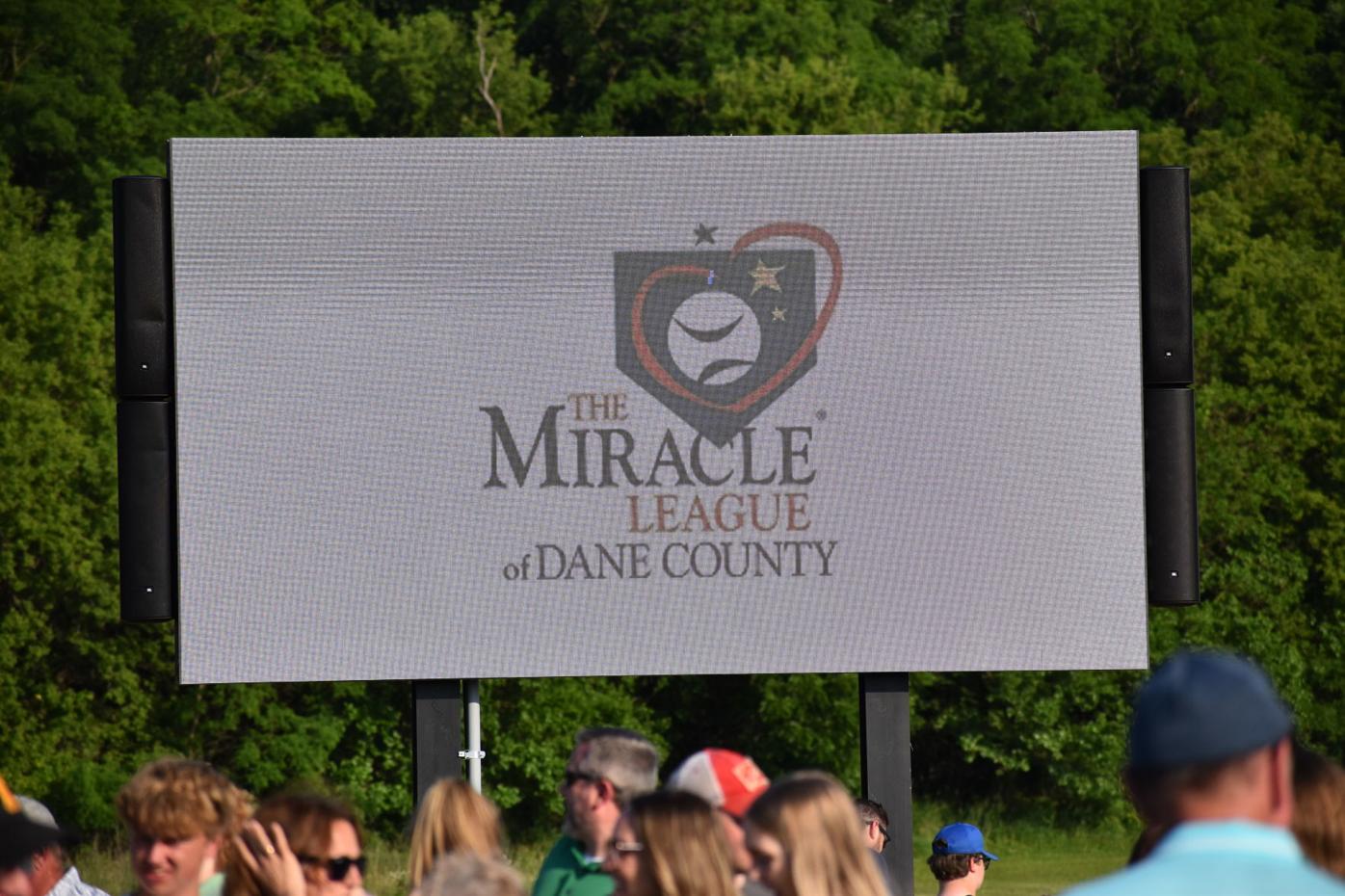 The videoboard out in center field will display the player’s name and show a picture of the player in their uniform.

The Miracle Field officially opened to the public on Wednesday, June 9. The field was designed so kids with disabilities could be able to play baseball safely.

The Miracle Field officially opened to the public on Wednesday, June 9. The field was designed so kids with disabilities could be able to play…

Thanks to a newly-constructed accessible baseball field in Cottage Grove’s Bakken Park, more kids can now participate in America’s pastime.

Known as the Miracle Field, the new baseball diamond at 220 Grove Street is designed for children with disabilities to be able to play baseball safely. The field will now be home to the Miracle League of Dane County, a baseball league for children of all abilities.

The league kicked off its first-ever season last week, celebrating with a grand opening for the park on Wednesday, June 9, which included a ceremonial first pitch and ribbon-cutting.

“I was overwhelmed with the turnout, but I was particularly overwhelmed by the great smiles on the faces of not only the kids, but the parents and the people that came from the community,” said Miracle League executive director Bill Schultz. “The smiles on the kids and parents were just heartwarming.”

Looking like a traditional little-league field, Miracle Field is made of a rubberized surface that allows for easy movement for kids to walk, run or push a wheelchair. Out in center field, a video board will display the player’s name who is up to bat, a picture of them in a uniform and their own walk-up song.

The videoboard out in center field will display the player’s name and show a picture of the player in their uniform.

“After the ribbon cutting, a lot of the kids actually wanted to go up to home plate and then go up to first base, second base while their parents pushed them,” said Schultz.

Although the parents got to push their kids from base to base during the open house, they will be watching from the stands on game day. During competitions, each player will have a buddy with them while as they bat and play in the field.

Miracle League executive director Bill Schultz gives a speech at the opening of the Miracle Field in Bakken Park. Schultz, who was denied the …

After being turned away from playing little league due to his own disabilities, Schultz was inspired after seeing a news story about the Miracle League. Miracle League is a national non-profit, with 300 leagues in five different countries.

In 2018, Schultz got the opportunity to tour Bakken Park as a potential location since it was next to a playground and splash pad. The village of Cottage Grove gave overwhelmingly positive support to bringing the field to Bakken Park, Schultz said.

“In the space of three months, we were able to get land which was remarkable and then the next phase was fundraising,” Schultz said.

Schultz used his recruiter background to tell people about the purpose of the league, and gather needed funds to launch the league.

When the COVID-19 pandemic hit, Schultz thought he would have to postpone the league until 2022, but then he received a phone call from an anonymous donor that provided a six-figure matching gift, and money for operating costs. By last November, the league had reached their campaign goal of $500,000.

“We had an incredible response from other people in the community,” said Schultz.

Construction on the diamond began in fall 2020, and was completed this spring. The Miracle Field is the first of its kind in Dane County.

Another challenge the local league faced was finding volunteers in such a short time. With each child needing two volunteers, the Miracle League of Dane County was looking for willing participants. The league has found 170 volunteers, half of which came in the last 30 to 45 days.

“We started working with high school coaches, people involved in baseball, but also people who knew these families that had kids with disabilities,” said Schultz.

The inaugural league will consist of eight teams with 12 kids on a team. Schultz expects the league to grow by 50 % by next year, which will mean more games for the kids.

“No boundary defines them. They can provide that boundary themselves,” said Schultz.