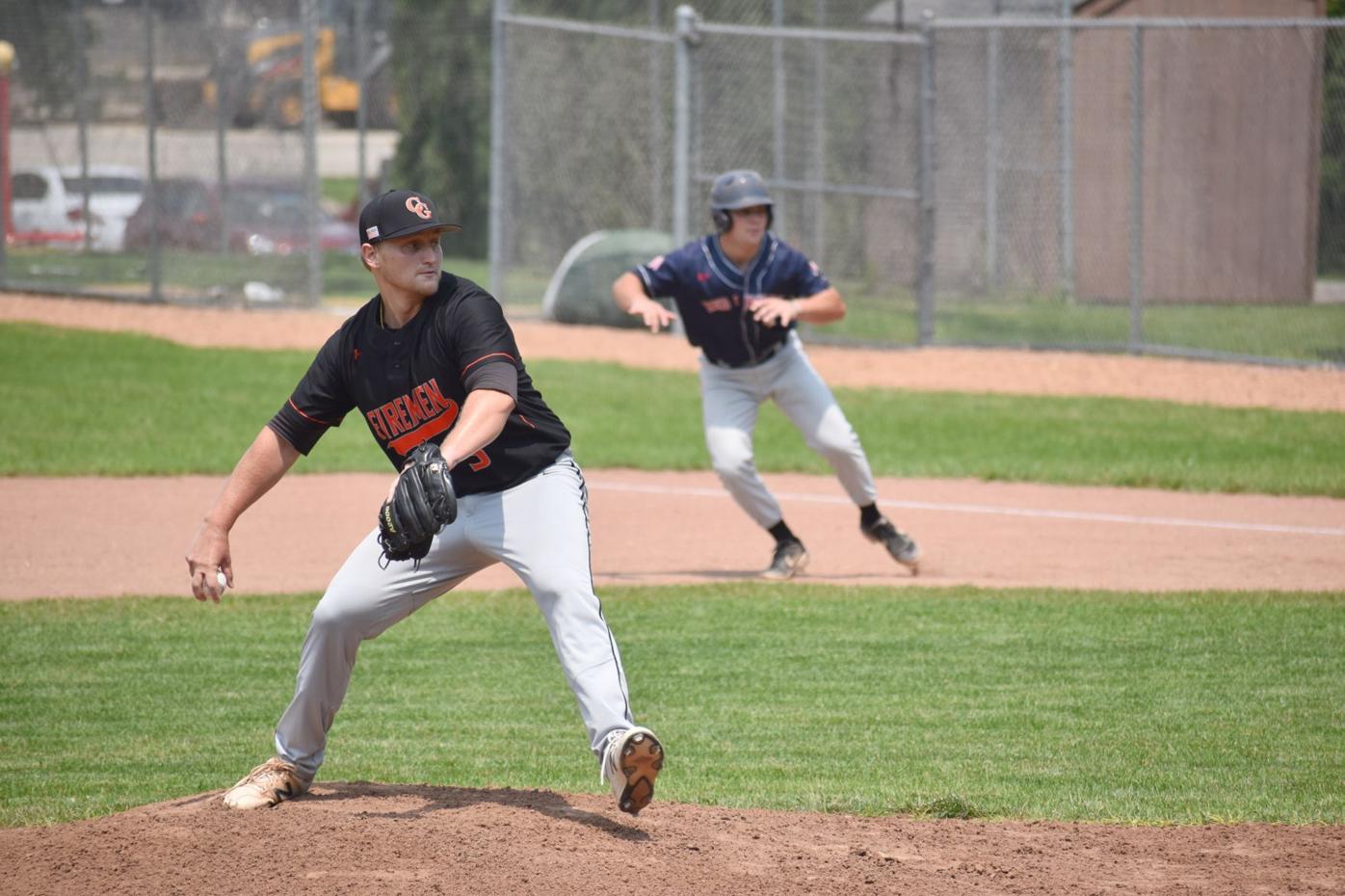 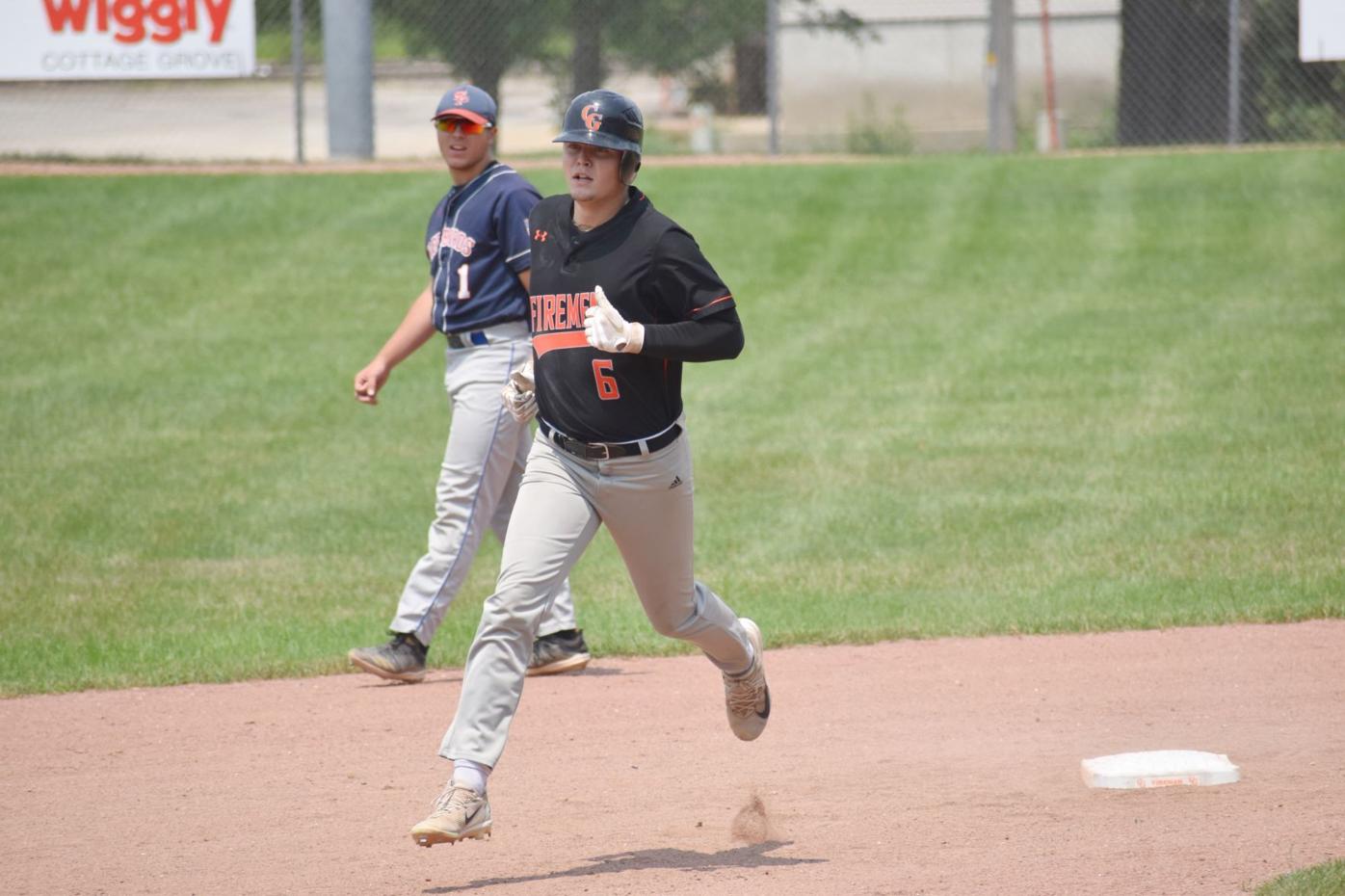 Mitch Kelsey rounds the bases after hitting a home run. Kelsey went two for five at the plate in the Cottage Grove loss.

The Cottage Grove Firemen suffered a 7-4 loss against the Sun Prairie Red Birds on Sunday, July 18.

In the bottom of the first inning, Mitch Kelsey hit a lead-off home run to give Cottage Grove a 1-0 head start.

Sun Prairie’s Spencer Bartel hit a two-run homer in the top of the third to give the Red Birds a 2-1 lead. Cottage Grove tied the game up in the bottom of the frame after Bob Blakley hit a double, driving in Jacob Cates.

In the bottom of the fourth, a Pete Strommen walk and a single by Nick Herbig put two runners on for Alan Myrold. Myrold hit a blooper down the third-base line for a double, allowing two runners to score, taking the Firemen up 4-2.

Mitch Kelsey rounds the bases after hitting a home run. Kelsey went two for five at the plate in the Cottage Grove loss.

After giving up the two-run shot early, Garret Kurtz settled in on the mound for the Firemen. Kurtz worked out of a jam in the top of the sixth after a lead-off double and a groundout put a runner on third with one out. A ground ball hit to third baseman Paul Patten allowed for an opportunity to throw out the runner trying to score at home, keeping the 4-2 lead.

“He threw the ball well today,” said Firemen manager Bob Blakley about his pitcher’s performance. “He was all around the zone, he threw a lot of strikes, he got ahead of quite a few hitters and was keeping them off balance.”

Kurtz almost got out of another jam in the seventh. On a 3-2 pitch with two outs, the Red Birds hit a two-run single to tie the game at 4-4.

Sun Prairie took the lead for good with a three-run inning in the top of the eighth. A throwing error put a runner on second with nobody out. Kelsey came on to pitch in relief, getting a groundout and a strikeout for two quick outs.

However, back-to-back walks loaded the bases for the Red Birds. Another walk brought in a run, and a two-run single gave Sun Prairie a three-run lead.

“We just got kind of lackadaisical there for a couple of innings and they’re a good team. You got to play all nine innings against these guys,” said Blakley.

Blakley pitched a one-two-three ninth inning to give the Firemen a chance in the ninth. Singles by Myrold and Kelsey put the tying run at the plate for Cottage Grove with nobody out. However, a flyout and a lineout, which turned into a double play, crushed the late-inning rally for the Firemen.

In the Eastern Section, all teams will qualify for the playoffs this year. The Firemen sit in fifth place in the standings with a record of 4-5. With a bye on July 25, the Firemen will play their last regular season game at Poynette on August 1, which could alter the seeding.

“We just gotta keep grinding,” said Blakley. “It’s been an odd year, everyone is getting back into the swing of things and it kind of seems like a long season even though it’s not. We just have to keep battling, hitting the ball and putting it in play, and hopefully things start bouncing our way.”

Blakley and Kelsey both went two for five at the plate. Strommen and Myrold added two hits on three plate appearances. Herbig, Dan Karlin-Kamin and Graham Schroeder-Gasser each had a hit in the loss.