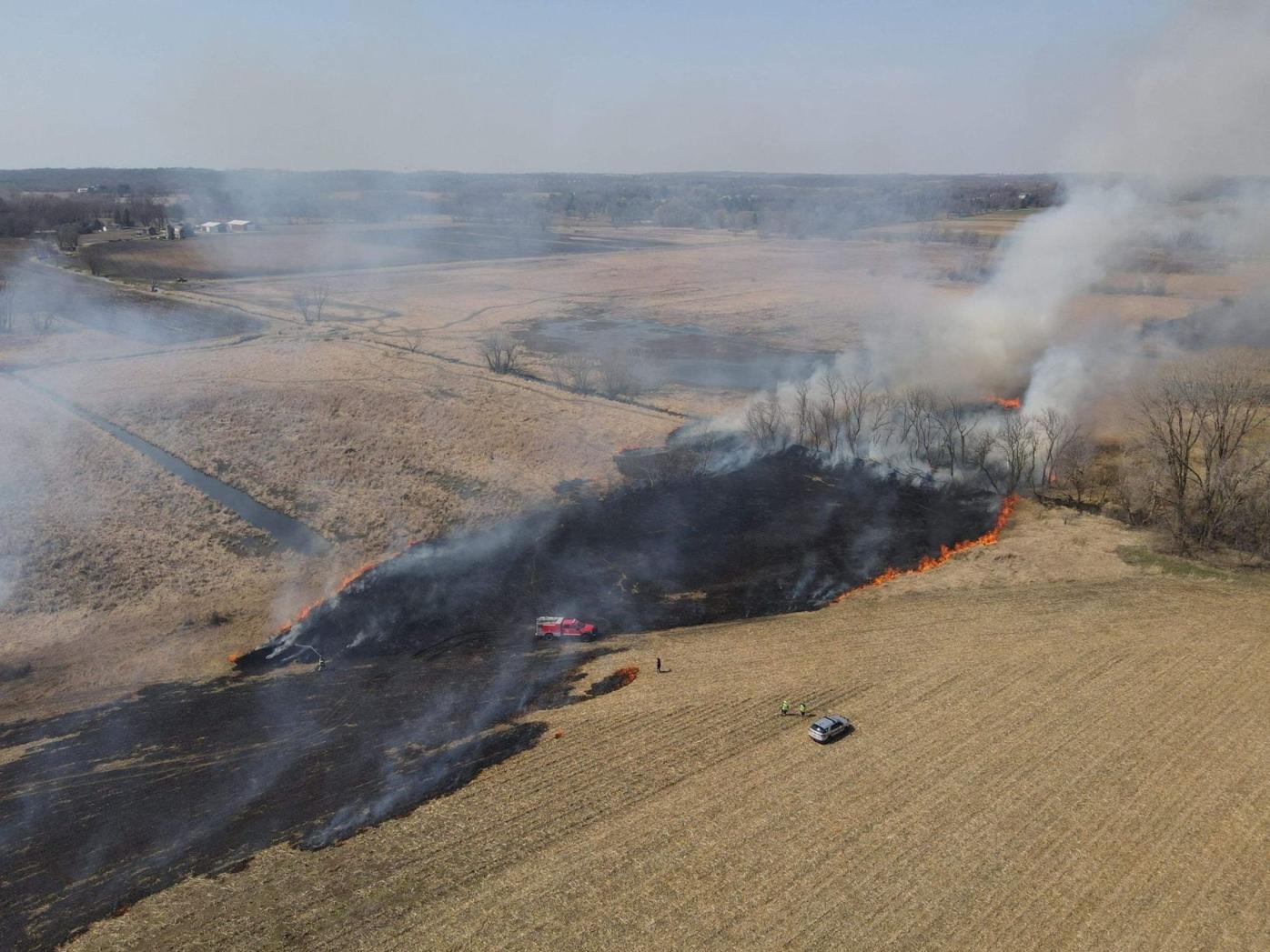 A fire burned about 45 acres of farm and marsh land on Sunday, according to the Cottage Grove Fire Department, which reported that the fire was likely caused by a tractor working in the field. 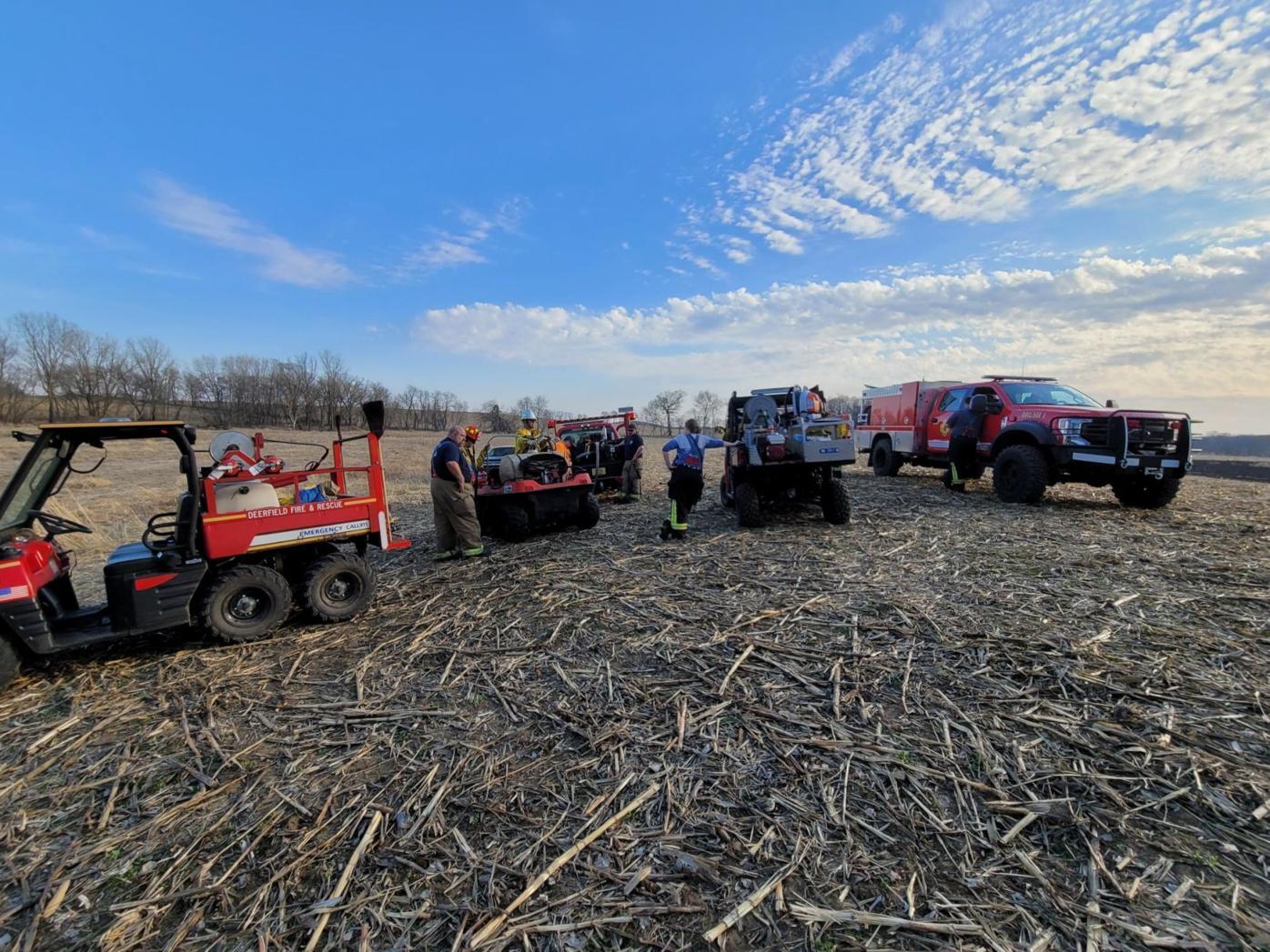 Crews from McFarland, Deerfield and Cambridge arrived to assist the Cottage Grove Fire Department with the fire.

A fire burned about 45 acres of farm and marsh land on Sunday, according to the Cottage Grove Fire Department, which reported that the fire was likely caused by a tractor working in the field.

Crews from McFarland, Deerfield and Cambridge arrived to assist the Cottage Grove Fire Department with the fire.

High winds and dry vegetation led to a fire that burned 45 acres in Cottage Grove on Sunday.

Late last week, the Wisconsin Department of Natural Resources (DNR) sent out a warning that most of the state was at a “very high fire danger” due to low humidity and high winds forecasted.

Those forecasts came true, as south-central Wisconsin hadn’t seen sustained rain for some time leading into Easter weekend, and winds picked up again on Sunday.

Shortly before 2 p.m. on Sunday, the Cottage Grove Fire Department was dispatched for reports of a farm field on fire off Coffeytown Road in the town of Cottage Grove.

Brush trucks and utility terrain vehicles (UTVs) responded from McFarland, Deerfield and Cambridge to help control the fire, which spread quickly through a large marsh area next to the farm field where the fire first began, according to the Cottage Grove Fire Department (CGFD).

“Efforts to control the fire were greatly impacted by high winds and dry vegetation, as well as muddy, marshy terrain and numerous irrigation canals that made it difficult to access multiple head fire,” the CGFD said in a news release.

Firefighters were able to knock down the fire by 4:40 p.m., meaning the main body of the fire had been suppressed. After that, firefighters spent another two hours looking for other particularly active spots of the fire.

According to the CGFD, the likely origin of the fire was a farm tractor working in the fields. No structures were affected and no injuries were reported.

On Saturday, The town of Cottage Grove suspended all burning permits, and the CGFD canceled a previously scheduled controlled burn.

Last week, the DNR asked residents to avoid all outdoor burning, be careful with offroad vehicles and equipment, and to make sure to extinguish and dispose of cigarettes properly. On Monday, Gov. Tony Evers declared a state of emergency due to elevated wildfire conditions, which “will assist the state in rapidly mobilizing the Army National Guard’s Blackhawk helicopters to the areas of the state in most need of aerial fire suppression resources during the critical spring fire season,” a release from Evers’ office said.

As of Friday, there had already been 320 wildfires reported in Wisconsin so far this year, burning over 1,400 acres, according to Evers. DNR officials are anticipating a longer fire season than normal due to how early this year’s snow melt was.