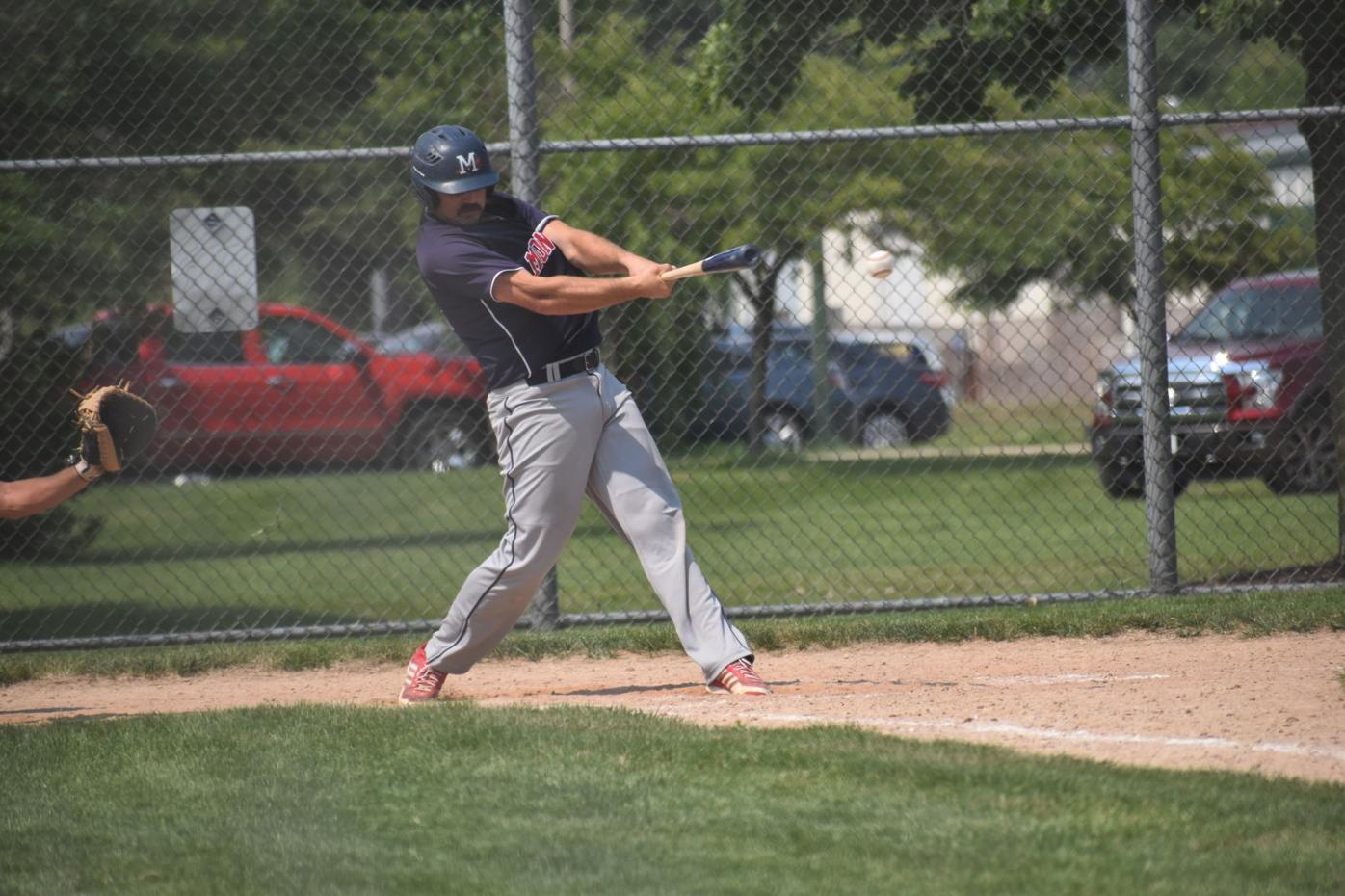 Vince Schmitz hits a single in Monona’s 15-9 victory over Cottage Grove on Sunday, July 4. Schmitz went three for six with three RBIs in the win. 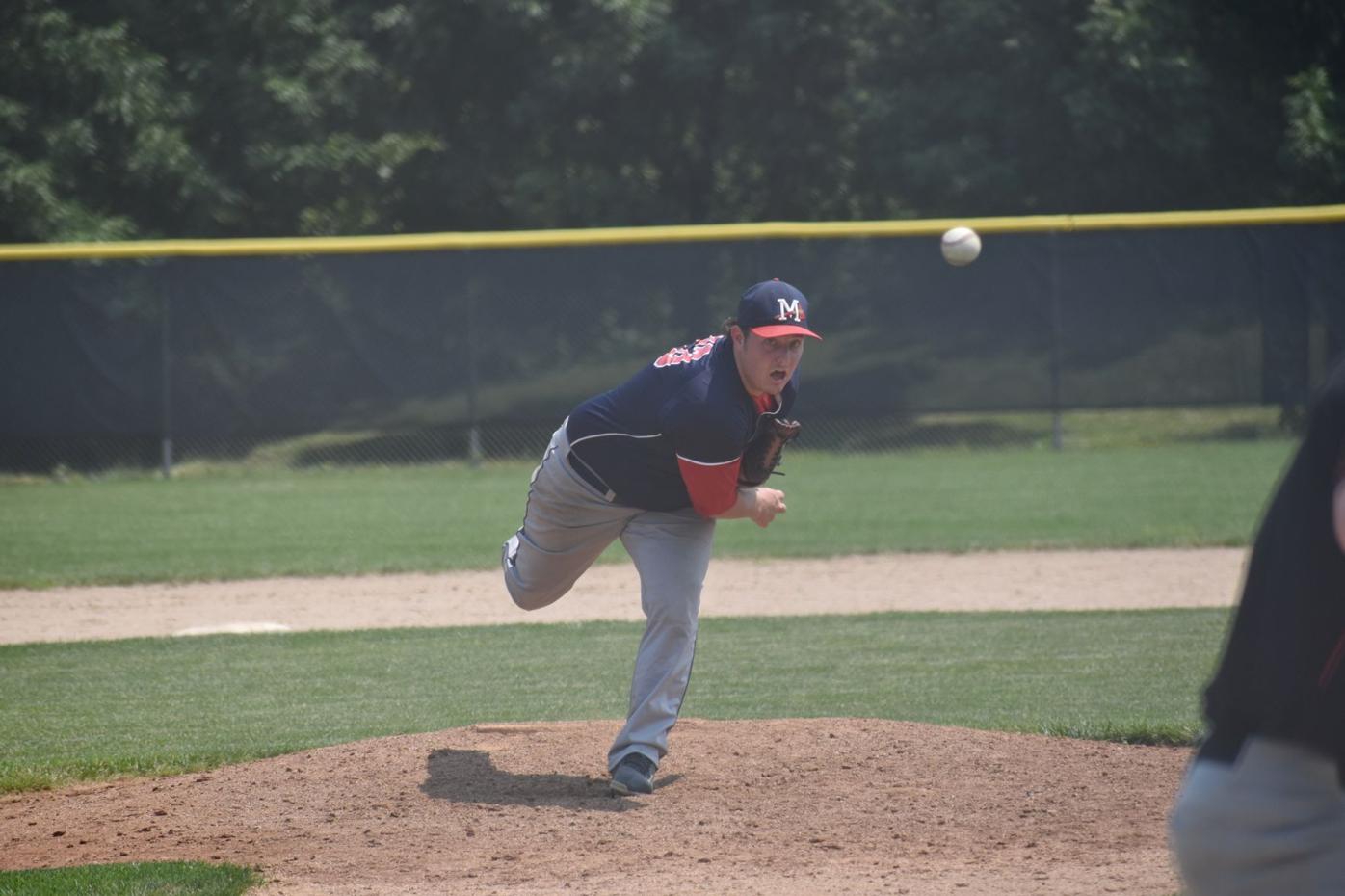 Spectators at Murphy-Anthony Field in Monona were treated to an early fireworks show on Sunday, July 4, as the Monona Braves were victorious over the Cottage Grove Firemen 15-9.

The Monona offense quickly got on the board in the bottom of the first inning after a Kian O’Brien double drove in Taylor Carlson, who led off the game with a double.

In the top of the second, Cottage Grove scored six runs to take a 6-1 lead.

“On a hot day like today, we came out a little sluggish,” said Braves manager Vince Schmitz. “We got rid of the bat rack in our dugout, we’re not really a bat rack type of team so it woke the bats up.”

Monona responded in the bottom of the second with four runs. A RBI groundout by Shawn Held, a two-run homer by Carlson and an RBI double by Schmitz brought Monona closer to the 6-5 lead.

In the bottom of the fourth, Carlson reached first on a walk and stole second. An infield single by O’Brien moved runners to first and third with two out. Schmitz hit a double off the wall to drive in the pair, and Beau Goff drove in Schmitz with a single, giving Monona an 8-6 lead.

After back-to-back singles by Casey Seelow and Danny Sullivan, who then advanced to second and third base after a wild pitch, Carlson drove in a run on an infield single. O’Brien smacked a double to drive in another run, making the score 10-6 for Monona in the fifth.

The Monona lead would not be relinquished with Andy Swanson pitching in relief. The right hander relieved starting pitcher Corey Schmidt in the second, only giving up one run in more than five innings of work. Swanson struck out four, while only allowing two hits.

In the top of the seventh, Cottage Grove cut into the Monona lead with a run. However, Monona responded back with a run of its own in the bottom of the frame. After Carlson hit a two-out double, O’Brien drove him in with a single that extended the lead to 11-7.

The Braves got another big rally going in the eighth to open the floodgates. Walks by Jordan Carlson, who was lifted for Cameron Lucey, and by Jonathan Switalla put runners on second and first base for Dan Stefansky. Stefansky’s RBI single drove in a run.

A single by Held loaded the bases for Carlson, who hit a two-run double. Held then scored on a wild pitch to extend the lead to 15-7.

“Shoutout to Taylor, he had a big day at the plate,” said Schmitz. “He can’t get out, so it definitely got us going, got us fired up and it was a good win. We’re excited about it.”

Goff closed out the game on the mound, giving up two runs in two innings of work. A lineout ended the game, giving Monona the 15-9 victory.

The top of the Monona batting order did the damage against Cottage Grove. Carlson, O’Brien and Schmitz went a combined 12 for 17 with 11 RBIs.

The win brings Monona’s record to 6-1 on the year and puts the Braves in first place for the Eastern Section standings.