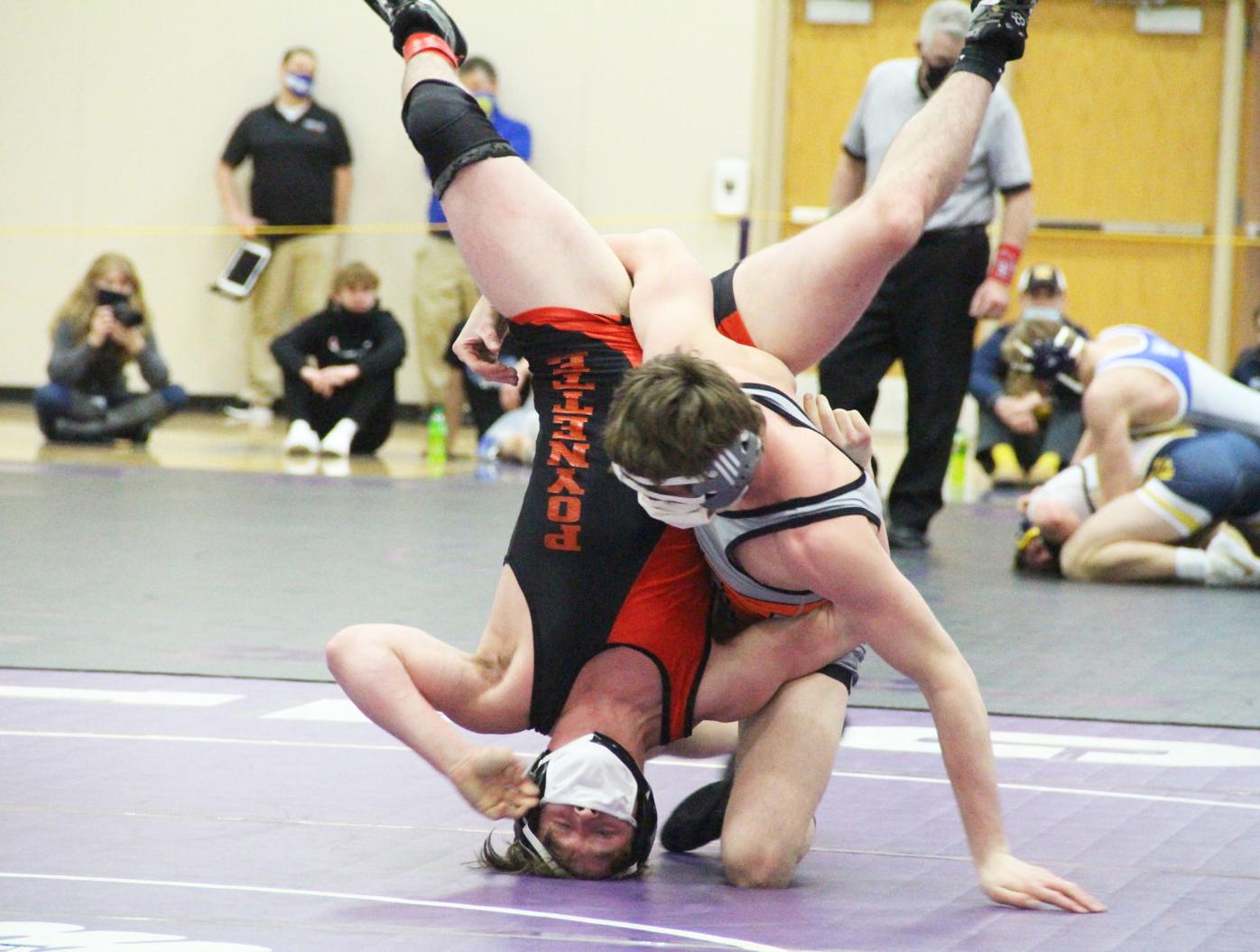 Poynette’s Gunnar Hamre balances on his head as he scrambles for a takedown against Cedar Grove-Belgium’s Cael Erickson in their championship match on Saturday. 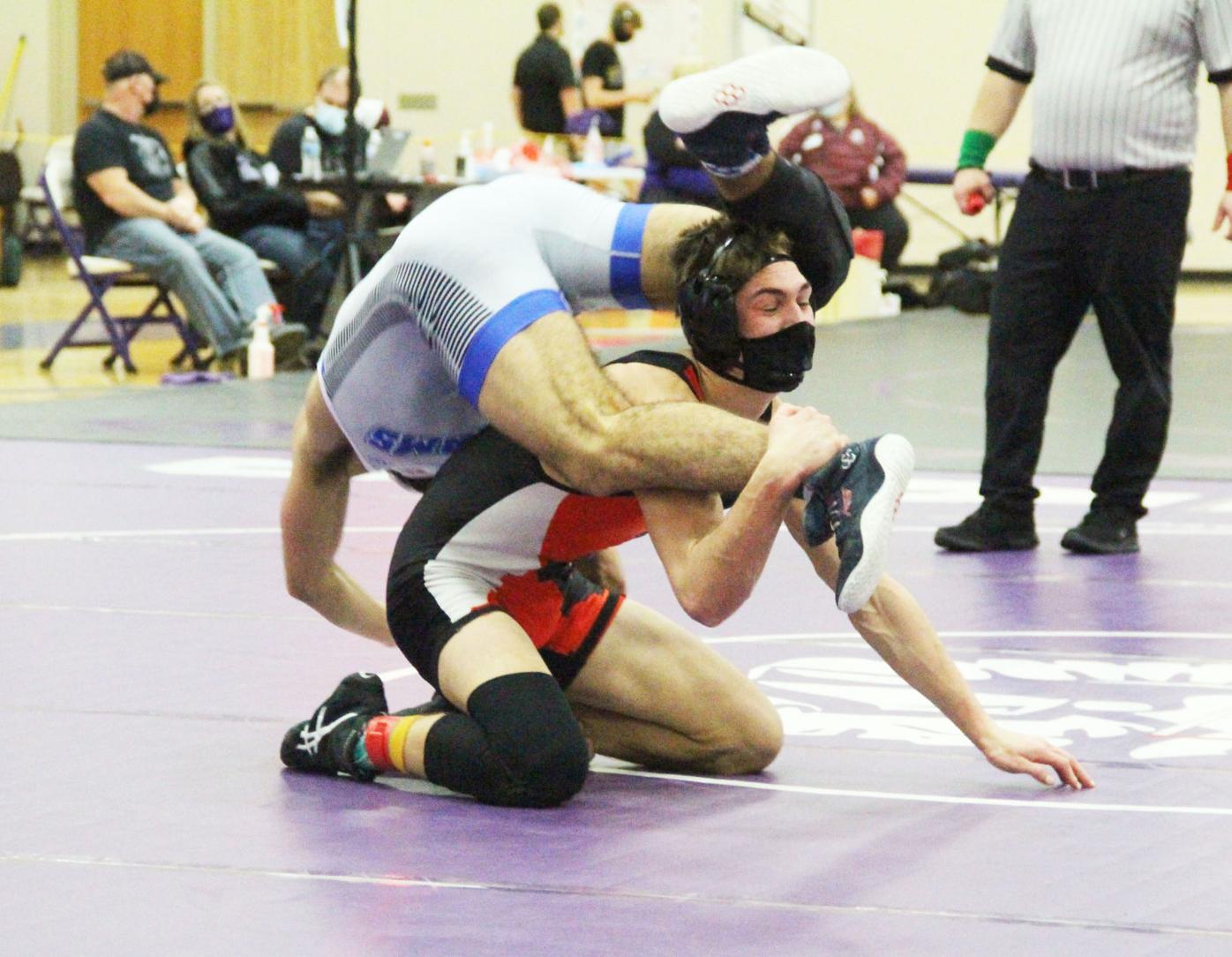 Poynette 138-pounder Cash Stewart works for a takedown in the championship match at last Saturday’s sectional. 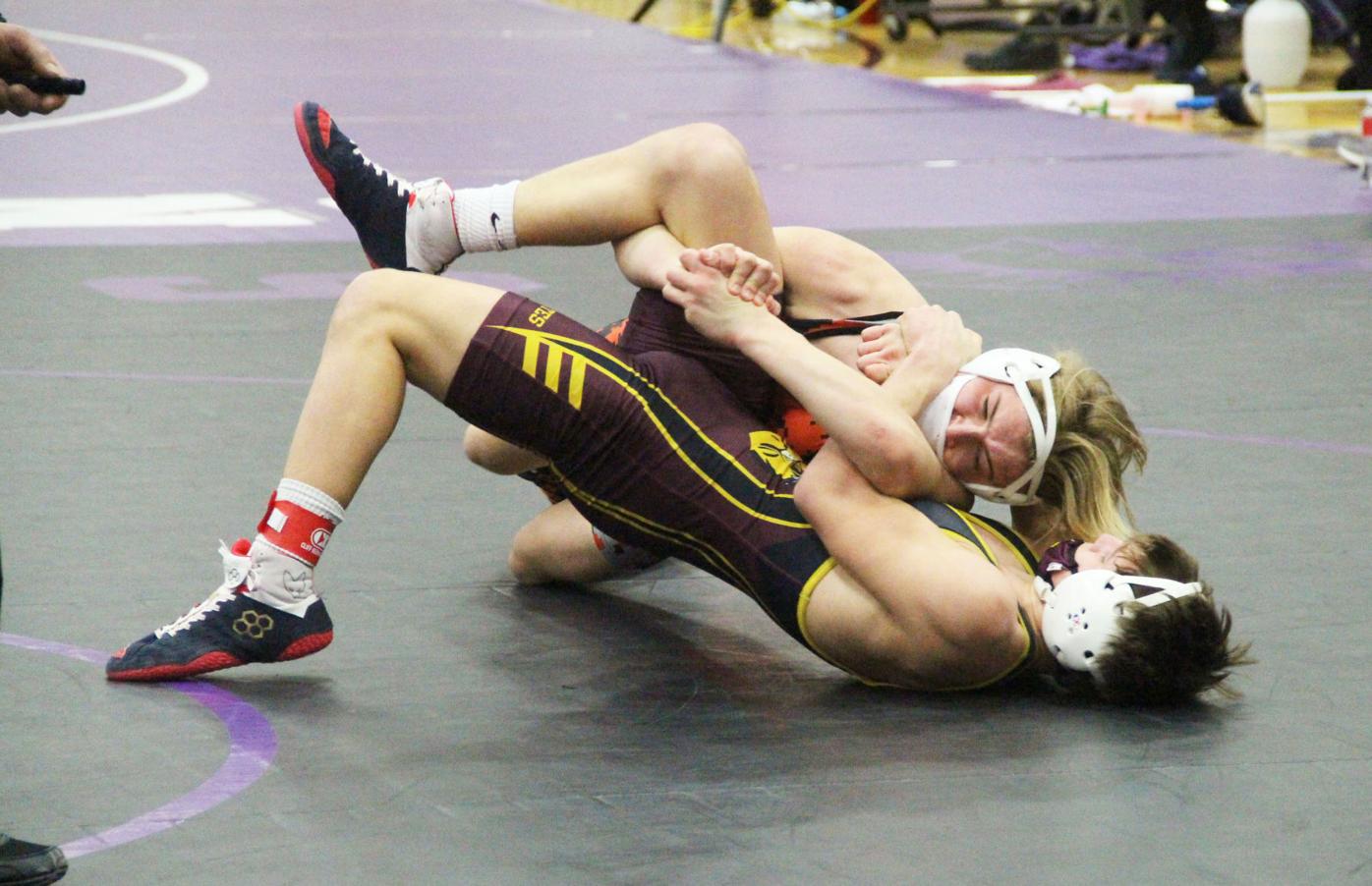 Poynette's James Amacher (top) tries to put Waterloo's Trevor Firari on his back during a second-place wrestleback.

Poynette’s Gunnar Hamre balances on his head as he scrambles for a takedown against Cedar Grove-Belgium’s Cael Erickson in their championship match on Saturday.

Poynette 138-pounder Cash Stewart works for a takedown in the championship match at last Saturday’s sectional.

Poynette's James Amacher (top) tries to put Waterloo's Trevor Firari on his back during a second-place wrestleback.

In a normal year, last Saturday’s WIAA Division 3 Dodgeland Wrestling Sectional would have been packed with fans and the atmosphere would have been electric. But because of the ongoing COVID-19 pandemic, tournament managers did not allow fans to attend.

With no fans to feed off of, athletes had to generate their own spark on the mat.

“It was different atmosphere without the crowd,” Poynette 138-pounder Cash Stewart said. “You can feel the difference. It forced you to be strong mentally and push yourself.”

Stewart, a defending state champion, was one of two Poynette wrestlers to advance to the state tournament. He will be joined again this year by 145-pounder Gunnar Hamre.

“The state title puts a target on my back, but that just pushes me to work harder,” Stewart said. “I like it because I get the best out of everybody, which pushes me to be my best.”

The Pumas finished the day with 68 points to place seventh overall.

“It was a day of mixed emotions, like it is every year at sectionals,” Poynette coach Nate Leu said. “The kids push for this moment all season, so to see some of them come up short is heartbreaking. For the guys who did make it is great to see that the hard work paid off. I’m pretty proud of how they all wrestled.”

Stewart, a junior, advanced to state for the third time in his career. He placed fourth in the state at 113 as a freshman and then claimed the crown at 120 last season.

Stewart claimed the sectional title after three impressive wins on Saturday. He opened the day by pinning Westfield’s Hayden Hockerman in 39 seconds in the quarterfinals and followed it up with a 9-5 victory over Kenosha Christian Life’s Javis Pinter in the semifinals.

In the finals, Stewart scored a 7-2 victory over Random Lake’s Parker Scholler.

“I felt good to be back at sectionals during this weird year,” Stewart said. “It was nice to be able to wrestle. I went out and gave it my all, but there is still room for improvement. I could wrestle cleaner.”

Stewart, who is 7-0 this season, will face Reedsville’s Blake Delsman (10-1) in the first round at state.

“It is not going to be an easy ride, but it should be a fun journey,” Stewart said.

Hamre is headed back to state after placing second last Saturday. He placed fourth at 138 at last year’s state tournament.

Hamre opened the tournament with back-to-back pins. He struck Random Lake’s Hayden Scholler in 4:43 in the opening round and then pinned Markesan’s Caleb Stoll in in 1:47 in the semifinals.

In the championship match, Hamre suffered his first loss of the season after falling 15-7 to Cedar Grove-Belgium’s Cael Erickson.

“We knew that Erickson would be a tough opponent in the finals,” Leu said. “Hopefully, Gunnar will get another shot at him at state.”

Hamre will take a 13-1 record into his state opening match against Stratford’s Elijah Lucio (16-2).

Puma 152-pounder James Amacher was also looking to get back state, but fell just short after placing third.

“It’s tough for James because in a normal year, he would be headed to state after placing third,” Leu said. “But we knew what the deal was when we got here. There are a lot of really good wrestlers who did not make it out of this sectional.”

Amacher had to battle back after falling 10-9 to eventual sectional champion Korben Brown of Parkview in the first round. He bounced back by pinning Princeton’s Collin Schueler (3:30) and Winnebago Lutheran’s Josh Roloff (3:06) to earn a spot in the third-place match.

Amacher scored a thrilling 4-2 overtime victory over Random Lake’s Toren Vandenbush to get a chance at a second-place wrestleback. Unfortunately, he was pinned in 1:53 by Waterloo’s Trevor Firari in the wrestleback.

Amacher finished the season with a 13-4 record.

Poynette 160-pounder Owen Bahr came away with fifth place on Saturday. He won by medical forfeit over Deerfield’s Ray Bach in the fifth-place match.

“I’m really proud of Owen,” Leu said. “He has progressed a lot over the last two years. He became more confident.”

Isaiah Gauer (8-4) was the only other Puma to compete at the sectional. The 113-pounder held a lead in both of his matches, but was pinned in both.

“That was tough for Isaiah,” Leu said. “We have been ecstatic how he has progressed as a second-year wrestler. He has a lot to build on.”

Because of restrictions, the WIAA Division 3 state tournament has been moved from the Kohl Center in Madison to Wausau West High School. The first round will start at 9 a.m. on Saturday.