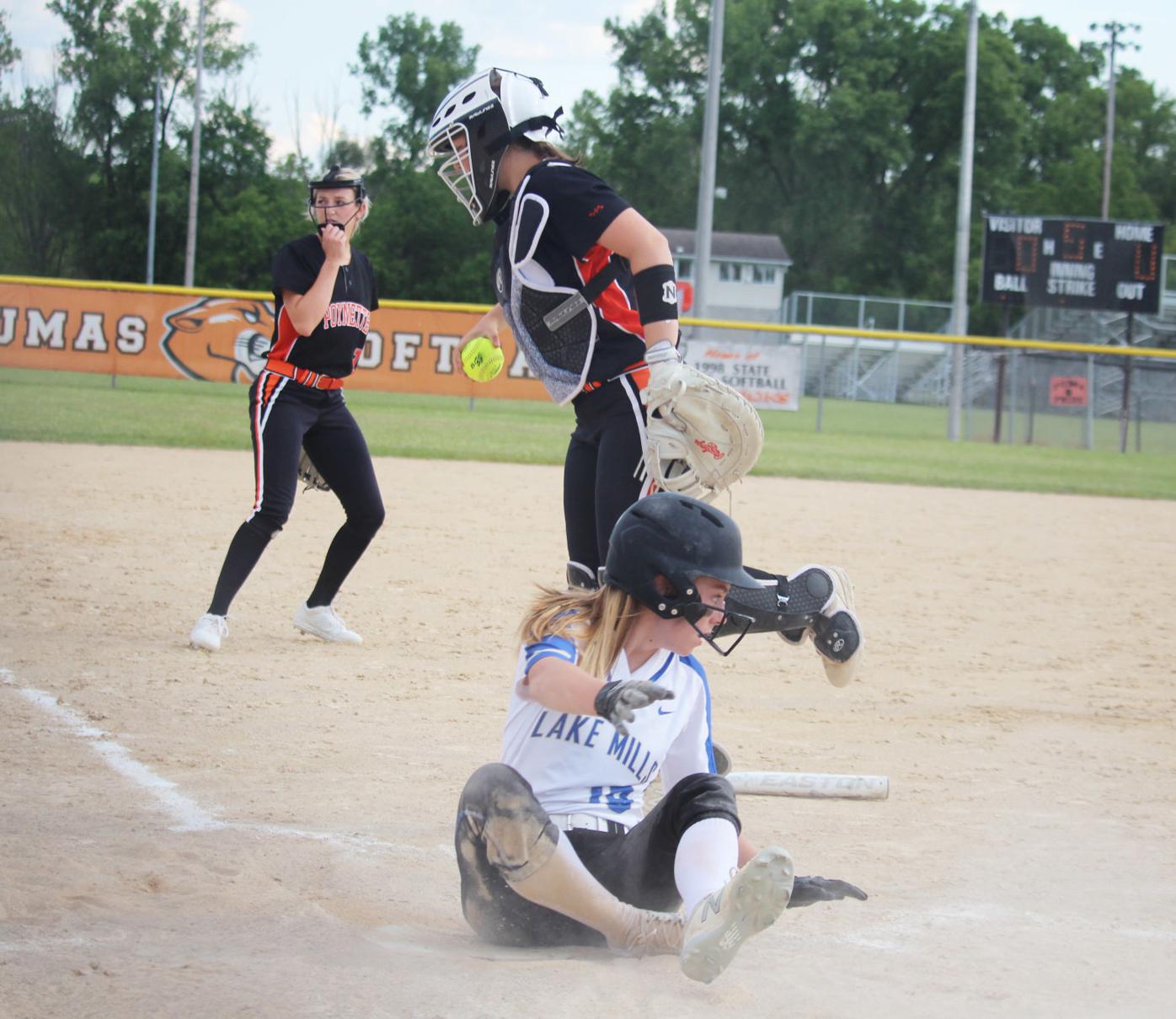 Poynette catcher Laken Wagner tries to keep her balance after getting a force out at the plate against Lake Mills. 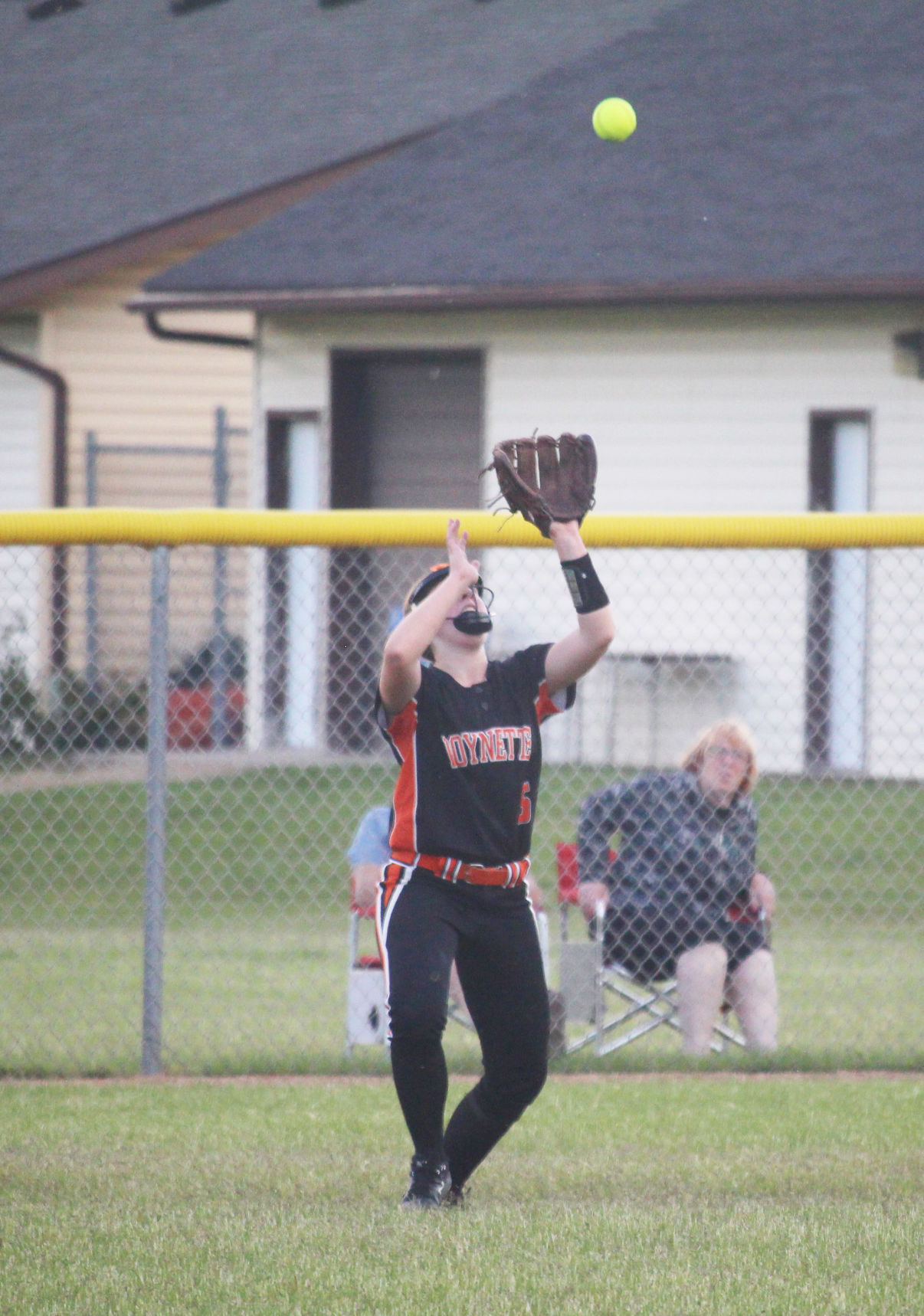 Puma outfielder Abby Klink camps out under a ball against Lake Mills. 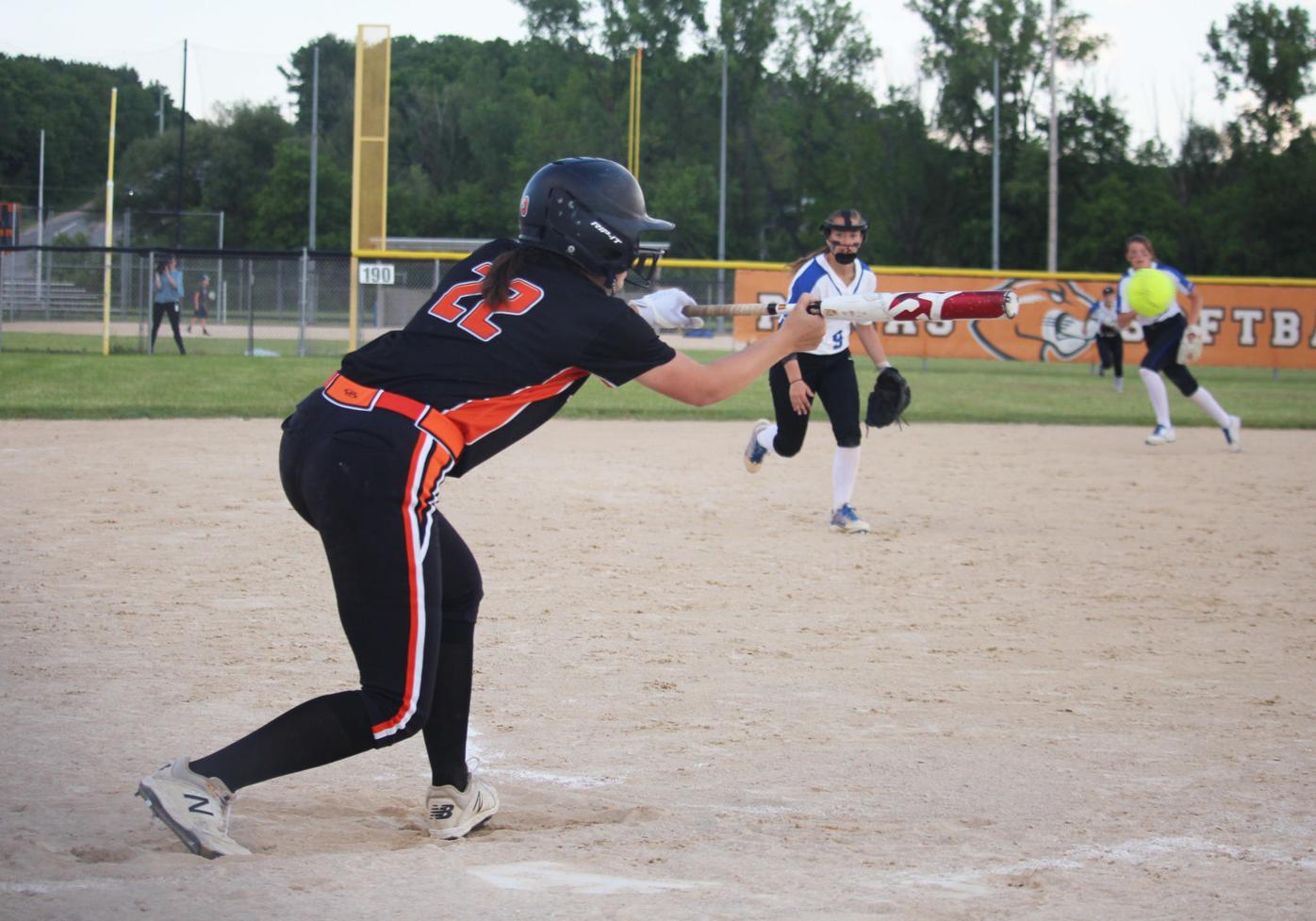 Poynette catcher Laken Wagner tries to keep her balance after getting a force out at the plate against Lake Mills.

Puma outfielder Abby Klink camps out under a ball against Lake Mills.

The top-ranked Pumas had their title hopes dashed after a heartbreaking 1-0 extra-inning loss to at home to second-ranked Lake Mills on June 1.

Poynette bounced back from the loss to get revenge on Columbus, which ended the Pumas 61-game win streak earlier this season. The Pumas edged the host Cardinals 2-1 in eight innings on June 3.

The Pumas still have a chance at winning their third straight WIAA Division 3 state title.They are the No. 2 seed in the regional and will host the winner of the first round game between seventh-seeded Marshall and 10th-seeded Watertown Luther Prep on June 14.

For the second time this season the Pumas and L-Cats locked horns in a defensive battle. Poynette won the first meeting 1-0 on May 6.

The L-Cats snapped the Pumas’ eight-game win streak after scoring a run in the top of the eighth to break a scoreless tie. Ellie Evenson led off the inning with a triple and scored one batter later on a single by Taylor Roughen.

Poynette had just three base runners through the first five innings of the game. They had two on in the sixth, but failed to score.

The Pumas’ Abby Klink nearly ended the game in the bottom of the seventh after hitting shot off the top of the fence in left field for a double. Poynette was unable to knock her in.

Poynette went in order in the bottom of the eighth.

Klink had three of the Pumas’ four hits in the game. Ashia Meister had the only other hit.

Holly Lowenberg held Lake Mills to one run on eight hits but it was not enough. She had 11 strikeouts and didn’t walk a batter.

Lowenberg had another great pitching performance against Columbus. She scattered six hits over eight innings and collected 11 strikeouts.

The game was scoreless until the Pumas scored a pair of runs in the top of the eighth inning. Both runs scored on a single by Brooke Steinhorst.

Columbus made things interesting in the bottom of the eighth. They scored a run, but Meister threw out the tying run at the plate to end the game.

Lowenberg also got the job done at the plate. She had four of the Pumas’ four hits.

The Pumas were never able to get their offense going against Cedarburg, which is ranked sixth in Division 1. Poynette had just three hits.

The game was scoreless until Cedarburg scored three runs in the top of the sixth. The Bulldogs added an insurance run in the seventh.

Steinhorst finished with two hits, while Peyton Gest had the only other hit for Poynette.

Steinhorst and Lowenberg split pitching duties and combined for nine strikeouts and a walk. Lowenberg took the loss.

Poynette out-hit the Bulldogs 6-3 but it was not enough to avoid the sweep.

Poynette led most of the game after Steinhorst drove in a run in the bottom of the first inning.

The lead lasted until Cedarburg scored two runs in the top of the sixth.