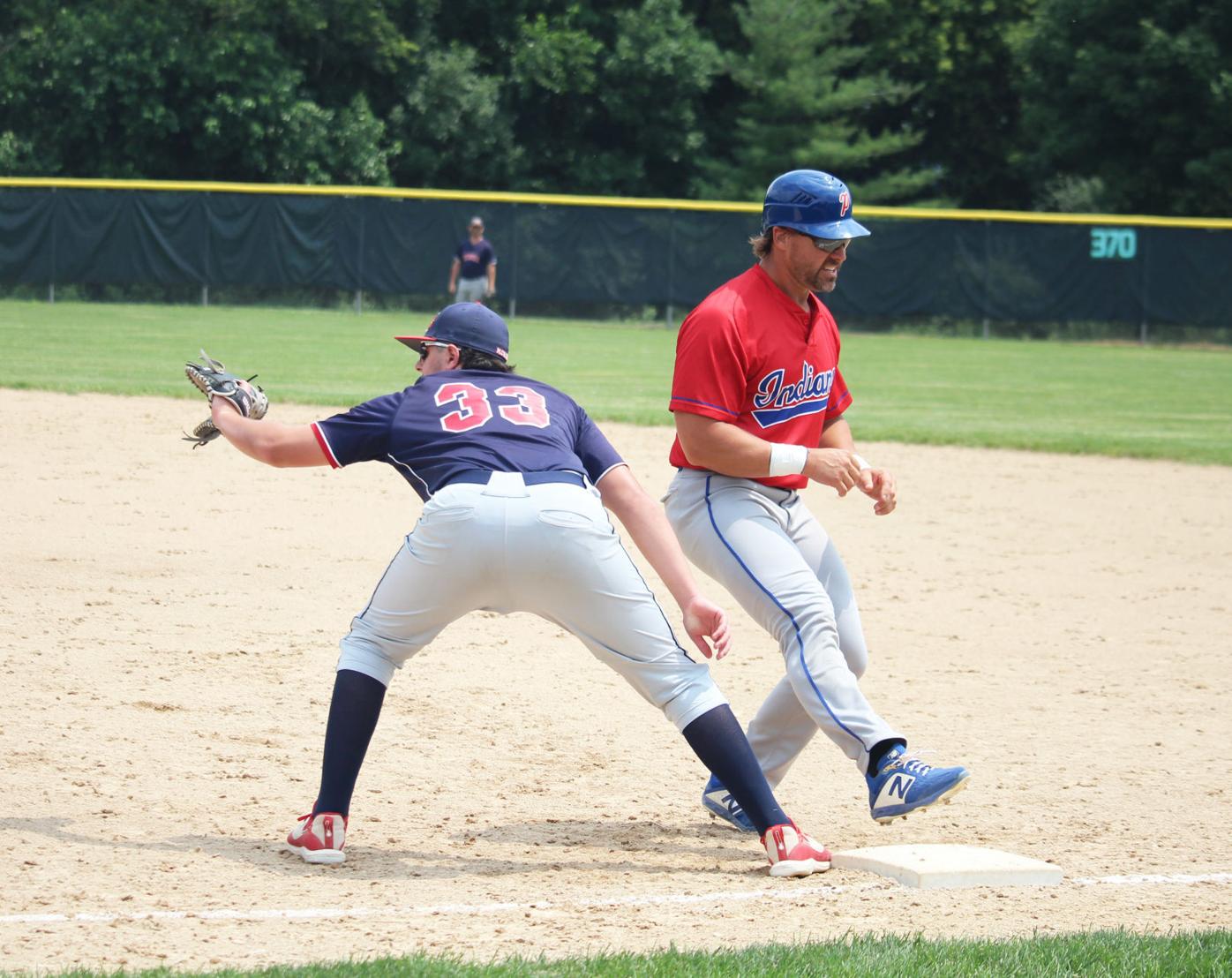 Poynette’s Kory Ryan quickly gets back to first base on a pickoff attempt against Monona. 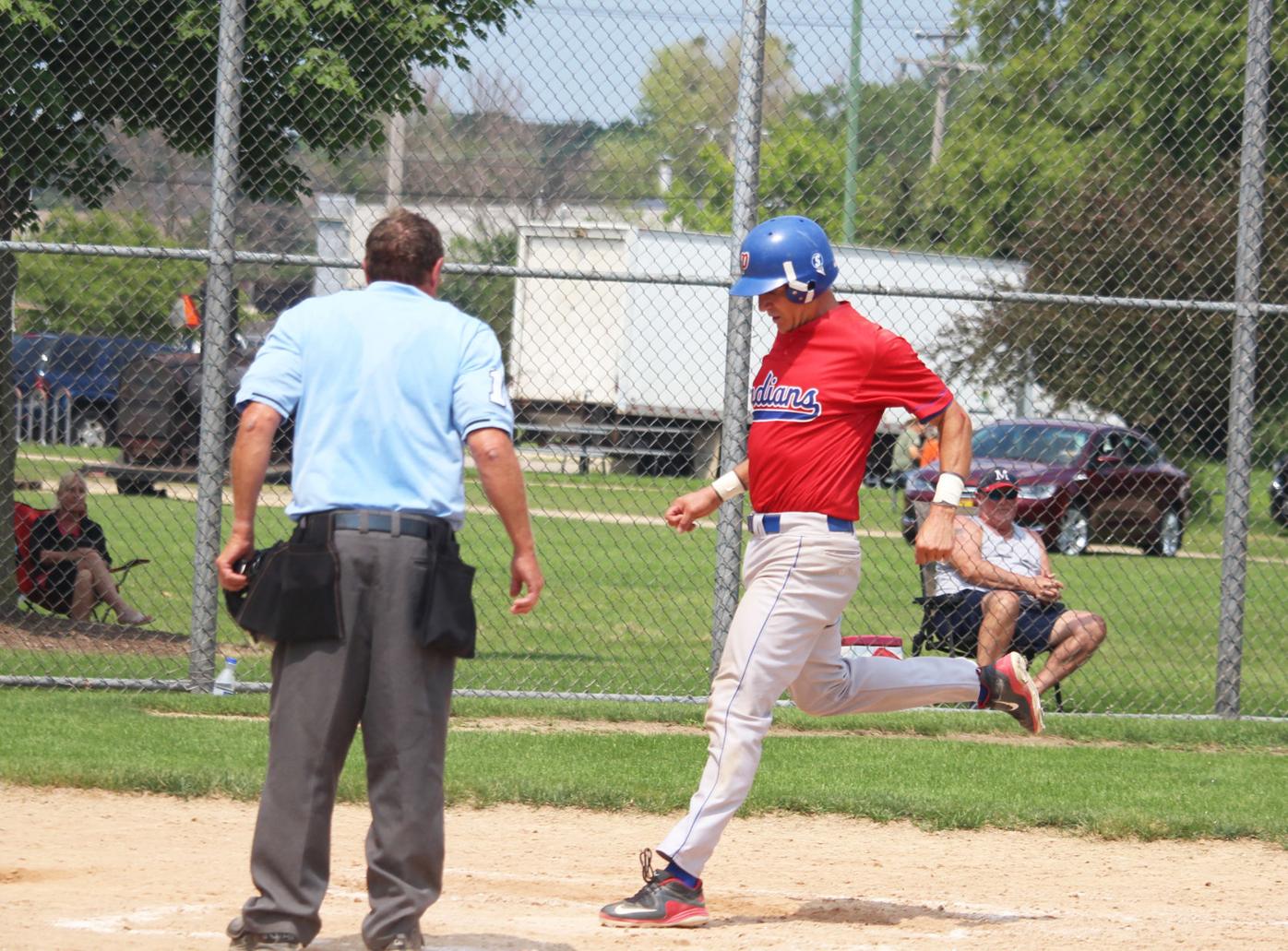 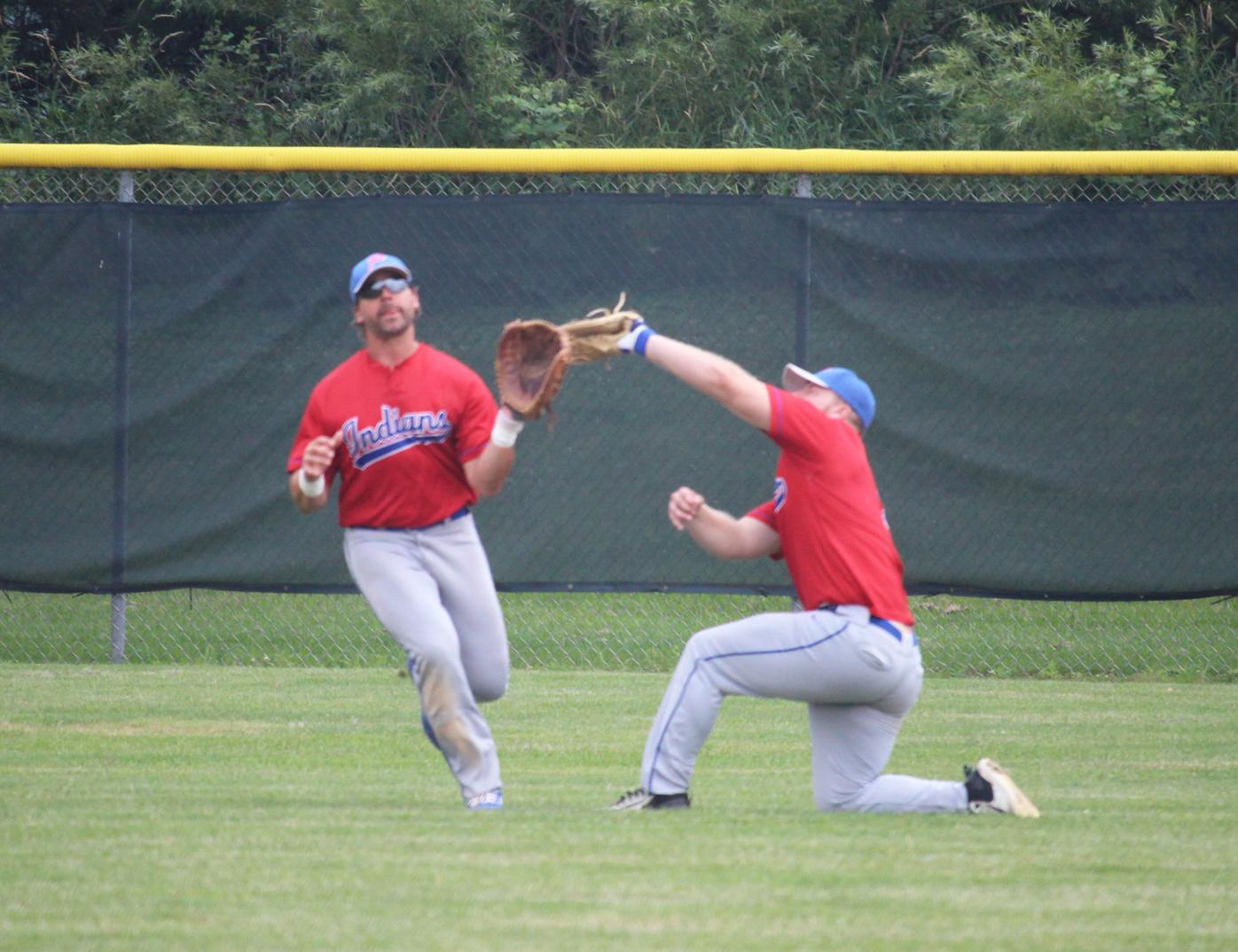 The Indians’ Ian Nowell dives in front of teammate Kory Ryan to catch a ball during Sunday’s win over Monona.

Poynette’s Kory Ryan quickly gets back to first base on a pickoff attempt against Monona.

The Indians’ Ian Nowell dives in front of teammate Kory Ryan to catch a ball during Sunday’s win over Monona.

The Poynette Indians baseball team took a big step toward earning a Home Talent Eastern Section playoff spot after knocking off section-leading Monona 9-3 this past Saturday.

But, the Indians were unable to carry the momentum over into their game with host Montello on Sunday. Poynette came up short in a late rally attempt and fell 11-9.

“Unfortunately, we just weren’t solid defensively today,” Poynette player/manager Davy Tomlinson said. “We gave them way too many baserunners and it hurt us. Even though we had 15 hits and 9 runs, we still left a lot on base. I am proud of how they guys just never give up in any situation. There’s a lot of teams that would just fold up after being down 8-0 in the third inning. Not us, our guys fight all the way through.”

Poynette (11-9 overall) is still in good position to earn one of the four playoff spots. They are 5-4 in the Eastern Section.

Poynette does not have an Eastern Section game this week and will close out the regular season at home against Cottage Grove at 1 p.m. on Aug. 1.

The Indians will resume Night League play on July 22. They will play in Columbus at 7:30 p.m.

Poynette fell behind 3-0 to the host Braves, but scored nine unanswered runs to earn the win.

“We kept fighting and having good at-bats and were able to get to their bullpen,” Poynette outfielder Kory Ryan said. “Once we did that, we did some damage.”

Monona grabbed momentum early with runs in the bottom of the first, third and fourth innings.

The Indians started their comeback with a run on a bases-loaded walk by Kyle Bestul in the top of the sixth inning.

Poynette tied the game after scoring a pair of runs in the top of the seventh. Alex O’Connor and Davy Tomlinson both scored on a double by Ryan.

The Indians left the bases loaded in the seventh and eighth frames.

Poynette completed the comeback with a six-run outburst in the top of the ninth.

O’Connor was hit by a pitch for the first run in the ninth, while Tomlinson followed with a bases-loaded walk.

Ryan had his third double of the game in the ninth to plate three more runs, while Aaron Krigbaum added a run-scoring single.

Bestul pitched all nine innings for Poynette. He had four strikeouts and six walks in the win.

“Kyle was a bulldog,” Tomlinson said. “He battled well against a very good hitting Monona team.”

Not much went right for the Indians early on against Montello.

Montello scored two runs in the first and second innings and increased the lead to 8-0 with four more in the third.

Poynette cut the deficit in half with four runs in the top of the fifth inning. Tomlinson knocked in the first run with a single, while Ryan followed with a three-run home run.

Montello scored a run in the bottom of the sixth, but the Indians got it back in the top of the seventh on a run-scoring single by Krigbaum.

Montello went up 11-5 with a two-run home run in the bottom of the eighth.

Poynette did not go away quietly in the ninth. The Indians scored four runs and had the tying run at the plate when the game ended.

“It was a heck of a comeback by the guys,” Nowell said. “WE dug an early hoe, but battled back the whole way.”

Ryan Hutchinson knocked in the first run in the ninth with a single, while Riley Radewan plate a run with a ground ball. Nowell then smacked a two-run home run.

Nowell went 4-for-5 to lead the Indians at the plate. Steve Leiterman came away with three hits, while Hausser and Krigbaum added two each.

Kelby Petersen and O’Connor both pitched for the Indians and combined for a strikeout and six walks. Petersen took the loss.