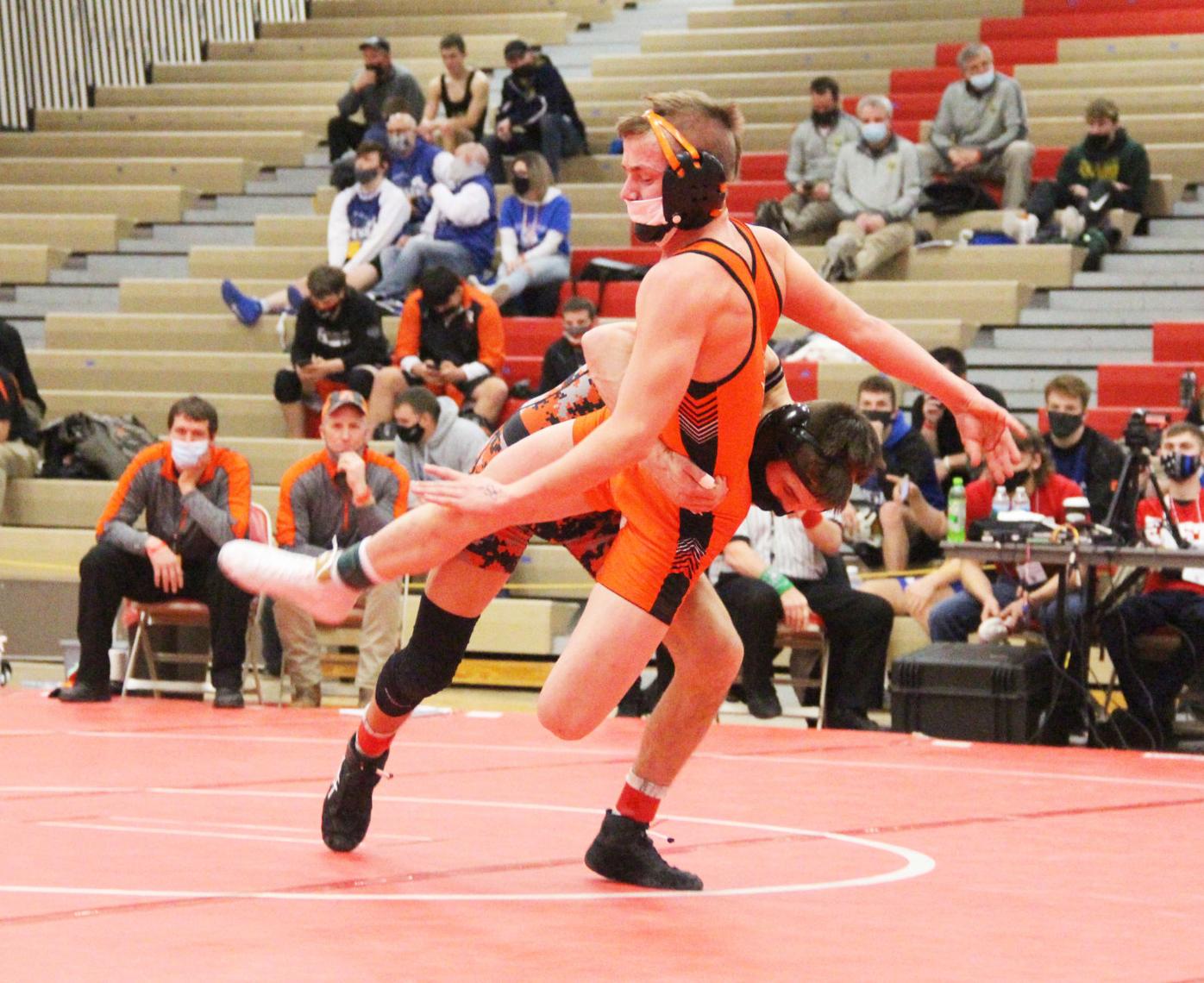 Poynette 138-pounder Cash Stewart score a takeown during the first round of the state tournament on Saturday. 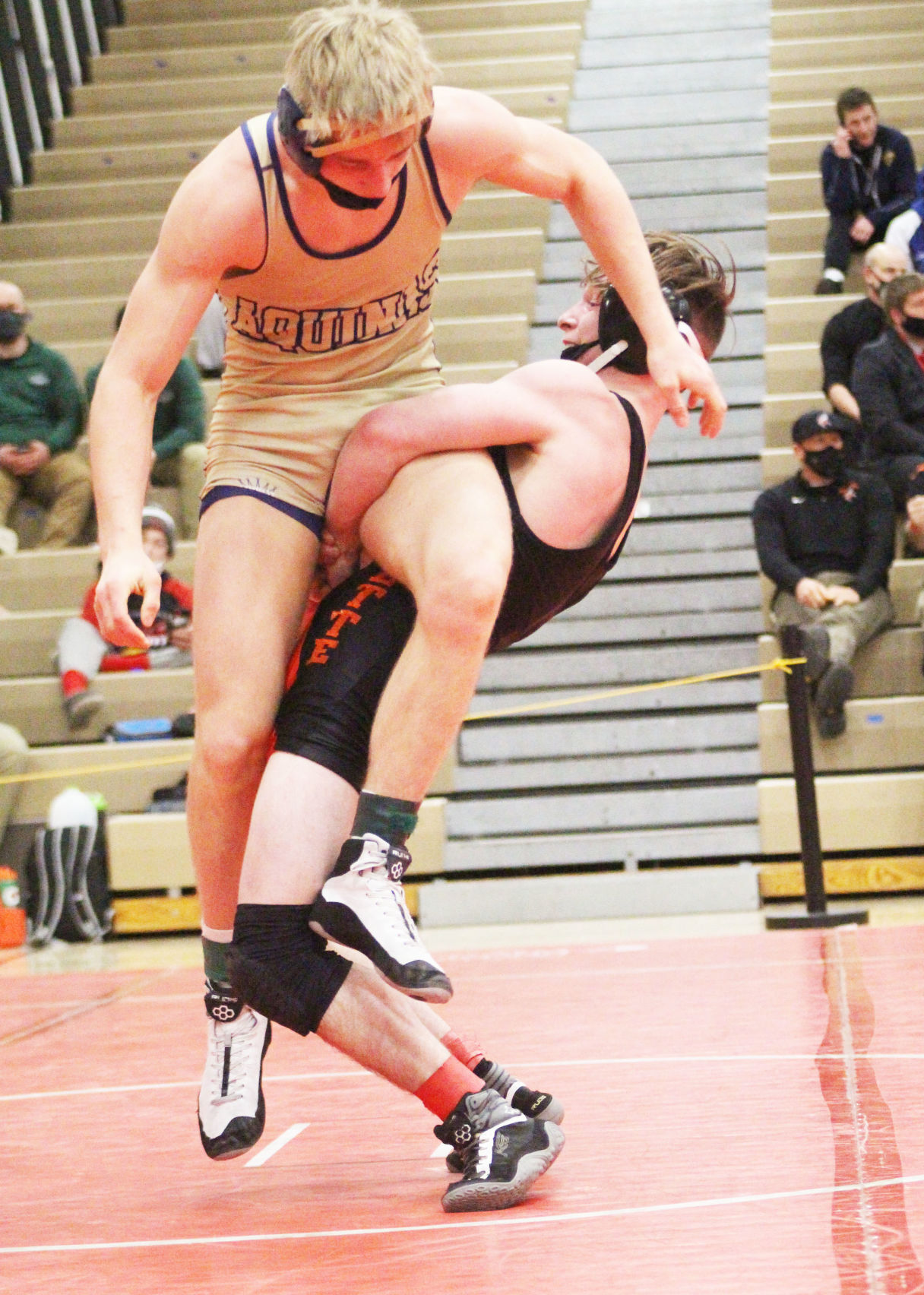 Poynette 138-pounder Cash Stewart score a takeown during the first round of the state tournament on Saturday.

This year’s WIAA Division 3 state tournament was different for Poynette junior 138-pound wrestler Cash Stewart in more ways than one.

It was much different surroundings for Stewart and the rest of the Division 3 wrestlers last Saturday, as this year’s tournament was moved from the Kohl Center in Madison to Wausau East High School and was held in front of a limited crowd.

“With this weird COVID year it didn’t quite feel like state,” Stewart said. “It definitely wasn’t like at the Kohl Center, but it was still a great experience to be a part of. It didn’t feel like state but more like a normal tournament. It wasn’t quite the same.”

Stewart also had a different outcome form last year’s tournament run, as he came up short of repeating as state champion.

“A loss like this is going to push me and help me focus more on my goals,” Stewart said. “Hopefully it is going to make me a better wrestler.”

“I feel pretty good, but it wasn’t exactly what I wanted,” Hamre said. “It still is an amazing accomplishment. I finished one place higher than last year. I had a couple of times I didn’t wrestle my best, but I worked through it and placed pretty high.”

The day started out great for Stewart, as he scored a 10-1 major decision over Reedsville’s Blake Delsman in the quarterfinals. Stewart scored two takedowns and three back points to take control in the first period.

Then in a battle of returning state champions in the semifinals, Stratford’s Gavin Drexler ended Stewart’s repeat title hopes with a 12-4 major decision. After scoring the first takedown of the match, Stewart was never able to get on track and scored just a pair of escapes the rest of the match.

“Gavin is a great opponent,” Stewart said. “At the end of the day, I needed to go out and get off more of my offense and attack more. I left the match in his hands and he capitalized. He was a great opponent and is a two-time state champion now.”

Stewart rebounded in a big way and outscored his final two opponents of the tournament by a score of 30-1.

“After the loss, I was upset but I had to remember I had to keep my head straight, keep my composure and go out and wrestle the rest of the tournament,” Stewart said.

Stewart earned a 17-0 technical fall over Clear Lake’s Tyler Sunday in the consolation semifinals. He then defeated Riverdale’s Ashton Miess 13-1 in the third-place match.

Stewart finished the season with a mark of 10-1.

Hamre had a long road to third place after falling 6-3 to Stratford’s Elijah Lucio in the opening round. Hamre rebounded with three straight victories.

“I didn’t wrestle my best in my first match, but then my next couple of matches I wrestled really hard and it paid off,” Hamre said. “It was an amazing experience.”

Hamre started his turnaround with a 7-1 victory over Pittsville’s Camron Dammann. He then won by injury default over Bonduel’s Tyson Bogacz in the consolation semifinals.

In the third-place match, Hamre scored takedowns against La Cross Aquinas’ Joseph Penchi in each of the first two periods and led 4-1 entering the final frame. Penchi tied the match with three back points, but Hamre got an escape with 54 seconds remaining to win 5-4.

Hamre finished the season with an impressive record of 16-2.

“It was a fun year but it had its challenges with masks, the rules and not having a lot of matches,” Hamre said. “It is just awesome that I did this good this year. I could have done better if we had a longer season or just a regular season.”

The good news for Stewart and Hamre is that they both will be in contention for state medals next season, when hopefully things get back to normal.