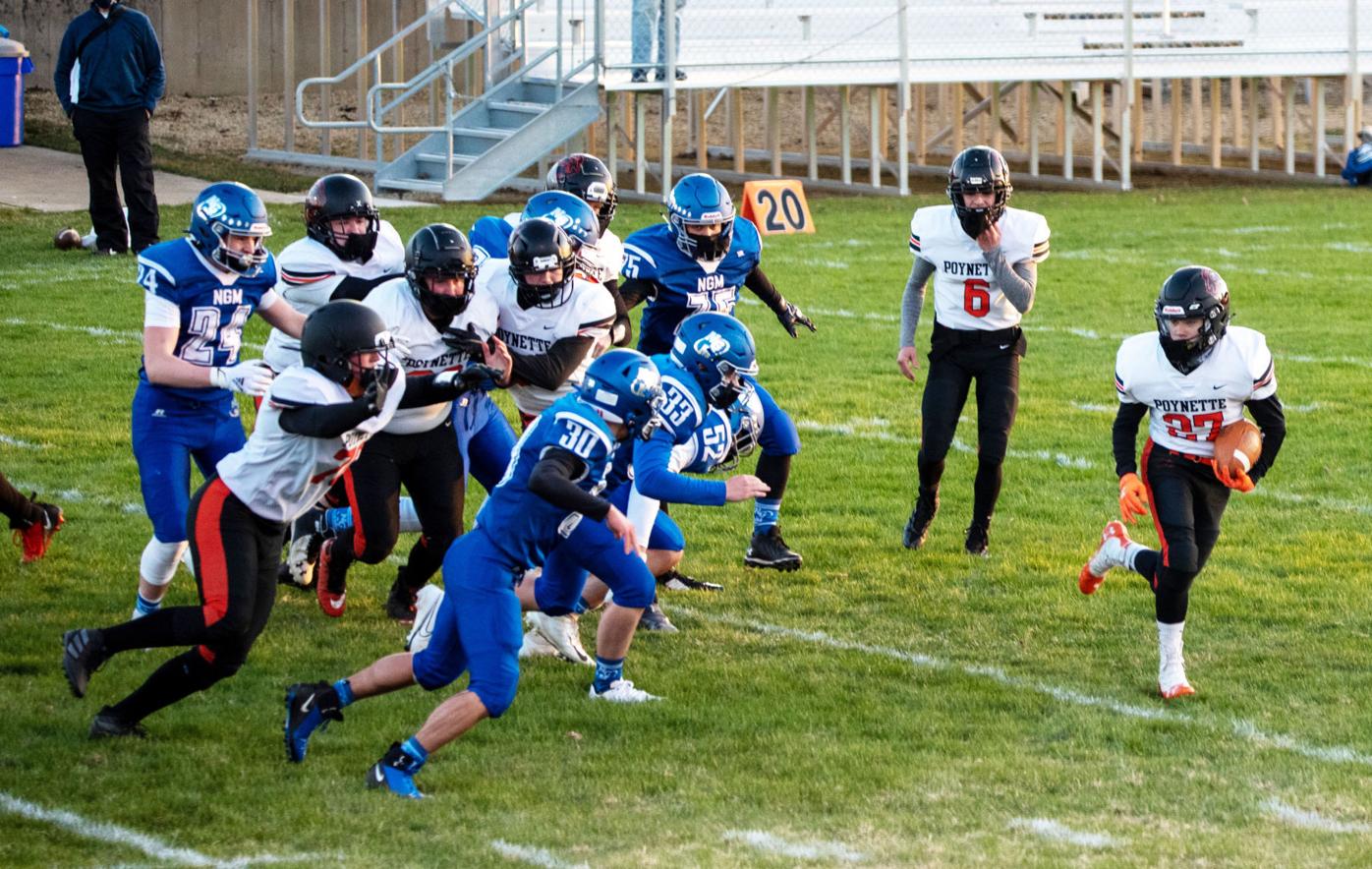 Poynette’s Connor Anker races to the outside on New Glarus-Monticello’s defense last week. 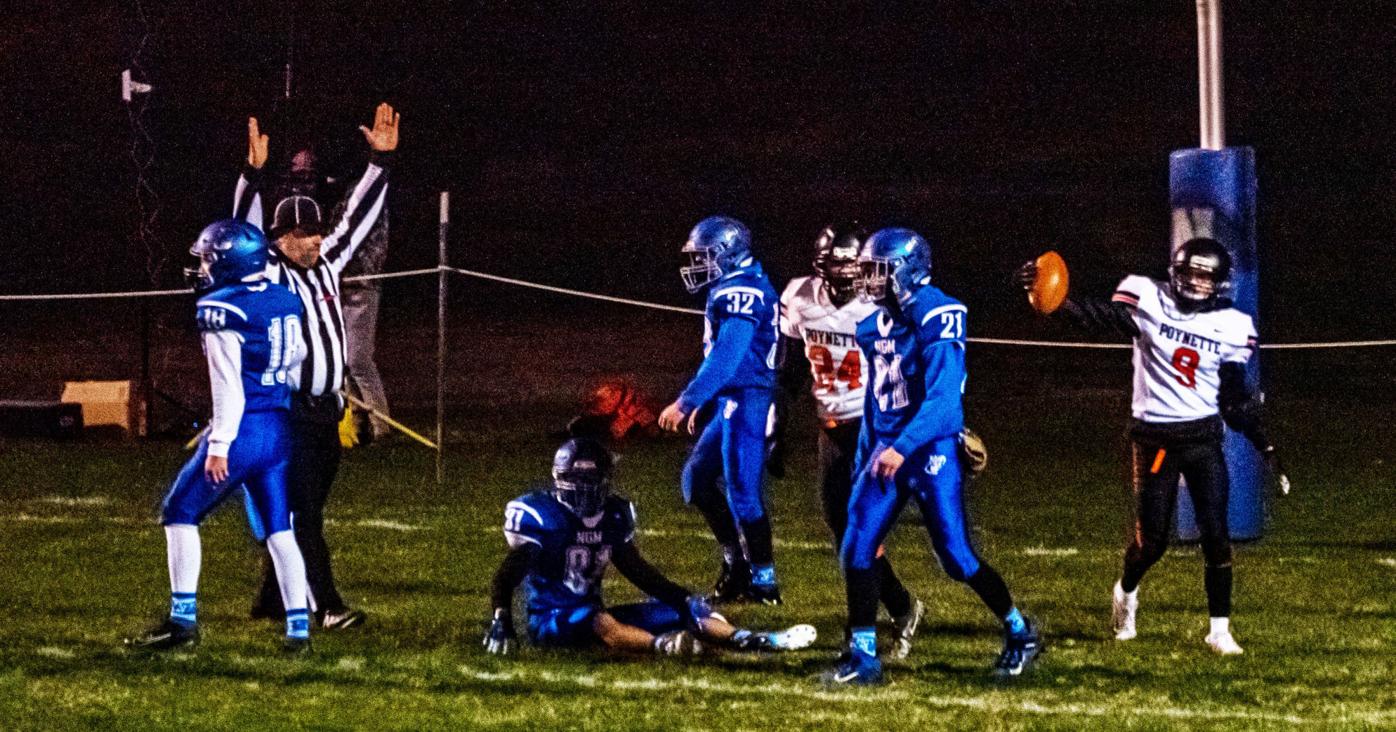 Hans Mueller (9) scored the lone touchdown for Poynette in a 34-7 loss to New Glarus-Monticello.

Poynette’s Connor Anker races to the outside on New Glarus-Monticello’s defense last week.

Hans Mueller (9) scored the lone touchdown for Poynette in a 34-7 loss to New Glarus-Monticello.

The Poynette prep football team was unable to build off the momentum it gained in its spring-opening victory over Parkview in its matchup with host New Glarus-Monticello on April 1.

The Glarner Knights used a big first half to sprint past the Pumas 34-7.

“New Glarus definitely has a lot of talent and is a very good team,” Poynette coach Greg Kallungi said. “They were able to take advantage of any miscues that we made. Give New Glarus a lot of credit for sure, but we didn’t make things easy on ourselves with the mistakes we made, especially in the first half. There were a number of times where we had guys in position defensively, but weren’t able to make a play, or we helped them out with an untimely penalty that helped them to extend drives. Offensively, it was the same sort of thing--either a penalty that set us back and made it difficult to move the chains, or a missed assignment type thing. You can’t do that against good teams.”

The loss dropped Poynette to 1-1 overall.

New Glarus-Monticello set the tone with 13 points in the first quarter. They extended the lead to 28-0 at halftime.

The Knights got onto the scoreboard less than two minutes into the game, Darries Schuett tossed a 29-yard touchdown pass to Nathan Streiff.

New Glarus-Monticello were unsuccessful on the ensuring two-point conversion attempt.

The Glarner Knights extended the lead to 13-0 midway through the first quarter after another touchdown pass by Schuett. He had a 36-yard scoring strike to Peter Gustafson. Jaylynn Benson added the extra-point kick.

Schuett continued his big game with a third touchdown pass with 4:02 left in the first half. He hooked up with Streiff for a 10-yard touchdown.

Schuett ran in the two-point conversion to increase the lead to 21-0.

New Glarus-Monticello extended the lead to 28-0 with 41 seconds remaining in the first half after a 2-yard touchdown run by Schuett and extra-point kick by Benson.

The Glarner Knights closed out their scoring midway through the third quarter with a 31-yard touchdown pass from Schuett to Streiff. They missed the extra-point kick.

Poynette finally got on the scoreboard with 1:21 remaining in the contest, as Hayden Taylor threw a 22-yard touchdown pass to Hans Mueller. Jaden McCormick added the extra-point kick.

“On a positive note, we played much better on both sides of the ball in the second half,” Kallungi said. “We just need to make sure we start the game playing with that type of focus and intensity.”

Taylor finished the game 12-of-21 passing for 99 yards and a touchdown. Brock Chadwick led the way with seven catches for 57 yards.

Elsing led the way on the defense with 12 tackles, while Chadwick and Owen Bahr had 11 each.

Bahr and John Madigan both had a sack for Poynette, while Chadwick had an interception.

Schuett concluded the game 25-of-44 passing for 407 yards, four touchdowns and an interception. Cade Femrite rushed for 36 yards on nine carries.

Streiff came away with a game-high 12 catches for 187 yards and three touchdowns, while Gustafson added 111 yards and a touchdown on four receptions.

The Pumas will be at home this Friday, They will host Brodhead at 7 p.m.