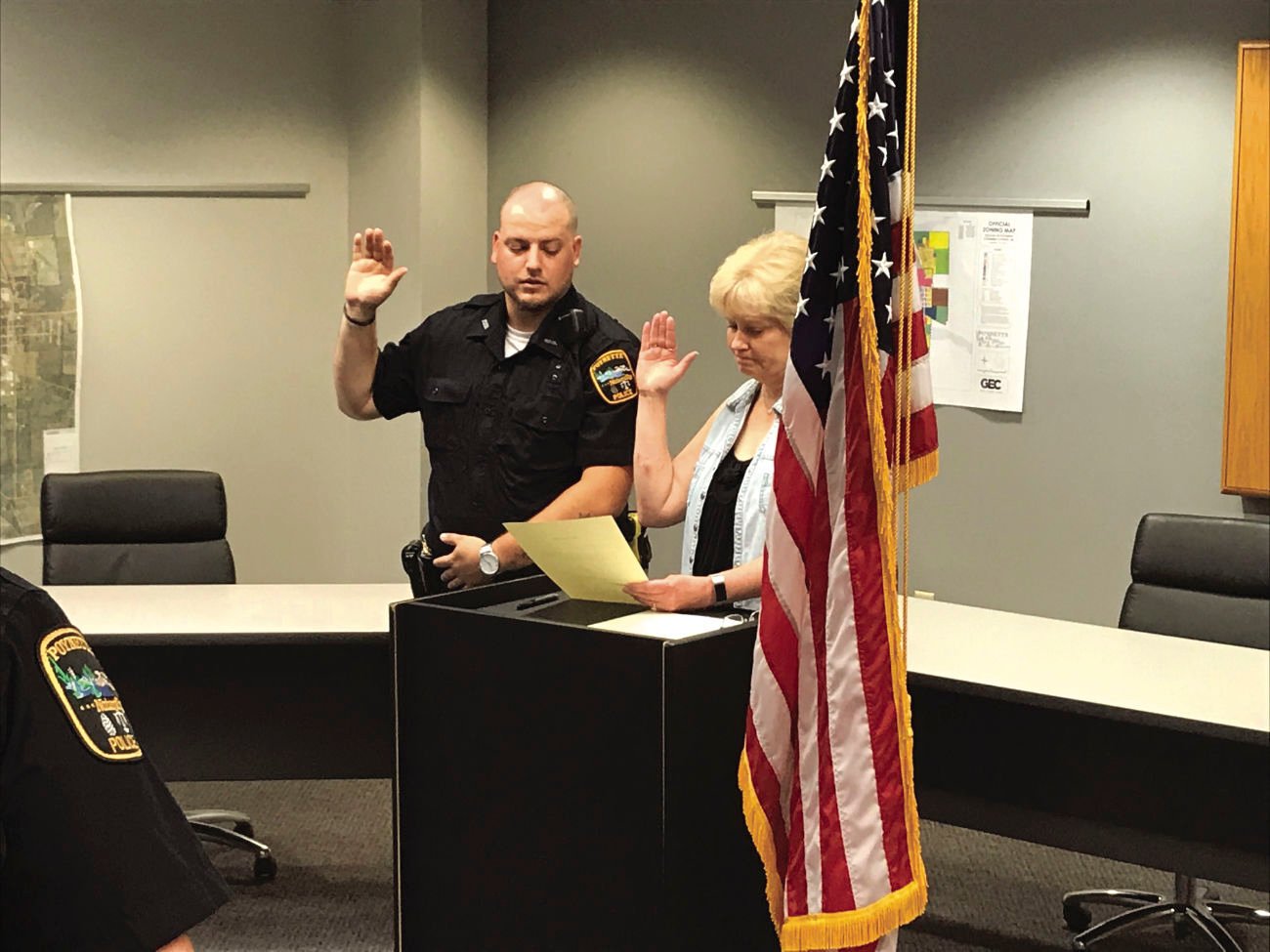 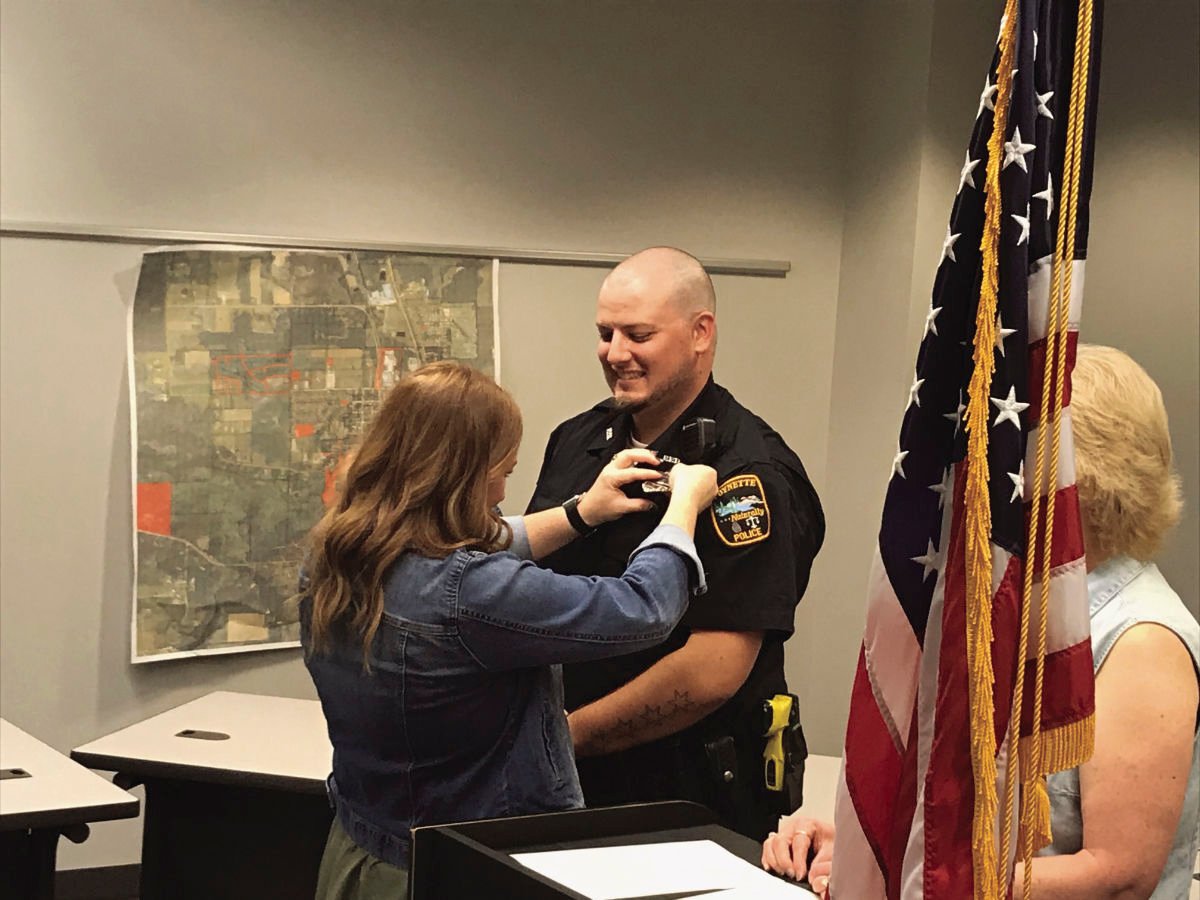 Newly sworn in Poynette police officer, Drake Coleman, has his badge pinned on him by his fiancée, Justine Craighead, during a swearing in ceremony July 16 at Poynette Village Hall. 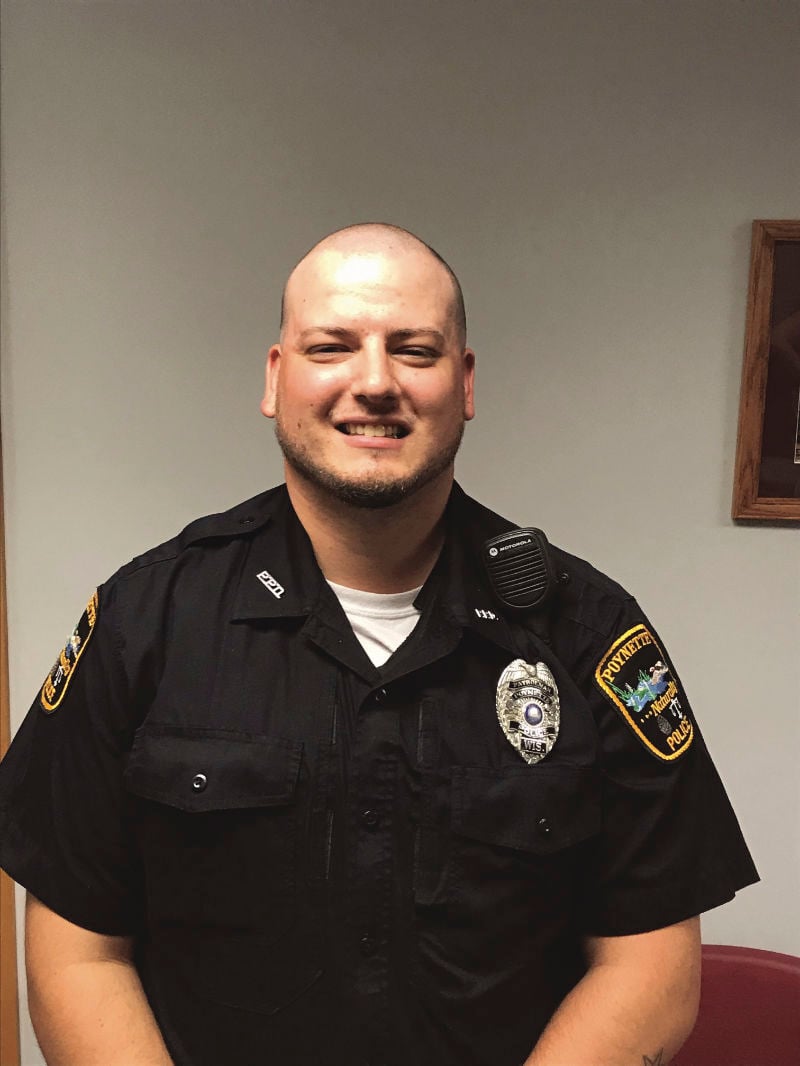 Officer Drake Coleman is the newest addition to the Poynette Police Department. He first day on the job was Friday, July 16.

Newly sworn in Poynette police officer, Drake Coleman, has his badge pinned on him by his fiancée, Justine Craighead, during a swearing in ceremony July 16 at Poynette Village Hall.

Officer Drake Coleman is the newest addition to the Poynette Police Department. He first day on the job was Friday, July 16.

The Poynette Police Department didn’t have a vacancy within its force for very long.

On Friday, July 16, Drake Coleman was sworn in as a new officer for the village. Coleman fills the opening left by Officer Kyle Giese, who took an officer position for the Baraboo Police Department.

Poynette Police Chief Eric Fisher made the announcement of the hiring of Coleman at the July 12 Village Board meeting. Coleman’s first official day on the job was July 16.

Coleman grew up in Baraboo and is a 2015 graduate of Baraboo High School. He then graduated from the University of Wisconsin-Platteville in December 2018 with a bachelor’s degree in Criminal Justice and an associate’s degree in Business Administration.

He completed his academy in 2020 at Southwest Technical College in Fennimore. His first job out of the academy was as a part-time officer for the Wisconsin Dells Police Department, which he began in May.

“I was on foot patrol and walked the strip,” Coleman said. “I saw a wide variety of Dells action, that hopefully I can incorporate some of that information here in Poynette.”

Even though Coleman’s time in Wisconsin Dells wasn’t long, Fisher pointed out to the Village Board on July 12 that the new hire had gained a good amount of experience in the field.

“I saw a lot of different stuff even though I wasn’t there long,” Coleman said.

Staying close to home was a perk for Coleman when applying for the open position, as was the smaller community atmosphere.

“I’m 25 minutes from home, and Poynette reminds me of home with all the community support,” Coleman said.

Being around the department for a short time, and after he was sworn in, Coleman said he already felt at ease in Poynette. He knows that he will get to know the community well over the next few months and years.

“I feel lot more comfortable here than in the Dells,” Coleman said. “In the Dells, you don’t get to know much of the community because so many people are in and out. Here you can form more relationships.”

Like Baraboo, Coleman knows that the residents of the village care about the community so much. That caring attitude was something he didn’t always see while working in Wisconsin Dells for that short amount a time. With that area being a hotbed for tourists from all over the state, country and world, Coleman pointed out that many people he had to come in contact with didn’t always take care of places they were staying or visiting, or care what things looked like once they were gone.

“In the Dells, there’s a lot of tourists and weekend parties, so a lot of people don’t about care what they do (when in town),” Coleman said. “Poynette cares a lot about its community. I’m excited to be here.”

Also, a full background check was conducted by Lieutenant Rogge before the department made an offer, but Fisher noted that he saw no red flags and that Coleman was a “stellar employee for all the organizations he has worked for.”

“I feel that Drake will be a great addition to the Poynette Police Department,” Fisher said in a memo to the Board. “Drake has many things to offer this agency, and his personality and work ethic will fit perfectly with the community.”

Coleman added of Poynette, “I want to work here for as long as I can, and give my all to the community.”

Coleman was hired at the starting rate of the department’s pay scale, which is $49,732.80 per year, or $23.91 per hour, based on the union contract. His field training will begin immediately.