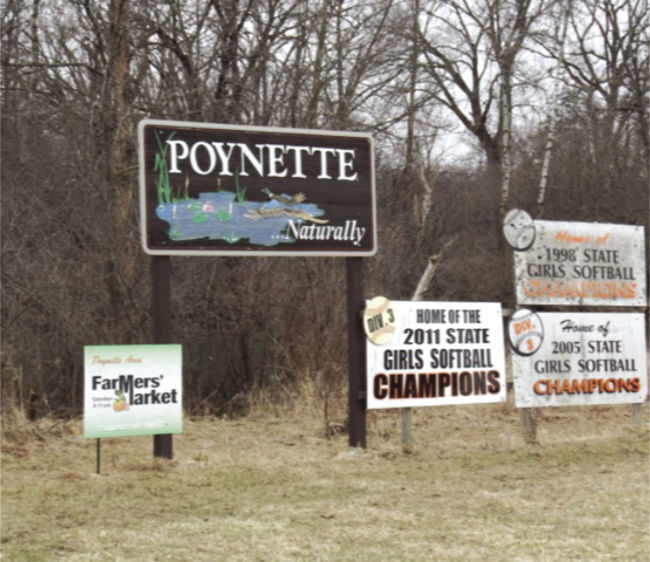 This welcome sign to Poynette is seen by traffic entering the village from the north on U.S. Highway 51. 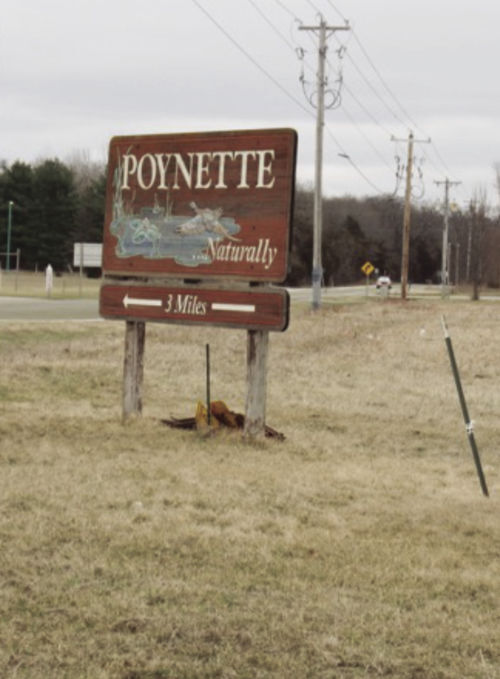 This welcome sign to Poynette is seen by traffic entering the village from the west, near Interstate 39/90/94.

This welcome sign to Poynette is seen by traffic entering the village from the north on U.S. Highway 51.

This welcome sign to Poynette is seen by traffic entering the village from the west, near Interstate 39/90/94.

During its Committee of the Whole meeting on March 22, the Poynette Village Board was in favor of trying to update its welcome signs on the main thoroughfares into the village.

When, and if, the time and funds allow, the Board seemed in general agreement of adding brick or stone to the signs, making them more appealing. The item was brought to the agenda by Trustee Steve Mueller because he wanted something done as smaller communities around the Madison area are expected to grow in the coming decade.

Mueller had the idea of making the signs — especially the ones on U.S. Highway 51 and County Highway CS — more durable.

“I think it will bring up the standard of our community,” Mueller said.

President Diana Kaschinske added, “I would like to see them dressed up as well.”

No official action was taken, as the starting point will simply be Village Administrator Martin Shanks reaching out to various places to get quotes for possible masonry added to the the signs. Once the quotes are received by Shanks, the Board can then make further decisions of whether it wants to proceed with the idea or not.

Trustee Chris Polzer wondered if the village should reach out to the Poynette Area Chamber of Commerce as well, to see if they would be interested in helping this potential project, too.

There are currently three “Poynette … Naturally” signs at various entry points to the village — two on Highway 51 for north and southbound traffic, and one near the Interstate 39/90/94 corridor for those entering Poynette from the west.

According to Shanks, the village has recently refurbished the two signs on Highway 51. Those two signs also sit on private property (owned by Alliant Energy and Lakeside Foods, respectively). Shanks found that no easements were recorded for either sign on Highway 51. Therefore, the signs cannot be modified, or replaced, without consent from those owners.

The sign on CS is in the right-of-way and Shanks is unsure if the village received formal approval from the town of Dekorra, or a permit from the county to put up the sign. If any work is to be done to that sign, consent of the county or Dekorra should be sought.

Highway 51, County Highway CS/Q and local roads. On Hwy 51, any sign placed needs authorization from the Wisconsin DOT, while authorization is needed from Columbia County for any sign on CS/Q and from other towns for any sign on local roads (if it is in their boundary). The village does not own any properties along the Hwy 51 or local road corridors, but does own Jamieson Park along Highway CS/Q. In all cases, the village will need to work with private owners for placement of a sign, or put it in the respective right-of-way.

In other news, the Board was also in favor of having the village honor the request made by Jennifer Radewan on behalf of Black Dog Investment Group LLC for its property at 1000 Links Drive — the former restaurant located at Pauquette Pines Golf Course, now Shepherds Meadow.

Radewan, whose company already has a conditional use permit to make the building a restaurant, meeting space/event center, and a fitness facility, now wants to erect a sign in the right-of-way near the parking lot of the golf course and current empty building. The request by Radewan is for the sign to be placed at the curved intersection of Pauquette Pines Lane and Links Drive, near the recently dedicated portion of a future easterly extension of Pauquette Pines Lane.

In her letter to the Board, Radewan stated that the sign will be at the minimum distance allowed from each lot line in order to give as much leeway to any future construction on neighboring lots.

“We understand the sign will be removed if requested by the village for any future street extension,” Radewan wrote.

With the Board in general agreement, a formal document will be drawn up, that will first go to the Plan Commission for recommendation to the Board for its further approval.

Mueller added, “We need to get that back to a productive piece of property.”

The Village has granted to similar privileges in recent years, according to Shanks. One was to the Woodland Ridge Home Owners Association (HOA) for a subdivision sign — something that never materialized — and the other was for the current sign for Whispering Pines Event Center.