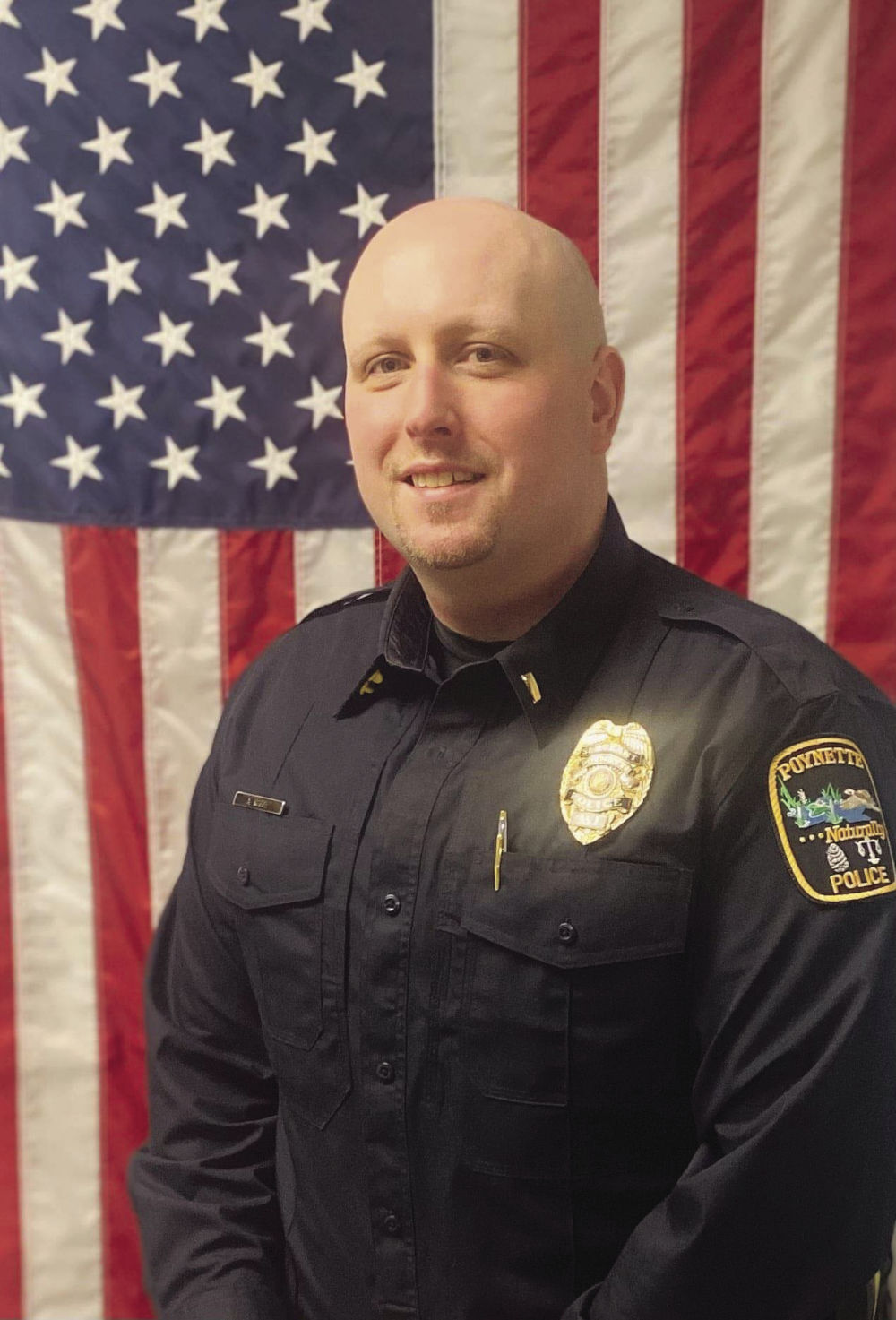 Adam Rogge was sworn in as Lieutenant of the Poynette Police Department on Jan. 11. It’s a first for the department as the Lieutenant position was newly created at the request of Chief Eric Fisher. Rogge has 15 years of law enforcement experience.

New Poynette Police Lieutenant Adam Rogge has his badged pinned on by his wife, Eden, as he is sworn into the department on Jan. 11. Rogge has 15 years of law enforcement experience.

Adam Rogge was sworn in as Lieutenant of the Poynette Police Department on Jan. 11. It’s a first for the department as the Lieutenant position was newly created at the request of Chief Eric Fisher. Rogge has 15 years of law enforcement experience.

New Poynette Police Lieutenant Adam Rogge has his badged pinned on by his wife, Eden, as he is sworn into the department on Jan. 11. Rogge has 15 years of law enforcement experience.

Adam Rogge was officially sworn in as Lieutenant for the Poynette Police Department on Monday, Jan. 11. It was a first for the department as the position was recently created at the request of Chief Eric Fisher to provide more structure within the small department and way for him to get more assistance in a non-union position.

Being a small community, and one with an open leadership position, is what drew Rogge to Poynette. Living and working in a smaller community is something that he is very familiar with.

Rogge grew up in Weyauwega — located about halfway between Stevens Point and Appleton — and later worked for the police department there. He was with the department for 10 years and held a supervisor role.

He eventually made his way to the Franklin Police Department, where he worked for about five years as an officer. It was the position he held while accepting the position in Poynette. Rogge knew that he wanted to continue and advance his career.

“I went back to school to get my Bachelor’s Degree so I could look for more of a leadership role,” Rogge said.

While looking at the Poynette position, Rogge made the decision that it could be a good place to bring his family.

“My wife and I wanted to get back to our roots (of a small community), and raise our family in a small community,” he said. Rogge and his wife, Eden, have six children, whose ages range from 13 to four months.

Chief Fisher officially introduced Rogge to the village board at its meeting on Jan. 11, where he added of the hire, “I feel this will be very good for the department and the village.”

Rogge went on a few ride alongs with the Poynette Police Department and made several trips to the village — to search for homes, pick up equipment and get a feel for the area.

“We came here about four or five times to make sure this was a good fit,” Rogge said.

Rogge also dealt with narcotics while in Franklin, hoping that the added experience will help as he joins the force in Poynette.

“I hope to bring a variety of experience, from being a supervisor in a smaller community, to working in the Milwaukee-metro area,” Rogge said. “I hope to bring different specialties. … I want to share those experiences and that knowledge.”

And the biggest difference between a small and large department is something that continues to draw Rogge to those departments in smaller communities.

“In a small community, you get to know the people, and take more of an ownership in the community,” he said. “In a larger community, it’s difficult to do that because you see different people day in and day out … You can’t build that rapport.”

Rogge’s first day on the job was Jan. 11 — the first of hopefully a long tenure in the village.

While the great news for the department was the addition of Lieutenant Rogge on Jan. 11, the department also received some not so good news that day.

Chief Fisher told the village board during that night’s meeting that officer Aeriond Liu would be leaving the department, where he has been a part-time officer for the village.

With the addition of Rogge, it made five full-time positions under Fisher — a Lieutenant and four officers. Fisher said previously that when it got to that point, and the part-time position became vacant, he would not look to fill that role. Fisher stood true to that, and said the position held by Liu will be eliminated after Jan. 30 — Liu’s official last day with the department.