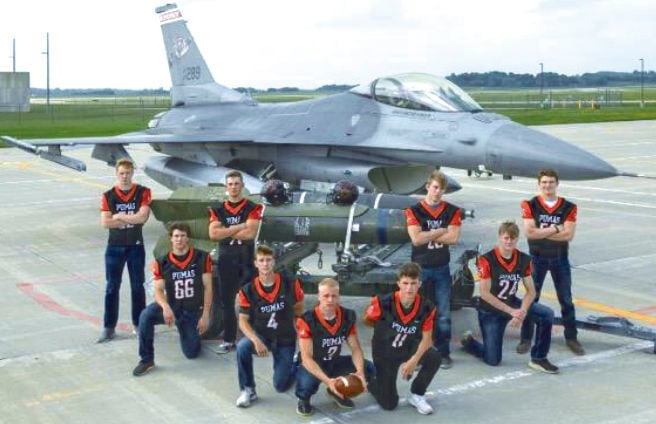 Seniors on the Poynette High School football team took photos with a jet at Truax Field recently. One was used for a poster. Numbered 289, with Poynette written on the its intake, the jet was the same F-16 that Lowell Chadwick, the grandfather of Pumas’ player Brock Chadwick, used to work on as a jet mechanic during his years of military service. Lowell Chadwick died in 2014. 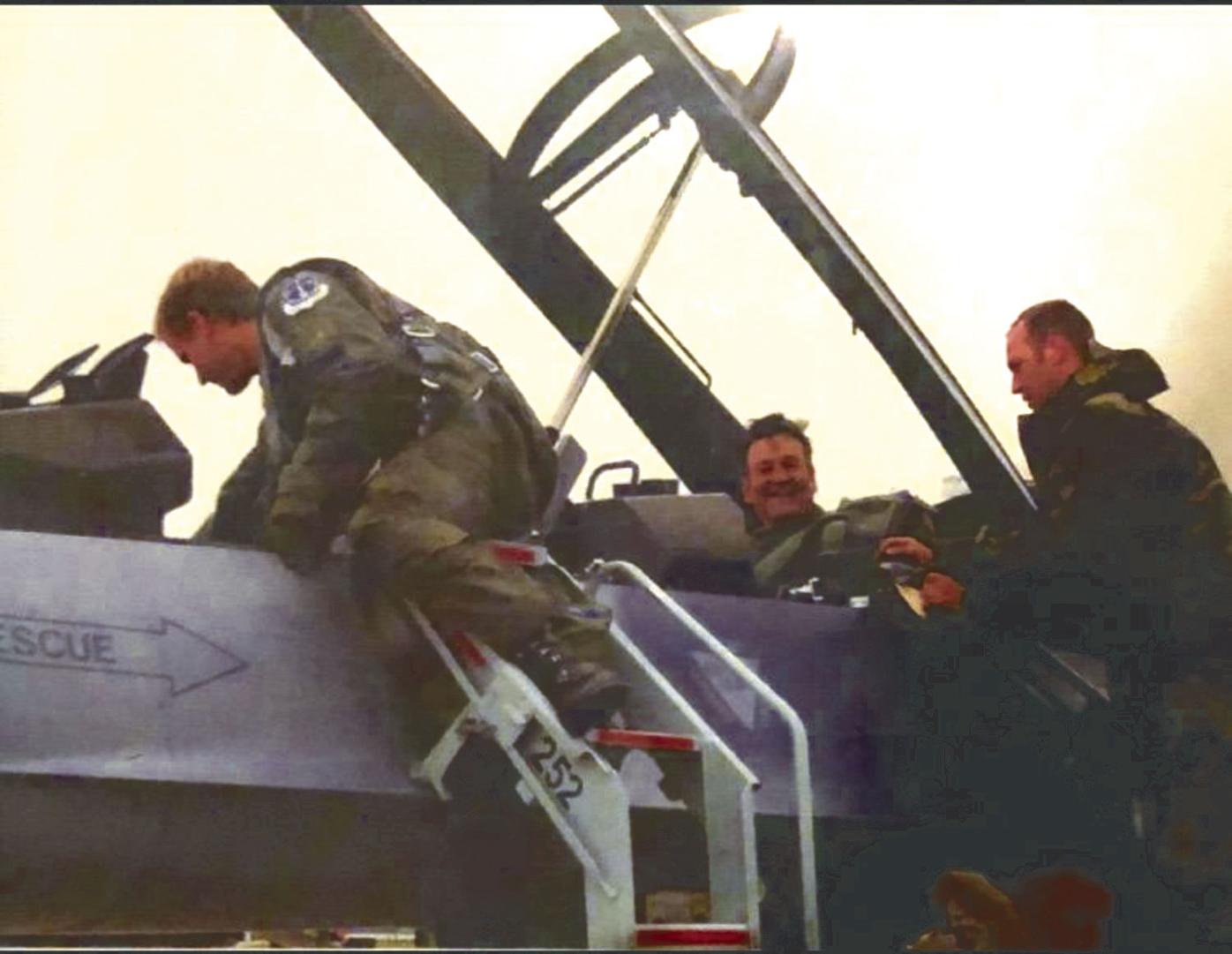 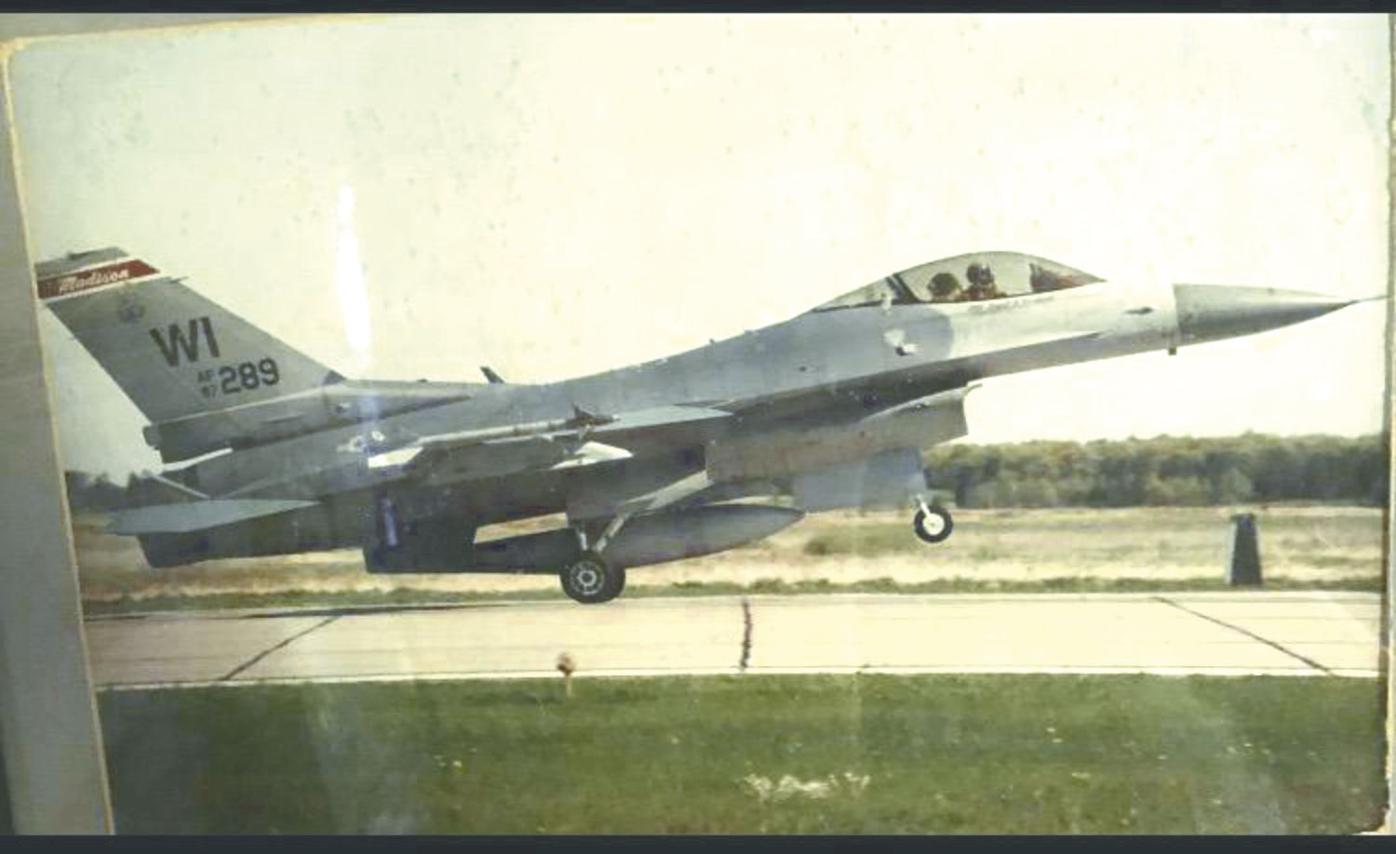 Seniors on the Poynette High School football team took photos with a jet at Truax Field recently. One was used for a poster. Numbered 289, with Poynette written on the its intake, the jet was the same F-16 that Lowell Chadwick, the grandfather of Pumas’ player Brock Chadwick, used to work on as a jet mechanic during his years of military service. Lowell Chadwick died in 2014.

Owen Bahr had a great idea.

The graduating seniors on the Poynette High School football team wanted to do something special for a poster commemorating their last season on the gridiron.

Bahr’s dad, Shawn, works at Truax Field in Madison, and Owen wondered if they could take a photo with a plane.

As luck would have it, a jet was available, but it wasn’t just any F-16. It was the one the grandfather of Brock Chadwick, one of Owen’s teammates, used to maintain.

“It was pretty special,” said Brock. “I hope Shawn and Owen realize how much it meant to me.”

Shawn Bahr set it up so the players could take photos with an F-16 numbered 289, the one Lowell worked on for years as a jet aircraft mechanic. Just like that, they had their poster.

Brock’s grandfather, Lowell Chadwick, entered the Wisconsin Air National Guard in 1966, serving full-time from 1981 to December 2005. He died in 2014, when Brock and his twin brother, Trent, were in fourth grade.

Lowell worked as a jet aircraft mechanic. His F-16 was numbered 289, and it has Poynette inscribed on the intake. Shawn explained that jet intakes often have the local towns of their crew chiefs inscribed on them.

Brock said his grandfather loved working with cars and was always fixing things.

“He always had a knife on his hip,” added Trent. The brothers said that their grandfather was also known for his hair, which he wore slicked back like Elvis.

According to his obituary, Lowell’s military service lasted more than 35 years, as he served during the Gulf War, Operation Enduring Freedom and other overseas operations. Shawn Bahr said they were once deployed together in Turkey.

“He was really fun to be around, good-hearted, joking,” said Shawn. “He was very knowledgeable.”

Shawn Bahr, who has worked at Truax for the past 21 years as a jet mechanic, said he used to go to his dad when he had questions about maintenance issues.

“When people see those jets flying overhead, they don’t know what goes into that,” said Shawn.

The jet and the photo shoot

When Owen Bahr voiced the possibility of getting a photo with a jet, it was met with enthusiasm by his teammates.

“Everyone liked the idea,” said Brock Chadwick. “It was pretty cool to be able to go on the base.”

Trent Chadwick, who competes in cross country for Poynette High School and doesn’t play football, also thought the experience was meaningful, especially since he plans on joining the Air National Guard after high school and wants to work at Truax.

Shawn has seen the poster. He said it turned out very nice.

“They got to pick out one of the better photos,” said Shawn.

The players were able to spend an hour and a half at Truax that day. Brock said they got to see into the cockpit of the jet. Shawn Bahr said he was able to corral two pilots to show them around and explain a lot of the features of the aircraft, a single-seat C-model jet.

Lowell’s F-16 is a 1987 model that is still in use. The 289 had just come back from maintenance the week before they were planning to take photos for the poster. Trent and Brock Chadwick were also able to take photos together with the jet. They were sent to their grandmother, Ruth, who still lives in Poynette. They said she has all kinds of photos of Lowell with his jet.

The F-16s are beginning to be phased out at Truax, said Shawn, with F-35s moving in. With all the maintenance done on those jets, Shawn said the 289 that Lowell worked on is “almost as good of quality as when it came off the line.”

Of the photo shoot, Shawn said, “It was a great experience for the kids and their families … it was fun.”