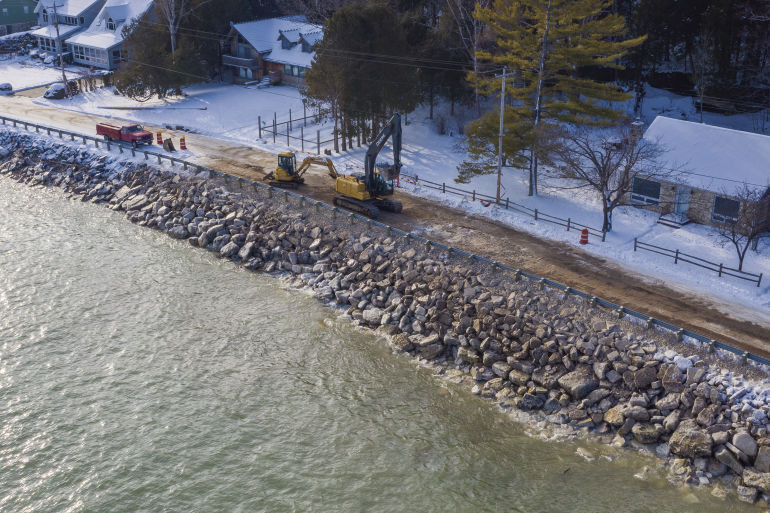 Town of Baileys Harbor maintenance crews and contractors work to restore residential access with giant limestone boulders after the road collapsed into Lake Michigan due to high water levels. This photo was taken Dec. 19, 2019. 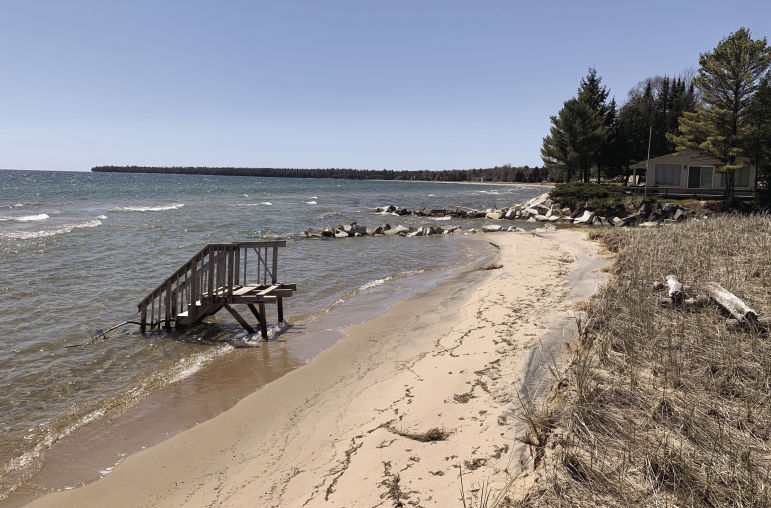 The position of steps going into Whitefish Bay in Door County illustrates erosion along the beach. This photo was taken May 12, 2020.

Bo and Mindy Ellis needed to act to keep their house from sliding into Lake Michigan.

With their home 8 feet above the waves and 20 feet from the shore of Whitefish Bay in Door County, Wisconsin, the couple watched last year as the lake’s waters rose, whittling away the shoreline.

Crashing waves undermined a protective stone revetment. A creek cutting across their property compounded the erosion. The beach used to gradually incline into the water. Now it sharply drops.

“The high water was present for such a long time that I realized I needed to do something,” Bo Ellis said.

But as other northeast Wisconsinites watched their beachfronts shrink in 2020, they overwhelmed contractors with bookings, requiring the Ellises to wait seven months for a professional to fortify their barrier. The cost: more than $37,000. The waters have since eased, but the Ellises know they will rise again.

Scientists expect erosion to worsen as climate change brings more volatility to Great Lakes levels. While that may yield extremely low waters in some years, experts also expect dramatic shifts to high waters — adding power to waves that punish shorelines. Between record-low waters in January 2013 and a record-high in July 2020, Lakes Michigan and Huron collectively swung more than 6 feet.

Eyeing such consequences, experts are calling on communities to find new ways to protect shorelines.

Lake Michigan’s levels have fluctuated in cycles throughout its recorded history, swinging up or down roughly every three to 10 years. Shoreline residents are now living through the most dramatic swing in their lifetimes.

Unlike oceans, which are steadily rising with global temperatures, water levels on the Great Lakes largely depend on the weather — rising with deposits from rain and snow, waning as water evaporates.

Absent human intervention and new climate trends, Lake Michigan’s shoreline has traditionally eroded by an average of about a foot annually, Meadows said. But increasingly frequent storms are energizing waves that pummel shorelines. In 2020, waves carried up to 25% more energy compared to the low-water year of 2013.

“The natural process is for people to try to fight against nature,” by building barriers, Meadows said. “When we go through episodes of extremely high water levels, like we just went through in 2020 for Lake Michigan, that erosion rate goes up catastrophically, from one foot per year to 10, 20 or 30 feet per year, depending on where you are on the shoreline.”

Requests for “emergency self-certifications” — a temporary DNR permit to protect homes or other structures facing imminent danger from accelerating erosion — soared more than 830%, from fewer than 30 applications in 2018 to 280 in 2020.

Those figures offer only a partial glimpse of Lake Michigan shoreline. The DNR issued most permits in Door County, which it considers an “area of special natural resources interest” — a sensitive habitat where permits are required.

Property owners to the south are not required to seek permits for new barriers, so long as they meet DNR’s standards.

As a result, the DNR does not track structures built along most of Wisconsin’s Lake Michigan shoreline. That lack of data makes it tougher to monitor the downstream impacts from such structures, the agency acknowledges.

A dispute that played out at Concordia University Wisconsin, a private college just north of Milwaukee, illustrates how armoring a shoreline can set off a domino effect.

In 2007, the university finished fortifying a 130-foot bluff and building a 2,700-foot-long rock wall to buffer waves. The $12 million project was among the largest built along Lake Michigan in Wisconsin.

While barriers like seawalls can protect the property immediately behind them, they can cut off downstream beaches from replenishing sands, accelerating erosion, Meadows said.

In 2011, two couples sued Concordia, claiming that the massive seawall worsened erosion on their properties. Owners of at least 13 neighboring properties built or reconstructed barriers in the years following Concordia’s construction, the Milwaukee Journal Sentinel reported in 2015, costing neighbors more than $1 million.

Chin Wu, a professor in the University of Wisconsin-Madison’s Department of Civil and Environmental Engineering, authored a 2014 Journal of Great Lakes Research article finding that the Concordia project may have worsened bluff erosion south of the project.

A jury agreed in 2014 that Concordia’s seawall caused “significant harm” to neighbors. But the jury found that Concordia was not negligent in its construction, and it awarded no damages. Still, the university said it paid for at least five repair or reconstruction projects downstream.

Concordia did not offer comment for this story. In court, it did not deny that its wall affected neighbors, according to media coverage of the lawsuit. The university successfully argued that it had the right to project its land — like any property owner.

“We were experiencing significant erosion of our shoreline — one that was causing us to see acres upon acres of our property falling into the lake,” Rev. Patrick Ferry, the university’s president at the time, said in a video touting the project.

The Concordia project has accelerated erosion on downstream properties from around 9 inches to more than 7 feet per year, Meadows said.

When waves hit seawalls, water reflects back toward the lake, pulling sand farther from the shoreline. The force gradually pulls the sand deeper into the lake until it can no longer replenish the beach.

When enough sand in front of a seawall washes away, the wall will fall forward or otherwise fail, Meadows added. Aerial maps of Lake Michigan show bands of sunken structures once built to protect the shoreline. Now beneath the water, they lurk as hazards to people and wildlife.

Richard Norton has noticed that shoreline residents get stuck on one concept as he urges them to consider lake levels in their planning: The lakefront properties they own today will look much different in 30 years.

“In order for the beach to stay the same, it has to be able to change. It has to be able to move and shift and grow and decrease over time as lake levels go up and down as conditions change,” said Norton, a professor at the University of Michigan’s Taubman College of Architecture and Urban Planning. “That’s the paradox of beach dynamics.”

Armoring the shoreline attempts to “pin” to a precise location, disrupting sand’s natural movement and possibly losing beach, he said.

For cities and townships, that could mean adopting and enforcing setbacks — or revisiting plans every five to 20 years as shorelines move over time. For homeowners, this could require physically moving houses farther from the shoreline — an expensive process, Norton acknowledged, but often no more costly than building and repairing large seawalls. Some landowners have moved their homes multiple times, he said.

Norton is sympathetic to people who invested time and money into their shorelies only to see homes edging closer to a bluff or toppling into the lake. But he said the problem extends far beyond their property lines.

Experts told Wisconsin Watch that Lake Michigan’s shoreline needs managing, but the specifics depend on location.

Wu endorses nature-based coastal solutions — harnessing resources like sand, vegetation or coral reefs to create natural barriers that also benefit wildlife while allowing for some shoreline movement. While natural barriers may not offer the same protection as steel or concrete barriers, they’re often cheaper. And they help shorelines rejuvenate faster after stress from storms or high water, Wu said.

The Dutch took a similar approach when it formed the Zandmotor — or Sand Motor in English — the world’s largest experiment in coastal storm and flood defense.

As climate change and rising seas threatened the Netherlands’ coastline, the Dutch dumped onto the beach about 28 million cubic yards of sand.

Over time, wind spread the sand, adding about 3,500 acres of new beach to protect The Hague and a wider inland area. New sand and dunes coated roughly 5 miles of coastline after nearly a decade, and wildlife thrived, the Times-Picayune and Advocate newspapers reported.

“Otherwise we’ll keep going farther and farther downstream until we see all our shoreline hardened and lose our beaches,” he said. “I don’t think that’s what any of us want.”

Jack Kelly contributed reporting. This story was produced as part of the NEW (Northeast Wisconsin) News Lab and in partnership with the Door County Pulse. The nonprofit Wisconsin Watch (wisconsinwatch.org) collaborates with Wisconsin Public Radio, PBS Wisconsin, other news media and the University of Wisconsin-Madison School of Journalism and Mass Communication. All works created, published, posted or disseminated by Wisconsin Watch do not necessarily reflect the views or opinions of UW-Madison or any of its affiliates.