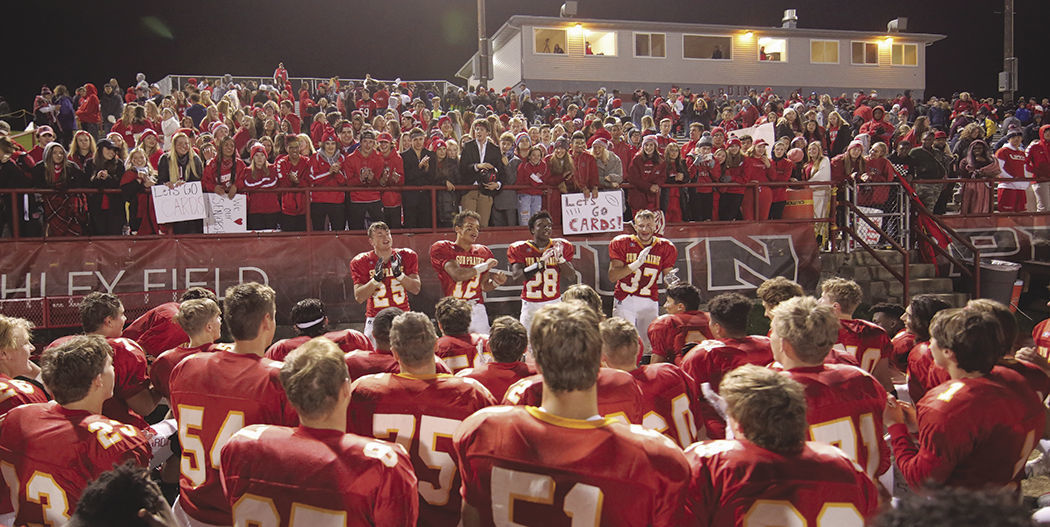 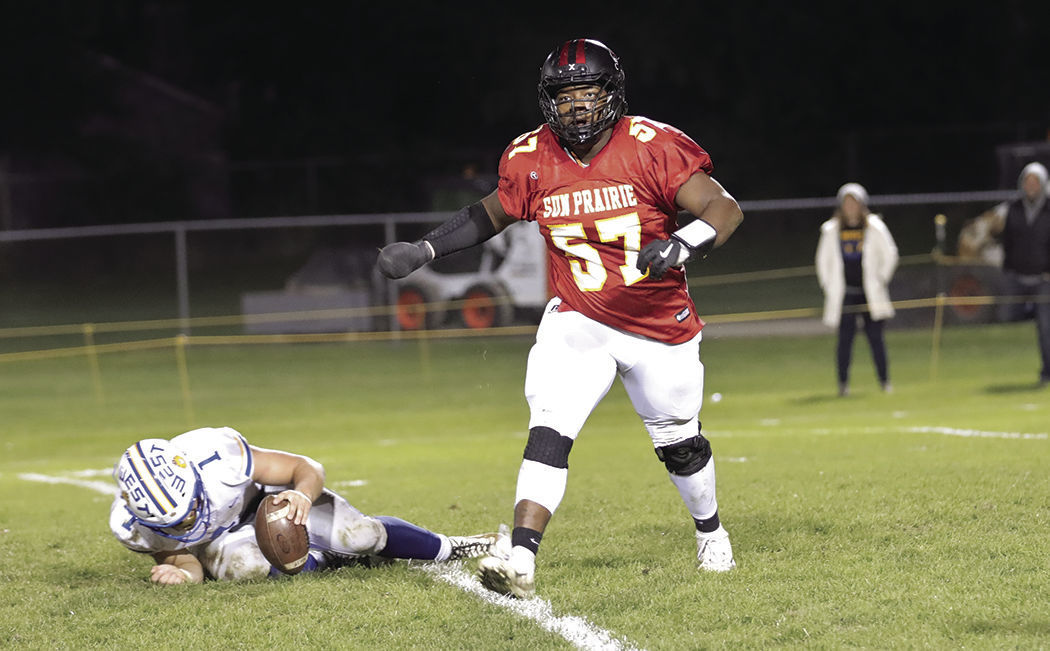 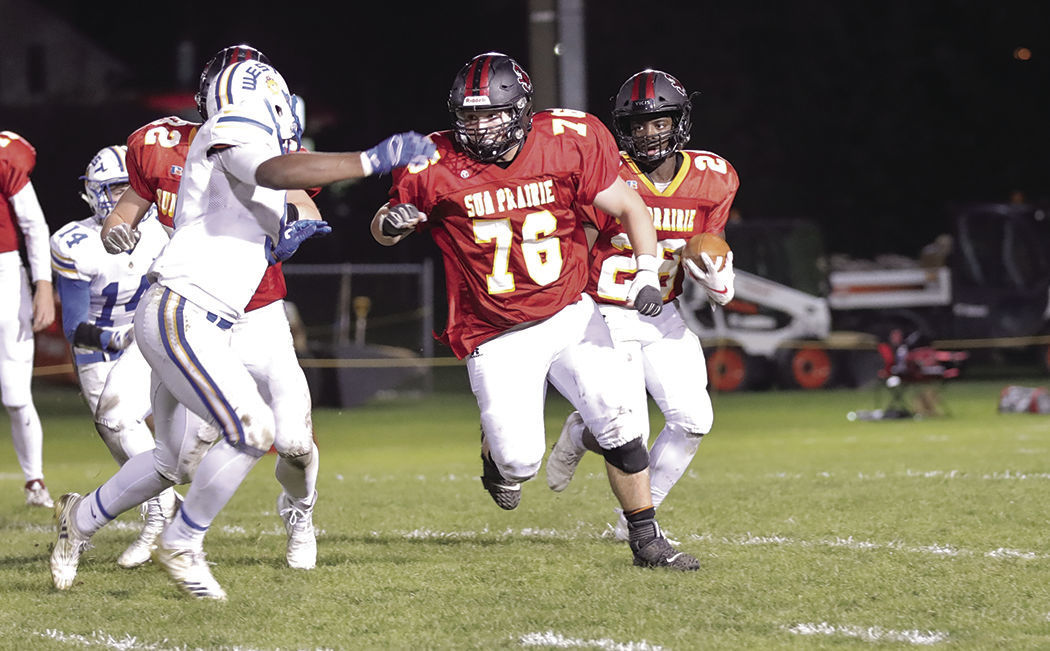 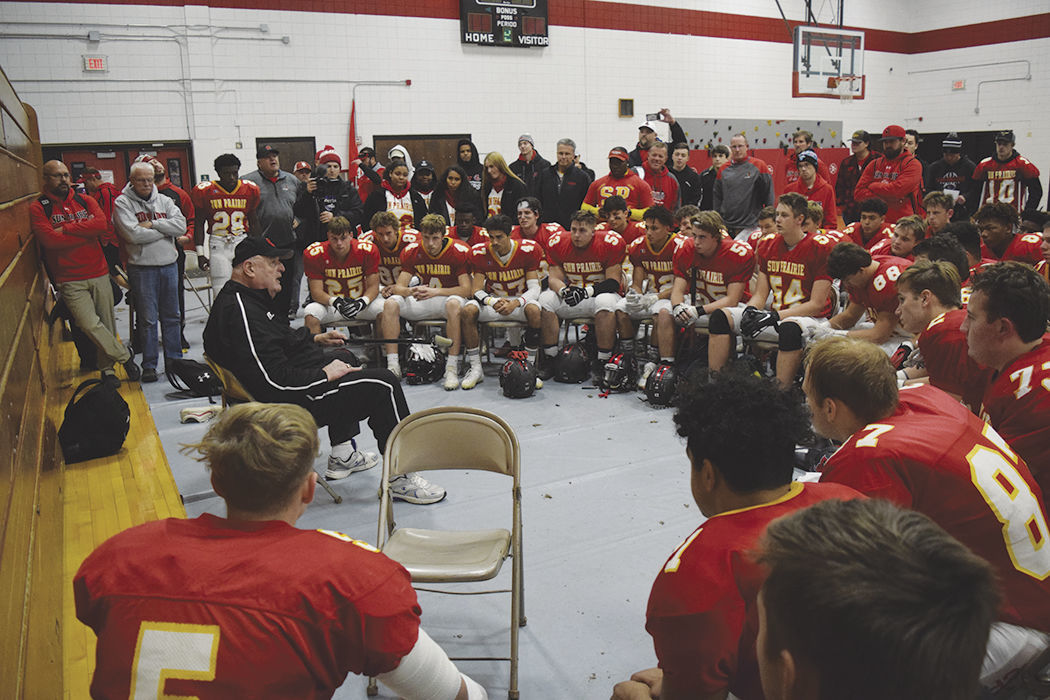 The Sun Prairie football team left Ashley Field the same way it started on it, with a victory.

A pair of second-half touchdowns separated the Cardinals from Madison West in Friday’s Big Eight Conference and regular-season finale, leading to a 21-13 win in likely the final game ever played at the current field the program has called home since 1953.

“It brings a tear to my eyes knowing that it’s gone,” said Sun Prairie head football coach Brian Kaminski. “The memories that are enshrined in this place will last forever.”

Sun Prairie (6-3 overall, 6-3 Big Eight) broke a 7-7 tie on senior Jamel Stone’s 2-yard scoring run with 4 minutes, 34 seconds left in the third quarter, giving the Cardinals a 14-13 lead, one they would not relinquish.

A week after a late turnover led to a loss to Middleton, a turnover played into the Cardinals’ favor Friday. Senior defensive tackle Terrance Briggs hit Regents quarterback Will Gutknecht while throwing, and junior linebacker Peyton Jenkins intercepted the floating football at the West 30-yard line with 6 ½ minutes remaining in the third quarter.

“Anytime we can get some takeaways, that’s huge,” Kaminski said. “That set up our offense with great field position.”

Midway through the fourth quarter Gutknecht, who led all rushers with 185 yards and two touchdowns, capped off an impressive eight-play, 78-yard drive with a 5-yard run with 3:10 remaining.

The Regents then chose to go for two points, which would have given them a one-point lead. However, Gutknecht’s pass attempt to Ezra Thomson was overthrown resulting in a 14-13 Sun Prairie lead.

“That’s a good football team,” said Kaminski. “They’re physical and they’ve been in games — they were ahead of (Big Eight champion) Madison Memorial 6-0 at halftime and all their losses were close games — we knew it was going to be a dog-fight. Our kids made the needed adjustments and were able to get it done tonight.”

Stone then put an exclamation point on the win with a 55-yard burst, and Owen Konopacki’s extra point finalized the scoring.

“That was a great run, but I wish he would have just slid down at the 10-yard line and the game would have been over,” Kaminski said with a grin. “We got the win, that’s the most important part.”

West struck first with Gutknecht scoring from 4 yards with 3:51 left in the first quarter.

Sun Prairie answered in just three plays, with junior Brady Stevens hitting senior Colin Schaefer with a 7-yard pass tying the score at 7-7. The touchdowns was set up by a 70-yard Stevens-to-Schaefer strike.

The score remained that way until the turnover led to Stone’s go-ahead score.

“Six-and-3 is not a bad record. It’s not where we wanted to be in the end, but now we’re going to go roll the dice in the playoffs and see what we can do. Our three losses were all close games against some pretty good opponents; we’re excited for the opportunity to represent Sun Prairie next week,” said Kaminski.

Mike Hahn, the all-time winningest coach in Sun Prairie football history, was in attendance for the final game at Ashley Field. Hahn addressed the team in the locker room prior to the game.

“Always B.Y.B, which means ‘Be Your Best,’” Hahn said to the players, which fired them up prior to kickoff. “If you do that, you will beat West!”

Hahn led Sun Prairie to the program’s only WIAA Division 1 state championship in 1995 and was inducted into the Wisconsin Football Coaches Association Hall of Fame in 1999.

He retired following the 2002 season.

“It was great was great to have him back in the locker room,” said Kaminski, who just happens to be Hahn’s son-in-law.

Sun Prairie received a No. 6 seed and will play a familiar opponent, No. 3 Verona (7-2) in a WIAA Division 1 Level 1 playoff game this Friday.

Kickoff in Verona is 7 p.m.

Madison West will be in the same regional. The Regents received the No. 8 seed and will face Big Eight champion and No. 1 seeded Madison Memorial.

“It brings a tear to my eyes knowing that it’s gone. The memories that are enshrined in this place will last forever.”