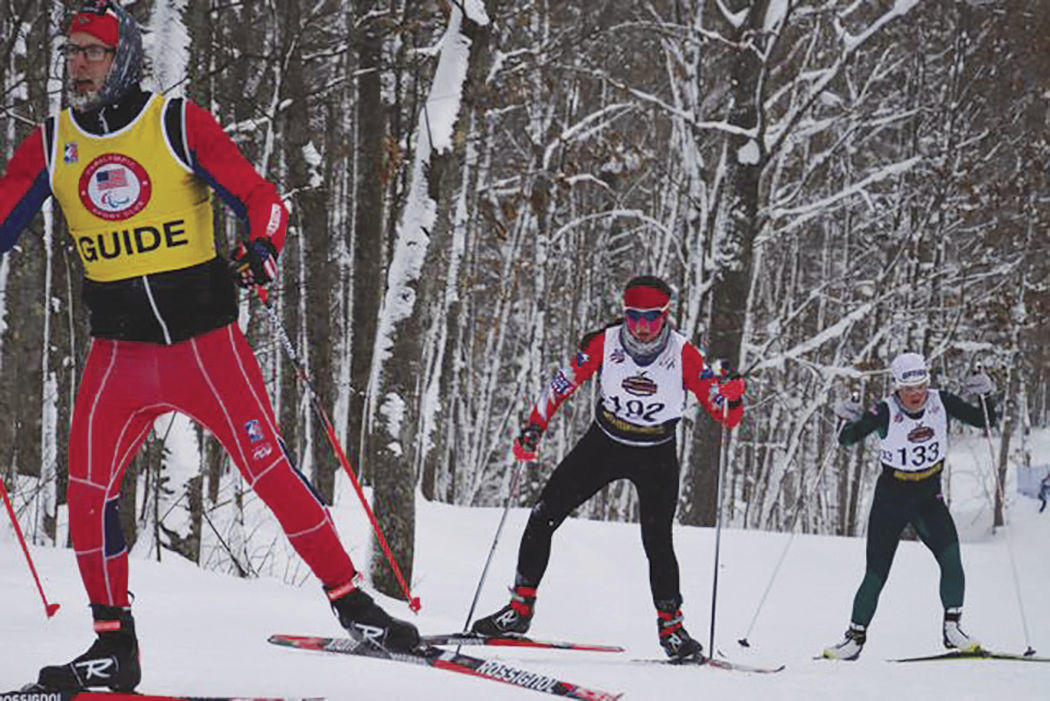 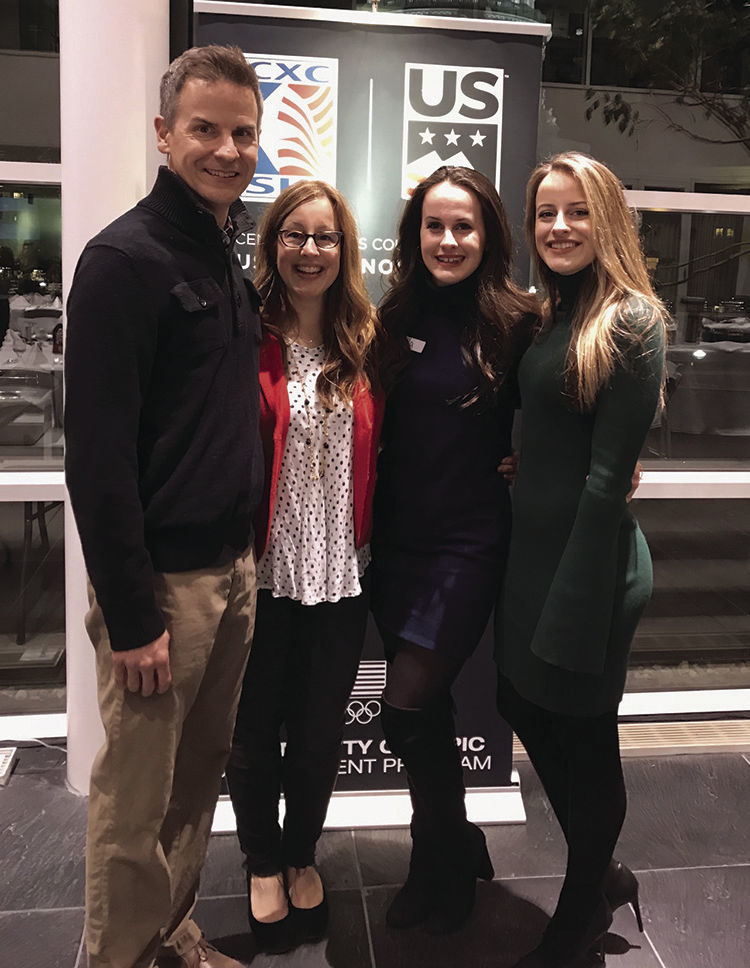 Mia Zutter’s family (above): parents Mike and Jenn, and her sister, Natalie, will be by her side in PyeongChang, South Korea. Mike and Jenn have never traveled outside of North America. 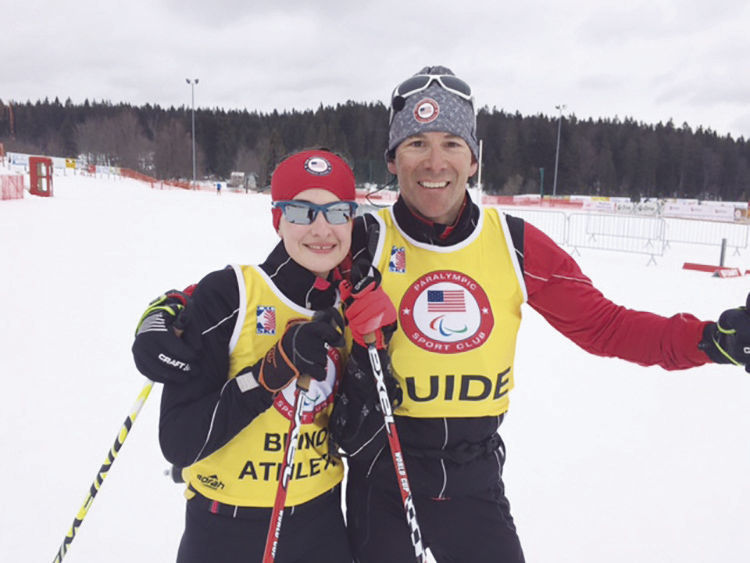 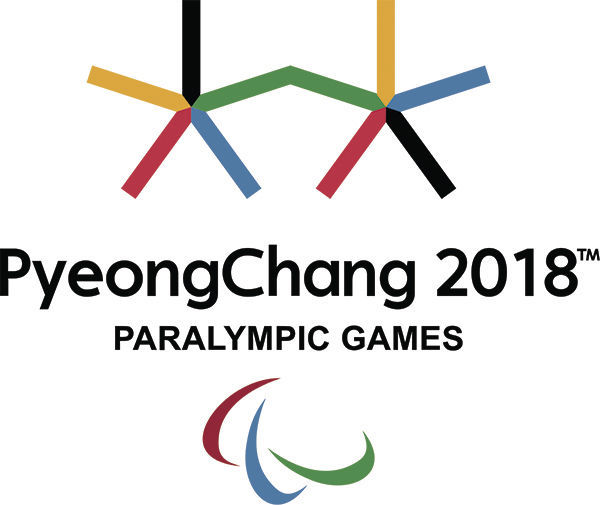 Mia Zutter’s family (above): parents Mike and Jenn, and her sister, Natalie, will be by her side in PyeongChang, South Korea. Mike and Jenn have never traveled outside of North America.

Mia Zutter sat in the audience at a fundraiser dinner in Madison. She was unaware of the magnitude of that event.

Zutter couldn’t see who was speaking to the crowd – that’s because she suffers from Stargardt disease, a degenerative eye condition that caused her to lose her central vision – but she could hear the familiar voice. It was John Farra, the director of U.S. Paralympics Nordic Skiing.

During his speech on Jan. 31, Farra slipped in the fact that Zutter had made the U.S. Paralympic Nordic Skiing Team.

Wait, what? Zutter had no idea.

The Sun Prairie native had been holding out hope for six excruciating weeks to receive word. Confirmation finally came.

“I got a little choked up and my mom was really excited,” said Zutter, who is one of just five women on the U.S. Paralympic Nordic Skiing Team. “It was just so nice to be home for that and for me to have my family there, it was just awesome.”

Zutter, who is just 18 years old, couldn’t believe all her hard work and dedication had paid off. She will represent Team USA at the 2018 Paralympic Winter Games in PyeongChang, South Korea, which run March 9-18.

“I knew she was going to achieve great things,” said Dr. Dave Gamm, who has worked with Zutter since her Stargardt disease diagnosis at age 12. “Exactly what those things would be, I wasn’t sure of. I don’t think I would have had making the Paralympics in (PyeongChang) be one of the things I would have listed.”

Zutter’s family is also excited for her to get the shot to compete on the biggest stage in sports.

“It’s an incredibly surreal moment for us as a family to have our daughter named to the team,” said Zutter’s mom, Jenn. “On the one hand, I’m not surprised because she is incredibly dedicated to her sport, but on the other hand I’m thinking, ‘Whoa.’ It’s amazing and exciting and fun, and I am just so happy for her. Even though she is visually impaired, Mia has more ‘vision’ than anyone I know.”

Zutter’s last event before being named to the U.S. Paralympic Nordic Ski Team was at the International Paralympic Committee (IPC) Nordic World Cup in Canmore, Alberta from Dec. 6-18. Zutter skied in five races, logging faster times than she had in any other World Cup she’d competed in for Team USA.

The Nordic skiing coaches realized Zutter’s potential, but she wasn’t sure if she had done enough to garner a spot on the Paralympic team. The official announcement for the squad wouldn’t be coming until Feb. 1, so Zutter had to wait. And wait.

In what “felt like forever,” Zutter was relieved when she finally received the good news.

It’s been an amazing journey in a short amount of time for Zutter, who is a freshman at The College of St. Scholastica in Duluth, Minn. She didn’t pick up skiing until she was a sophomore at Sun Prairie three years ago. Now, she’s one of the best Paralympic cross-country skiers in the country.

Zutter started her swift climb up the skiing ranks by being named to the U.S. Paralympic Development Team in June 2016. The next year, Zutter was competing for Team USA in an event in Germany.

“That was just so quick,” Zutter said. “There’s still so much I don’t know about skiing that it’s kind of crazy for me to believe that I’m on this team.”

Zutter hasn’t lost sight of the fact that she has flipped the switch, turning a negative scenario of the Stargardt disease diagnosis into a positive now that she’s a Paralympic athlete.

“Without this situation that I’m in and losing my sight I would have never considered skiing or found skiing,” Zutter said. “I’d probably be a volleyball player or something else. It’s definitely hard to feel that I’m a negative situation when I’ve been given all these opportunities through losing my vision.”

“I think what’s unique about her is I don’t know if she ever saw it as a (negative),” said Gamm, who is a UW Health pediatric ophthalmologist and the director of the McPherson Eye Research Institute. “I think she just saw it as this is who I am, what I have to deal with, these are my challenges and I will do the best I can to overcome them.

“That was infectious with everyone around her – her family, her caregivers, her primary care doctor, certainly the pediatric ophthalmology group that I work with, all of us. Everyone saw her as a remarkable young lady and somebody you wanted to help.”

Zutter doesn’t know what to expect competing in her first Paralympic Games, but she’s confident and comfortable with the course in PyeongChang. She competed in a test event last March in Korea, which was a feeling out process.

She is looking forward to experiencing all that the Paralympics entails.

“I’m really excited to stay in the Olympic Village and more of the tradition of the Olympics and Paralympics, which kind of is missing in the World Cup,” Zutter said.

Zutter won’t be alone in her journey. Her parents, Mike and Jenn, and her sister, Natalie, will be by her side in PyeongChang. Mike and Jenn have never traveled outside of North America.

“We hope Mia can live in the moment at the Games and just take in all that she’s accomplished to get there,” said Zutter’s mom. “The outcome of the races will be what they will be. We hope she just goes for it and enjoys the whole process and experience.

“We also acknowledge that nobody gets there alone and we intend to take a moment while we are there and honor the fact that without the support of many we couldn’t have made this a reality. Together we are stronger.”

Zutter left for Korea today and her first event is eight days later. That will give her time to get prepared to compete and get her body programmed to the 15-hour time change.

Zutter will be participating in three events: 15km, 7.5km and sprint races. She might also be competing on one of the relay teams on the final day of the Games.

Zutter will be competing along with her guide, Kristina Trygstad-Saari.

The teenager hasn’t set any unattainable goals for the Paralympics. She’s put everything into perspective.

“I think this year it’s getting one under my belt — feeling happy that I’m skiing, not getting down on myself if things don’t go my way,” Zutter said. “I worked so hard to qualify, and I did it. I got my goal there. Looking forward, the next Games will be in Beijing. I’m going for that one. That is where I want to be successful. I want a medal.”

“Without this situation that I’m in and losing my sight I would have never considered skiing or found skiing. I’d probably be a volleyball player or something else. It’s definitely hard to feel that I’m a negative situation when I’ve been given all these opportunities through losing my vision.”