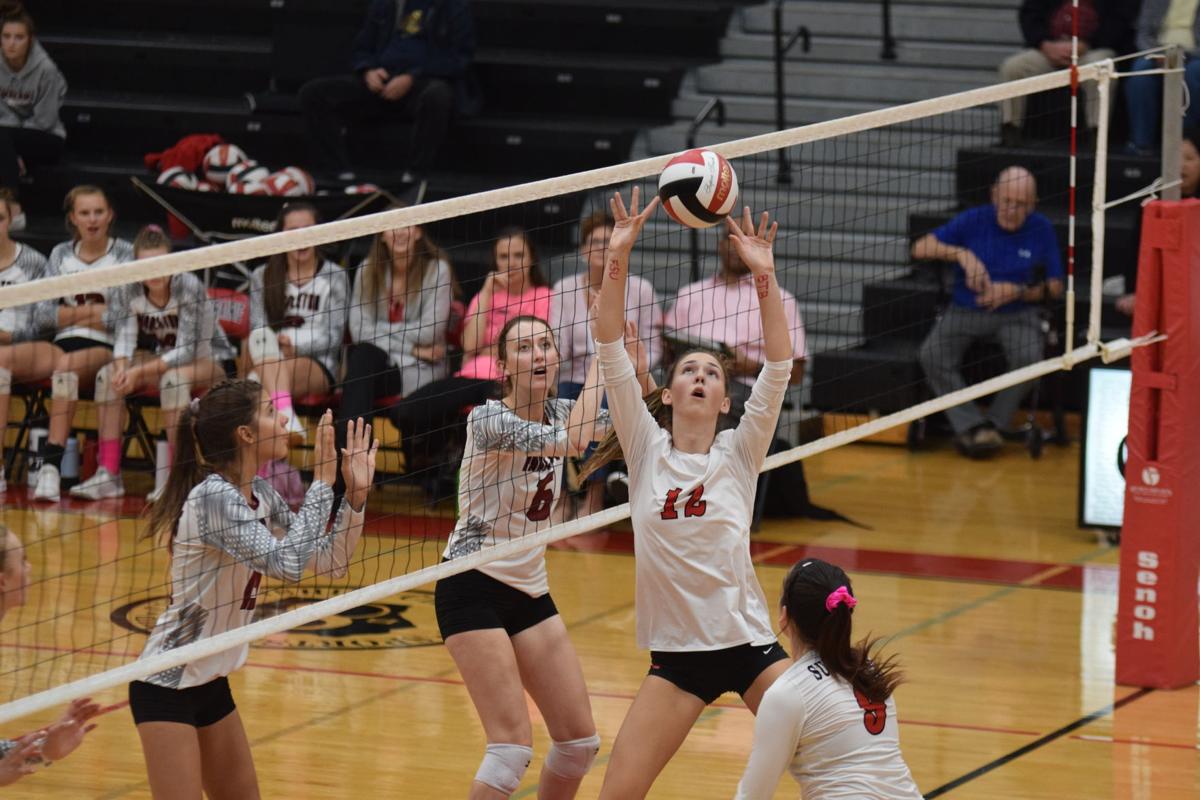 Prior to Thursday's match Sun Prairie senior outside hitter K.J. McNabb was presented a ball after recording her 1,000th career kill. McNabb and the Cardinals went on to beat Middleton, 3-0.

Prior to Thursday's match Sun Prairie senior outside hitter K.J. McNabb was presented a ball after recording her 1,000th career kill. McNabb and the Cardinals went on to beat Middleton, 3-0.

Serving has been a bit of an issue for the Sun Prairie volleyball team in recent weeks, but on Thursday the Cardinals’ serving proved to be key in a 3-0 Big Eight Conference sweep of Middleton at Sun Prairie Fieldhouse.

“That first set we missed four serves, and then we didn’t miss another one,” said Sun Prairie head coach T.J. Rantala. “It’s been a focus of ours since we lost a couple of big matches last week (in Neenah) where we missed some serves; you have to have that different attitude and go out there and get it.

“That’s something that creates momentum for the team, if you can get teams out of system and get a couple of aces here and there, we’re creating momentum for ourselves. I was pleased with that tonight,” Rantala added.

That serving was evident in the first set, helping SP build a 13-6 lead. An Emily Mickelson service ace ended a small Middleton run, and she and her teammates finished things off with a 25-15 decision.

“We work on serving every day in practice and a lot of times we’ll do it once we’re tired; we’ll condition before and then we’ll have to serve, because in a game when we’re tired that’s when serving is the most crucial,” said senior outside hitter K.J. McNabb, a Loyola-Chicago University commit. “It showed we’ve been working on it in the game.”

Middleton came back with some early momentum in the second set, taking an 11-6 lead. But Sun Prairie, behind junior Josie Halbleib’s setting that led to consecutive kills by McNabb, Maggie Allaman and Payton Addink, fueling a 6-0 run.

“Josie was spot-on tonight,” Rantala said of Halbleib, who finished with a match-high 29 assists. “She was really getting all of our hitters involved. She knew in the second set (Middleton) was camping out on K.J. and Payton a little bit more, so she was able to get our middles and right side involved.

Just like the first two sets the third set belonged to Sun Prairie, winning 25-17 to earn the 3-0 sweep.

Sun Prairie (30-7 overall, 7-1 Big Eight) remains one game back of Verona, which improved to 8-0 following a 3-0 victory over Beloit Memorial Thursday, with one game to play. The Cardinals host Madison West, while the Wildcats can win the title outright with a win at Madison East. Both Big Eight matches will be played Tuesday at 6:30 p.m.

Admittedly the sting of the Verona loss Oct. 26, a loss that left the Cardinals out of the top spot in the Big Eight and could stand in the way of the team’s fourth straight conference title.

“We know that we’re going to probably see them next week at the conference tournament and we’re going to see them in the playoffs; we know it’s coming and you’ve got to be hungry,” said Rantala. “It’s a different attitude, we’re considered the underdog.”

“I think it’s still in the back of our minds so we won’t let it happen again,” added McNabb of the Verona loss. “That wasn’t our best game, so now it’s something we’re going to have to work harder for.”

Mickelson had seven digs, while Halbleib finished the night with two blocks.

Prior to Thursday’s game McNabb was honored and presented a ball for recording her 1,000th-career kill, which she accomplished the previous weekend in the Neenah Invitational.

“That was a big goal of mine, it’s a big number and it motivates me,” said McNabb.

“It’s a great accomplishment and something definitely to be proud of,” said Rantala.