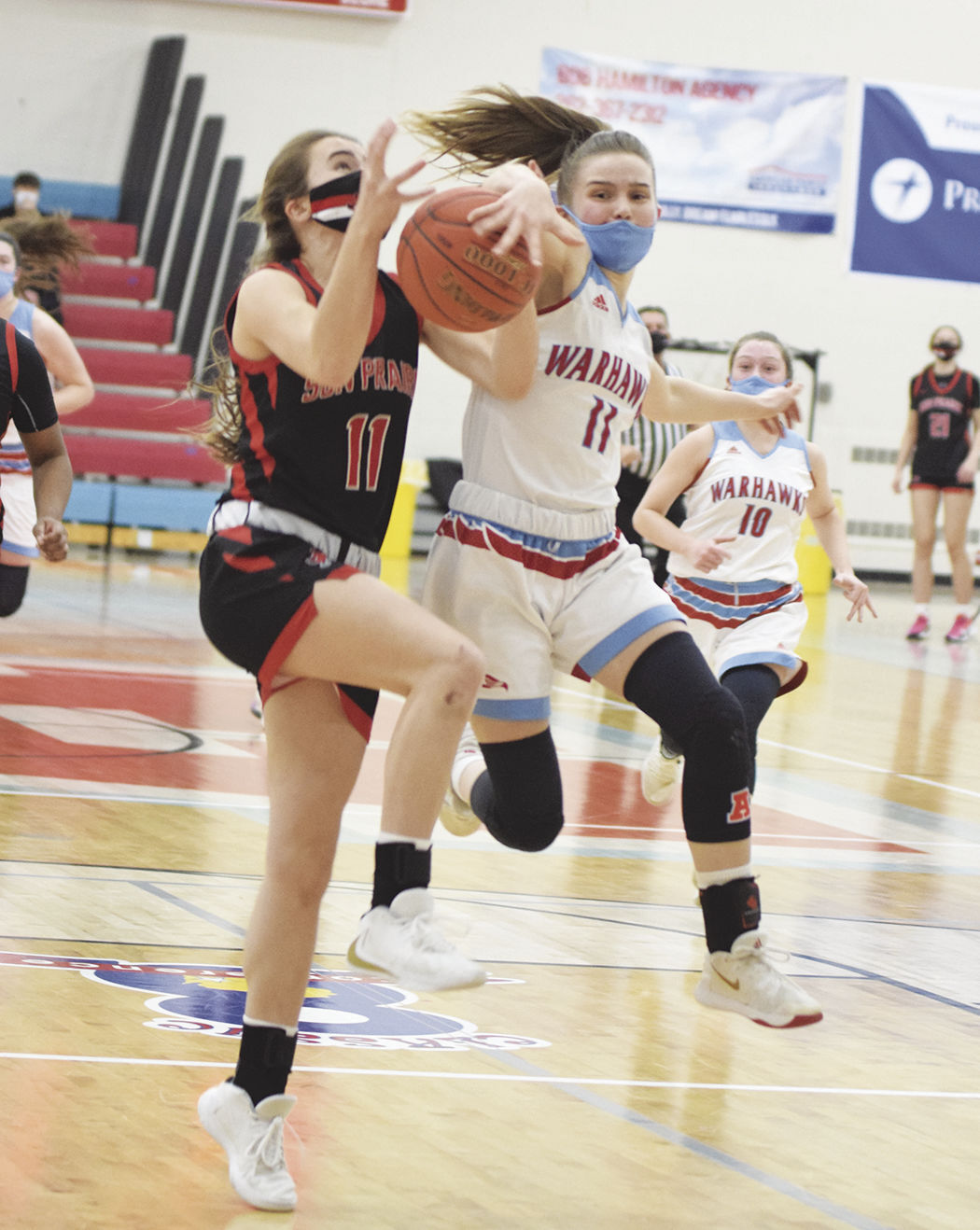 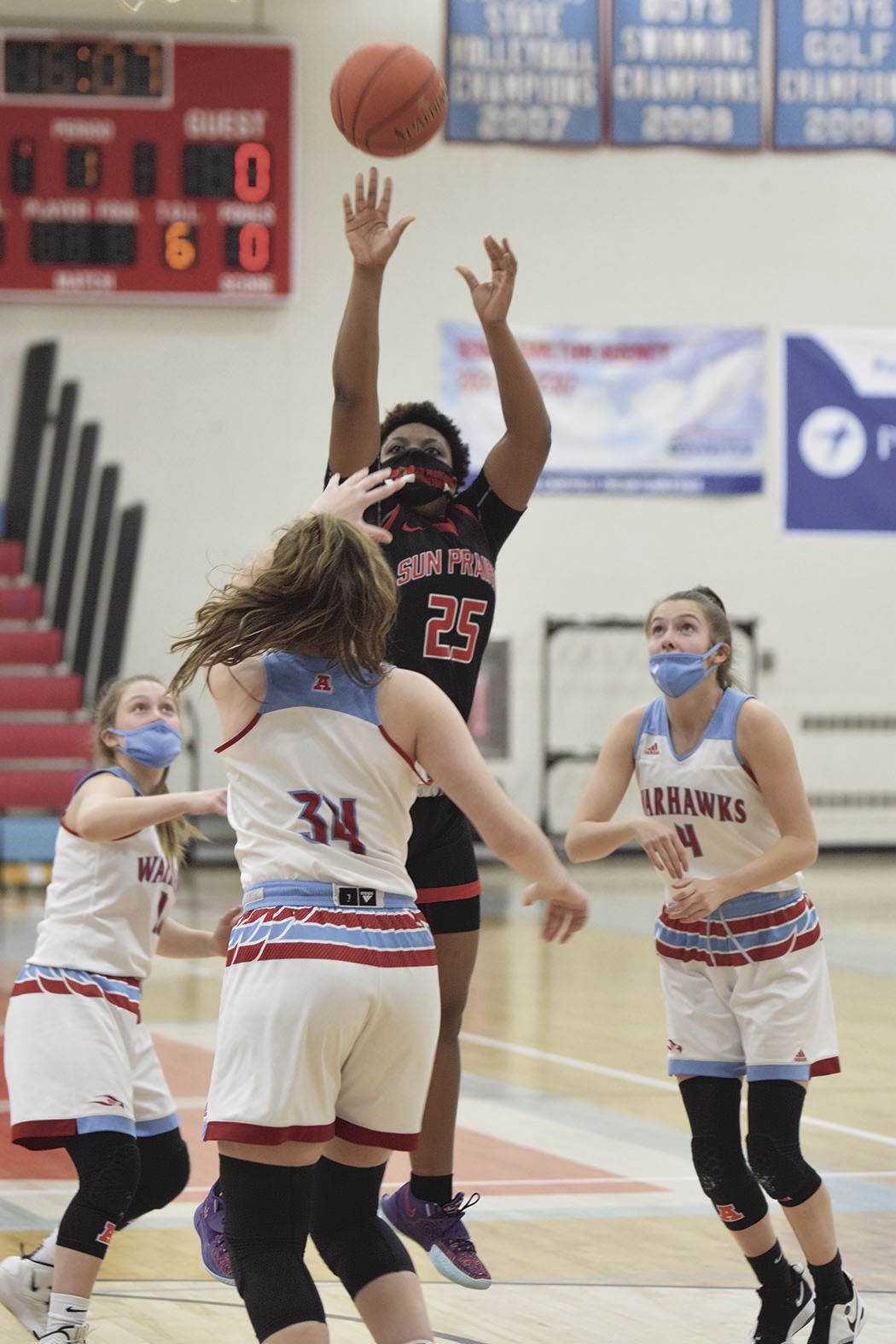 Antionique Auston scored a game-high 18 points but they weren’t enough in Sun Prairie’s 54-35 loss to Hartland Arrowhead in a WIAA Division 1 sectional semifinal on Thursday.

Antionique Auston scored a game-high 18 points but they weren’t enough in Sun Prairie’s 54-35 loss to Hartland Arrowhead in a WIAA Division 1 sectional semifinal on Thursday.

The fourth-seeded Cardinals (4-5) made just five baskets the entire second half — 12 total — and just five days after limiting Janesville Craig to a season low, were held to their fewest points in what proved to be their season-ending defeat.

“We had shots, we had free throws and we had layups, we just didn’t gather ourselves to get control,” said Sun Prairie head coach John Olson. “We had our opportunities.”

The top-seeded Warhawks (21-5) used a 2-3 zone defense to limit the Cardinals’ ability to drive to the basket, while their outside shooting wasn’t quite up to par.

“It’s a given when teams play Sun Prairie they zone us,” Olson said. “We’ve got the speed and quickness to attack, but if you don’t draw them out by shooting, it becomes a struggle. They’re a tough team.”

Arrowhead led 26-19 at the half and upped that lead to 10 when junior guard Anna Jenson buried a 3-pointer to begin the second-half scoring. It would be the last points the Warhawks would score for the next 7 minutes 6 seconds.

Meanwhile, Sun Prairie cut that deficit in half as sophomore guard Antionique Auston, who led all scorers with 18, scored three straight before senior wing Jazzanay Seymore connected on a layup.

But never during the drought did the Warhawks lose the lead. Alaina Harper, Arrowhead’s 6-foot-2 post player, ended the scoring lapse with a three-point play at the 9:31 mark, and four free throws pushed the lead back to 35-24.

Olson commented on the strange season, one that saw the Public Health of Madison and Dane County limit practice numbers for most of the season, while the Sun Prairie Area School District did not allow any of its teams in-game competition until Jan. 23.

“We were limited in some of the things we were able to do in practices — no rebound drills, no zig-zag drills — I told the girls that’s pretty hard because what are practices for? Practices make you better, and if your practices are limited as opposed to your opponent, it’s not an excuse but it’s not the same,” he remarked.

“I thank the seniors because they’re a great group of kids. They’ve never given me trouble and you appreciate that as a coach; it’s hard on them but it’s also hard on a coach because you wish you had a different ending for them,” said Olson. “I told them to take the positives; take that Janesville Craig game, take the (regional championship) plaque and remember that you went out with some class.”

Phoebe Frentzal and Harper paced the Warhawks with 14 and 12 points, respectively.