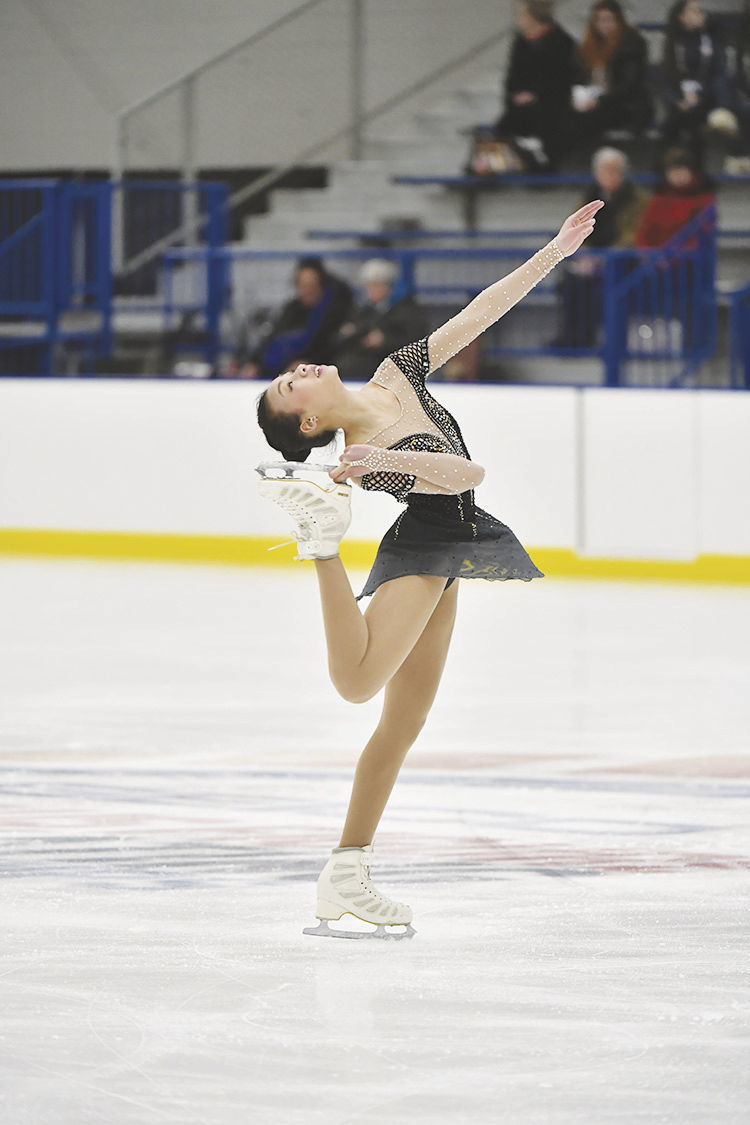 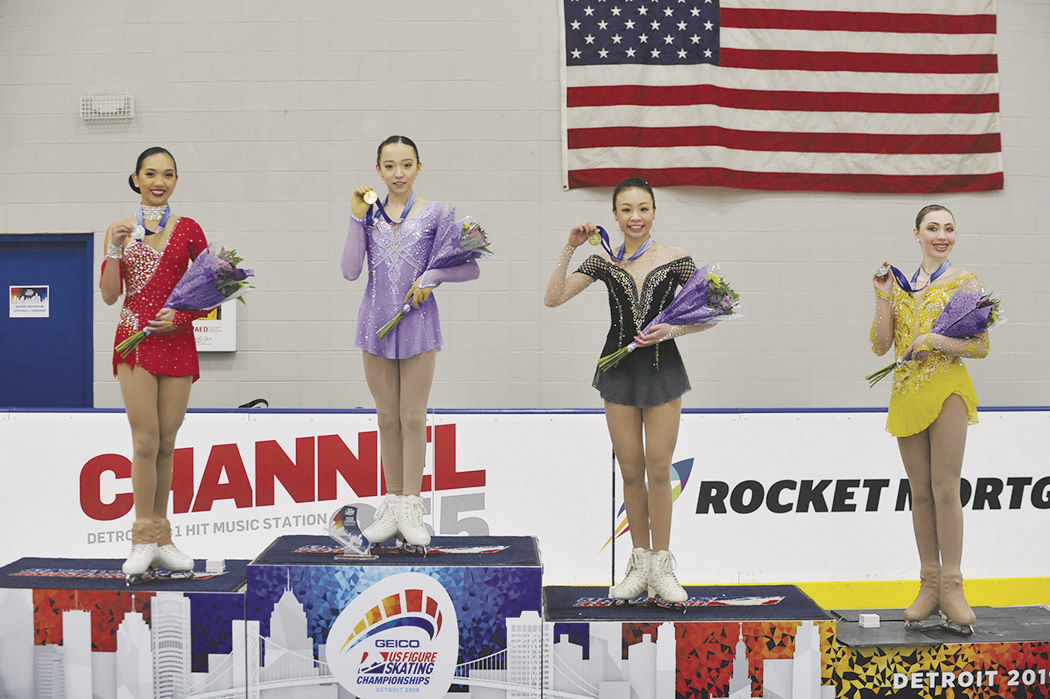 Sun Prairie’s Isabelle Inthisone (middle) stands on the podium after a recent win. Inthisone, 14, qualified for the U.S. Figure Skating Nationals during a Jan. 21-22 competition in Detroit.

Sun Prairie’s Isabelle Inthisone (middle) stands on the podium after a recent win. Inthisone, 14, qualified for the U.S. Figure Skating Nationals during a Jan. 21-22 competition in Detroit.

Standing on the podium, the big smile on Isabelle Inthisone’s face spoke volumes.

It’s a place one year earlier that Inthisone didn’t know if she’d be able to climb. But hard work and dedication certainly equated to success.

After being injured prior to the U.S. Figure Skating Nationals in 2018, Inthisone — who is a freshman in the Sun Prairie School District — qualified for nationals this year in the novice ladies discipline at Little Caesars Arena in Detroit on Jan. 21 and 22. The 14-year-old was cool and calm under pressure, placing third in her short program and following that up with third the next day in free skate. Inthisone’s point totals from the two competitions were good enough to land her the bronze medal.

When the results were announced, Inthisone was ecstatic when she heard her top-three finish.

“I was thinking, ‘Wow, I got bronze, that is pretty cool,’” Inthisone said. “Just to make it to nationals is pretty amazing.”

Said Inthisone’s coach, Denise Myers: “She was just really excited. I’m happy that it went the way that it did.”

Myers isn’t surprised her pupil did so well at nationals. What the coach was a little surprised about is Inthisone’s rise in the sport after a right hip flexor injury forced her to miss the 2018 nationals.

“It’s been a steady progression – you can see her getting stronger and more confident, so you could see it as the season was going on,” Myers said. “She’s come a long way in a very short amount of time.”

Inthisone started skating at age 4 in Sun Prairie through a learn-to-skate program. Figure skating became big early in her life.

“My mom put me in figure skating and then I think ever since then I just really loved it and I always wanted to be in front of the class and be the best,” Inthisone said. “I also didn’t want to swim, which is the first sport (my parents) put me in.”

Two years ago, Inthisone’s family knew if she was going reach stardom, she needed top-notch coaching. Inthisone found a coach in Chicago and she and her mom traveled back and forth four hours roundtrip, six days a week for training. That lasted for 18 months before Inthisone’s injury occurred in January 2018. When Inthisone returned to the ice in late February, she realized the training environment didn’t fit her and asked her parents to seek a new coach, said her mom, Jessica Praxaya-Inthisone. That’s when Inthisone’s parents contacted Myers, who was happy to take on the young skater.

In April of last year, Inthisone started working with Myers, who coaches at DuPage FSC in Buffalo Grove, Ill. Inthisone’s family decided it was in the best interest of their daughter to stay close to the training facility during the week. Praxaya-Inthisone, who works in the pharmaceutical/bio tech industry, landed a job in the Chicago and she and her daughter have been living in an apartment in Buffalo Grove since July. The two head back to Sun Prairie on weekends to spend time with the rest of their family.

“We do have to consider now consolidating our family into one household because of this recent positive win for her,” Praxaya-Inthisone said. “We didn’t know where she would be at considering her injury last year.”

Inthisone’s schedule each week is hectic. She trains five days a week with Myers, skating four hours per day, and then either has a one-hour workout following practice or ballet or hip hop after skating. She also does pilates every Tuesday. On top of her training regimen, Inthisone takes classes through an online program with the Sun Prairie School District.

It’s a unique way of life and one Inthisone wouldn’t change one bit.

“I actually do really like this lifestyle because it’s an opportunity not a lot of teenagers get,” Inthisone said. “I’m really thankful for it.”

Inthisone has had a lot of help along the way to make her a good figure skater.

“Her dedication, her work ethic — she has a great support system with her parents,” Myers said. “It takes a village. She has a great team of coaches she works with that care about her.”

Myers said Inthisone is extremely motivated, too. She has natural talent on the ice, but raw ability can only take a skater so far.

Inthisone’s hard work helped her reach her goal of making it to nationals. There were plenty of obstacles she had to jump before getting to the big state. Inthisone placed first in novice ladies at an eight-state U.S. Figure Skating Upper Great Lakes Regional held in October in Peoria, Ill. She then placed second in the Midwestern Sectional in October in Fort Wayne, Ind., to qualify for nationals. When it was all said and done, just 12 of about 270 novice ladies in the United States advanced to nationals.

On the first day of novice ladies competition at nationals, Inthisone had a score of 52.21 in her short program. Sitting in third place entering Day 2, Inthisone kept positive thoughts that she could have another strong performance.

“I was thinking there’s still the long program and be confident and just put yourself on autopilot and do what you do every single day,” Inthisone said.

In the free skate/long program on Jan. 22, Inthisone tallied a score of 95.95. With a total two-day score of 148.16, which is her personal best, Inthisone was just 1.17 points shy of nabbing silver.

Things could have gone south if Inthisone wouldn’t have been able to save her long program routine.

“Isabelle missed the triple salchow on her double axel jump so she was quick thinking and added it on a triple toe, making it a 3 toe- euler- 3 salchow combo – a jump that is difficult in technicality and something she’s never practiced,” Praxaya-Inthisone said.

“She was quick on her feet to be able to add another element to get her extra points,” Myers said. “That’s really good thinking on her feet.”

Getting a chance to compete at nationals was valuable for Inthisone’s figure skating career.

“It was a great experience and another opportunity to showcase what I really worked for all season,” Inthisone said.

But competing at nationals and medaling isn’t Inthisone’s ultimate goal. No, she has extremely high aspirations. Inthisone wants to be a member of Team USA and make it to the 2022 Olympic Games in Beijing, China.

“That would be amazing,” Inthisone said. “That would mean the world to me.”