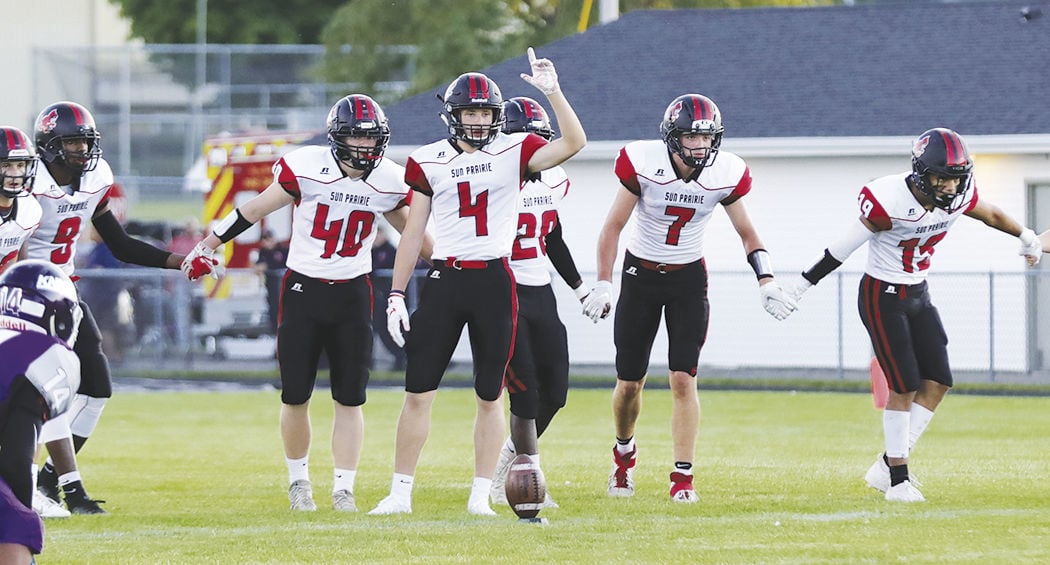 Sun Prairie senior-to-be Owen Konopacki (4) made his announcement last week to attend the Air Force Academy. The first-team All-Big Eight and honorable mention All-State kicker had 88% of his kickoffs go for touchbacks in 2019. 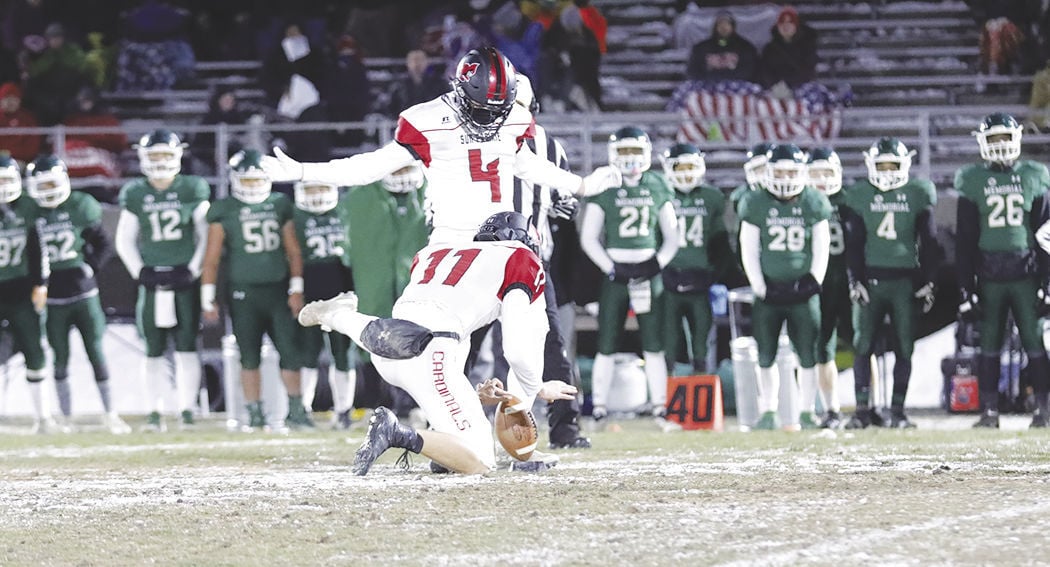 Owen Konopacki made this 44-yard field goal in less-than-favorable conditions during last season’s WIAA Division 1 quarterfinal game against Madison Memorial. It was a career-long. 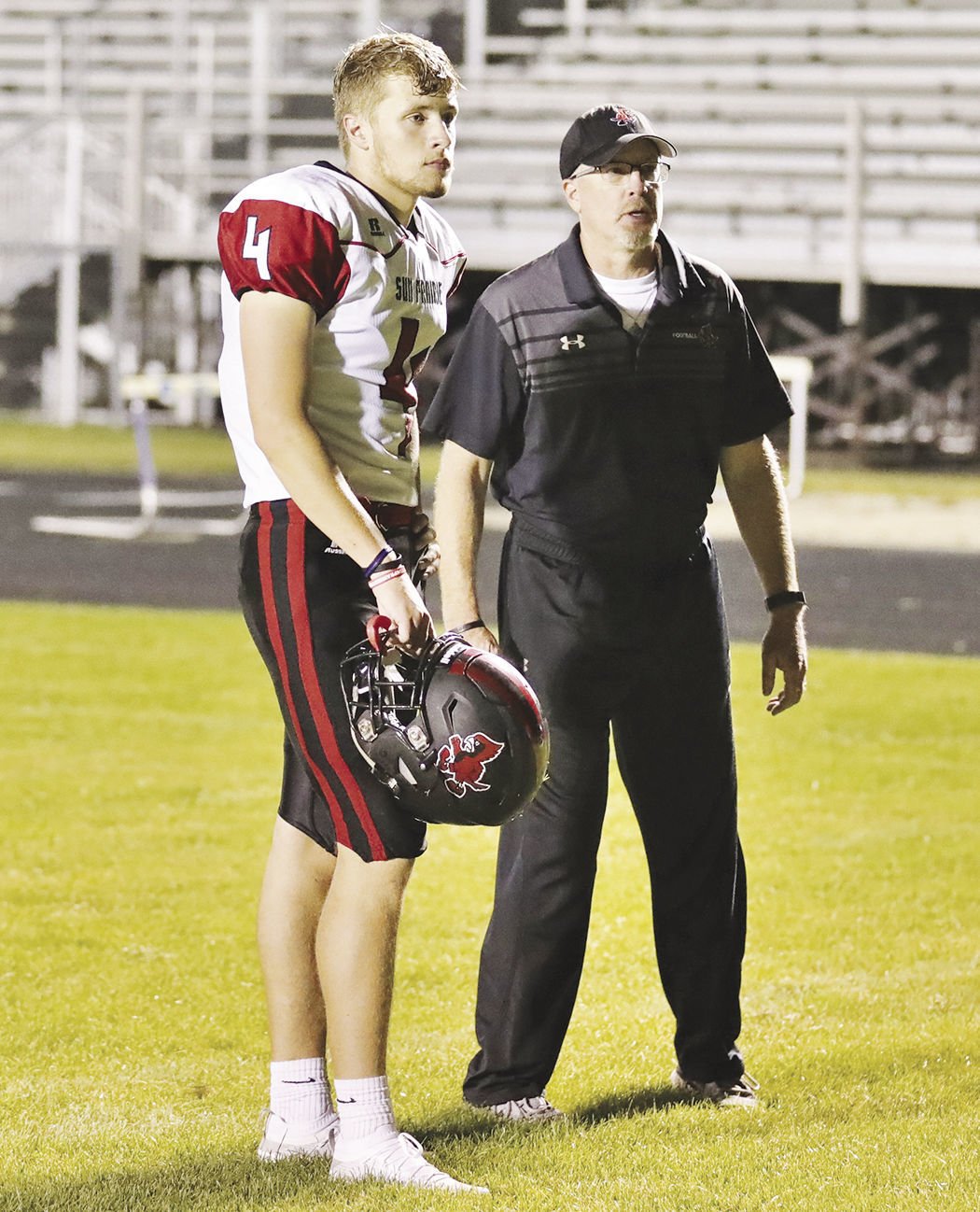 Kevin Konopacki (right) has coached kickers at Sun Prairie since 2010. Since then the Cardinals have had an All-Big Eight Conference kicker — the last seven being first-team selections — including his son, Owen (left) in 2019.

Sun Prairie senior-to-be Owen Konopacki (4) made his announcement last week to attend the Air Force Academy. The first-team All-Big Eight and honorable mention All-State kicker had 88% of his kickoffs go for touchbacks in 2019.

Owen Konopacki made this 44-yard field goal in less-than-favorable conditions during last season’s WIAA Division 1 quarterfinal game against Madison Memorial. It was a career-long.

Kevin Konopacki (right) has coached kickers at Sun Prairie since 2010. Since then the Cardinals have had an All-Big Eight Conference kicker — the last seven being first-team selections — including his son, Owen (left) in 2019.

Owen Konopacki realized not one, but two dreams when he made his official announcement on Twitter. A highly-touted kicker, the Sun Prairie senior-to-be committed to the Air Force Academy where he will also play football for the Fighting Falcons in Colorado Springs.

“I’ve always dreamed about serving my country,” said Konopacki. “It’s always been a dream of mine to go there, they have the engineering degree that I want and it gives me a chance to fly.”

A few years ago a trip to Wittman Airport in Oshkosh and the EAA AirVenture Air Show peaked Konopacki’s interest.

“I saw the planes flying around and just fell in love with them right then and there,” he said.

The 6-foot-3, 190-pounder is the latest in a long line of talented placekickers that have put on the Cardinals uniform. Last fall he became the ninth straight Sun Prairie kicker to receive All-Big Eight Conference honors, and the seventh in a row to earn first-team honors. The previous seven all-league kickers were Dustin Wunderlin (2013), Colby Oswalt (2014), Alex Oakley (2015-17) and Connor Shanahan.

And all of the aforementioned placekickers have one thing in common — they were all coached by Kevin Konopacki — who just happens to be Owen’s father.

“We’ve been fortunate to have some great kickers come through our program, and a lot of that is due to Coach Konopacki,” said Sun Prairie football head coach Brian Kaminski. “I’ll be honest, all I have to say is ‘kick the ball’ because Coach Konopacki already has them ready to go. We’ve had a great run of success with these kids, and Owen’s just the next in line.”

In 2019, Konopacki’s kickoffs resulted in touchbacks 88% of the time.

Kaminski made reference to Konopacki’s importance as a kicker in last season’s WIAA Division 1 playoff-opening game against Verona, when his machine gun of a leg produced touchback after touchback, not allowing return specialist and University of Wisconsin recruit Jackson Acker many opportunities to touch the football.

“We said we were going to kick it into the end zone and we weren’t going to allow him to return it, and he did that; that just neutralized them. Anytime you can make a team go 80 yards on an ensuing possession or flip the field on a punt, it’s awesome,” he said.

Konopacki doubles as the team’s punter. He averaged 39.8 yards on 36 kicks, landing 11 balls inside the opponents’ 20-yard line and had just one touchback.

Entering his sophomore season Konopacki and Shanahan were neck-and-neck as to who would replace Oakley, the program’s only three-time All-Big Eight kicker. But a broken collarbone sidelined Konopacki for most of the season, and Shanahan assumed the role where he went on to help the Cardinals earn a share of their third straight Big Eight title.

Konopacki was limited to kickoffs later in 2018, while he made his lone extra point in a 56-8 win over Madison East.

With Shanahan graduating, the job was all Konopacki’s in 2019, and he seized the moment, making 40-of-42 extra points while connecting on 5-of-10 field goals. But there was one field goal that stood out above all others, and it occurred in easily the worst field conditions he and the Cardinals faced all season.

Sun Prairie faced Big Eight champion Madison Memorial in a Division 1 quarterfinal on a snow-and-ice-covered Mansfield Stadium field. Not deterred, Konopacki lined up and connected on a 44-yard field goal — the longest of his career — giving the Cardinals a 3-0 lead.

“With the field conditions as they were it was like kicking on concrete,” recalled Konopacki. “I had little hope it was going in, but I gave it my all and I was fortunate enough to get it.”

While Sun Prairie’s season ended in a 28-17 loss, Konopacki finished the year earning not only first-team All-Big Eight honors, but he was recognized as on the 2019 Wisconsin Football Coaches Association All-State Large Schools honorable mention team.

Konopacki is also a terrific student, carrying a 3.92 GPA.

Kicking is part of the Konopacki lineage. Kevin Konopacki was UW-Platteville’s placekicker from 1989-91 where he played for legendary Division III coach George Chryst, the father of current Wisconsin Badgers head coach Paul Chryst.

Konopacki joined the Sun Prairie Police Department in 2004 and in 2012 was promoted from Seargent to Lieutenant, where he currently serves today.

He joined the Sun Prairie coaching staff in 2010 as a volunteer assistant.

“I approached Brian Kaminski and said I was a former college kicker and I would love to volunteer and coach the kickers,” said Kevin Konopacki. “I never had a kicking coach (in high school) and he said it would be a great idea, and I’ve been there ever since.”

“He had me start (kicking) when I was very young; I remember kicking for our fourth-grade team,” recalled Owen.

Like all his teammates Konopacki drives by the new Bank of Sun Prairie at Ashley Field site to see the future home of the Cardinals, scheduled to be completed by the first game of the 2020 season on Aug. 21 against Hudson.

And like his teammates, he’s hoping there is a 2020 season, as it remains in the balance due to COVID-19.

“I’m looking forward to hopefully getting a season; even if there’s a couple of restrictions, I’m OK with that. I’m just excited to get out and put on the pads and have some fun,” Konopacki concluded.

“I’ve always dreamed about serving my country. It’s always been a dream of mine to go there, they have the engineering degree that I want and it gives me a chance to fly."

About his commitment to the Air Force Academy