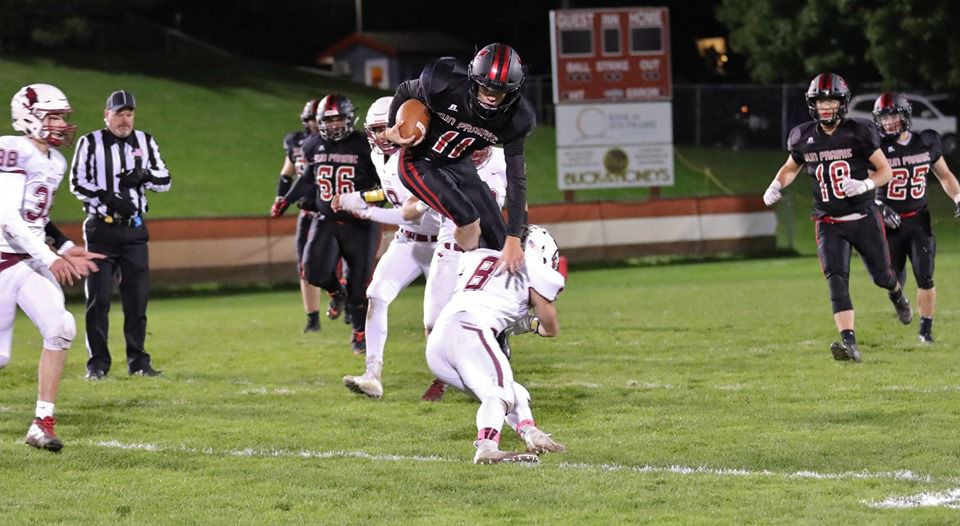 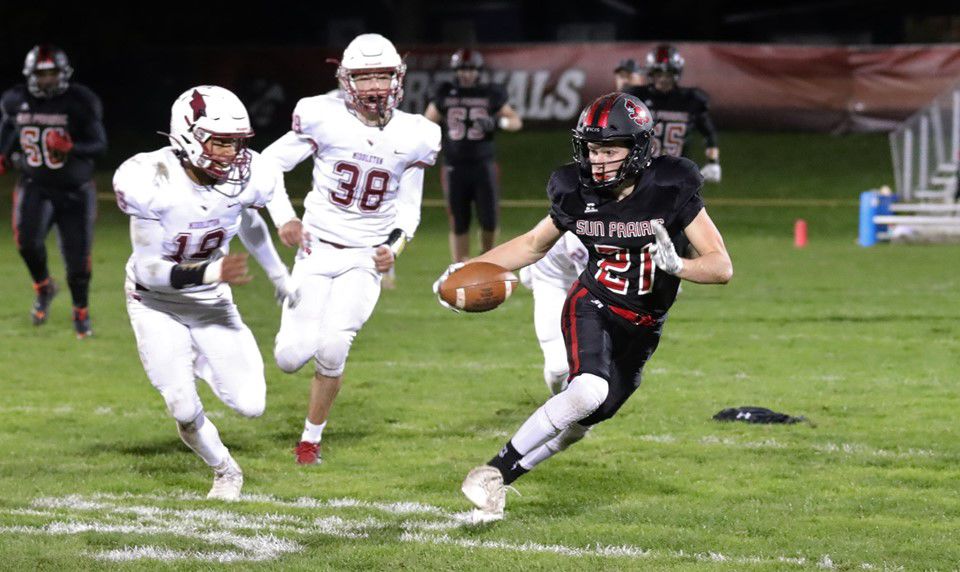 Colin Schaefer caught seven passes for 78 yards and one touchdown. 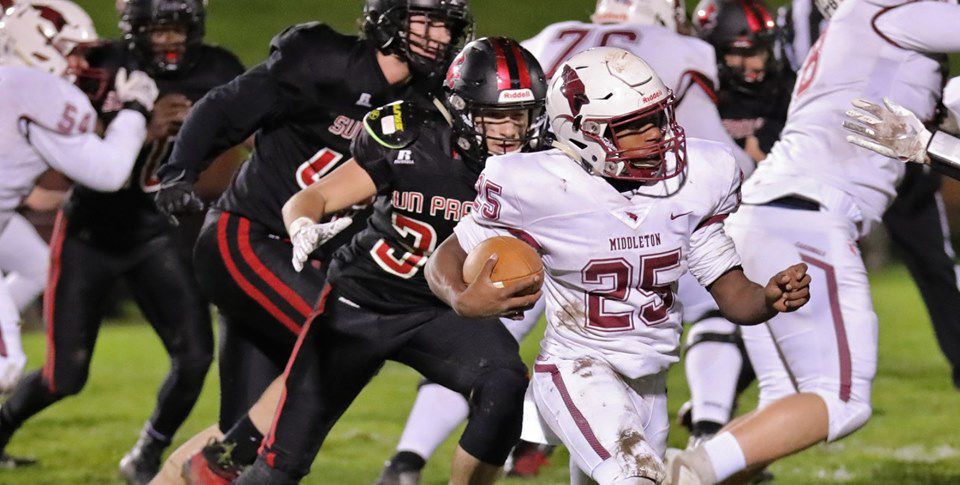 Kallion Buckner rushed for 247 yards and two touchdowns, of 80 and 91 yards, leading Middleton over Sun Prairie, 35-19.

Colin Schaefer caught seven passes for 78 yards and one touchdown.

Kallion Buckner rushed for 247 yards and two touchdowns, of 80 and 91 yards, leading Middleton over Sun Prairie, 35-19.

Kallion Buckner, along with an early fourth-quarter fumble, changed the dynamic of Sun Prairie’s football game with yearly rival Middleton leading to a 35-19 Homecoming night loss at Ashley Field Friday.

Buckner, the Big Eight’s leading rusher, scored on runs of 80 and 91 yards and finished with a career-high 247 as the visiting Cardinals improved to 6-2 to remain in second place, while the host Cardinals fell to 5-3.

“Those were two big plays,” Sun Prairie head coach Brian Kaminski said. “Buckner’s pretty good, but we also had some assignment miscues. Give them credit, their offensive line opened him some holes,”

Trailing 14-13 and inside the Middleton 5-yard line as the third quarter ended, Sun Prairie was on the doorstep of taking the lead. But on the first play of the fourth quarter quarterback Brady Stevens was hit by Middleton linebacker Jake Pavelski and fumbled. Brian Frusciante recovered it at the 7.

Two plays later, Buckner broke loose and darted up the Sun Prairie sideline. While being pursued by two defenders, Buckner made a remarkable cutback around the 40-yard line and raced untouched for a 91-yard touchdown.

“We were going in to score, we don’t get it done and then two plays later he goes for a long touchdown. That one really hurt,” said Kaminski. “We felt like we left some opportunities out on the field tonight.”

“We knew going in they were going to be big up front,” said Kaminski. “A lot of penalties and too many sacks is what it really came down to.”

Middleton drew first blood, but in an unlikely way. As quarterback Drew Teff dove for the goal line he fumbled the football into the end zone which was recovered by senior offensive lineman Billy Johnson. Sawyer Pertzborn split the uprights with the extra point for a 7-0 lead at the 6 minute, 33 second mark of the opening quarter.

Two second-quarter touchdowns gave Sun Prairie a 13-7 halftime advantage. The first came on a flea flicker as Stevens handed off to Schauer who handed off to Colin Schaefer who gave the ball back to Stevens as he hit junior Peyton Jenkins in stride for a 43-yard touchdown. The 2-point conversion failed, however, as SP trailed 7-6.

“Give coach (Chad) Kavanaugh all the credit on that, it was a good play design and we pulled it off at the right time,” Kaminski said.

Sun Prairie took the lead just 10 seconds later. After senior co-captain Dominic Backes recovered a Buckner fumble at the Middleton 12, Stevens hit Schaefer right in the numbers in the near the right pylon. Owen Konopacki’s extra point gave SP a 13-7 lead with 9:39 remaining in the first half.

Middleton received the second-half kickoff and after Konopacki delivered a touchback on the kick, Buckner needed just one play to burst up the middle and take it 80 yards for a touchdown and 14-13 lead, one the Cardinals would not relinquish.

Sun Prairie used a four-play, 62-yard drive, which senior co-captain Dominick Landphier capped off with a leaping touchdown grab from Stevens with 9:57 to go. But Stevens missed his target on the 2-point conversion, leaving the Cardinals in a 21-19 deficit.

Keewon Buford added fourth-quarter scoring runs of 9 and 20 yards as Middleton pulled away.

Stevens completed 18-of-27 passes for 196 yards while his three TD passes raised his Big Eight-leading total to 23.

Senior linebacker Brendan Shannon recorded a season-high 10 tackles, including one tackle for a loss.

“We’re going to get back to work and try and right the ship against Madison West and then give it hell in the playoffs,” said Kamiski.