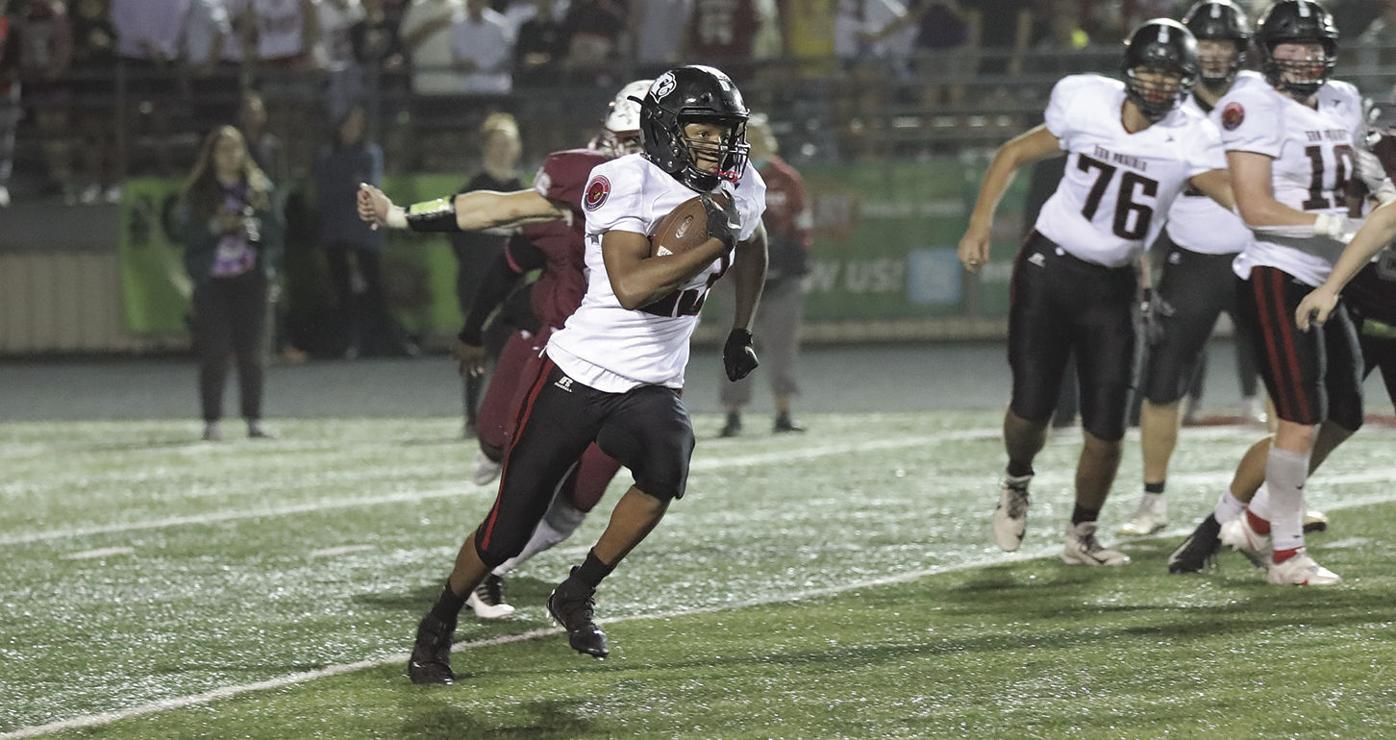 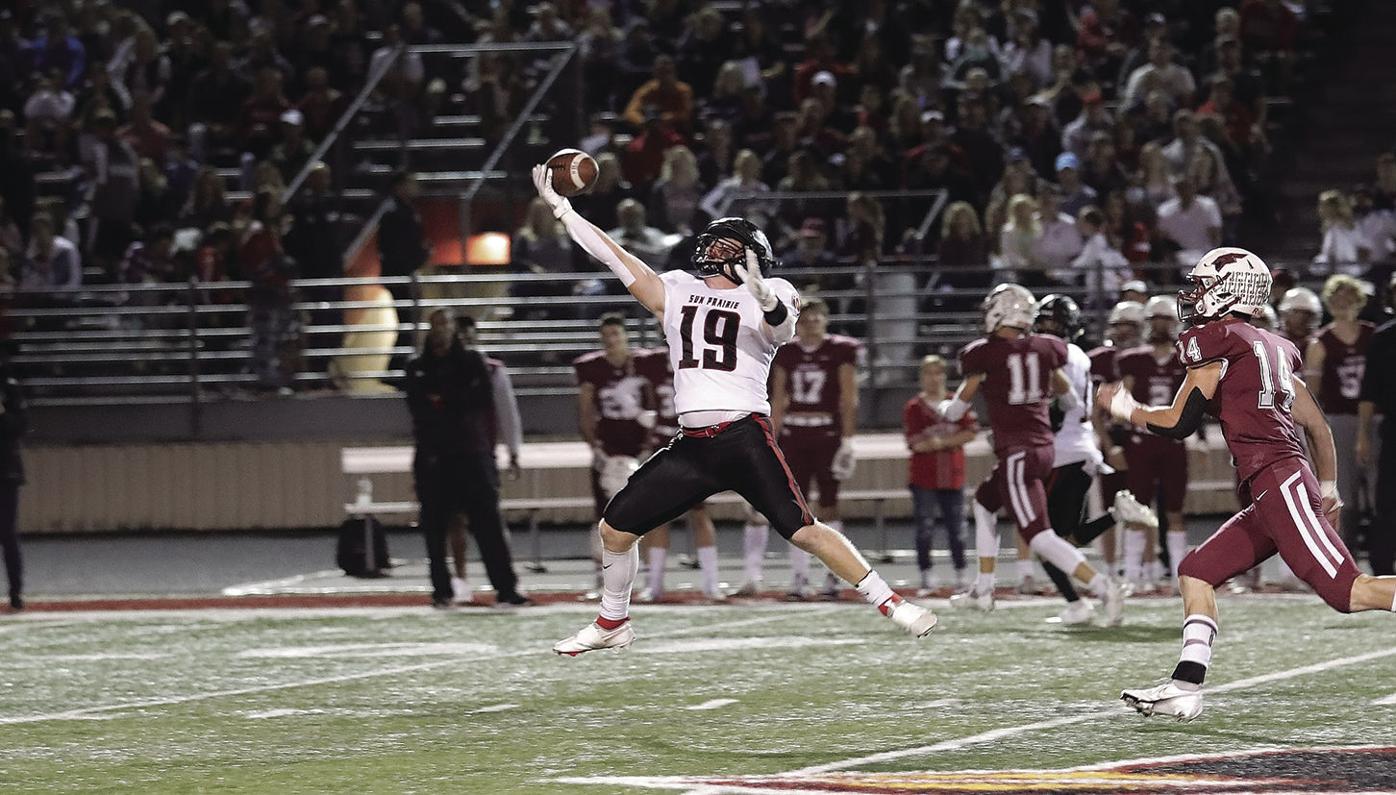 Excluding the shortened alternate spring season where not all Big Eight conference schools participated, Sun Prairie hasn’t gone undefeated in conference play since 2017. It looks as though that short-lived streak will end this season as the Cardinals have now passed their greatest test. Sun Prairie outlasted Middleton, 26-21, on Friday, Oct. 8 to move to 9-0 on the season and 6-0 in conference play.

Up until the inevitable date with Middleton, Sun Prairie had coasted through the Big Eight. It was winning by huge margins against largely outmatched opponents. Early on Friday, it was clear that the cakewalk was over.

Middleton struck first. Sophomore quarterback Gabe Passini fired a pass to a wide open Cole Toennies up the right sideline which he took in for a long 61-yard score. With the extra point, Sun Prairie faced its largest deficit of the season at seven points. The lead didn’t last long.

Sun Prairie junior quarterback Jerry Kaminski was a calming hand, as he has been all season. He orchestrated a drive down the field, picking up yardage with both his arm and his legs. On the eight yard line, senior receiver Addison Ostrenga bullied his way inside on a jam attempt from the Middleton corner and found himself wide open in the endzone. Kaminski fired a dart right into the breadbasket, tying the game at 7 as the first quarter neared its end.

A forced punt later, it looked like Sun Prairie would kick off another long drive to take the lead back. A fumble ruined those plans. The ball teetered around the field and found its ways into the hands of Middleton’s Blake Van Buren. He sprinted untouched into the endzone from 10 yards away, giving the lead right back to Middleton, 14-7.

Sun Prairie needed an answer. Luckily, the ground game was working well. Specifically, Cortez LeGrant was working well. He was pounding the rock all game and was an invaluable part of the offensive gameplan. He punched in a run from five yards out just before halftime to tie the game at 14.

The drama was only beginning. To kick off the third quarter, Sun Prairie took the lead for the first time in the game. Kaminski found sophomore Connor Stauff for a 6-yard score, but the extra point was missed. A 20-14 lead left Sun Prairie in a position to be easily overtaken if the defense let another touchdown slip.

However, as it has been all season, the defense was clutch when it was needed. It bought the offense some time as it shut down multiple Middleton drives. The offense couldn’t produce the necessary insurance score. So, the defense took it into its own hands.

Midway through the fourth quarter, Passini didn’t see senior linebacker Davis Hamilton dropping into coverage. Hamilton went up and snagged an interception, using his skills as a receiver to weave through Middleton players to score from 37 yards out. Sun Prairie went for the 2-point conversion for maximum insurance, but it failed. Still, Sun Prairie had the insurance it needed, a 26-14 lead with time winding down.

There was no quit in Middleton. Passini rebounded from the pick and put together a solid drive. He fired off a 21-yard score Toennies to narrow the deficit to 26-21. The comeback attempt was not to be, however, as there simply wasn’t time. Sun Prairie held on for the win.

Kaminski completed 10 of his 19 passing attempts for 153 yards and two scores on the day. LeGrant led the way in rushing with 150 yards on 18 attempts. Hamilton was the biggest receiver on the day, turning five receptions into 97 yards.

Sun Prairie’s defense deserves plenty of credit for its shutdown mentality in the run game. Middleton felt the absence of senior running back Elijah Gray, who was not allowed to play after being ejected from the previous week’s game. Sophomore Bryce Falk couldn’t pick up the slack, gaining just 65 yards on 18 attempts. It was a dominant performance from the Sun Prairie front seven.

The Big Eight crown is well within reach for Sun Prairie, but it’s not clinched yet. There’s one game left to play.

Friday, Oct. 15, Sun Prairie travels to Verona. The Wildcats sit at 3rd place in the Big Eight with a 4-2 conference record. Verona looked impressive against some of the lesser teams in the conference but suffered big losses to Madison Memorial and Middleton, two teams Sun Prairie has handled this season.

The Wildcats will come into the game well-rested as they did not play Friday. Madison East cancelled and they were not able to find a replacement game.

A win on Friday would secure an outright Big Eight crown for Sun Prairie and an undefeated regular season.