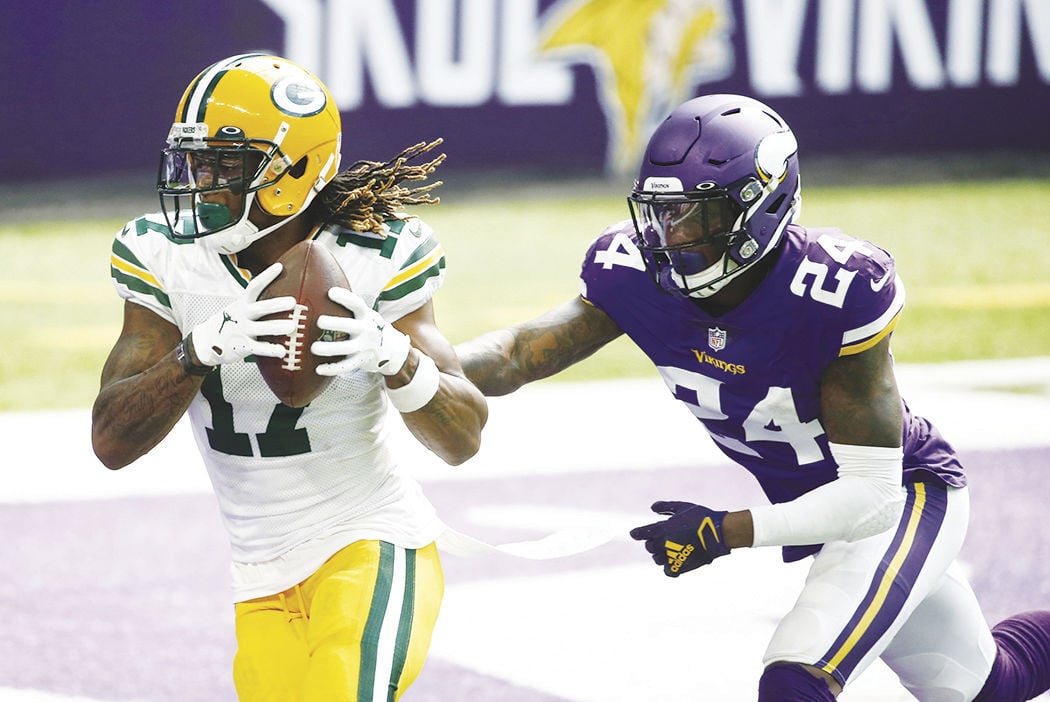 Green Bay Packers wide receiver Davante Adams catches a 1-yard touchdown pass ahead of Minnesota Vikings defensive back Holton Hill, right, during the second half of an NFL football game, Sunday in Minneapolis. 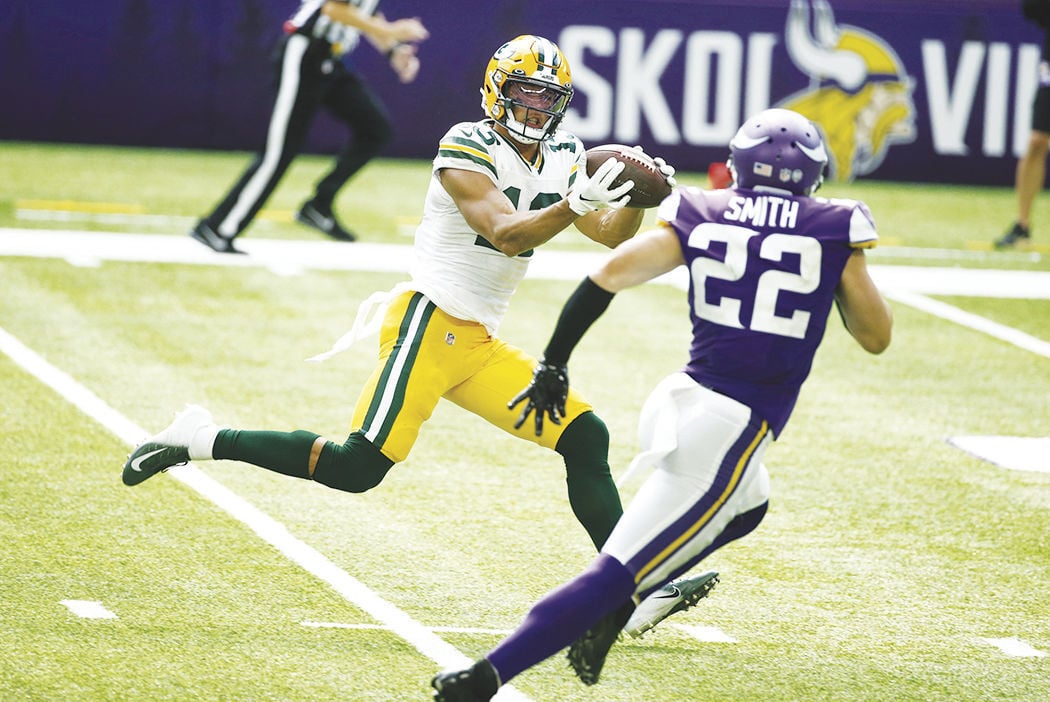 Green Bay Packers wide receiver Davante Adams catches a 1-yard touchdown pass ahead of Minnesota Vikings defensive back Holton Hill, right, during the second half of an NFL football game, Sunday in Minneapolis.

MINNEAPOLIS — After Green Bay won last season at Minnesota to clinch the division, Aaron Rodgers paused to take a video of some jubilant Packers fans still lingering in the stadium as he walked to the bus.

This victory over the Vikings was just as memorable, albeit barely audible.

Rodgers took full advantage of the young cornerbacks and the empty building in Minnesota, beginning his 13th season as Green Bay’s starting quarterback by passing for 364 yards and four touchdowns to lead the Packers past the Vikings 43-34 on Sunday.

“It was one of the strangest experiences I’ve had in the NFL, being in a stadium like this to have memories of some really rocking times,” said Rodgers, who threw for only three scores over his first four visits to U.S. Bank Stadium.

Davante Adams thrived all over the field with a franchise-record-tying 14 catches for 156 yards and two touchdowns. Marquez Valdes-Scantling and Allen Lazard each reached the end zone, too, as Green Bay had its way with a Minnesota defense renovated this year out of salary-cap necessity as hefty new contracts were given to quarterback Kirk Cousins and running back Dalvin Cook.

“It was just locking in and tapping into getting ready to play here in front of zero thousand fans,” said Adams, who tied Don Hutson’s mark from Nov. 22, 1942.

Aaron Jones rushed for 66 yards and a touchdown for the Packers, who posted their highest score against the Vikings since a 44-31 victory at the Metrodome on Oct. 27, 2013. This was the most points Minnesota has allowed since coach Mike Zimmer was hired in 2014.

Cook rushed 12 times for 50 yards, two touchdowns and two 2-point conversions. Adam Thielen caught six passes for 110 yards, two scores and another 2-pointer, but Cousins underthrew him in the final minute of the first half. Jaire Alexander, who also recorded a safety on an untouched cornerback blitz in the second quarter, made the bobbling interception.

Then Rodgers hit Valdes-Scantling on a fade route up the right sideline with rookie Cameron Dantzler in position but too late to turn for the ball, a 45-yard touchdown that gave Green Bay a 22-7 lead with 11 seconds left in the first half.

Surprised by his team’s decision to draft quarterback Jordan Love in the first round, the 36-year-old Rodgers made it clear he’s nowhere close to being done. He completed 32 of 44 passes, and several incompletions were throwaways when nobody was open.

Mike Hughes and Holton Hill were the top two cornerbacks for Minnesota, with the third-round draft pick Dantzler seeing plenty of action in a trio all age 23 or younger. Xavier Rhodes, Trae Waynes and Mackensie Alexander all departed during the offseason.

What didn’t help the coverage was the absence of a pass rush, with two-time Pro Bowl defensive end Danielle Hunter on the mend with a reported neck injury and stalwart Everson Griffen now with Dallas after 10 seasons with the team. Newcomer Yannick Ngakoue was a nonfactor.

Ifaedi Odenigbo was the only one who even came close to disrupting a throw by Rodgers, who was sacked 12 times in the previous three full games he played at U.S. Bank Stadium. This was the first full game he played anywhere in Minnesota without being sacked.

Late in the third quarter, on third-and-5, without the usual jet-engine-level din to distract the offense, Rodgers saw Anthony Barr jump offside and pounced on the free play, hitting Valdes-Scantling for 39 yards to the 2, with Hughes defending.

“Just a different atmosphere,” Rodgers said. “This is a really tough place to play with the noise.”

There may be no game in this building stranger than this one, one of the NFL’s strongest rivalries staged without the always lively atmosphere created by these border-state fan bases. No fans were admitted because of the COVID-19 pandemic.

The echoes of referee whistles and coach and teammate claps, never audible in a normal circumstance, contributed to the soundtrack, along with the league-approved, prerecorded crowd noise. Just a smattering of jersey-clad fans strolled around outside before kickoff, with no live music or smoking meats along the mostly empty streets.

The Vikings locked arms in the end zone for a recorded performance of “Lift Every Voice and Sing,” the Black national anthem now being played across the NFL. Nine relatives of George Floyd, including three brothers and one sister, were then recognized on the video board as they gathered around the Gjallarhorn in the upper concourse. The symbol of Norse mythology, sounded by a celebrity guest before each Vikings game, was kept silent in honor of Floyd, the handcuffed Black man who died three miles from the stadium on May 25 when a white police officer pressed his knee against his neck for nearly eight minutes.

Packers: RT Billy Turner (knee) didn’t play, initially replaced by Elgton Jenkins. When LG Lucas Patrick (shoulder) was forced out in the second quarter, Jenkins moved back to his original spot and free agent addition Rick Wagner entered at RT. Then in the fourth quarter, RG Lane Taylor (knee) was taken off on a cart with what appeared to be a serious injury, bringing rookie Jon Runyan in. ... DT Kenny Clark (groin) was hurt in the second quarter during Alexander’s interception and didn’t return. His backup, Montravius Adams, was also inactive (toe), so Kingsley Keke entered at DE and Tyler Lancaster slid over to the nose.

Vikings: Hunter’s absence ended his streak of 82 straight appearances, including postseason games, since he was a healthy scratch in the first month of his rookie year.

The Packers host Detroit next Sunday at Lambeau Field. Kickoff is noon.