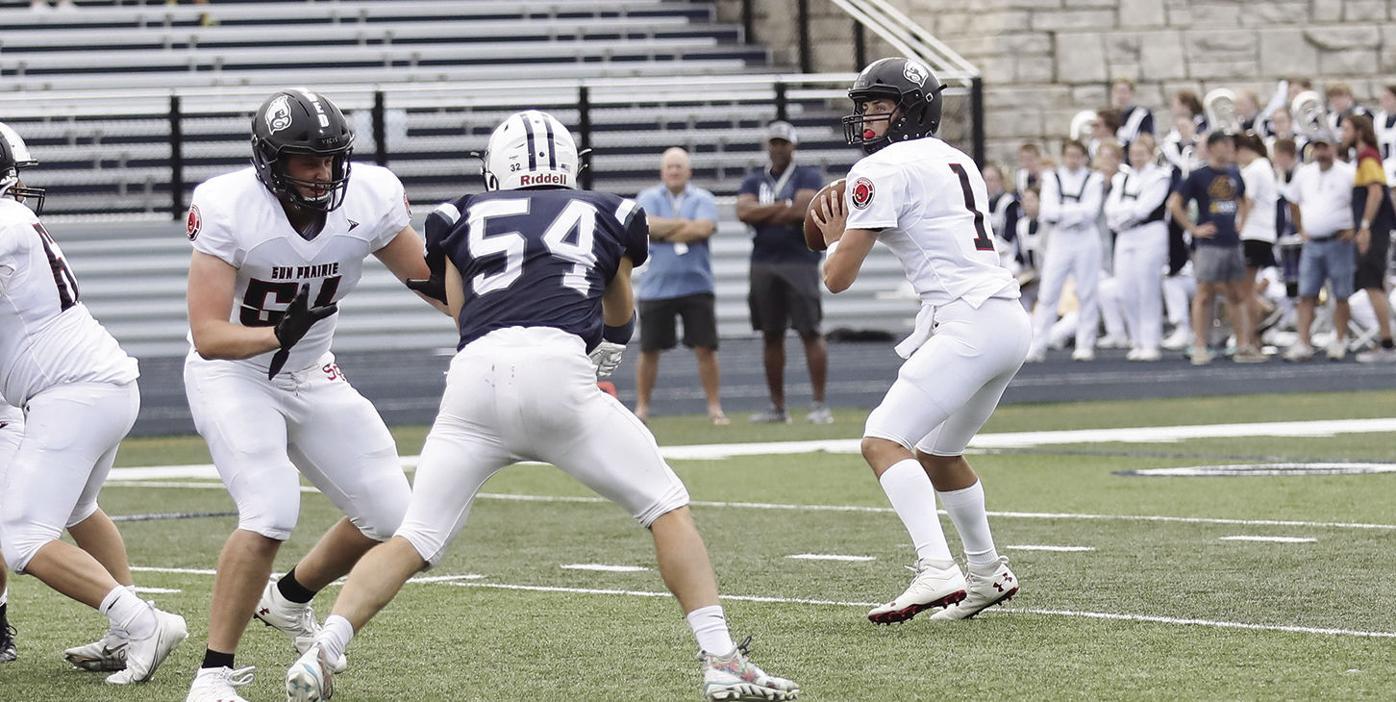 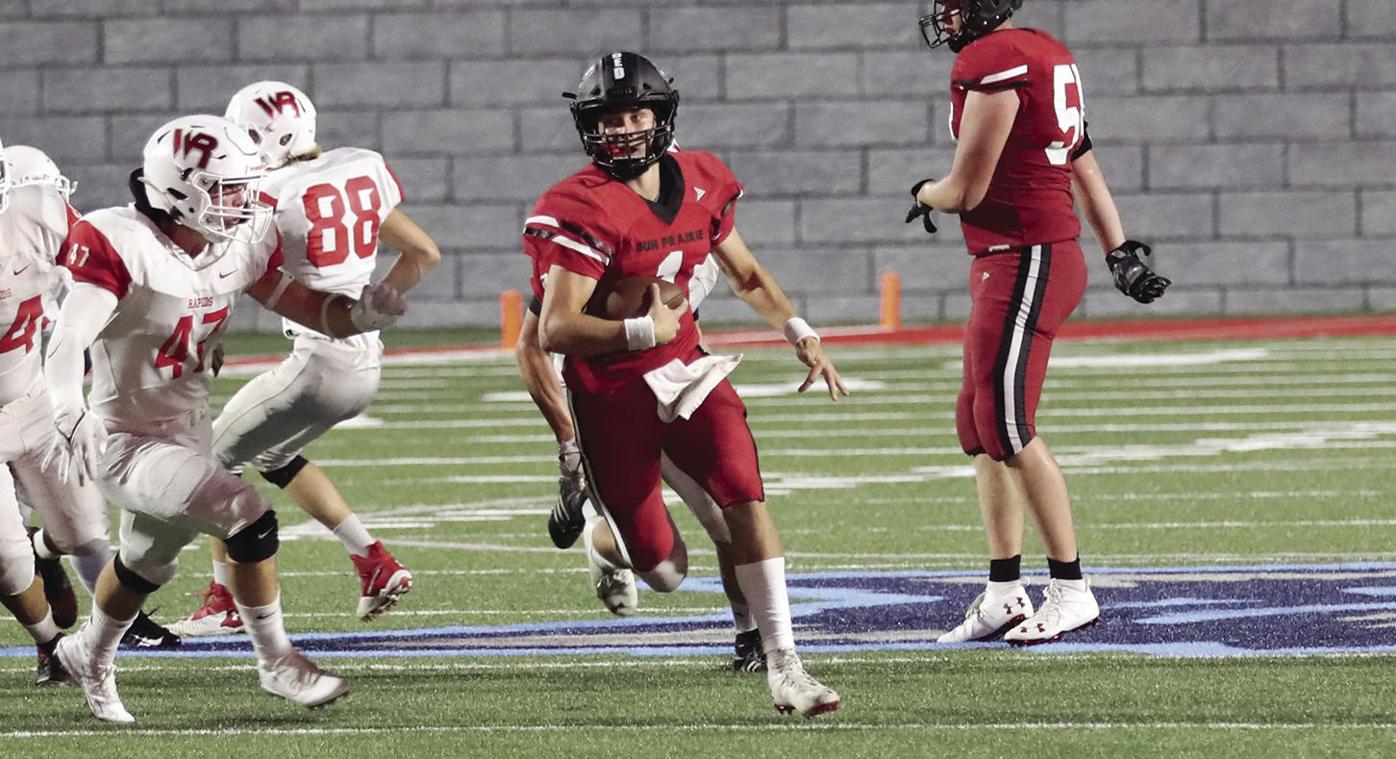 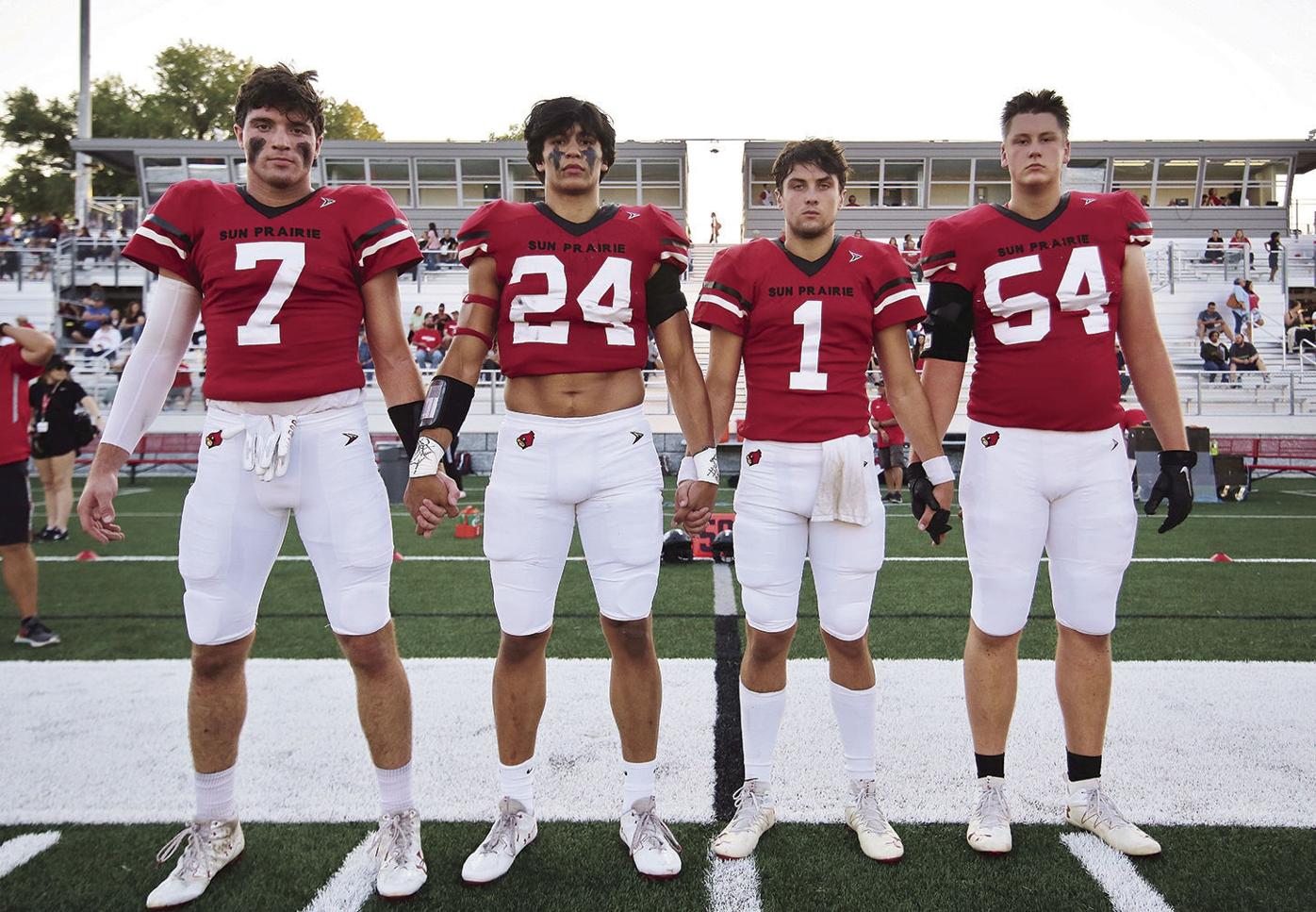 Sun Prairie quarterback Jerry Kaminski (1) is the only junior that was named a team captain for 2021. He's joined by seniors Addison Ostrenga (7), Isaac Hamm (24), and Evan Malcore (54).

Sun Prairie quarterback Jerry Kaminski (1) is the only junior that was named a team captain for 2021. He's joined by seniors Addison Ostrenga (7), Isaac Hamm (24), and Evan Malcore (54).

Sun Prairie junior quarterback Jerry Kaminski is catching some eyes on the recruiting trail, and for good reason. The 6’2”, 190 lbs. signal caller has been one of the best in the state this season and has led his team to dominant wins.

But, the trail is particularly tough for current high school juniors and seniors. The National Collegiate Athletic Association (NCAA) permitted all Division 1-A and 1-AA players, regardless of class, an extra year of eligibility due to the 2020-2021 season being eliminated or heavily affected due to the COVID-19 pandemic.

While this accommodates nicely for the collegiate players, it has an overwhelming negative impact on incoming players. Colleges and universities at the Division 1-A and 1-AA level only have a set number of scholarships to give out. Those aforementioned returning players gobble up scholarships and, in turn, opportunities for high schoolers to play at the next level. So, Kaminski has yet to be offered a scholarship. But it isn’t farfetched to say they are coming, even despite the conditions surrounding him.

Kaminski has been the catalyst for an absolutely electric Sun Prairie offense this season. After splitting time at quarterback as a sophomore in the spring of 2021 and throwing for 586 yards and seven touchdowns, he’s exploded this fall. Through four games this season, he’s completed 73% of his passes for 854 yards, 13 touchdowns and no interceptions. He’s also rushed for two scores.

Perhaps the most impressive part about Kaminski’s video game-esque numbers is he never gets to play the entire game. His Cardinals have enjoyed a 38-point average margin of victory this season, so head coach Brian Kaminski typically pulls his starters around halftime. Just last week against Beloit Memorial, Kaminski threw for 145 yards and three scores but was pulled after just the first quarter because Sun Prairie had already established a 34-0 lead.

The numbers draw the eyes in, but the tools Kaminski possesses are what keep the coaches calling.

“They like my poise and timing in the pocket,” Kaminski said of what coaches like about him. “They like that I’ll sit in there and make the tough throws. That, and that I can use my athleticism.”

So far, Kaminski has heard quite a lot from Nebraska, Wyoming, and Northern Illinois. All three schools are Division 1-A. Interest doesn’t end there.

He’s already been active with his visits, heading to two local schools in the first two weeks of the college football season. In week one, he made the short trip to Camp Randall to watch as Wisconsin took on Penn State. A week later, he headed south to Northern Illinois to watch as the Huskies took on another of his top suitors, Wyoming.

“It’s all been just crazy,” Kaminski said. “It’s such a great opportunity to get to visit schools and have them take an interest in me.”

He and his Cardinals are hoping to keep up the red-hot start to the 2021 season and keep those phone calls coming. If Kaminski keeps up this level of production, there’s no reason to believe he won’t end up playing at one of those schools instead of just visiting.