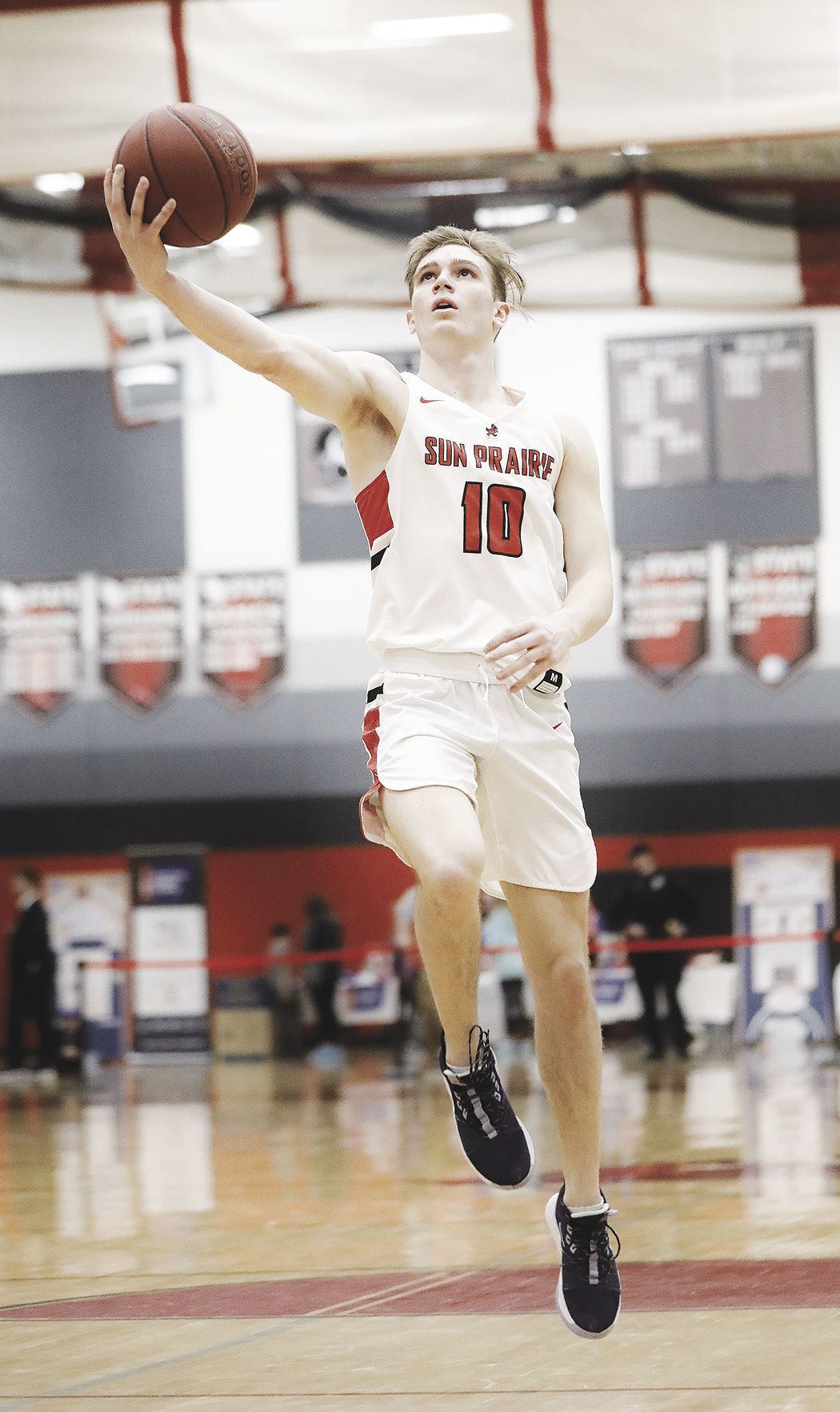 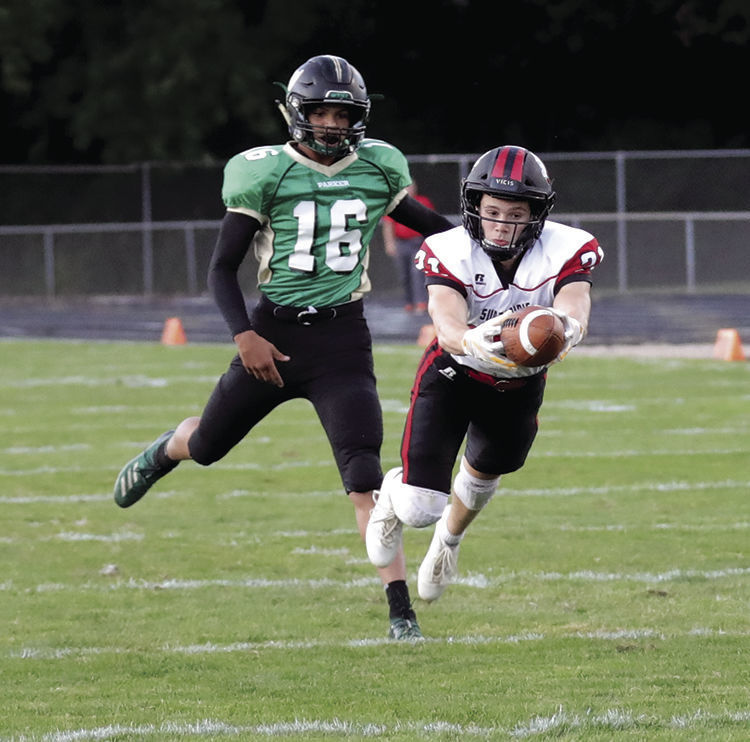 Colin Schaefer caught 134 passes, including a single-season school record 68 his senior year, for 1,828 yards and 20 touchdowns in his career.

Colin Schaefer caught 134 passes, including a single-season school record 68 his senior year, for 1,828 yards and 20 touchdowns in his career.

All of those terms can be used to describe Colin Schaefer, but the latter — his confidence — would best depict the now graduated Sun Prairie multi-sport athlete. It was with that conviction that Schaefer torched opposing secondaries and made impossible shots as he put the Cardinal football and basketball teams on his shoulders throughout a star-studded four-year prep career.

Schaefer’s senior year could be considered one of the greatest of anyone who has ever put on a Sun Prairie uniform. He was first-team All-Big Eight Conference in both football and basketball, and earned All-State recognition in both sports.

“To me it was kind of a personal goal, I mean you don’t really go out and say that, but going into my senior year I knew I was pretty good in football and pretty good in basketball,” said Schaefer. “Overall the first goal was to get (back) to state in both, but that didn’t happen, so then it was pretty cool to make All-State in both sports.”

Throughout his career he has been part of four Big Eight title teams, earned all-conference recognition three times and played in three WIAA state tournaments.

“He’s competitive and he wants to win,” said Sun Prairie boys basketball head coach Jeff Boos. “He’s going to get after it and find a way to get it done. I thought that was his M.O. when he came up young and he was able to provide that throughout his years here at Sun Prairie.

“That’s a piece of him that’s pretty special.”

Growing up athletics were a big part of Schaefer’s life as he played basketball and baseball. In fact football wasn’t even on his radar until his freshman season. It didn’t take long for the coaching staff to recognize Schaefer’s ability on the gridiron, promoting him to the varsity his sophomore year.

Playing behind all-conference wide receiver Cooper Nelson, Schaefer relished the role and became the team’s No. 2 wideout, making 36 receptions for 446 yards while scoring five touchdowns. All those numbers were second to only Nelson and earned him a spot on the Big Eight’s second team.

“Playing with guys like Marty (Strey), Kaden (Kauppinen), Caden (White) and Cooper, they’re all good players and good leaders so I learned a lot,” said Schaefer. “I was new to football, in fact I didn’t even know what a DB (defensive back) was, so guys like Cooper showed me things like how to run routes and walked through plays with me.”

It was also that year that he experienced his first WIAA state tournament. In the Division 1 state championship game against perennial champion Kimberly, Schaefer caught two passes for 17 yards in a 27-7 loss.

“Walking into Camp Randall was probably my favorite experience, just walking through the tunnels underneath and then running out onto the field at a huge stadium was really cool,” said Schaefer.

His junior season didn’t get off to a great start. A knee injury kept Schaefer off the football field for the first seven weeks, but when he returned he made an immediate impact, catching 30 passes for 392 yards while scoring three touchdowns in only five games.

“He was a playmaker,” Pertzborn said. “When Sun Prairie needed a play to be made, he was the guy.”

Pertzborn recalled the 2018 Level 1 playoff game where Schaefer was unstoppable. In just his third game back, Schaefer caught eight passes for a career-high 203 yards, the final reception a 66-yard touchdown early in the fourth quarter that gave Sun Prairie an eight-point lead.

“We knew he was a weapon and he was tough to stop; when you have him and Cooper Nelson, two quality wide receivers, they’re not easy to stop,” said Pertzborn.

With Nelson moving on to the University of Wisconsin, Schaefer became Sun Prairie’s go-to player for the first time in his career this past fall, and he relished the opportunity. He caught 68 passes — shattering Nelson’s 2018 record of 60 — for 990 yards while scoring 12 touchdowns, all of which led the Big Eight.

Not only were those numbers good enough to earn him first-team All-Big Eight honors, but he also earned first-team Wisconsin Football Coaches Association and Associated Press recognition

“This year I had to step up to kind of a bigger role and kind of play outside and inside after being mostly a slot receiver the two years prior,” Schaefer said. “There was a lot of telling myself ‘I can do this, too.’”

“The one thing about Colin is he does not lack confidence, and I say that in a good way,” said Sun Prairie football head coach Brian Kaminski. “He’s always had confidence in his ability to be great; he’ll go across the middle to make the big catch, and he did that quite often in his career. He’s a very intelligent football player.

“He was a key part of our offense; we knew teams were going to try and double-team him, but he was smart enough to get open.”

The one thing that Kaminski was both impressed and at the same time perplexed by was Schaefer’s ability to avoid the big hit.

“Some people just have that knack for that,” the coach added. “He just had one of the best seasons ever for a wide receiver in Sun Prairie football history.”

Baseball became his third sport, and he later would drop it.

“AAU basketball kind of got in the way,” Schaefer admitted.

Schaefer played for the varsity team all four years under Boos.

“He was a team leader for us all four years,” said Boos.

Schaefer averaged 4.8 ppg as a freshman and helped the Cardinals share the Big Eight title with Madison Memorial.

His sophomore year would be one to remember, not only for Schaefer but the entire Sun Prairie program. After averaging 6.7 ppg in 19 games while helping the Cardinals win the Big Eight title outright, he was the point guard of the very first Sun Prairie boys basketball team ever to reach the WIAA Division 1 state tournament.

Playing alongside Big Eight Player of the Year Marlon Ruffin and Jalen Johnson, who will play at Duke University, was an experience Schaefer won’t soon forget.

“Playing with guys like that that are going on to play at the next level was fun; I haven’t really wrapped my head around seeing Jalen play on TV next year,” said Schaefer, who still works out with Johnson from time to time.

Although Sun Prairie lost 52-50 to Brookfield East in overtime on a last-second shot, Schaefer savored the opportunity to play at the Kohl Center.

“It was fun to play in front of a packed house with everyone on their feet,” Schaefer said.

The injured knee that kept him off the football field for the first part of his junior year flared back up when basketball began, and forced Schaefer to sit out the first 19 games of the 2018-19 season.

But much like in football, when he did return he made an impact. Schaefer averaged nearly 12 points per game and led Sun Prairie back to the Kohl Center. In the Division 1 state semifinal, Schaefer scored five points, grabbed five rebounds and dished out three assists in a double-overtime win over West Allis Central, the first-ever state tournament victory in SPHS history.

That put Schaefer in a position to win a state championship again, but it didn’t come to fruition as the Cardinals lost 69-52 to Brookfield Central. Schaefer scored 11 points in the loss.

“I couldn’t really figure out what was going to help it and that was pretty frustrating,” he said about the injury. “I like to think that I could have broken quite a few records if I would have played full seasons my junior year, but in the end it all worked out.”

Schaefer’s was healthy his senior season, and it was there that everyone took notice. The 6-foot-1 point guard averaged 17.8 points, 4.8 assists and 2 steals per game en route to earning first-team All-Big Eight honors and honorable mention Associated Press recognition.

“He was a really solid, all-around basketball player,” Madison East head coach Matt Miota said. “He’s a great decision-maker as a point guard and his shot selection is really difficult (to defend), I mean he made some shots that you can’t really guard against.”

Schaefer missed both games against East his junior year. However, in eight career games against the Purgolders Schaefer averaged only around 7 ppg, but this past season he had games of 15 and 11 as the two programs split in Big Eight play.

“Coming back from that (knee injury) and maintaining that level of confidence when you have a physical injury like that is hard. Definitely mental toughness is one of his strengths,” Miota said.

Miota hopes to have the opportunity to coach Schaefer during the WBCA All-Star Games in August. Schaefer will join East’s Keonte Jones along with Isaiah Stewart and Derek Gray of fellow Big Eight rival Madison La Follette.

“That would be fun to let those kids play and I was looking forward to coaching that group,” said Miota of the Aug. 6 game at JustAGame Fieldhouse in Wisconsin Dells.

“He’s going to be a very good player at the next level, I have no doubt about that,” added Boos.

Where that next level is has yet to be determined, but his sport of choice will be basketball. He will be visiting Lindenwood College, a Division II school in Missouri, and has generated interests in several Division III and junior college programs.

Schaefer was also selected to play in the WFCA All-Star Game, but the annual game in July was canceled due to COVID-19.

Schaefer can hang his hat on having played in more WIAA postseason games than any other Sun Prairie basketball player, a total of 15, and 11 of them wins.

“To me it was a pretty big deal to have played in all those playoff games,” Schaefer said.

Years down the road when Colin Schaefer’s name is mentioned, he’ll be remembered as one of the greats in the history of Sun Prairie athletics.

“He’s competitive and he wants to win. He’s going to get after it and find a way to get it done. I thought that was his M.O. when he came up young and he was able to provide that throughout his years here at Sun Prairie. That’s a piece of him that’s pretty special.”