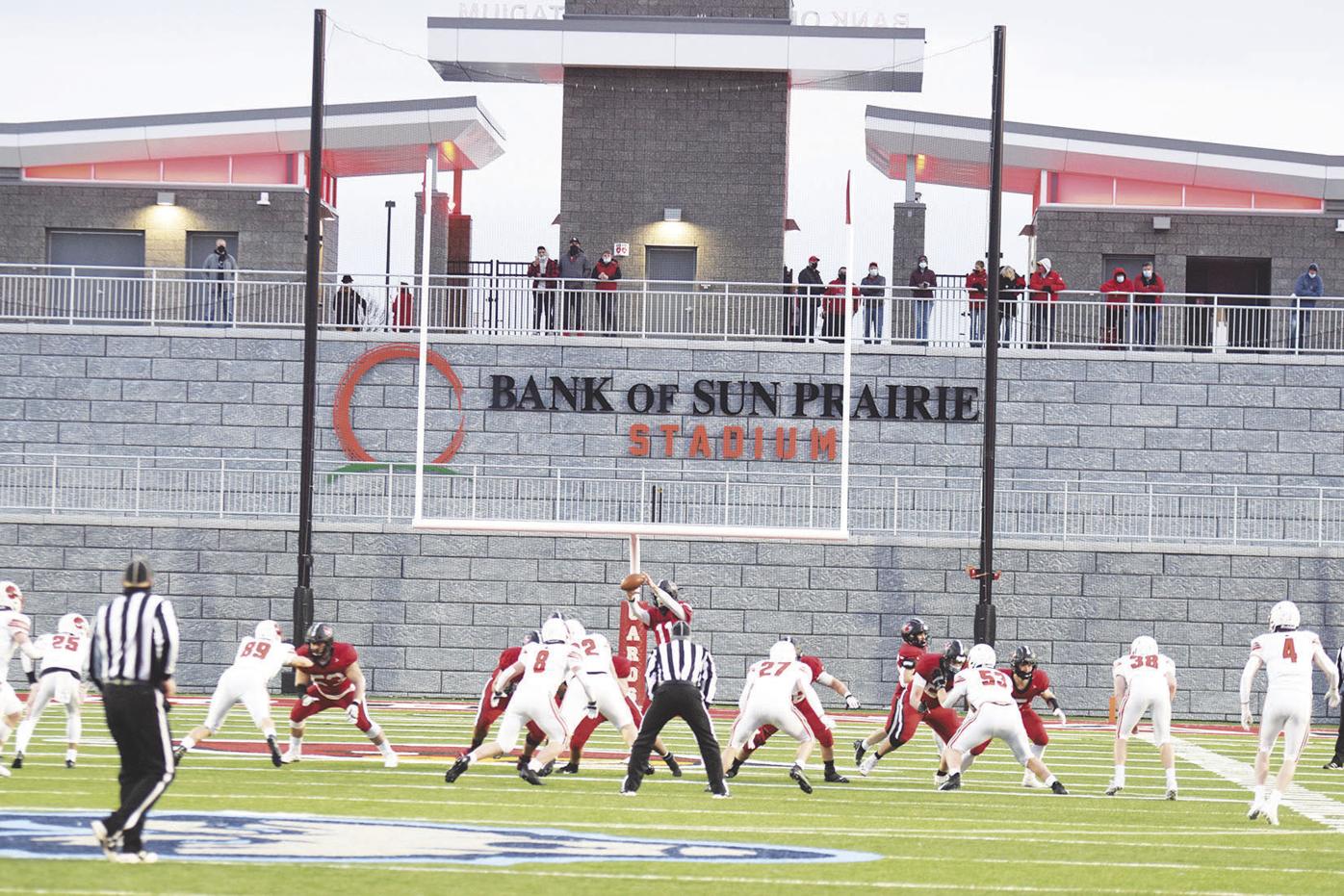 A 17-0 shutout over Verona on Friday, March 26, 2021 will go down in history as the first win at Bank of Sun Prairie Stadium at Ashley Field. 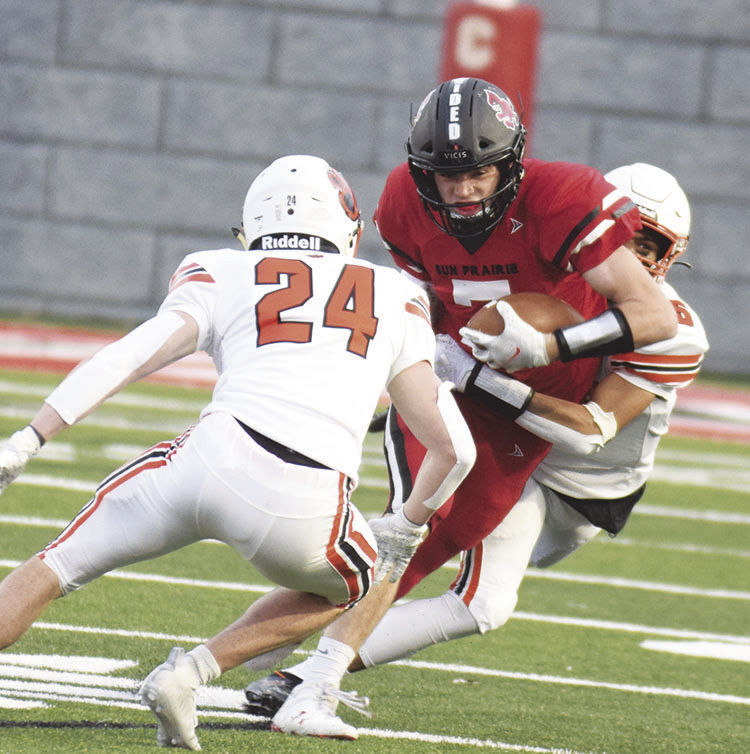 A 17-0 shutout over Verona on Friday, March 26, 2021 will go down in history as the first win at Bank of Sun Prairie Stadium at Ashley Field.

You could say the Sun Prairie football team broke in its new stadium with resounding success.

The Cardinals scored two touchdowns in a 45-second span late in the first half, taking control of the alternate fall season opener and eventually earning a 17-0 win over Big Eight Conference rival Verona on a picturesque March Friday night.

“It’s been a long time coming,” said Sun Prairie head coach Brian Kaminski. “Fifteen months or whatever it was, we played with energy, we played with a passion and I thought our kids really rose to the challenge tonight.”

It was a night of firsts as not only was it the first game played at the newly renovated Bank of Sun Prairie Stadium at Ashley Field, but it also was the first-ever football game played in March during the alternate fall season.

“It’s surreal to be honest,” Sun Prairie senior linebacker Austin Knade said. “We always think that if COVID wasn’t a thing how this whole thing would be packed; our sideline did a good job of keeping us up and we had some of our fans here doing a good job, too.”

The game was scoreless through the first 20 minutes as the two teams — both of whom hadn’t played since November of 2019 — were working off months of non-competition. That all changed in the final four minutes of the first half.

The night’s first score was set up by a 26-yard Jerry Kaminski-to-Kamron Gothard pass. After Kaminski, a sophomore who platooned all night with senior incumbent Brady Stevens, found Gothard down the near sideline and the senior wideout made a leaping grab at the 2-yard line.

One play later Michael McMillan became the answer to a future trivia question on who scored the first touchdown at Bank of Sun Prairie Stadium, catching a fly (shovel) pass from Kaminski and scoring from 2 yards out. The first-ever touchdown scored in March gave the Cardinals a 7-0 lead with 3:56 left in the first half.

Two plays later Gothard was on the receiving end of a 21-yard pass from Stevens, this time landing in the end zone. Owen Konopacki’s extra-point kick split the uprights and the Cardinals lead grew to 14-0.

A blocked punt by Addison Ostrenga set up Sun Prairie’s first score of the second half, a 36-yard field goal at the 7:37 mark.

Smith’s play was only part of a big defensive night by the Cardinals, who limited the Wildcats to just 10 yards on the ground and 101 total yards.

“Our defense was unbelievable tonight and it starts up front, our four dudes were dudes tonight,” said Kaminski of Smith, Knade and fellow defensive linemen Isaac Hamm and Sam Johnsrud, along with senior Carter Helt.

The Cardinals held Acker to just 16 yards on eight carries, and more importantly out of the end zone.

“Going into the game we really weren’t keying on (Acker) that much, but we knew our defense was good enough to take him down,” Knade said of the future Badger. “We truly believe we have one of the best defenses in the state.”

Kaminski took over at quarterback on the Cardinals’ third series and moved the team down the field. However, facing a 4th-and-1 at the Verona 15 on the first play of the second quarter, fellow sophomore Kolten Walters was stopped in the backfield by Mason Armstrong and the Wildcats took over on downs.

But the two scores before the half, one guided by Kaminski and one by Stevens, ultimately led to the alternate season-opening victory.

“They both played well,” said Kaminski, who quickly pointed out that there is no quarterback competition. “Brady had a heck of a throw for his touchdown to Gothard and I thought Jerry managed some things well and threw a good ball … together they can be great.”

Sun Prairie won both meetings during the 2019 season, including a WIAA Division 1 Level 1 playoff win that saw the sixth-seeded Cardinals beat the third-seeded Wildcats, 51-28.

“It’s surreal to be honest. We always think that if COVID wasn’t a thing how this whole thing would be packed; our sideline did a good job of keeping us up and we had some of our fans here doing a good job, too.”