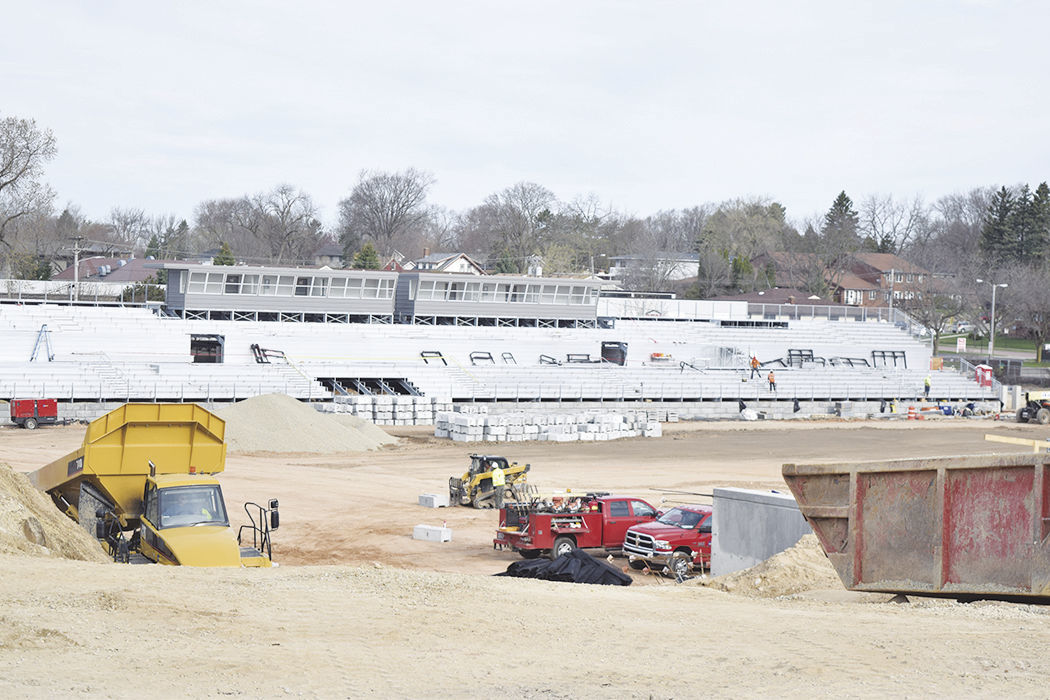 The Ashley Field project remains right on schedule. Above is a view of the bleachers and press boxes on the west side of the field. 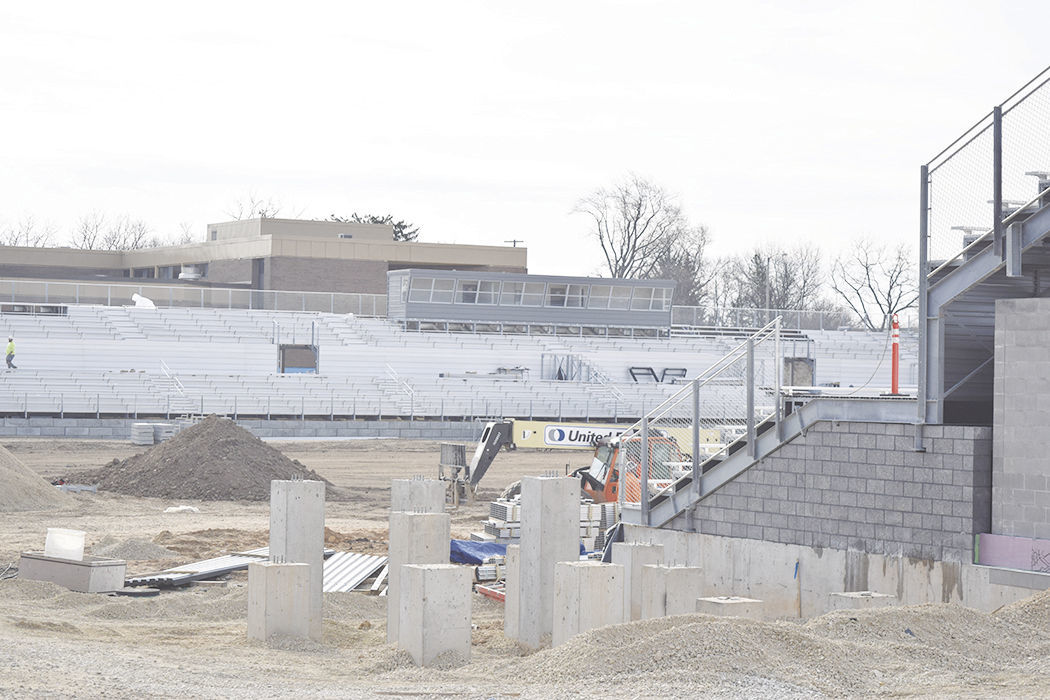 Ashley Field is scheduled to be completed before the first football game of the 2020 season, when the Sun Prairie Cardinals host the Hudson Raiders on Friday, Aug. 21 in a 7 p.m. kickoff. 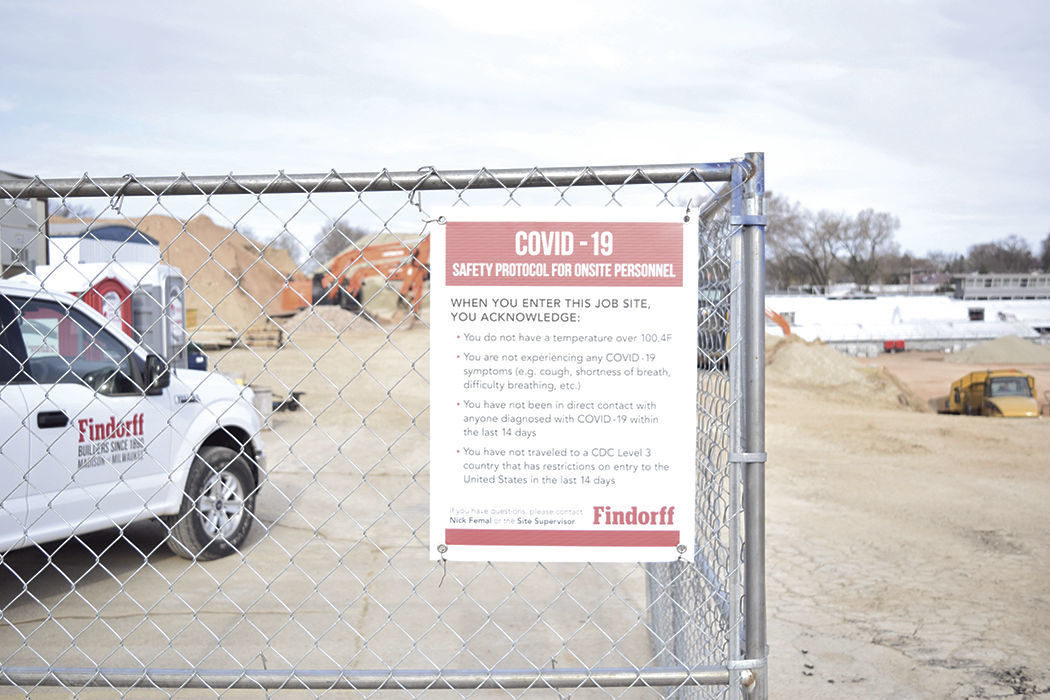 Workers of J.H. Findorff & Sons, Inc. have been complying to the COVID-19 regulations while working on the Ashley Field project.

Ashley Field is scheduled to be completed in mid-August. 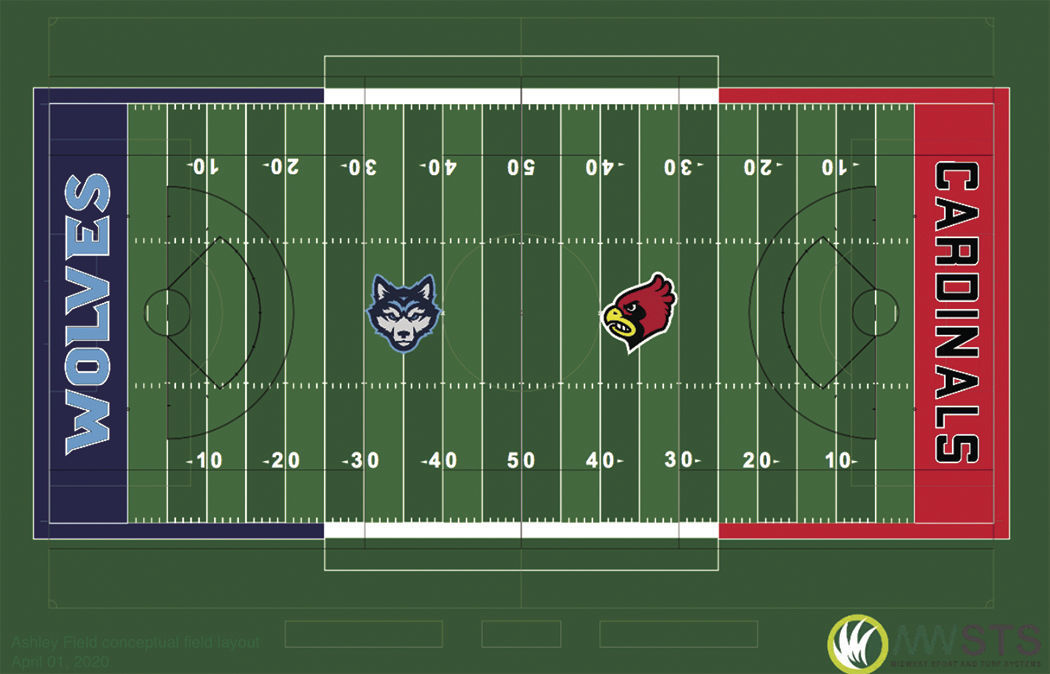 A rendering of what the new Ashley Field turf will look like with both the Sun Prairie East Cardinals and Sun Prairie West Wolves.

The Ashley Field project remains right on schedule. Above is a view of the bleachers and press boxes on the west side of the field.

Ashley Field is scheduled to be completed before the first football game of the 2020 season, when the Sun Prairie Cardinals host the Hudson Raiders on Friday, Aug. 21 in a 7 p.m. kickoff.

Workers of J.H. Findorff & Sons, Inc. have been complying to the COVID-19 regulations while working on the Ashley Field project.

Ashley Field is scheduled to be completed in mid-August.

A rendering of what the new Ashley Field turf will look like with both the Sun Prairie East Cardinals and Sun Prairie West Wolves.

Ashley Field is right on schedule. Those are the words Sun Prairie residents have longed to hear.

Ashley Field improvements were part of the $169 million referendum that passed in April 2019.

“Conditions we were dealt with over the winter allowed us to do the things we didn’t think we were going to get going on until later in the spring,” he said. “I think we’re in a really good spot.”

Sukow added: “I think we should all collectively knock on whatever wood or item we have around so we don’t jinx ourselves.”

Originally built in 1953 for football and baseball, Ashley Field was also used for two other Sun Prairie High School athletics, lacrosse and soccer. The new reconfiguration eliminated the baseball field used by the Home Talent League amateur baseball team Sun Prairie Red Birds, and was turned 90 degrees with its end zones now facing north and south rather than east and west.

“We are on schedule,” said Tubbs. “The project’s been going very well. We’ve been hitting every one of those milestones. Certainly, getting the bleachers in, getting the press boxes up were two of those.”

The press boxes were installed on April 20.

Tubbs said there have not been any major delays during the project.

“The weather has cooperated,” Tubbs said. “Coming off a polar vortex last year that was our biggest concern going into this, so thankfully Mother Nature has been really kind to us.”

Tubbs said there are about 50 on-site workers daily.

Findorff reached out to the neighboring homes, going door-to-door to personally give them the company’s contact information.

“We told them to reach out to us with any questions or complaints, and to date we have not fielded any concerns,” Tubbs said.

The Ashley Field project is slated to be complete before the first football game of the 2020 season, on Friday, Aug. 21 when the Sun Prairie Cardinals host the Hudson Raiders in a 7 p.m. kickoff.

“There’s some things we want to do, occupancy would be before that, but most importantly trying to maximize the time that we can get Sun Prairie in there and get their IT and video set up,” said Plautz. “We’re tracking dates and we’re on time and schedule for being done by the first football game.

“From an overall stand point I would say most everything will be complete — there may be some railing or certain things that would still need to be done right at the end — overall things are looking well,” Plautz added.

Plautz said the next phase that the public will notice while driving down Main Street will be the erecting of the lights, which are scheduled to be installed in early May.

“I would say later May the field turf will be delivered and start being installed, you’ll start to see the plaza and concession stands and bathrooms really start to take shape by June. Those are the three big ones right now,” said Plautz.

The Sun Prairie Area School District (SPASD) unveiled the new Sun Prairie West Wolves logo on Thursday, and Sukow shared a rendering of the first synthetic field turf in Ashley Field history with both the new logo and current Cardinals logo which will be reserved for Sun Prairie East. (See photo on B3 in the April 28, 2020 issue of the Sun Prairie Star).

Sun Prairie Athletics and Activities Director Eric Nee pointed out the interior lining for both lacrosse and soccer.

Plautz added: “This is what we’re working on with our vendor on, but it is still conceptual because it’s not in the ground yet; this is what we’re planning on, but there might be small tweeks or changes.”

Sukow has not heard any backlash from the community or taxpayers as the project proceeds, even during this unforeseen time when the nation and the economy is going through the coronavirus world pandemic

“This project was bonded and put forth before all this happened; we obviously had no idea that we would see our facilities and economy shut down for who knows how long,” Sukow said. “I have not heard anything specifically about our capital projects that we took to referendum.”

“I think everybody’s excited,” said Nee. “It’s something that’s been talked about since I became athletic director seven years ago. I think that anxiousness and excitement to get in there and use those locker rooms, as minor as it may sound, and then to get on that field and use that field and as much as we’re going to be able to use it -- for football, soccer and lacrosse -- adds to it.”

“We drive by there once or twice a week just to check out the progress,” he said. “I see five, six, seven cars drive by when I’m there, so I can’t imagine how many cars Justin, Jeff and the on-site guys see every day just checking it out.”

Daktronics scoreboards will also be a new feature to Ashley Field.

“Madison-area schools such as Mansfield Stadium (at Memorial) and Waunakee have these scoreboards,” Nee said. “There will be opportunities for sponsorship or advertising through those and that money will be used for when things need to be fixed or things need to be upgraded because a scoreboard lasts only so long.

Nee also mentioned that the video board brings to the District a curricular piece.

Sun Prairie West ground was supposed to be broken last week, but with the COVID-19 situation it has been delayed. However, plans to open the school for the 2022-23 school year are still a reality.

In the meantime, Nee and a committee are working on the restructuring of the athletic program.

“Our Athletics and Activities Configuration Committee is coming up with a plan for our athletics and activities (clubs) are going to look like in Sun Prairie. A survey went out to all of our middle school and high school students on who plans on participating in future athletics and club sports, and we’re looking at neighboring districts on what they have for numbers on certain sports,” said Nee.

Earlier this month athletic directors of the Big Eight Conference voted and a motion passed to unanimously accept Sun Prairie West for non-football beginning in the 2022-23 school year.

Beginning this year football conferences throughout the state will begin the new football-only conference realignment. Janesville Craig and Janesville Parker left the 10-team Big Eight for the Badger Conference, making the Big Eight an eight-team league once again. However, when Sun Prairie West joins, the conference again will likely be realigned under the current eight-team conference format.

On Oct. 15 Nee will take a proposal to the Wisconsin Interscholastic Athletic Association (WIAA) on what the football-only conference will look like.

Tubbs wanted to address the COVID-19 situation and how he and his staff have been taking precautions surrounding it.

“We’re taking into account all the CDC regulations and guidelines. We’re doing the social distancing as good as possible: we’ve got hand-washing stations, facemasks when workers do have to work close to each other, we’re staggering our breaks and lunches to keep people separated as possible and doing a complete sanitizing of all the hand tools. We’re certainly taking into all things that we’re allowed to do as an essential business while making sure all of our employees and subcontractors are staying safe on the job,” Tubbs remarked.

A community open house will be held once the Ashley Field project is complete.

“In some cases, we’re even doing better ... I think we should all collectively knock on whatever wood or item we have around so we don’t jinx ourselves.”