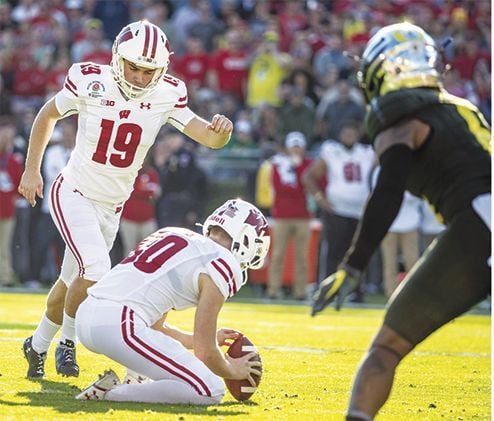 Collin Larsh attempts a kick in the 2020 Rose Bowl, which Wisconsin lost to Oregon. The Marshall native converted on 12-of-18 field goal tries last season and missed just one of 54 extra-point attempts. 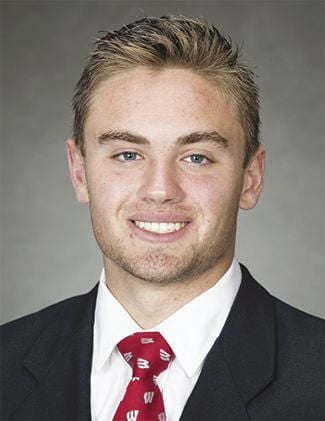 MADISON — It all began for Collin Larsh when he was playing football as a grade schooler in his hometown of Marshall and his team needed a placekicker.

“We didn’t have a ton of guys on the team, we had a kicking tryout, and I got locked into the job,” he recalled. “Once I realized I was OK at it, I started practicing more and more.”

After a successful career kicking for the Monona Grove High School football team, Larsh is now the No. 1 guy for the Wisconsin Badgers, who open their season tonight against Illinois at Camp Randall Stadium. Hard work, practice and most of all, learning to deal with the mental aspect of kicking, has led to Larsh getting his opportunity in the Big Ten.

Last season, Larsh was good on 12-of-18 field goal attempts and converted 53-of-54 extra points as Wisconsin finished 10-4 overall.

The Badgers ended the season with a loss to Ohio State in the Big Ten Championship and another setback in the Rose Bowl against Oregon, but the team is hoping the abbreviated 2020 season will lead to greater success.

Larsh said his biggest mentor on the Monona Grove football team was coach Mark Rundle, who guided him on the nuances of kicking.

“He pointed me in the right direction after I started taking it seriously,” Larsh said. “He knew I could take my placekicking to the next level.”

As a senior, Larsh earned the Kevin Stemke award as Wisconsin’s top high school kicker, was named first team all-state by the Wisconsin Football Coaches Association and earned a spot on the first team All-Badger Conference team as a placekicker and punter.

In his high school career, Larsh was good on 82-of-86 extra point attempts, converted 9-of-13 field goal tries and was credited with 66 touchbacks, including 55 in 2016 when the Silver Eagles advanced to the Wisconsin Interscholastic Athletic Association (WIAA) Division 2 state title game against Brookfield East in his senior season.

Monona Grove finished the year with a regular season record of 7-2 but received just a No. 5 seed entering the postseason.

“A lot of guys took that as a chip on their shoulder and made the most of what we had,” Larsh said. “I think we liked being the underdog that season.”

“We felt like we were the best team in the state for sure. I still think we were,” Larsh said. “We just had a couple of bad plays not go our way. But that’s football.”

In addition to kicking, Larsh was also quite accomplished as a wide receiver and defensive back. He caught 11 career passes for four touchdowns and made 70 total tackles with one sack.

He said balancing those different responsibilities on the football team was not difficult.

“It was definitely fun. I grew up playing a lot of positions,” Larsh said. “I wish I could still play all those positions. It felt like backyard football.”

Yet, Larsh was destined to be a placekicker and with Rundle’s help, he signed up for Kohl’s Kicking, a recruitment agency that ranks the nation’s top placekickers and punters.

After receiving a high ranking, many different colleges came calling, including Iowa, Southern Illinois, Northwestern, Purdue, Tennessee and Army. But Larsh’s heart was always close to Wisconsin and he ended up joining the Badgers.

“Wisconsin had always been my No. 1 choice,” he said. “That’s where I always wanted to go.”

Life in the Big Ten

Upon entering the UW, he picked up another mentor in the team’s first-string kicker Rafael Gaglianone, who gave him pointers on kicking at the college level and how to transition from high school.

“He was a great kicker,” said Larsh, who took over as the team’s starting kicker in 2019 after Gaglianone graduated.

Larsh also learned about the mental approach to kicking and how to overcome those times when kicks may not split the uprights. He received valuable advice from Taylor Mehlhaff, the Badgers’ special teams coach.

“Kicking is a lot more mental than it is physical. It’s just a matter of how consistent you can be and how much you can control the moment,” Larsh said. “From a mental standpoint, I have improved a ton.

In 2019, Larsh had three field goals in a game twice, against Illinois and Nebraska. In the Rose Bowl, he made 2-of-3 attempts against Oregon and matched his career long 44 yards.

As for the 2020 season opener against Illinois, there will be no fans in the stands in compliance with Dane County’s restrictions on social distancing and crowd gatherings due to the COVID-19 pandemic. Larsh said the team feels safe, thanks to guidance of the coaching staff and athletic trainers, and the players are looking forward to getting the season underway.

“It’s getting exciting. It’s going be a good game,” he said.