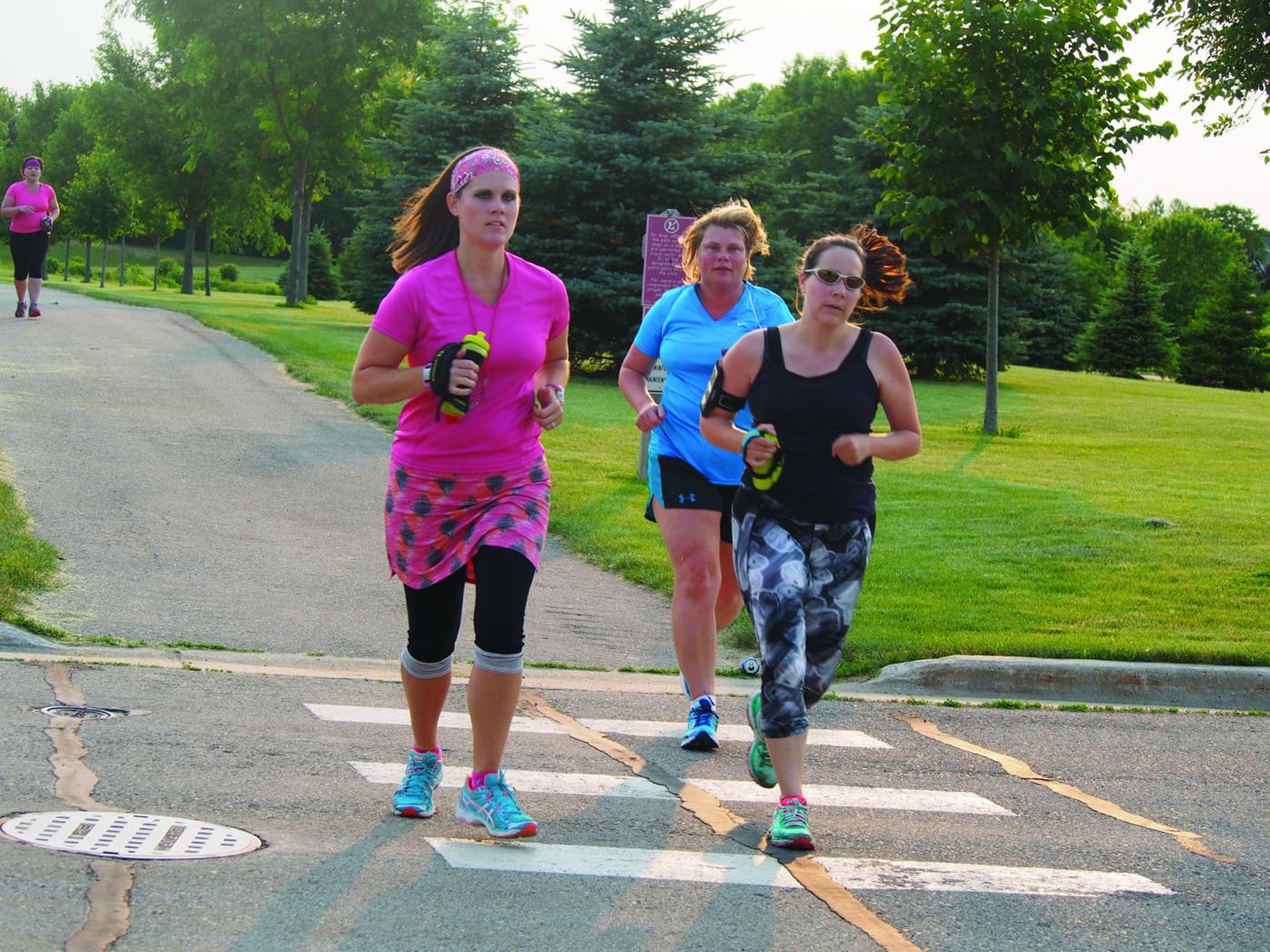 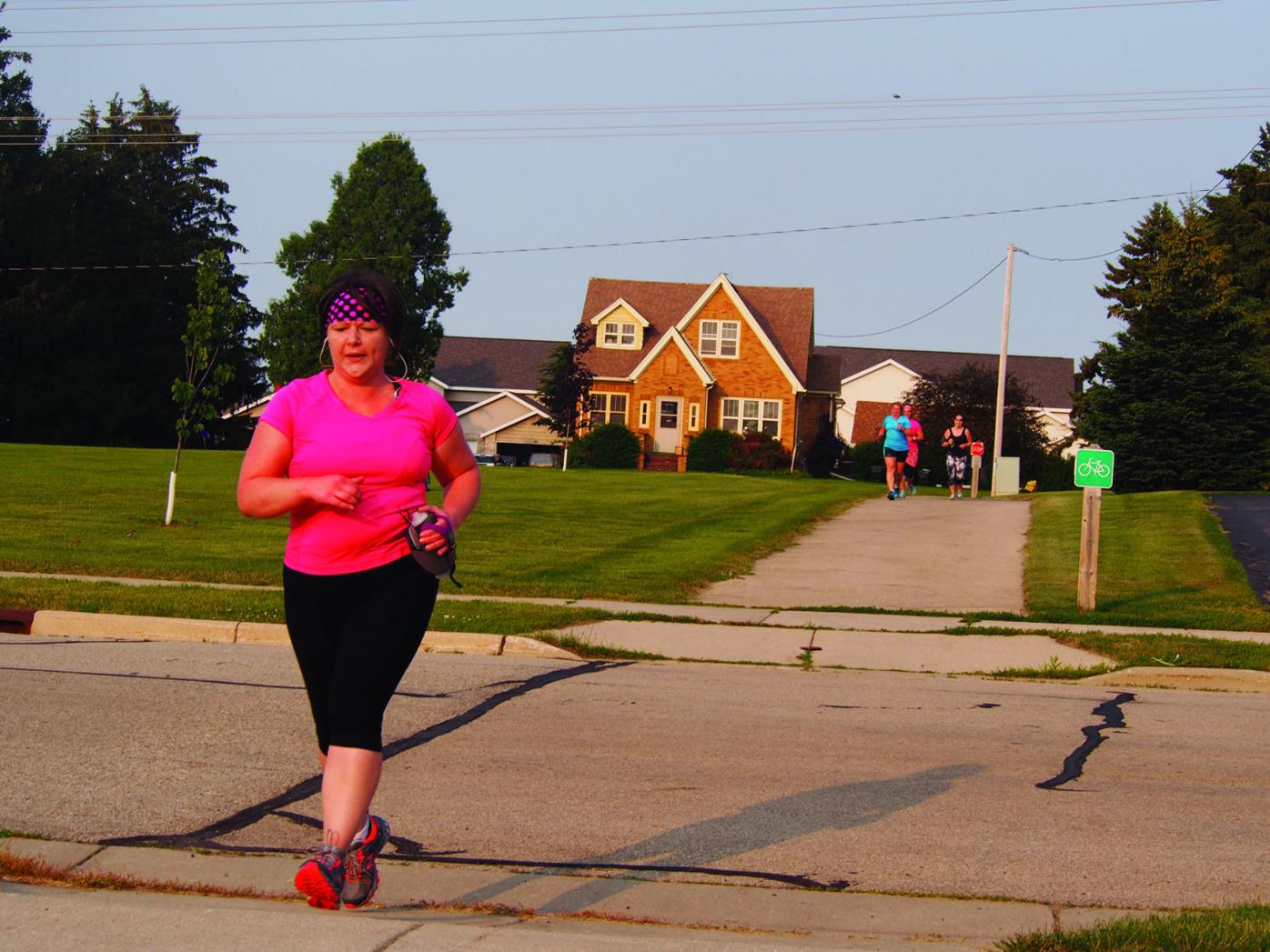 Laura Hunter, who ran her second 10K on the Fourth of July, forges ahead. 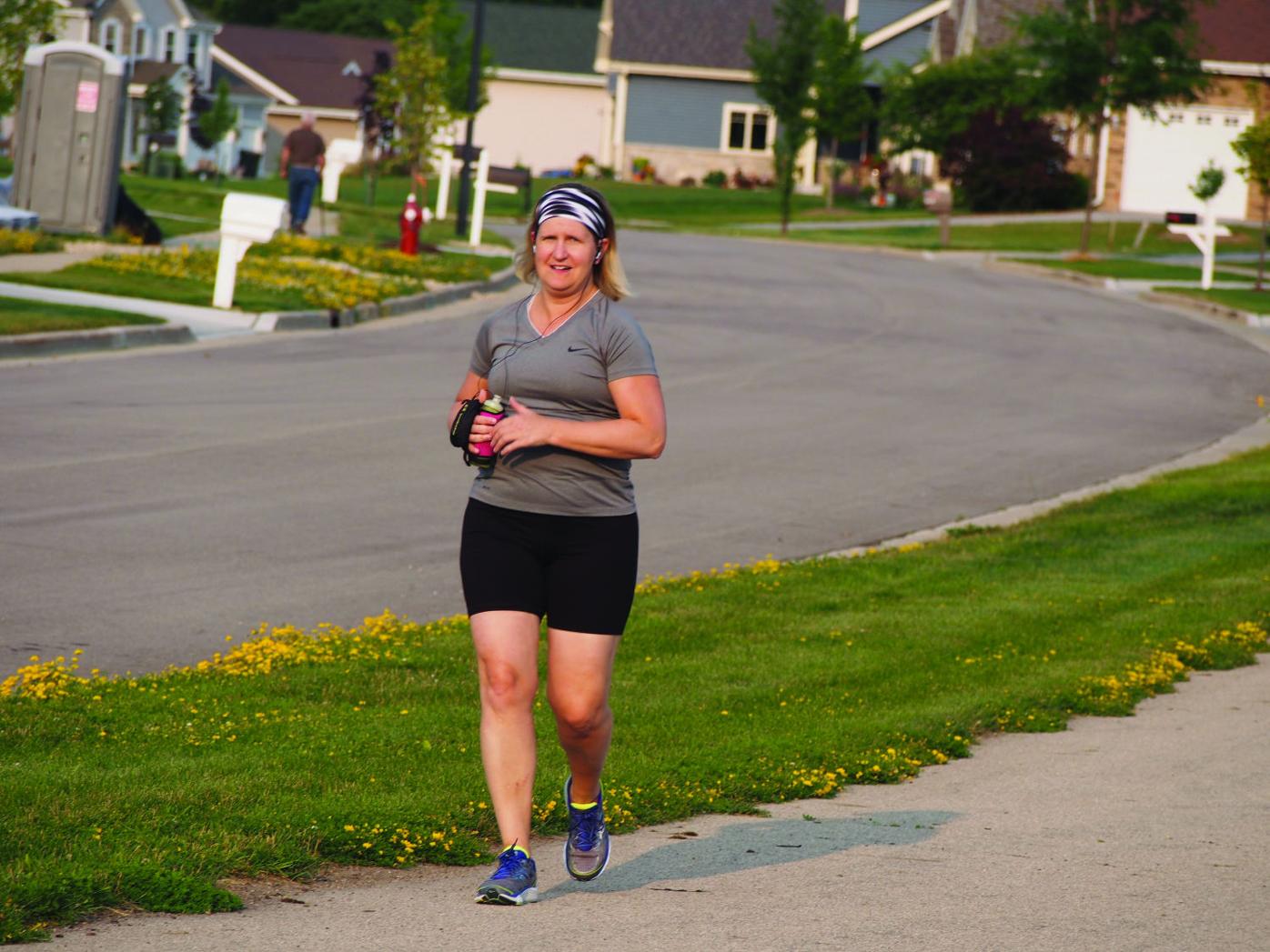 Marcia Doll, who joined the group to find motivation to stay action, and set an example for her son. All five, including leader Jamie Adcock, finished the 10K.

Laura Hunter, who ran her second 10K on the Fourth of July, forges ahead.

Marcia Doll, who joined the group to find motivation to stay action, and set an example for her son. All five, including leader Jamie Adcock, finished the 10K.

Five women gathered at Stonehaven Park on a warm Thursday evening in early July. At 6:45 p.m., they started walking toward a lake, and when a whistle sounded, everyone took off running.

The women’s running group had been meeting since May, training for an hour each Thursday. They were preparing together for the DMB Freedom 10K together on July 4th. Jamie Adcock, a Sun Prairie running trainer, leads the group. She is a certified running coach who also works with runners on-on-one or on couch-5 K groups for non-runners.

On her popular blog, Running Diva Mom, Adcock chronicles her adventures as a runner, both the highs and the lows. In a recent post about completing Grandma’s Marathon in Duluth, Minn., with her husband, she describes both the challenges: Brutal humidity, drizzling rain and porta-potty lines – and also recounts the victories, such as the times she was feeling down and pumped herself back up, and of course, finishing the marathon on top of being pregnant with her third child, a girl due in December.

The 5K to 10K group ran the route at different paces. At times, some charged ahead, while others took it slower. A few, including Jamie, keep a steady pace, chatting most of the way.

Jamie seemed to alternate between roles as a cheerleader and a fellow runner still figuring this all out. She laughed as she tells the story of the practice 10K run the group had done of the upcoming course, where they had all been confused by unexpected construction.

Though she doesn’t set herself above the group, she is also undoubtedly the leader. She promised group members she would ask organizers about the construction before race day, and during the Thursday run she keeps track of time and shouts encouragement.

“Focus on your breathing, not your legs,” she called out toward the end.

The workout was shorter than normal, with the 10K only a few days away. The group spent a half hour running through the paths around Stonehaven, down Bird Street, past Liberty Square, backyards with smoke drifting from barbeques and the Liberty Playground.

As they stretched afterward, Adcock gave advice for the morning of the race – bring a water bottle, eat a mix of carbs and protein. Though Adcock said she wouldn’t be choosing cereal.

“If I’m nervous before a race I can never chew, so I have to have like oatmeal or yogurt,” she told the group, laughing.

There was a distinct bond between the members, something that seemed to transcend just running. As they stretched, they laughed about the race day- worrying about hitting snooze and dragging family members there in the morning, joking about whether there would be free alcohol at the end.

They arranged to meet early on race day – all wearing headbands Adcock supplied.

Hunter had good reason to be enthusiastic. She was at the front of the pack for most of their run. Hunter stepped up her running after making a New Year’s resolution to finish both a 10K and a half marathon – and the race on the fourth was her second 10K.

“It’s nice to get the accountability of a group,” she said.

Stefanie Spohn said she also looked to the group for motivation.

“Being in a group just pushes you,” she said. “I was just telling Laura, I ran the fastest I’ve run in weeks because she’s here.”

Spohn, the mother of a 3-year-old and 8 month old, said she enrolled in Adcock’s couch-5K class through the Park’s Department to “get rid of the baby weight and just get active again.” It didn’t take long for her to get hooked.

“After the first 5K I had a super runner’s high and just wanted to keep going,” she said.

Marcia Doll decided to start running five years ago partly to model an active lifestyle for her 20-year-old son, who at the time was a cross-country runner in high school. She looked for a group that would give her support in staying active.

All five members finished the Fourth of July race. Hunter said she was able to beat her earlier 10K time by four minutes.

Traci Menzel joined the 10K group after completing one of Adcock’s couch - 5K groups, where the group starts off by running in one-minute intervals. Menzel said she has come a long way.

“Before I couldn’t even run from one mailbox to the next,” Menzel said. “So I’d call that an improvement.”