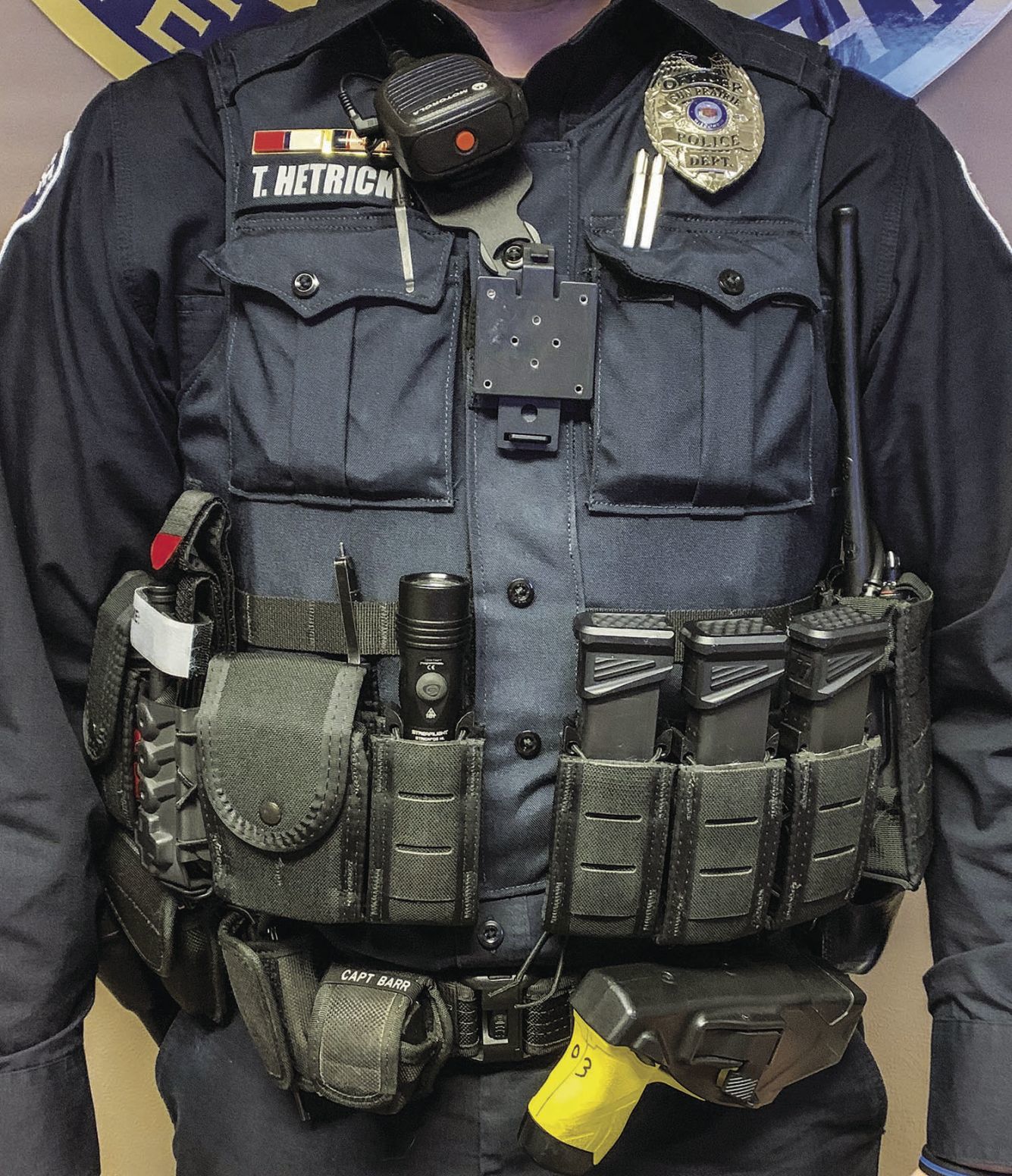 This photo featuring Sun Prairie Police Officer Hetrick shows the gear distribution on the new vests that the Sun Prairie Police Department is starting to use. The goal is to more evenly distribute gear to the vest that previously sat on their duty belt around the waist. The result is improved officer wellness by moving the weight of the equipment from the belt and the lower back to the upper torso on the vest. 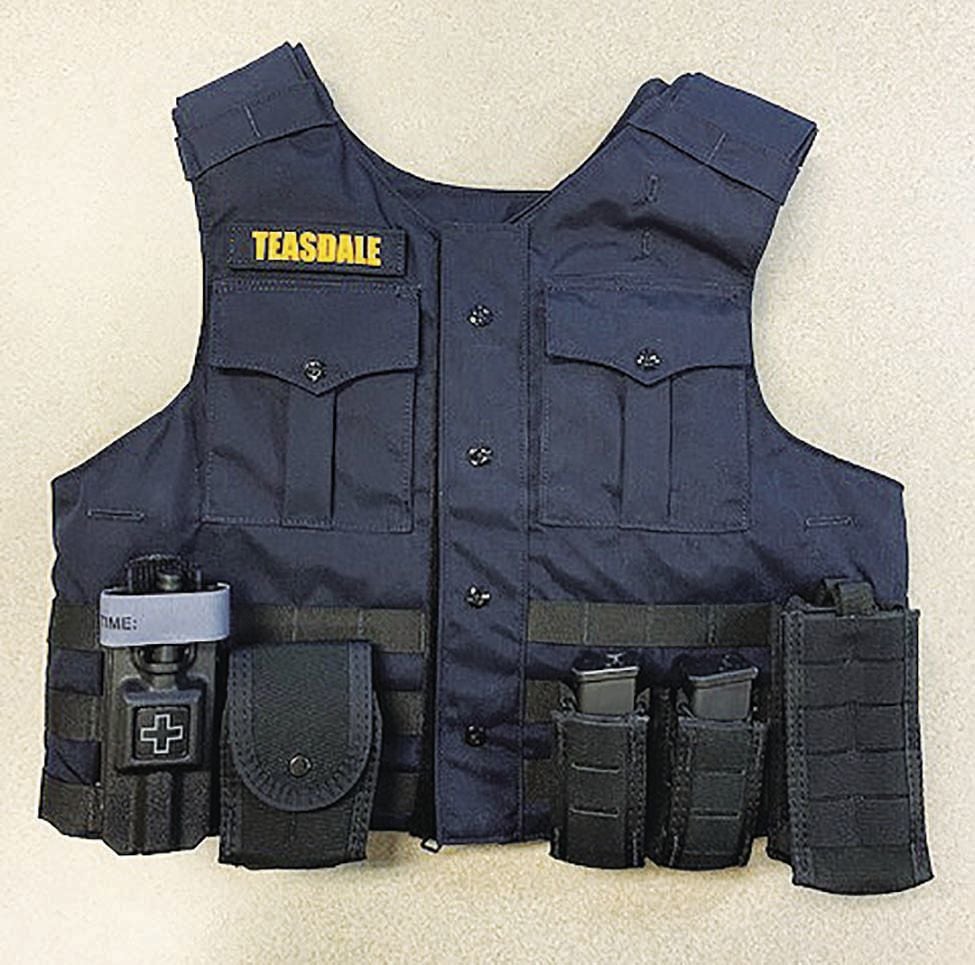 The new load-bearing vests evenly distribute gear higher around the torso, like this one for Brian Teasdale of the Sun Prairie Police Department. 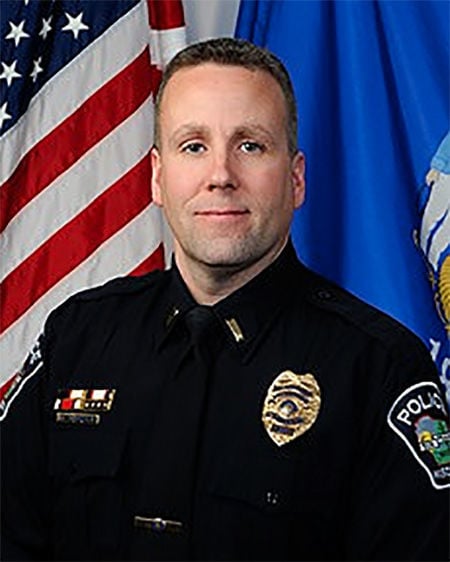 This photo featuring Sun Prairie Police Officer Hetrick shows the gear distribution on the new vests that the Sun Prairie Police Department is starting to use. The goal is to more evenly distribute gear to the vest that previously sat on their duty belt around the waist. The result is improved officer wellness by moving the weight of the equipment from the belt and the lower back to the upper torso on the vest.

The new load-bearing vests evenly distribute gear higher around the torso, like this one for Brian Teasdale of the Sun Prairie Police Department.

In an effort to address one area of officer wellness, members of the Sun Prairie Police Department now have the option to wear load-bearing vests to move their equipment from their belts.

The result, according to a UW-Eau Claire study and a local physical therapist, should be improved officer wellness and less lower back strain.

During his tenure as Acting Sun Prairie Police Chief, Brian Teasdale sought to address some of the more prominent areas of officer wellness, both physically and emotionally, and back pain was one of the areas that frequently arose — even from Teasdale himself.

“The strain on the hips and lower back is tremendous. The duty belt is designed to carry essential equipment that is needed to carry out our public safety responsibilities,” Teasdale said.

The weight carried on the belt is significant and officers suffer the impact of that weight through pain in the hips and lower back.

“I have been policing in Sun Prairie for nearly 25 years and I have significant pain in both my hips and lower back,” Teasdale said.

Studies like the 2017 UW-Eau Claire study that used Eau Claire Police Department officers demonstrated that there is a connection between the duty belt and this pain, according to Teasdale.

“I want to assure that the officers that are coming through the profession now are educated on the topic and we are doing all we can to help with their physical care,” Teasdale said. “We owe it to our staff and community to learn from our past in order to improve our future.”

Kevin Wait from Capitol Physical Therapy in Sun Prairie recently made a presentation to the department about how officers could better use their hips instead of their backs.

“Along with the training, we committed to looking at redistributing the weight that is on the duty belt to benefit the hips and back area,” Teasdale said.

“Load bearing vests allow the weight to be removed from the waist line and redistributed more evenly to the torso area. This results in less strain on the hips and back. Equipment can be removed from the back of the belt to allow for improved comfort and posture while on patrol.”

The UW-Eau Claire study — conducted with the Mayo Clinic and the ECPD — demonstrated the effectiveness of using load-bearing vests, with officers rating pain and discomfort significantly higher while wearing duty belts compared to wearing the vests. SPPD’s vests will be purchased through Top Pack Defense in Sun Prairie.

“Based on these data,” the study reads, “it seems the load bearing vests are more effective at evenly distributing the weight of police equipment and put less strain on the hips and lower back compared to the traditional duty belt.”

Despite the benefit to officer wellness, the vests have one drawback.

“The problem that we wanted to stay away from though, if you look at this — that looks pretty tactical,” remarked Lt. Kevin Konopacki of the SPPD. “And it could look very militaristic and we’re sensitive to that, because again, we don’t want [a military perception], especially with everything that’s going on in today’s world with some of the issues some police departments are seeing with their communities.”

Because some of the vests are already starting to hit the streets with SPPD officers, the department felt community outreach — similar to the Eau Claire Police Department implementation — was the best way to inform the public. That’s something Teasdale agreed with, too.

“I feel that it is important to inform our community members of changes like this that may impact our appearance,” Teasdale said. “We police in partnership with our community. That relationship is based on trust and it is critical for people to understand the driving force behind this kind of change. Sun Prairie is a very special place to police and the relationship we have with our community is unmatched.”

But to Wait, the vests are a no-brainer for the SPPD.

“So this is really, really cool that they found a significant difference and obviously kind of validates the functional purpose,” Wait said, referring to the vests.

“And it makes total sense,” Wait added. “I mean, if you’ve got all of the weight up on your chest versus your belt, it’s going to automatically unload your back a whole lot more. You’re so much more powerful and much more functional using things through your trunk than you are through your hips and through your low back.”

Although officers currently have the option to phase in the vests to their uniforms, Konopacki said he hopes most officers will transition to the vests.

Wait said it has to be much easier on the lower backs of officers not having to sit with all their equipment on their duty belts. It also prevents a large amount of equipment from being displaced while running after suspects.

“The other thing this [study] addresses nicely that would be a concern is just range of motion and function or just the use of it,” Wait observed, referring to the vests. “[The study] comments that the spine range of motion, arm range of motion, like it’s not so bulky that they can’t move. So that’s the other positive thing.”

Teasdale said he hopes to see more officers embracing the vests for their own health.

“I would expect to see more officers moving to this option as we move forward. Duty belts are still being worn as the duty pistol and Electronic Control Device (Taser) are prohibited from being worn on the vest,” Teasdale said. “Our training teams recognize that there are adjustments that need to be made in the training environment to refine muscle memory when accessing the equipment that has been moved.”

“It is a part of the evolution in our profession and we are committed to moving forward as always,” Teasdale concluded. “Continuous improvement will always be a priority for our organization.”