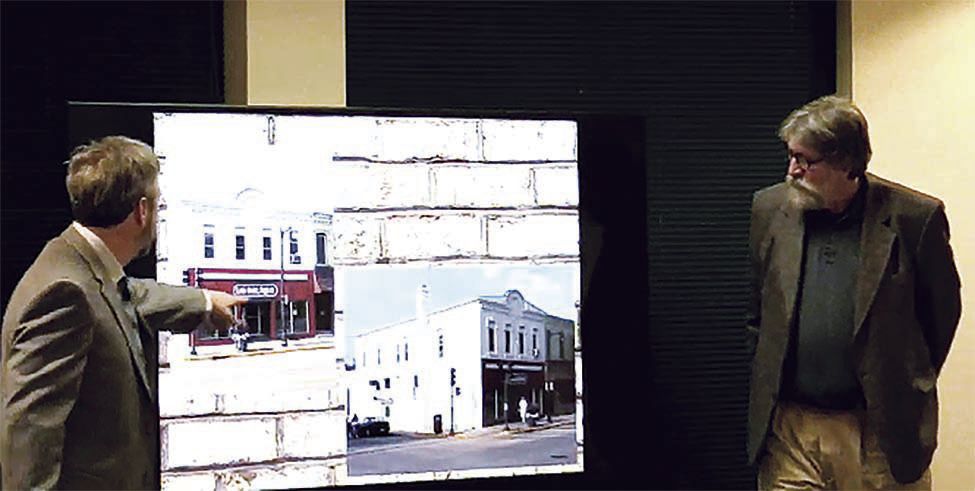 In early March, Adam Bougie (left) and Joe Powelka explained the architectural features of the Bougie Building, which is designed to be reminiscent of the former Glass Nickel building at the corner of Bristol and Main in downtown Sun Prairie. A final development agreement is scheduled to be presented to alders on at the June 16 city council meeting, but the building will still have to go through plan review and building design approval by the plan commission and city council. 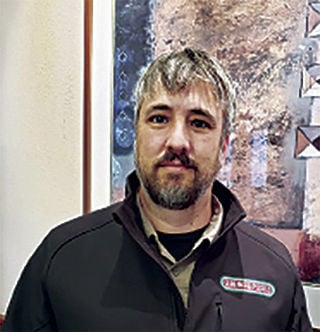 During the June 2 Committee of the Whole meeting, alders approved a development agreement for Adam Bougie of Glass Nickel Pizza to redevelop 402 E. Main and 111 Vine St.

The agreement, which includes a request for tax increment finance (TIF) assistance, specifies terms that will serve as the basis for a final development agreement with the terms, conditions and expectations for both the developer and the City of Sun Prairie in the proposed project.

The project, previously presented to the Community Development Authority (CDA) Advisory Board as The Bougie Building, includes a new home for Glass Nickel Pizza on the bottom floor of the development. According to materials previously considered by the CDA board, The ground floor of the building would provide approximately 5,600 sq. ft. of restaurant/community space and an exterior patio for outside dining.

The finish level for the residential units would be quality, with durable materials selected. Both the ground floor of restaurant/community space and the first floor of residential space would be Americans with Disabilities Act (ADA) accessible.

As part of the agreement OK’d by the Committee of the Whole, Bougie agrees to construct a mixed-use commercial and residential building, not smaller than 15,000 sq. ft., that conforms to the site plan and architectural plans approved by the City prior to closing. The agreement also requires that Bougie complete footings and foundation no later than Dec. 31, 2020, with an occupancy permit for the completed project issued no later than Dec. 31, 2021.

Bougie fails to meet either of the above milestones, he’ll pay $250 per day of delay to the city as liquidated damages, capped at $360,000. Deadlines may be extended due to any disaster or other force majeure, according to the agreement.

The city is also agreeing to reimburse Bougie for the cost of removing and disposal of contaminated soils, up to $30,000.The city will also provide TIF payment to Bougie as follows:

Subject to the stablishment of TIF 14, beginning in the first calendar year following the year in which an occupancy permit is issued for the project, and for eight years thereafter (for a total of nine years) the city will pay 75 percent of the Actual Tax Increment generated by the project to Bougie, up to a cumulative maximum of $357,410.

The city’s obligation to provide Tax Incremental Financing to Bougie is contingent upon the creation of a new Tax Increment District (TIF District 14) that includes, as eligible project costs, the payments to Bougie. The new TIF 14 is also expected to include properties near the Main-Bristol intersection that are owned by Sun Prairie developer Dave Baehr.

Part of the pre-closing contingencies in the agreement requires the city to create TIF District 14, and complete a certified survey map combining the 402 E. Main and the 111 Vine St. parcels.

The agreement also emphasizes that the development does not include any land swap for property at Main and Bristol streets: “Neither this action tonight or formal approval a development on June 16th are intended to formally address any traffic, parking or operational concerns with this project. These concerns will be formally addressed through the site plan and zoning approval process yet to come. Both staff and the developer are aware of these concerns, and the developer has expressed his willingness to work with the city to address them during that process.”

A revised, final version of the development agreement with Bougie is scheduled to be presented to the city council on June 16, according to City Economic Development Director Neil Stechschulte.