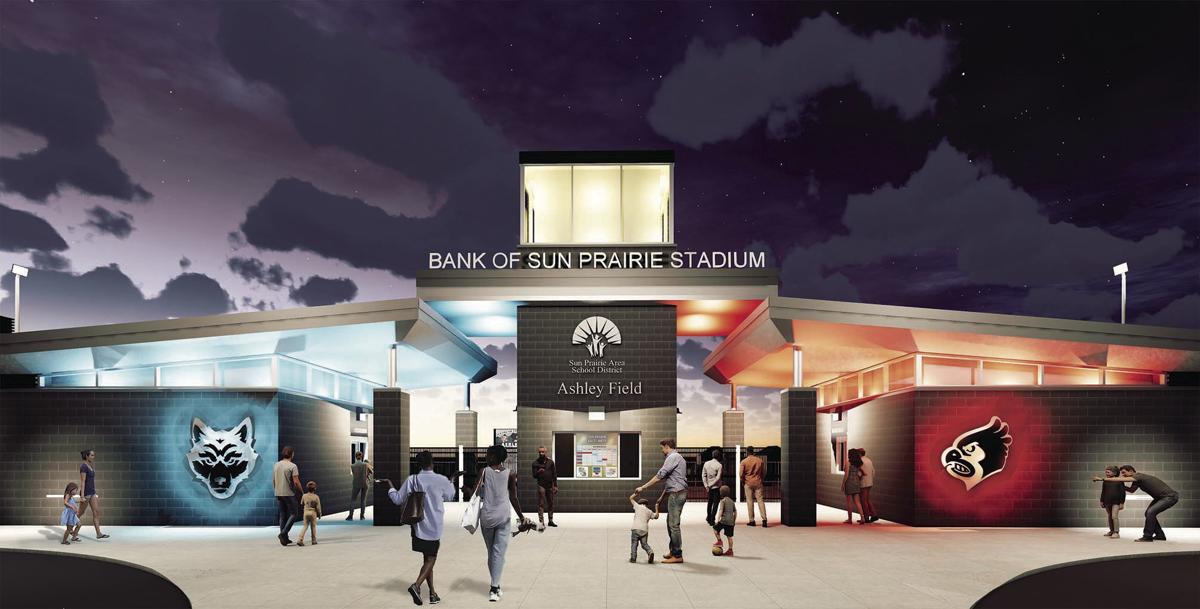 This rendering shows the entry plaza for the new Bank of Sun Prairie Stadium at Ashley Field at night. The Sun Prairie School Board voted unanimously on Monday May 11 to approve awarding the naming rights to the bank in exchange for a $250,000 contribution form the bank. As part of the agreement, the bank will also be constructing student-staffed branch banks inside both Sun Prairie East and Sun Prairie West high schools at the bank’s expense, Saron said on Wednesday, May 13. 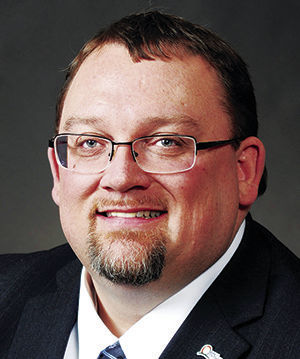 The school board vote occurred the same day as the Sun Prairie Area School District (SPASD) announced the proposed sponsorship agreement with the Bank of Sun Prairie.

Before casting the vote, board members praised the bank and its local leadership for the sponsorship.

Board member Carol Albright made the motion to accept the donation “with great joy.”

“These are exciting times here,” said board member Marilyn Ruffin, who added that Bank of Sun Prairie has been a valued supporter and partner of the SPASD for a long time. She also said she had concerns about others making the same proposal, but that she was glad the Bank of Sun Prairie was making the donation. “I love it. Thank you.”

“Just a great partnership with the Bank of Sun Prairie,” remarked board member Bryn Horton. “Great to see.”

“It’s great to have someone in our own neck of the woods doing this,” remarked board member Caren Diedrich. “That’s grand.”

“We could not be more excited to present you . . . with our proposal this evening,” remarked Bank of Sun Prairie President and CEO Jimmy Kauffman on a video announcement played during the board meeting. Noting that just 850 people people lived in Sun Prairie when the bank was founded in 1897, Kauffman noted that times have definitely changed in the growing community of Sun Prairie.

Referring to the new stadium as a “gamechanger” for downtown Sun Prairie, Kauffman added, “We feel it’s important for us to step up to make this the best multipurpose venue in the state.”

“On behalf of the bank . . . we’re super excited,” remarked Jeff Tubbs, a member of the Bank of Sun Prairie Board of Directors who was attending the virtual meeting to help update the school board on the progress of two Findorff Construction projects — the new Sun Prairie West High School and the renovation of Ashley Field including the new Bank of Sun Prairie Stadium.

“The district is excited to have one multipurpose stadium serving both high schools,” remarked Superintendent Brad Saron in a report to the board. “One stadium symbolically serves to unify the two high schools and more importantly serves as a unifying venue for the entire Sun Prairie community.”

Saron added that schools are the “heartbeat and soul of the community,” and are rooted deeply in history and tradition and “it is exciting to have a business organization with a history as rich as the Bank of Sun Prairie step up with a partnership proposal to expand and build upon that history with this naming rights opportunity.”

“The Bank of Sun Prairie and District have had a relationship for many decades!” Saron wrote in his report. “The bank’s generosity in the ongoing partnership has allowed the district to maximize taxpayer dollars that can be channeled directly into the classroom while minimizing overhead costs.”

Saron said during the May 13 taping of KSUN’s “Talk of the Town” program that the money would be used to help upgrade the new stadium’s video scoreboard. The new stadium is expected to be completed in time for a late August home football opener against Hudson High School, then serve as the home for the new Sun Prairie East and Sun Prairie West high school football, soccer and lacrosse teams. The Bank of Sun Prairie Stadium at Ashley Field will also likely be home to school-related events such as outdoor music concerts, the annual Flags of Freedom Field Show and more.

In a related item, the board altered its donation criteria so that any donation more than $100,000 will now be handled directly through the Sun Prairie School Board, with any donation of $100,000 or less being handled by the Sun Prairie Education Foundation (SPEF). A report to the board noted the SPEF’s “A Foundation Worth Building” 2010 naming rights campaign has to date generated $473,500 for the SPASD as part of naming rights sold for classroom and other spaces in Sun Prairie High School and other educational facilities throughout the district. The same process will be used to help name or sponsor instructional spaces at the new Sun Prairie West High School, according to the revised donation policy.